An Interview with Soyinka Rahim

Soyinka Rahim is a Grassroots Spiritual Practitioner and the founder of BIBOLOVE, which stands for breathe in, breathe out love. She is a performing artist, a conference weaver, and an InterPlay leader from Oakland, California. Here, she shares how her dance history informs her work as a spiritual facilitator, how she combines breath, affirmation, movement meditation, and sound as part of her spiritual practice, and why it’s more important than ever to take the time to breathe. 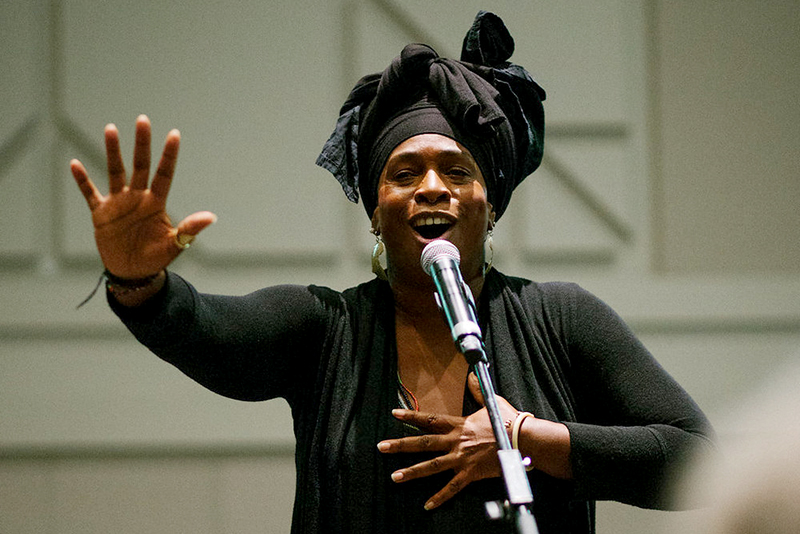 Can you first share a little about your own dance and movement history and what/who influenced you as a dance artist?

Thank you to my mother, Ayisha, for raising me on the foundation of dance, art, Afrocentric world religion, and power to the people. She also encouraged me through impromptu home performances using dance and other art forms. In junior high school, I studied ballet with Lynette DeFazio. I also studied and performed Ghanaian West African with CK Ladzekpo and with Malonga Casquelourd and his Congolese company. I also danced with José Lorenzo’s Samba Batucajé. In fact, I was dancing in all three companies at the same time. I was a TA for Paula McCallum at Berkeley High School for her modern African dance class. I led warmups, combinations across the floor, and choreography. Dr. Linda Goodrich also insisted I lead the warmups and across-the-floor combinations in her jazz classes while I was still in high school. I also danced with Halifu Osumare’s Citicentre Dance Theatre in Oakland. Halifu ran the Everybody’s Creative Art Center where I took jazz classes. I remember feeling frustrated that I had to lead the class when I showed up to take class, but I can see how it laid the foundation of what I do today as a leader and facilitator of breath, movement, sound, and meditation.

I’m also thankful to Alonzo King for giving me a two-year ballet scholarship when I was in my mid-20s. That opportunity saved me from the streets and drugs. He was the person in my life who said, “I got you, come and dance.”

I want to give thanks to the children in the elementary schools, summer camps, and youth authority where I led movement as a teenager and a young adult. I founded and directed Our Thing, a summer camp in the studio that I built in the backyard of my childhood home and ran for seven years. I also created, directed, and choreographed an original modern-day folklore called An Altarpiece to Alter Peace: an intergenerational multimedia performance art piece for peace. It was about our connection to earth, wind, fire, and water, and it supported conversations around families building altars in their homes.

I also want to thank InterPlay for reminding me to trust my body wisdom and for encouraging me to continue dancing, singing, and telling my stories. InterPlay has supported me in creating an album comprised of a compilation of music I’ve written that describes my connection to spiritlove. It’s produced in collaboration with Percolations, a jazz fusion band out of Seattle. I also just got commissioned by Abbey of the Arts, a Christian-based organization, to create a song honoring the Black Madona, part of a compilation of music celebrating Mary.

Finally, I want to thank Therese Taylor-Stinson for inviting me to write a chapter entitled “Home Loss and Gains” for her book Ain’t Gonna Let Nobody Turn Me Around: Stories of Contemplation and Justice. Despite my insecurities around my academic lack of achievement, she said, “Just write the chapter and I’ll decide.” I feel very fortunate to be in her compilation.

What is a Grassroots Spiritual Practitioner?

I’ve had many opportunities to cofacilitate with PhDs and MFAs. I wanted letters behind my name as well, so I ordained myself as a GSP: Grassroots Spiritual Practitioner. I gave myself permission to show up with my personal experience as a valid student and teacher, allowing my GSP self to guide my GPS.

As a Grassroots Spiritual Practitioner, I am committed to practicing being of service to a love supreme in all my relations by cultivating peace, love, joy, happiness, health, grace, and ease. 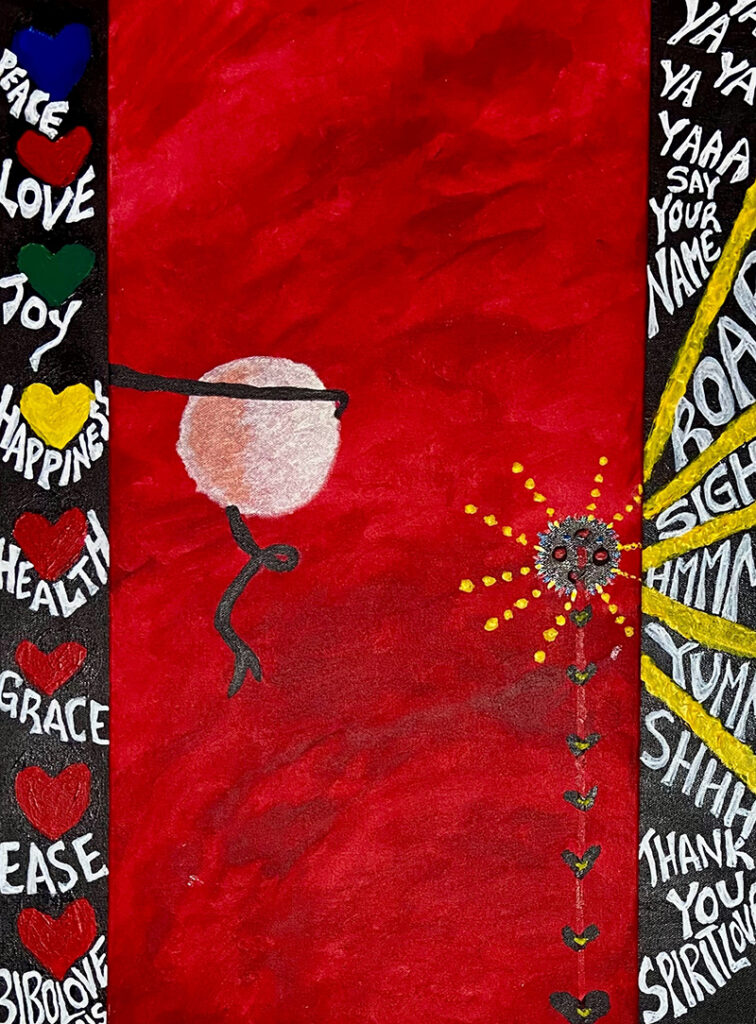 A GSP is a person who understands that we are all a manifestation of a love supreme, a frequency running through and around each of us regardless of religion, sex, class, or race. A GSP is committed to a personal practice of thanking, speaking, and acting from a position of peace, love, joy, happiness, health, grace, and ease, while growing through one’s personal challenges and the world’s challenges.

How would you describe BIBOLOVE to someone unfamiliar with it?

BIBO is an acronym: breathe in, breathe out.

I say to myself every day, “BIBOLOVE Soyinka, breathe in love, Soyinka, breathe out love, Soyinka. Peace, love, joy, happiness, health, grace, and ease, Soyinka.” BIBOLOVE continues to remind me and others of our superpower, which is love. Each time we have an opportunity to speak the word “love” out loud with good intentions, we can activate frequencies, vibrations, and energies that run through our hearts and souls to empower us to love and be loved. I believe sound and movement feeds a frequency in a mystical and magical way that ripples out into the universe for change.

I added the .us after, so now it’s BIBOLOVE.us, because I believe it’s going to take all of us to create new systems.

What was the process of developing BIBOLOVE.us?

I was drowning; I had lost my home and wasn’t connected to dance. I eventually found InterPlay, who thrust me right into cofacilitating and incorporated me into their process. I asked the spirit to give me a lifeline, and the spirit said, “Breathe in, breathe out, Soyinka. BIBO.”

I promoted BIBO for two years. Then someone started a business called BIBO right in the vicinity of where I had been promoting BIBO with stickers. I went in to introduce myself and to share that I had been promoting BIBO as an acronym for “breathe in, breathe out.” I thought we were on the same vibration, but unfortunately, the conversation wasn’t pleasant. I remember saying to myself, “BIBOLOVE Soyinka, breathe in love, breathe out love, Soyinka.”

The BIBOLOVE evolution was ignited. 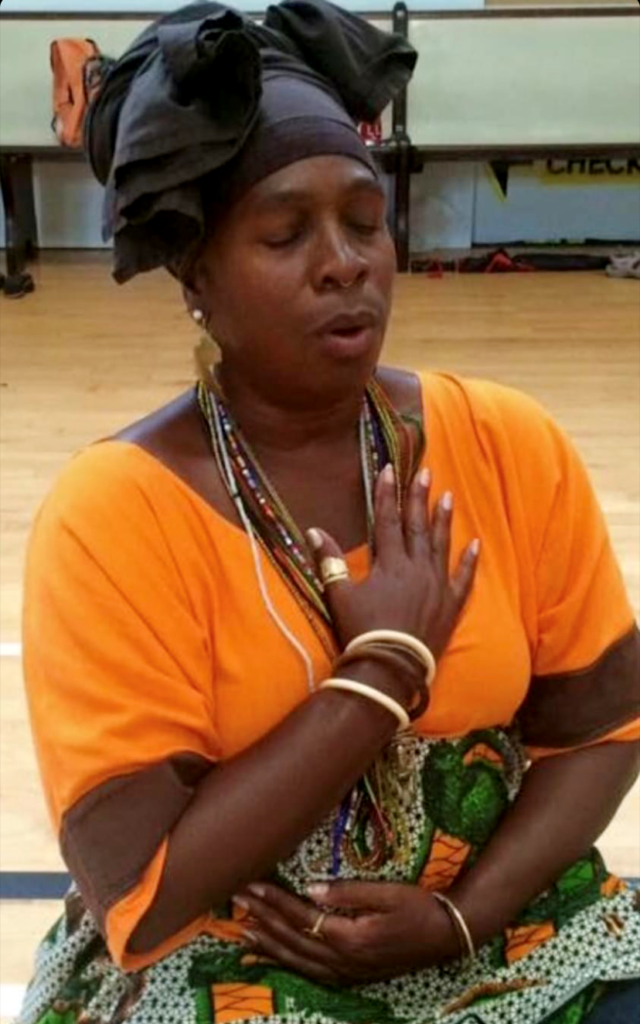 How does BIBOLOVE.us relate to your movement practice?

What types of settings have you practiced BIBOLOVE.us in?

I call myself a conference weaver. I have woven BIBOLOVE practices and philosophies through organizations like Facing Race, Parliament of the World’s Religions, Women’s March conventions, and InterPlay, as well as healing rituals, churches, anniversaries, universities, celebrations, and family reunions. I’ve had an opportunity to bring breath, affirmation, and movement meditation to those types of organizations. It releases nerves and brings ease to the nervous system. Each of the breaths have a movement and sound with it.

When I do this in community, it becomes a simple collective dance for us to connect. Even for those who don’t think they are dancers, they dance. It’s empowering to the collective body.

What are some personal take-aways or lessons you’ve learned while practicing BIBOLOVE.us?

The creation of BIBOLOVE has given me a legacy to live with confidence and courage to hold sacred space for others as a spiritual director, which in return supports me to love and be loved.

The seven-word daily affirmation – peace, love, joy, happiness, health, grace, and ease – helps align the seven chakras, which I recite every day several times for myself and for the frequency that connects me to all things. I ask the spirit to guide me in the BIBOLOVE evolution every day.

Do you envision the BIBOLOVE.us evolution in the future? If so, in what direction or capacity?

I would like to teach the affirmation movement meditation to leaders and facilitators to continue the legacy of BIBOLOVE.us.

I’m also visualizing the BIBOLOVE evolution as an art gallery and creative space to invite facilitators to collaborate with the BIBOLOVE practices and philosophy through improvisation, storytelling, poetry, visual art, moving, singing, writing… a space for people to tap into their creative voice regardless of if they consider themself an artist or not. Art is our birthright; we are created by a creator to create. 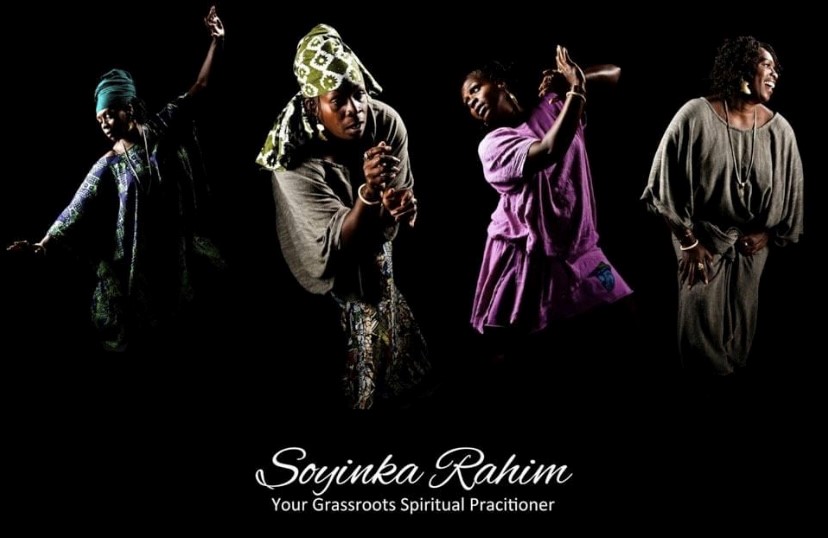 3 Responses to “Using Breath to Connect with Spirit”