An Interview with Dominic Moore-Dunson

Dominic Moore-Dunson is a choreographer based in Akron, OH. His current work, inCOPnegro, explores how he will one day talk with his young son about police violence toward the Black community. inCOPnegro consists of a podcast comprised of interviews with members of his community, including Black cops, about police violence, and a full-length in-progress dance-theater piece that investigates the long-term effects of police violence on Black communities. Here, Dominic shares how he interweaves narrative throughout his choreography, how he distills the podcast interviews into choreography, and how the process informs what he hopes to share with his son one day about safety. 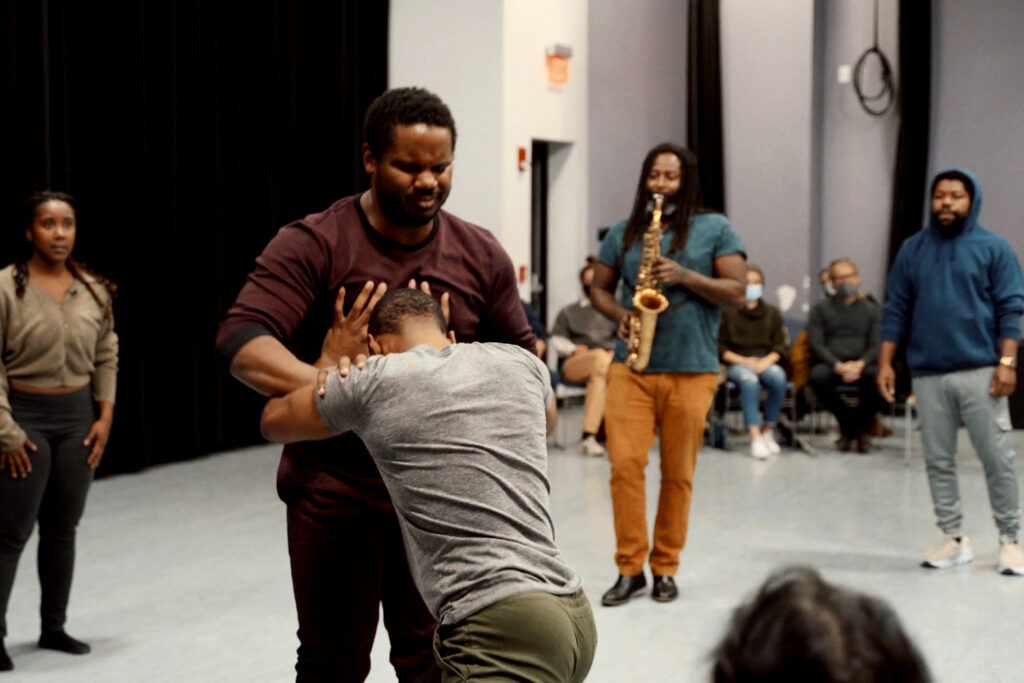 Can you tell me a little about your dance history – what shaped who you are today?

I jumped from playing division one soccer in college to dancing fulltime, which was an unusual choice. I decided I wanted to pursue dance as a career. I’d been dancing my entire life growing up. I went to dance with a company called Inlet Dance Theatre in Cleveland, Ohio, and I was there for 10 years. The mission of the company was using dance to further people: How can we use dance performance, projects, and training to help transform people’s lives? It was not dance for dance’s sake. I left in 2020 and started to make work on my own. I also had my first kid in the fall of 2020.

I created a project while I was still at Inlet called the Black Card Project about Black identity. It was my first substantial piece of work, and it was about a young boy named Artie whose mom sends him to school to learn how to be Black. By the end, the audience finds out whether he receives his Black card or not. That was the first time I got into using narrative, and I fell in love with telling stories.

I understand storytelling is a central part of your work. What does storytelling mean to you and how does it intersect with dance?

There’s a podcast I religiously listen to called You Are a Storyteller. In an early episode, the hosts ask, “Why do we tell stories?” What it comes down to is stories give survival information to others. Like in The Tortoise and The Hare, it’s about slowing down and not getting overwhelmed. Once I realized that and adopted that thinking, I started to see how stories give information to people that helps their lives in some way.

Story doesn’t always mean, “Once upon a time.” Stories at their core have a beginning, middle, end, and a sense of journey. I don’t want to say that every time I make something it has a full narrative. But I’m always thinking about the thesis of my choreography: How is it clear what I’m saying so people can take in that information?

Can you tell me about the piece you’re currently working on, inCOPnegro, and what the impetus for the piece was?

When I left Inlet Dance Theatre, it was 2020, so obviously we were all in quarantine. Ahmaud Arbery was killed, and then George Floyd was killed. Our country erupted. Because it was during COVID and my wife was pregnant, we were watching the whole thing from inside our little ranch home in Kenmore, which is a neighborhood in Akron. I felt disconnected, but it gave me time to realize that I was about to have a Black son and I would have to explain to him one day how to interface with police. That had never crossed my mind before. I’ve had plenty of run ins with the police that were unpleasant, but I’d figured it out by myself. It’s how a lot of Black people do it. There’s not a guide for how to deal with police as a Black person, but I feel it’s important to provide some level of guidance to my son.

I started talking to people, asking, “Do you talk to your kids about police?” I got this overwhelming response that you tell them just to get home. I was also raised that way, but I decided that answer wasn’t rich enough, deep enough, or helpful enough. So I decided to turn it into a project interviewing people. The year before, I went through a course in Akron about how to make a podcast. I realized I could use the podcast format as a way to archive all these interviews, which I would eventually use to create the dance work itself, but the podcast is its own piece.

Although I’ve been doing this work since 2020, somewhat prophetically in June of this year, Jayland Walker was killed by police here in Akron. He was killed 10 minutes from my house. He was unarmed and shot at 93 times by five police officers. He was hit 46 times. Now there’s an investigation, but nothing like this had happened in the city before. There’s been protests and marches. Now we’re literally sitting in the wake of what happened and trying to find what to do next. Before this summer, it was a national conversation and now it’s close to home. How does that show up in the movement of the piece? 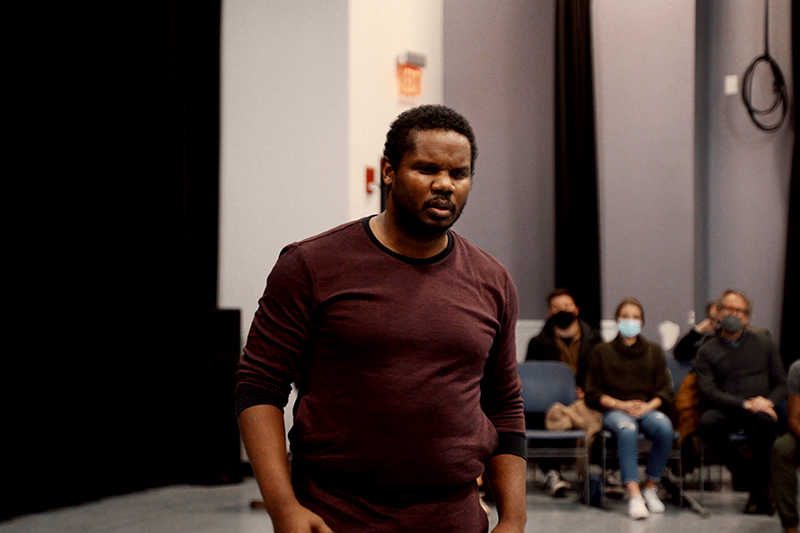 What is your choreographic process like, and how does it relate to the podcast?

I started the podcast first. I did 50-some interviews before I got into the studio in June 2021 with another male dancer, a female theater artist, a male hip hop musician, and a male jazz musician. We started by listening to the interviews and figuring out how to dissect people’s words and respond in our own art forms. We would listen to the space between the interviewees’ words and the cadence of their voices. At the same time, we got a sense of how to work together and kept making things in response to the interviews.

We realized that what’s so captivating about the interviews is hearing the emotion of someone’s voice but not being able to see them. We talked about how to physically capture emotional truth: we might not be telling their story verbatim, but we’re sharing the emotional truth behind the story. That was tricky, especially at first. From there, each one of us started creating characters. We ended up dropping the female character from the cast because we realized that the conversation about Black women and police is a whole other topic that needs to be looked at by itself instead of grouped into this project. Now it’s a quartet with four guys.

I started naming the characters. Mine is called the Mourner. He’s the person in the community who is not just mourning what happened but the fact that it’s happening across our country all the time. We have another character called the Untrusted. In our city, Black men between 17-25 are killing each other because of gun violence. The other dancer is playing this character who is untrusted by everyone, the police, even people who look like him. What does that do to a person? The hip hop musician’s character represents Black police officers. We call him the Questioner because he questions if he’s the villain or the hero. The jazz musician’s character is called the Enlightened. He is the educated Black man who never thought police violence would affect him. How do these four characters intersect with one another, and what happens?

Being in the studio has made me understand how to better facilitate the questions when I interview people. I’ll be in the studio, and we’ll hit this moment when I think, “I don’t know what to do here.” Then in my next interview, I’ll start asking questions to help me understand what needs to happen in the piece. So when I talk to a Black cop, for example, I’ll ask, “Do you often feel like a hero or a villain?” Something they say will help me in the studio.

One of the things about the podcast I’m most proud of is it very easily could have been a two-way podcast with me doing interviews. Instead, the hip hop musician in the piece is also the composer for the podcast. There’s music throughout every interview that underlays and enhances what’s being narrated. 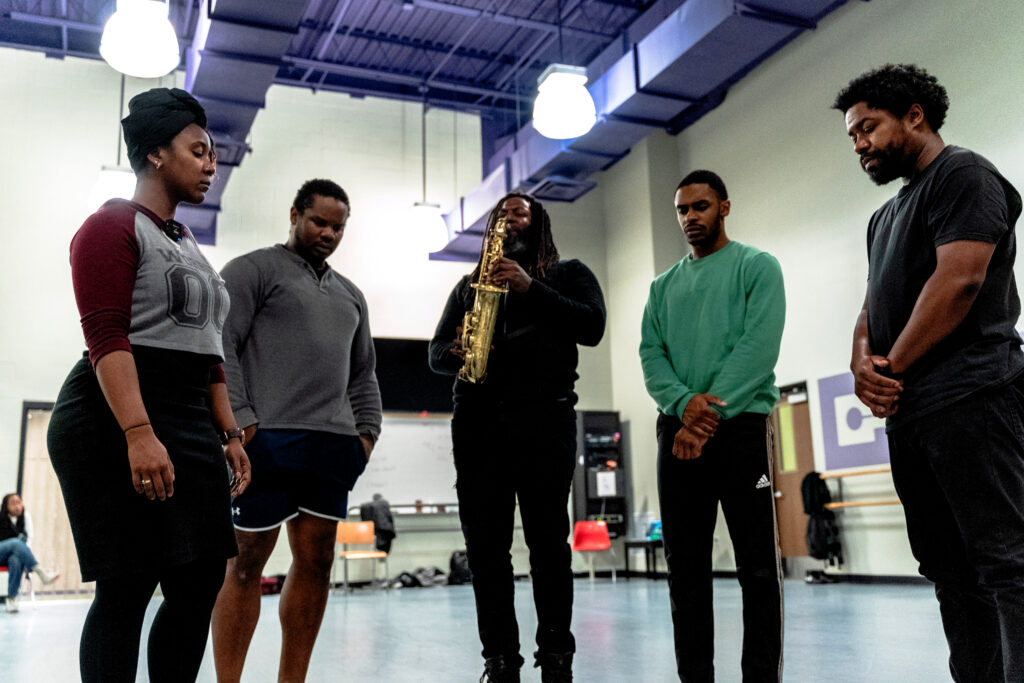 I’ve come up with this idea that the very last episode of the podcast will be the dance piece. Hopefully, people will have listened, and then they’ll come to the show and see how it all makes sense and concludes the podcast. We’re looking to premier the work during the week of June 26, 2023, the one-year anniversary of when Jayland Walker was murdered.

What do you hope audiences and listeners take away from inCOPnegro?

Talk to your kids. Have difficult conversations when the time is right. By the time my son is four, I’ll be able to have a conversation with him about the police. It will be scaled appropriately. But I can start then. I don’t have to wait until he’s 13.

The more obvious thing for our non-Black friends is to understand that police violence against Black bodies happens everywhere. I confess that even though I’ve been doing all this work, a small part of me held on to the belief that this could never happen in Akron. We’re a small town; the population is always declining. Everybody knows everybody. I thought it would never happen, and when it happened, I realized this cancer goes anywhere it wants to. Until we’re all collectively asking for transparency and accountability from police, we’re just going to see our Black communities throughout the country in this same situation over and over.

The only reason any reform happened after George Floyd is all the white folks got involved. We need to have tough conversations and do them in a way that brings people in, so everybody feels like they have a seat at the table. One of my big goals is to have the chief of police show up at the show next June. We’re premiering it five minutes away from the precinct. I’m going to try my darndest to get them to come. In a perfect world, I would love to have a showing for the police department. My hope is that once this piece is made, it can be used as an asset for the community. 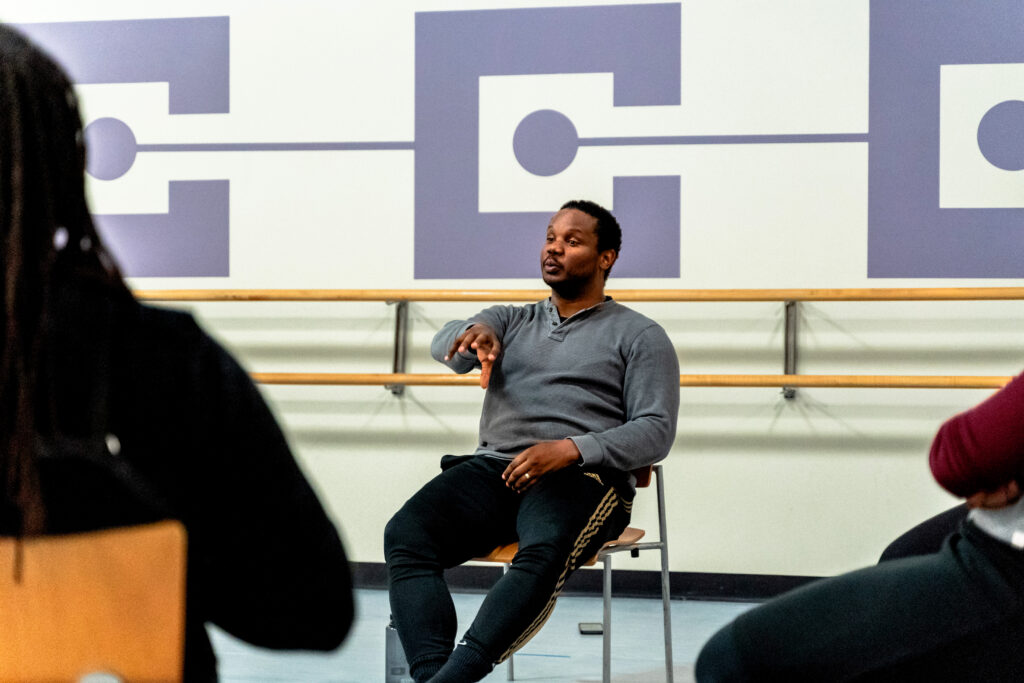 Amid all these podcast interviews and choreography, do you have a sense yet of what you’ll share with your son one day?

One of the images that won’t leave my head that an interviewee said recently is, “When you’re Black, someone shot off a gun the moment you were born. That thing is on a trajectory toward you your entire life, and that bullet will eventually find you.” It’s not unlike when Martha Graham said dancers die twice, once when they stop performing and once when they stop living. For Black people, that bullet is the understanding you’re not safe, you can’t trust people, and the world isn’t what you thought it was. This realization hurts more than actual death. It’s going to hit you. Once it hits you, what do you do with it? You can let it make you the Untrusted or Questioner. Or you can bury it and not let it separate us as a community.

That’s the imagery that’s stuck in my head. The trajectory of sharing with my son is talking about what we do when the bullet hits us. The bullet could be being pulled over and roughed up, or arrested and under the police’s mercy. The bullet can represent so much. This image is driving my monologue to end the piece.