An Interview with Rujeko Dumbutshena

Rujeko Dumbutshena is a Zimbabwean-born dancer, pedagogue and performer who focuses her practice in neo-traditional and contemporary African dance. She is currently an Assistant Professor in the School of Theatre and Dance at the University of Florida where she teaches courses in Contemporary African and African Diasporic Dance Practices. Here, Rujeko shares how teaching at the university level has always been a facet of her dance career, and how she has seen major shifts in how Afro diasporic dance is valued within college dance curriculums over the past couple years since the Black Lives Matter protests.

This interview is part of Afro Diasporic Dance in College Settings, a series of interviews with dance professors who teach Afro diasporic dance forms in American college dance programs. 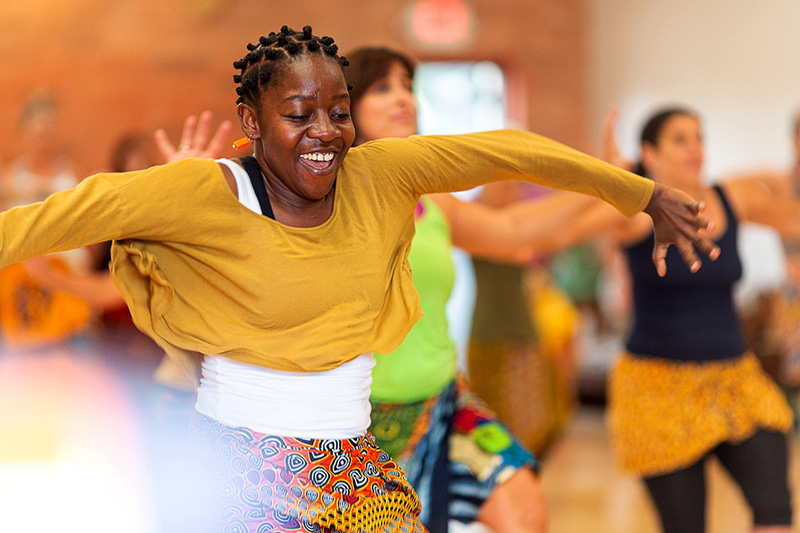 What was your introduction to dance and what have been some highlights or pivotal moments in your dance career?

I was introduced to dance when I was six years old and living in what was Rhodesia at the time and is now Zimbabwe. It was still Apartheid. My parents sent me to a private elementary school. Integration in schools had just started, so I was the only Black student in an otherwise all white elementary school. It was challenging to say the least; most of my teachers were very racist. However, the school offered ballet classes and my ballet teacher accepted me. She allowed me to excel and gave me the encouragement to keep going. It was really enjoyable for me. That was the beginning of my dancing.

I didn’t dance through high school because I was told it wasn’t something viable to do with my time. I moved to the United States to go to college and that’s where I saw examples of people with careers in dance. My BA was going to be in Visual Art, but dance started taking over. I was introduced to West African dance and Congolese dance. And then when I went home, I would practice and study Zimbabwean styles of dance. I got to go to Congo Camp, which was in California in the early 90s, where I was introduced to my mentors Mabiba Bagnae and Titos Sompa. In DC, there’s a lot of West African dance, so I was taking those classes. Eventually, I started dancing with a company called Wosa.

New York was also pivotal. I taught in New York, specifically at after school programs and dance elective courses in public schools and at Sarah Lawrence College. I performed off-Broadway and on Broadway in Fela! The Musical. I came back to New Mexico and kept teaching and choreographing.

Then I decided to do my MFA. I had intended to get my MFA at Sarah Lawrence, but I have two children who were young at that point. I ended up dropping out. When I came back to New Mexico, my children were older. I also felt at that point like I needed more structure. I felt drained from the independent artist life and career. You really have to motivate and drive your career on your own. Getting an MFA offered the potential to be a fulltime professor.

That’s one of those stories where timing is everything; the timing of finishing my MFA when many dance programs across the country were looking to diversify their programs and were looking for Afro Diasporic forms was just right. 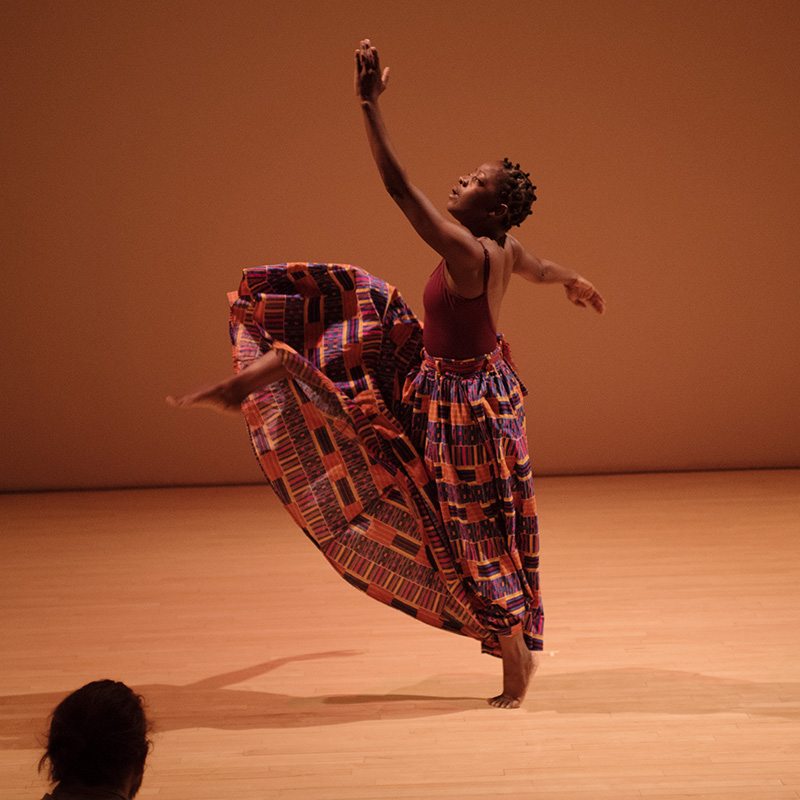 What is your current dance practice? How often do you teach, perform, and/or choreograph?

It has varied a lot. Because I started full time work in universities during the pandemic, it’s been weird. I taught for a year at the University of Washington, mostly online, and I’m now at the University of Florida. It’s really evolving because programs are figuring out what to do with my position. I started teaching level one technique class, and then with curriculum revisions there’s a need to introduce more levels, so at UW I taught level two. I also taught a number of dance studies courses at UW that focused on African dance. Now that I’ve moved to UF, there’s a big annual production that I’m responsible for being the artistic director and one of the choreographers for. That’s one of the big differences between a BA that focuses on dance studies and a BFA that focuses on performance.

I am part of the Afro-Feminist Performance Routes cohort, a cohort that Duke University hosts every other year. About six Black women dance artists from all over the world come together every other year to teach workshops, do panel discussions, and build our relationships. We’ve been doing this for some years now.

Now I’d like to dive into your perspectives on academia. How long have you taught in academia? And what courses have you most often taught?

I started as adjunct faculty in 1994. I teach African dance technique, primarily Guinea, a little bit of Congolese, and Zimbabwean. I’ve had an adjunct faculty position consistently in addition to my many other teaching positions. I’ve always felt like that was a stabilizing thing for my career. I started at the College of Santa Fe, moved to the University of New Mexico where I was for a long time, then I was at Sarah Lawrence in New York, then I came back to New Mexico. And then since getting my MFA I’ve taught at the University of Washington and am now at the University of Florida. All that experience has made me competitive, although there’s a big difference between adjunct and full time. When you move into full time positions, you have to commit to more meetings and service, and you do research. 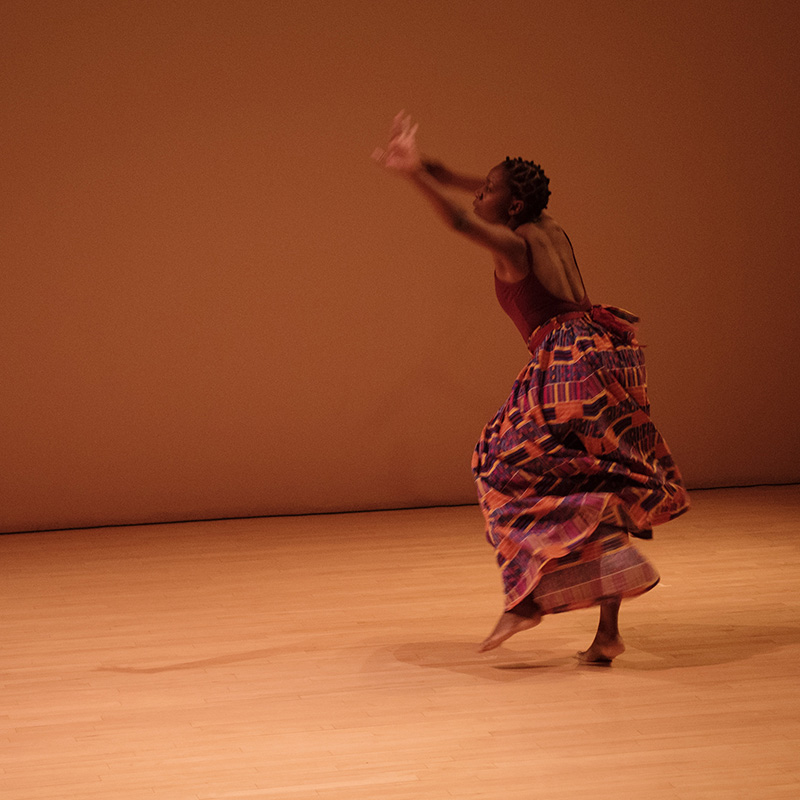 Since you started teaching in academia, have you seen more opportunities for students to study Afro diasporic dance forms?

For sure, Afro diasporic dance has always been at the bottom along with other “world dance” or “ethnic dance” forms. Just recently with the Black Lives Matter movement making people realize how racist practices exist in institutions, everyone is having this “ah ha” moment. African dance is not seen as equal to ballet or contemporary. It’s always offered in the evening times so people don’t access it or see it on the same level as other forms. There are multiple ways it’s not supported or recognized.

Where you’ve taught, are Afro diasporic dance forms treated as equally valuable as Western dance forms like ballet and modern? If not, what changes would you like to see in college dance curriculums?

In the past two institutions I’ve worked in, African dance technique is a requirement, not an elective. That’s one of the first steps in decentering Eurocentric forms is moving cultural dance forms out of electives and into requirements.

Institutions need to think about timing as well. If an African dance class is offered at 5 p.m. or 3 p.m. at the end of the day, especially if it is required and students have been dancing all day, we need to question why it is always offered at the end of the day. Why is ballet the first technique students need at 10 a.m.? It’s privileging and not diversifying the ways time is allocated for these dance forms.

Most of my students haven’t had experiences in African dance prior to my class. Maybe some have had a little bit, but most are steeped in ballet, contemporary, jazz, and sometimes competition dance. They are far removed from what African dance has to offer or knowing much about it. They are beginning their knowledge with my class.

Change takes a long time. It takes a long time to sense the changes and see the effects. I would say that the changes I’ve seen made is in the requirements, in hiring faculty that is diverse both in race and form, and in seeing how students access each form. It ends up being about people’s personal growth, recognizing their racial biases, and working continuously on creating spaces that are inviting for students of color, as well as making space for people of color to be on the faculty and in leadership positions. The gatekeeping can be subtle, especially the reasons why not. Because you have an excuse for having institutions set up a certain way doesn’t mean you should continue.

Why is it important for dance students to be educated in Afro diasporic forms? How does it create a better or more well-rounded dancer?

In order to function in a world where the culture is changing and we’re influenced by globalization, it’s important for dancers to be smart and educated. Thinking about dance purely as entertainment or as something disconnected from the rest of the world is a detriment. If you connect dance historically and culturally, you learn about the lineage of the dance you’re practicing. The majority of the time, you will learn that the dance form you are practicing is somehow related to the African continent or the African diaspora. It’s important for students to be respectful of cultural dance forms. There is a technique; it takes training. It’s a discipline like any other discipline, and it has a depth of knowledge. It can teach you a lot about the world. Growing an appreciation of different forms can also help avoid the sticky places of appropriation. Appreciating the depth offered through the practice of cultural dance forms is important. 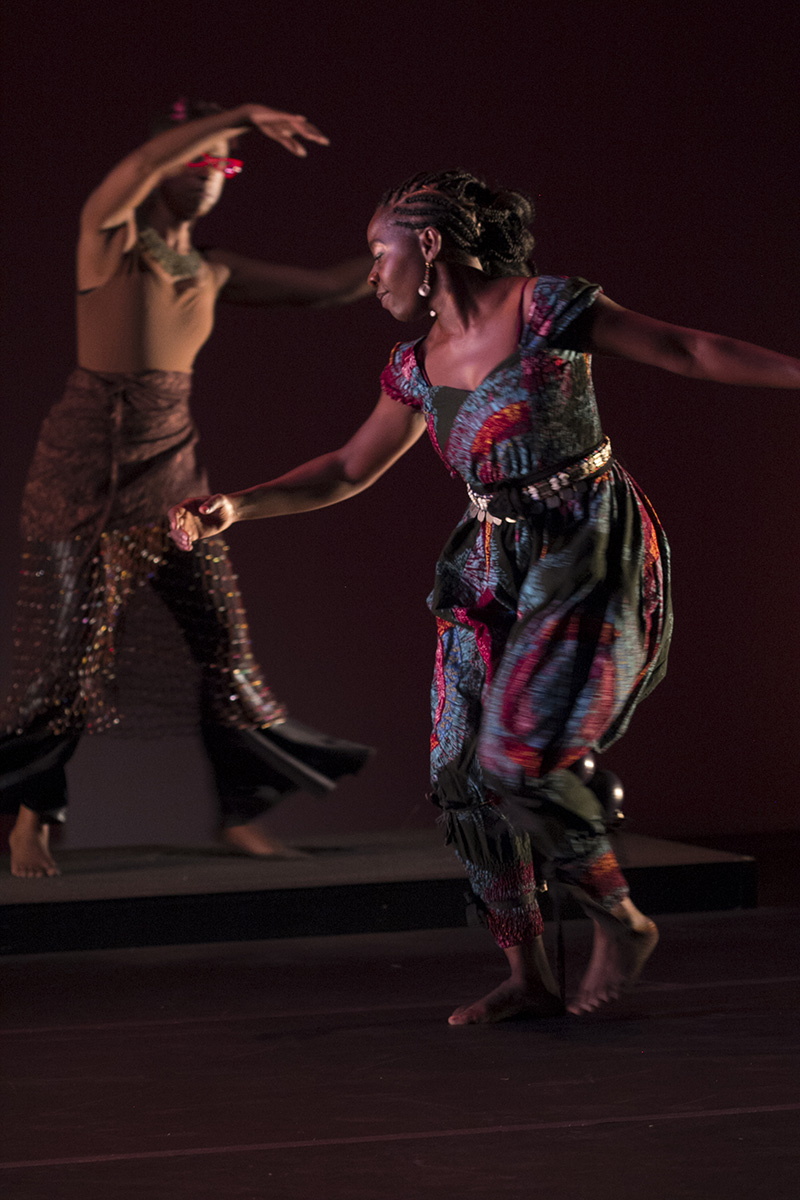 2 Responses to ““It’s A Discipline Like Any Other Discipline””