After dancing professionally, Christin Hanna took her passion for ballet back to her hometown of Lake Tahoe in 2008 to start a dance school. In 2013, she launched the Lake Tahoe Dance Festival with her longtime friend, Constantine Baecher. The dance school, festival and a variety of other performances around the year have been integrated under the umbrella of the Lake Tahoe Dance Collective, which is slowly but surely building access to top notch dance in this beautiful mountain town in the Sierra Nevada. 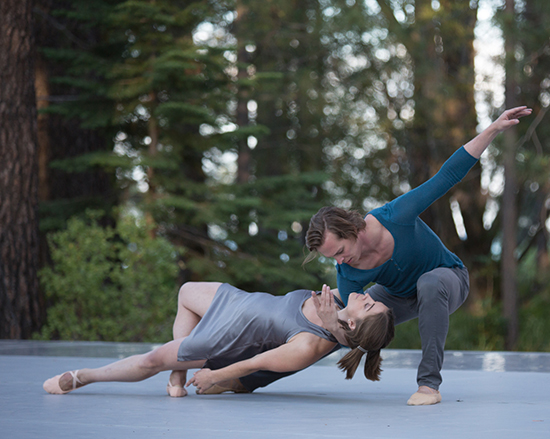 How did you find yourself living and working in Lake Tahoe?

Christin: I was born and raised here. There was a ballet class at the rec center I took when I was five, but the teacher moved away. At that point, my parents started taking me to Reno, Nevada for better training, which is an hour drive away. As the years passed, they were eventually driving me an hour each way to dance, seven days a week. This was obviously not something everybody in our community could take advantage of.

When I was looking for my next step after dancing professionally, I knew Lake Tahoe was a place where I couldn’t make more of an impact teaching and presenting dance.

Constantine: I became friends with Christin at a summer intensive at ABT in New York when we were teenagers. We have been very close ever since, and that was about 15 years ago. It was Christin who brought me out to Tahoe, and I fell in love with it the first time I was here. It’s amazingly beautiful. I grew up outside of Boston going to Jacob’s Pillow in the summers, which is a huge dance festival. There’s something about the serenity of Lake Tahoe that reminds me a lot of the Pillow. Since launching the Lake Tahoe Dance Collective, I’ve been coming out each summer to help Christin for three weeks with the festival.

Christin: I started a school here eight years ago, the Tahoe Youth Ballet, and I continue to teach intermediate and advanced levels. Otherwise, I try to get to San Francisco about once a month to check in, take class and see shows. Locally, I teach and stage work, including some of Constantine’s choreography. Mostly I teach classical ballet with an eye toward taking classicism into contemporary choreography. I’ve also started to work more with improvisation in order to get the bunhead out of the dancers.

Constantine: My dance practice is quite different. I work for Carolyn Carlson, a choreographer based in Paris at the National Theatre of Chaillot. I am on tour with her internationally about half the year. Otherwise, I help run an international choreography competition in Copenhagen in the summer. Once I finish here in Tahoe, I’ll go straight to Denmark. I also guest teach around the states. It’s a little of everything: teaching, performing or administering depending on the project. But I think that’s the way the dance world is going now. There’s a lot more upstart dancers who make their own projects happen, and that involves being a jack of all trades. The dance company model, fortunately or unfortunately, is dwindling. There was an era when that was the way to do things, but budgets are getting cut each year, so you increasingly see dance artists pulling up their bootstraps to make things happen. 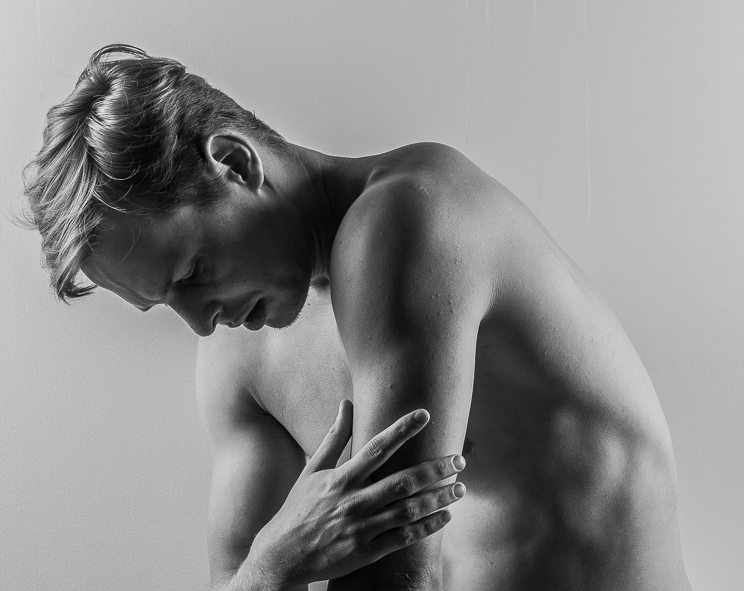 How did you go about programming the Lake Tahoe Dance Festival?

Christin: Our year-round population is happy to come out, but they don’t necessarily know a lot about dance, so I’ve always felt it’s important to show a little of everything stylistically. That way, local audiences can start to see and appreciate the difference between modern dance and classical ballet. We’re fortunate to have an ambassador from the Hawkins company come and demonstrate early American modern dance, which I’ve always felt strongly about representing. We also always include classical ballet in the program; this year we have guest artists doing the “White Swan” pas de deux. Constantine is showing a new work and Christian Burns—an improvisational dance artist in San Francisco—is also coming. So there’s a nice mix, and people walk away forming opinions about what they got to see.

How would you characterize attitudes toward dance in Lake Tahoe?

Christin: We’re a real community of athletes here; we pump out skiers like you wouldn’t believe. There’s something about how everyone here really knows their body—whether they are skiers, runners or hikers—that lends them to respect the technique and talent in dance. There really is an appreciation for the physicality of it.

We started talk-backs, because we found people didn’t know how to talk about dance or even ask questions. We opened up a conversation about how the works made people feel or, if they didn’t like a piece, why that was. Our festival has grown and we’ve seen a tremendous response in the community. Last year, we drew a total of just over 350 people to the festival.

Constantine: This is an area where there’s not a huge amount of opportunity to go out and see quality arts performances. With the rise of dance on reality television, we are showing parents and dance students alternatives to what they are seeing in their living rooms. We try to give them the resources to find out what attracts them in the broader dance world. 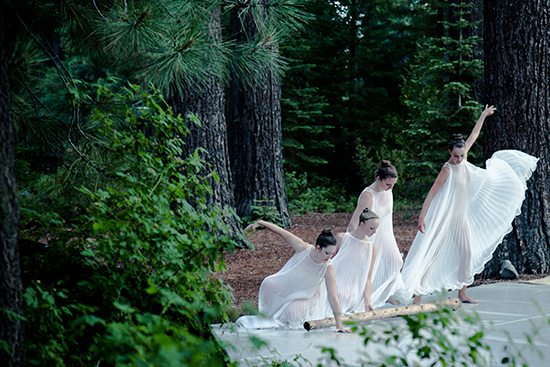 What are some of the challenges you’ve faced organizing dance in Lake Tahoe?

Christin: There’s no venue here. Since I started, we’ve performed at the high school, the convention center… really any room that doesn’t have columns in it. We’ve settled in at a museum with a large open space often used for weddings. We used to rent portable staging, but last year we fundraised to buy our own, so now we have a stage. We can even do outdoor performances. A friend of mine took over the dilapidated old movie theater in town and renovated it, so we set up our stage in the movie theater for the spring and fall performances. We’ve come a long way in that regard. There are no lighting or stage technicians here; we’ve had to build what we have with every performance.

Constantine: There are always a lot of challenges in putting together an arts festival, no matter the budget or circumstances. It’s the nature of the beast. One of the wonderful things here is that people are so open. I’ve found that in more urban places, there’s a higher chance of finding a certain jadedness or attitude of, “That’s not the kind of dance I’m into.” Here, people approach with an open mind almost everything we bring, and that makes it much easier to get excited and be fearless as a programmer. We don’t have to worry about distancing our public.

What do you perceive your impact has been on the Lake Tahoe community?

Christin: One thing they get is a beautiful evening of dance in a beautiful place. At the end of the day, that’s really the best thing we can offer. As far as the workshops, it’s great to bring in teachers who offer techniques my students otherwise might not get exposure to. My students now have established relationships with dance artists who come summer after summer, and some have even gained the confidence to go away to a summer program. We’ve given them a foundation, and we’ve really tried to hold ourselves to a very high standard despite our challenges.

How do you envision growing the Lake Tahoe Dance Collective in the future?

Christin: We’ve been looking at the concept of a residency program. It’s so inspiring for dance artists to leave the city and enjoy the serenity of Lake Tahoe, so the ultimate dream would be to keep doing what we’re doing but also offer artists a long-term residency. Let’s say an artist was awarded the residency for three years with a month every year to come and work in a studio here. And if something came out of that, then at any time during those three years they’d have a low pressure performance space. There are a lot of residency programs, but many of them expect a finished work at the end.

Constantine: It’s about trying to create a pocket where people could come and live by their artistic ethos by having the time and space to delve into what they don’t know. In New York, I’m a resident choreographer at New Chamber Ballet. There’s always the pressure of critics and high profile people coming, and no space to show a work in progress or a first draft. It’s not a head space to genuinely create in.

We are in the beginning of trying to put together a circuit of like-minded institutions. If we find like-minded administrators, presenters and residency programs, we can help artists get exposure and recognition in addition to what we have to offer. 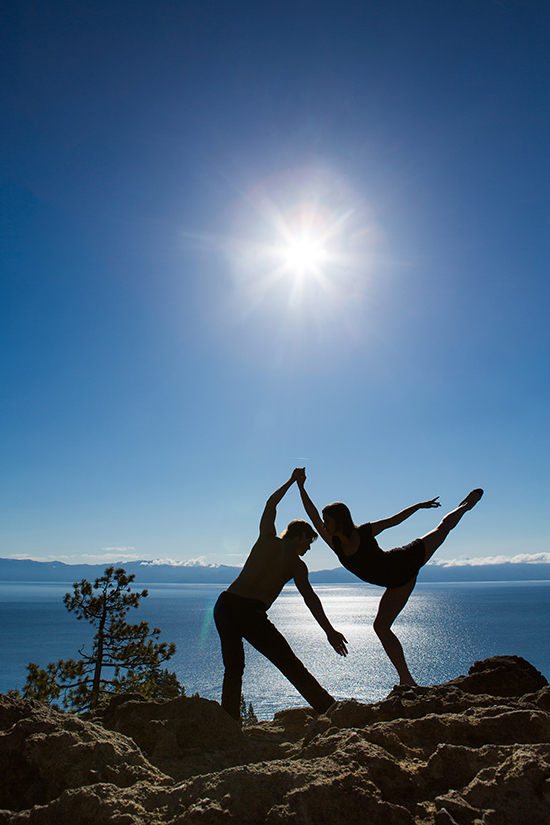 The 4th Annual Lake Tahoe Dance Festival will open Wednesday, July 27 at 6pm with a gala performance, and with main stage performances on Thursday, July 28 at 6pm and Friday, July 29 at 6pm.

Christin Hanna enjoyed a busy freelance career, performing with Oakland Ballet, Ballet NY, and Cincinnati Ballet, and was a founding member of New Chamber Ballet. She initiated a performance and summer workshop with students in her hometown of Tahoe City in 2006. Since her return to Tahoe in 2008, Hanna has produced 12 performances, featuring over 50 works with more than 20 guest artists under the auspices of her school, Tahoe Youth Ballet. She and longtime friend Constantine Baecher started the Lake Tahoe Dance Festival in 2013.