An Interview with Risa Jaroslow

Risa Jaroslow is a choreographer currently based in the Bay Area, California, who previously created work in New York City for many years. Her upcoming piece, Talking Circle, includes a multigenerational cast with performers from the Destiny Elders Project, a group of older performers she created and directs at the Destiny Arts Center in Oakland, CA. Here, Risa discusses how Talking Circle imagines a turning point in the life of a small community, as well as how her interest evolved in including nontrained performers from the larger community in her choreography. 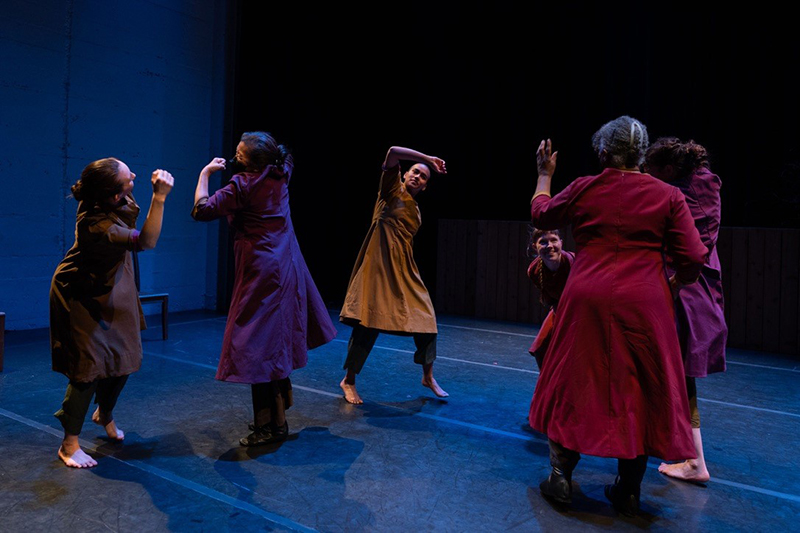 Can you share a little about your dance history and what shaped you as an artist?

I started dancing as a child. My first classes were with Murray Louis, who danced with Alwin Nikolai and then went on to have his own company. This was in a community center in the housing project where I lived in Queens. That was my introduction. I was five years old. I went on dancing through my childhood and adolescence, and then I went to Bennington College where I was a Dance major. At Bennington, I met, Viola Farber, who was in the first Cunningham company. When I came back to NYC, I continued studying with her and I started doing my own work. I lived and worked in NYC most of my adult life.

In my search for space, an ongoing need for choreographers, I connected with University Settlement on Manhattan’s Lower East Side. Settlement houses were created at the turn of the 20th century to provide services for mostly European immigrants. The immigrant population they serve has changed, but settlement houses still exist. At University Settlement, there was a big space with no pillars and a wood floor. I arranged to use the space for rehearsal in exchange for teaching a class at their senior center. I had never worked with older adults. It turned out to be a transformative experience for me. It expanded my view of what dance could be, who could dance, and where dance could happen. About a year after that, I made a piece that included dancers in my company in their 20s, me, 42 at the time, a retired social worker who was 87 years old, and an actress in her 60s. Most of my work since then has included a cast of many kinds of movers, from highly trained dancers to people of different ages and backgrounds who have no dance training. 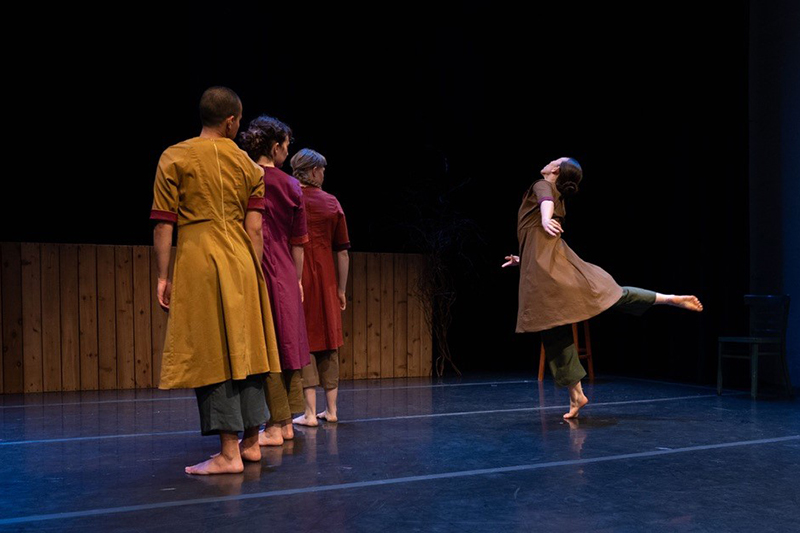 What brought you to the Bay Area in 2013 and how have you moved your dance practice across the country?

I was ready for a change. I had spent my whole professional life in NYC and I felt I needed new stimulation. I wanted to be somewhere I didn’t know what was under every rock and around every corner. My husband and I made the big decision to leave NY. Once we made it, we knew we would come to the Bay Area. I knew there was a dance community here. Also, our children were here as well as other family and friends.

It’s been a great move. My first projects here were as a guest choreographer at Sonoma State University and Mills College. I was learning the dance landscape and doing small projects in small venues. Eventually I felt ready to introduce myself in a bigger way.

I did a piece in NY in 2006 at Danspace Project called Resist Surrender. It started with the question:  What is the meaning of maleness in our culture and how can it be different? I was thinking about that as I watched my then young teenage son grow. We did the piece in Ireland at the Dublin Dance Festival in 2008 and again in NY in 2012. I had always wanted to do it in the Bay Area, and I thought it was time to make that happen. We did it at ODC Theater in San Francisco with Bay Area dancers except for one dancer from the original cast. She was essential for helping the new dancers learn the material. It has a cast of four dancers and a group of eight men who are not trained dancers. Each place we did that piece, we found a group of local men that ranged in age and came from different backgrounds. In remounting that piece here, I met new dancers and connected to local musicians. The score was written by Scott Johnson and played live in NY and Dublin. I called Paul Dresher to see if he could suggest an ensemble that could play it here. I was thrilled when he offered to do it. He assembled a fabulous group of musicians, one of whom, Lisa Mezzacappa, became my collaborator on my next project, Touch Bass.

I work very collaboratively, with other artists like composers, visual artists, designers, and also with the dancers. I work with dancers who have an appetite for collaboration and want to be makers as well as performers. I start a new piece with a question, something that feels urgent to me. Then I think about who I need or want to work with on this exploration.  I think of myself as an instigator as well as a choreographer. I spend some time generating movement material or structures before working with others. I see that material as seeds or pebbles to drop in the water so rings can open from them. The dancers take that initial material into other realms, ones that I would not have thought of. That’s the beauty and magic of collaboration. We are each limited by our own physicality and imagination. When I see another person’s way of approaching something, my imagination is stimulated, and I get to new places in my thinking and envisioning the work. The skill, personalities, emotional dispositions, intelligence of the dancers, both trained and non-trained, create and shape the work.

What was the impetus behind Talking Circle?

I read a novel that blew my mind and resonated deeply with me. The question it created for me  was: What is the freedom that any one of us longs for, and what would we risk to have it? This book was about an isolated religious community in which women were being drugged and assaulted in the middle of the night by men in the community. In this story, eight women of three generations hide in a hayloft to decide whether to leave or to stay. Leaving was very dangerous but it held the promise of something better. The question for them was: What and how much could they risk?

That’s where I started. I got together a group of four dancers just before COVID hit. We worked for two months and then everything came to a halt. Over the next two years, there were long stretches when nothing happened, or we worked on Zoom, or we worked outside. One dancer got pregnant and left the Bay Area. So much happened in those two years but I kept my eye on the prize. In June 2021, we were able to get back into the studio. At that point, I brought two elders into the process. They are part of the Elders Project which I helped start in 2016 and continue to direct at Oakland’s Destiny Arts Center. It was very gratifying to bring these strands of what I had been doing over the past few years together through this project.

What is the Elders Project and why did you decide to include two performers from it in your current piece?

For more than 30 years, the Destiny Arts Center in Oakland has been committed to inspiring and igniting social change through the arts. My granddaughter was in the teen company and I saw several of their fantastic performances. Several times I said to Sarah Crowell, the artistic director (now emerita), “It was a great show, but it would be really great to see older people too.” Eventually she said “Let’s try it.” It was the summer of 2016 when I went around to different senior centers and programs for older adults. Sarah reached out to people who had children or grandchildren at Destiny. We brought together a group of 17 elders. We’re now in the seventh year of the program. The most important aspect of it is the intergenerational work. The elders start the year by meeting weekly. We add meeting with the teens and youth as we start working on a production. There is so much learning and sharing that happens in that process. COVID made the last two years challenging but we persisted working on Zoom and outside when necessary. Now we’re back to working in person, though still in masks.

The two elders I brought into Talking Circle have been in the Elders Project since its beginning. They touched me and they were excited. We had to find a way to work together in this new context, since it was different from the Elders Project. We got there! The four dancers and the two elders work together beautifully. There is so much mutual admiration and respect. What I find happens when older and younger movers work together is that older people discover they can do more than they thought they could. They get pushed gently and go with it and feel a great sense of accomplishment. And the younger highly trained dancers who love to eat up space have a chance to notice and appreciate smaller, quieter movement. Everybody has new experiences and learns something. That’s true working with non-trained dancers of all ages, not just elders. In Resist Surrender, the men who worked with us never saw themselves being part of a dance performance and were excited when they became an important part of it. When you bring together people who are different kinds of movers, everybody learns and grows. Audiences can identify with people who look like them onstage with the dancers.  And as the choreographer/instigator/director, I have a richer pallet to work with. 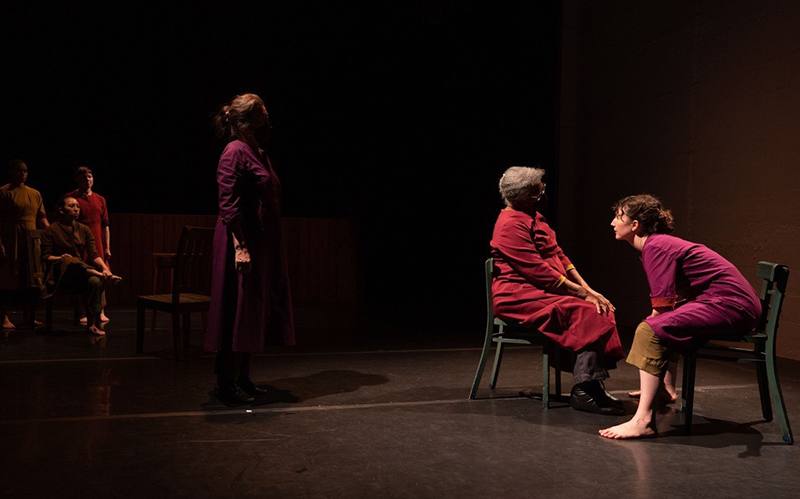 What has been your choreographic process for creating Talking Circle?

When we started at the end of 2019, I knew I wanted the piece to feel like a conversation. I was working with the image of those three generations of women in the hayloft struggling to make hard decisions that would determine their futures. It was a powerful image. I was intrigued by the idea that they only spoke a language that very few people speak and couldn’t speak the language in the world around them. I thought we should start by creating a language. We made a sequence of 42 gestures that we thought of as our basic vocabulary. The dancers took those gestures and developed their own solo material. Then we started working on duets and group sections. All that work was recorded and got put away when the pandemic started.

After a few months into the pandemic, we started working on Zoom and outside. When we got back in the studio, I brought in the two elders, and we really started to build the piece. The elders learned some of the gestures. I worked alone with each of them to develop their solos. Then they started working with the other dancers.

I hope audiences take away from my work what I hope for when I see live performance. I want to be moved to cry or laugh or have a memory evoked or have a new thought or see something, if not the whole world, in a different way