An Interview with the Dance Artists’ National Collective Leadership Committee

Dance Artists’ National Collective (DANC) is a united group of dancers advocating for safe, equitable, and sustainable working conditions for dancers in the US, especially those who are most impacted by systems of oppression. Here, members of DANC’s leadership committee share how DANC is structured, how their initiatives work to create more transparency and equity in the dance field, and why they center BIPOC/disabled dancers in everything they do. 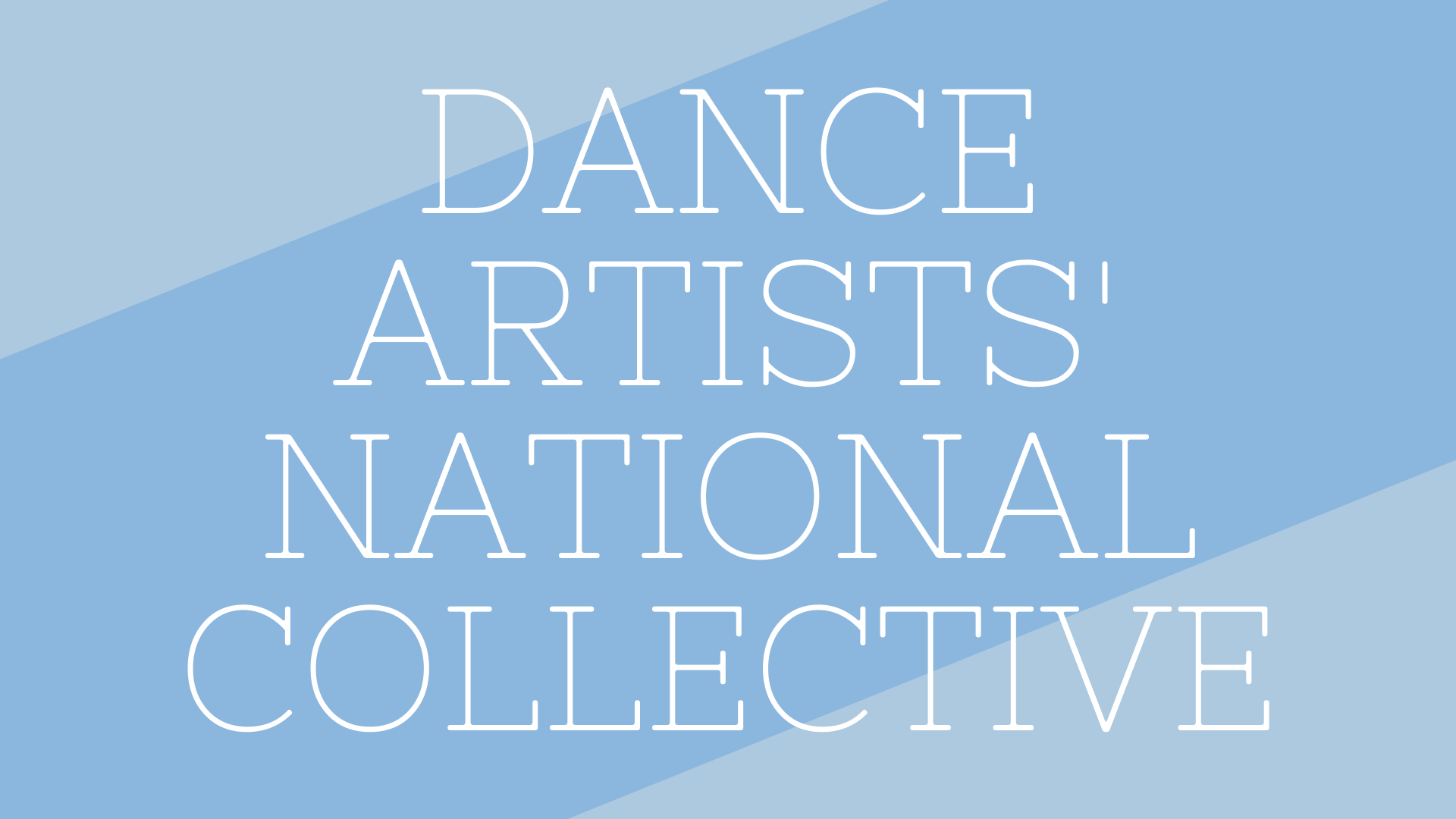 How did the Dance Artists’ National Collective (DANC) get started?

DANC began with focus groups of freelance dancers hosted by Griff Braun and Evvie Allison at the American Guild of Musical Artists in 2018. After attending one of the focus groups, Alex Rodabaugh asked if AGMA would host monthly meetings for freelance dancers to discuss unionizing on a regular basis in February 2019. These meetings continued and after attending meetings regularly, David Gonsier, an AGMA member and freelance dancer, joined Evvie and Alex to form Dance Artists’ National Collective as steering committee members. After a year of meetings, in February 2020, the steering committee invited Antuan Byers and Megan Wright to join the committee as well. When the COVID-19 crisis became apparent in the US in March, we began virtual weekly meetings to address issues arising for dancers suddenly shut out of employment. In July 2020, the steering committee expanded again to include Catherine Kirk.

In late 2020, the steering committee opened and evolved to consist of a circulating group of active DANC members who continued to show up. At the same time, DANC members voted to shift the organization’s focus and center the needs of its BIPOC and disabled members. In December 2020, DANC began to reassess its tenets and operational logistics. A committee called “core documents” formed to draft a new mission statement and guiding principles for DANC. Simultaneously, a committee called “internal structure review” formed in order to reevaluate DANC’s leadership structure and decision-making processes. In April 2021, DANC voted to adopt its first mission statement and guiding principles. And in September 2021, DANC voted to try a new leadership committee structure on a trial basis. DANC’s leadership committee is a fluctuating group of seven to 10 people who are paid modest stipends for their work.

How is DANC currently organized and funded?

DANC currently organizes our work through a handful of entities:

DANC is currently funded through a fiscal sponsorship with Fractured Atlas, through major donors like the Mertz Gilmore Foundation and National Performance Network, and through individual donations.

What does DANC’s membership currently look like? And on the ally side, what kinds of people are most commonly allies?

From May 11, 2021 (when we introduced our current member signup form, including the requirement to identify as a dancer and pledge in solidarity with DANC’s mission and guiding principles) through the present, DANC has had 141 dancers join as members. We have an additional 456 allies, which include those who signed our solidarity statement prior to 5/11/21, and those who have completed our current allyship form in solidarity with our mission and guiding principles.

Members all have the opportunity to start and contribute to any initiatives or projects, propose changes and new actions, vote on the core actions of the collective, and engage in conversations around issues relevant to our mission.

Our members report working in more than 31 different styles of dance. In addition to work as dancers, the vast majority of our members report also working in the dance field as choreographers, dance teachers, arts administrators, directors, and other roles, and/or work outside the dance field in areas such as business/administration, fitness and physical therapy, theater production, film/video production, childcare, writing/editing, the service industry, and others.

Our allies include many dancers who have not yet become members, as well as other individuals and organizations, including choreographers, arts administrators, musicians, producers, funders, presenters, academics/scholars, dance teachers, artists in disciplines other than dance, and others within the dance ecosystem – from areas all over the US.

Many of our individual donors are allies. When we put out petitions or when we need voices amplified, we call on our allies. Some allies attend general meetings to stay in the know of what’s happening. Finally, our Instagram and newsletter subscribers are full of allies!

Like most of our work, it started with a shared Google Doc that was circulating in the community, first with DANC members and then publicly open for commenting by anyone in the dance community. These guidelines were a direct response after witnessing harmful and highly insufficient audition postings in the fall of 2021. It seemed imperative that after the major shutdown of our industry and after months of collective organizing, we could no longer go on without demanding more informational, equitable, and transparent job listings and hiring processes. 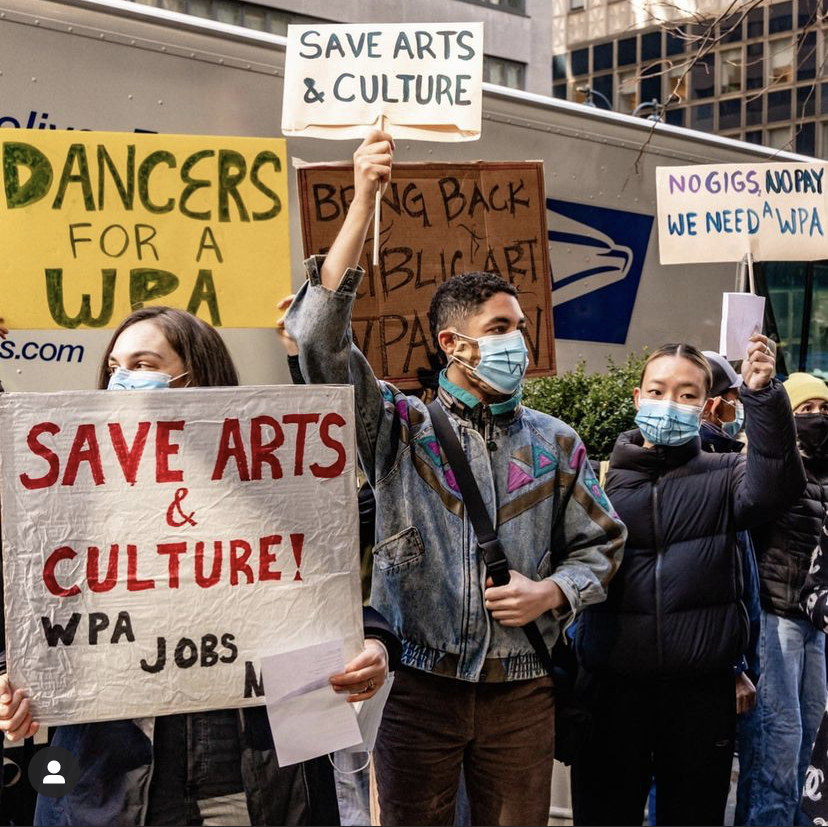 What responses or effects has DANC seen since releasing its audition guidelines?

We’ve had major support from the dance community at large and a few smaller companies/ independent choreographers have communicated to us that they have utilized our guidelines. The biggest impact we’re witnessing is from dance workers reporting lacking audition postings, harmful hiring experiences, and asking for our amplification and advocacy. We have engaged in public advocacy as well as directly reaching out to the criticized employers and encouraging or demanding they follow our guidelines.

In 2020, DANC launched a wage transparency campaign by creating a spreadsheet that dancers could contribute to anonymously, sharing their employment information. In the past two years, have you seen any industry changes with regards to wage transparency?

We haven’t done any focused research or surveys around this topic since we initiated the Real Dancer Wages spreadsheet. Anecdotally, we see some individual choreographers (especially those who are DANC members or allies) taking steps to publish pay information or expected pay range in audition notices and calls for submissions for future projects/gigs, but industry-wide there seems to be little movement towards greater pay transparency, and thus little movement towards pay equity, especially among larger, well-established employers whose dancers are not unionized or otherwise collectively organizing.

DANC has recently had several conversations with the leadership in prominent companies and presenting organizations in which we have received much push-back around both wage and budget transparency, and particular resistance in some cases to publicly sharing even a minimum expected or starting salary/wage in a job posting. In a broader sense, we are finding hope in the small pockets of political movement affecting pay transparency in all fields, with bills being passed like NYC’s pay transparency law, which will require salary minimum and maximum ranges in postings for all jobs in NYC, starting in November 2022. This law and others like it will most definitely benefit dancers by allowing us to make more informed decisions about our careers, providing more information with which to advocate and negotiate for better compensation, and help to combat wage gaps and wage disparities, such as gender and racial pay disparities, across the dance field.

We’ve been in conversations with Dance/NYC for more than a year regarding a lot of ableism happening to members in our community. As part of Dance/NYC’s Dance Workforce Resilience Task Force Launch Event, one of our members who has a disability was invited to be a speaker for their launch. She couldn’t be there in person because of the pandemic, so they accommodated her to do a pre-recording. However, they didn’t show the recording because of technical issues and didn’t acknowledge the fact that she was supposed to be a speaker. While it wasn’t malice, the intentions were severe, as she was the only disabled and BIPOC speaker at the event.

There are organizations that claim to center certain populations; there’s this whole rhetoric around supporting the disabled or BIPOC community, but often these communities continue to be harmed because these organizations are still ableist. The reason we did this campaign was it appalled us that even after all that time and dialogue with Dance/NYC, they would make this kind of mistake. There’s this pattern of trying to benefit from claiming you are doing work for marginalized communities. But it doesn’t feel like there’s learning happening; nothing gets applied across the organization.

One of our Black members, who is a recent college graduate, was recently taken advantage of by a prominent New York City dance nonprofit organization. She was hired in the beginning of the year as a development assistant. The organization took advantage of her position as a young woman and dance worker of color in need of work; they wanted her to work full-time hours but be paid a part-time salary without benefits, which were not the parameters of the job description she was being hired for, and when she protested, they rescinded the offer. Meanwhile, upon her being hired, this member had  signed a lease in NYC where she did not live but was preparing to move, as she was told by the employers to relocate in order to work there. She approached DANC for help, and as a result DANC launched a campaign to try to raise back the member’s lost funds.

This campaign underscores a common practice in large dance institutions where an ideology is marketed outward to garner support and funding, but in practice they harm the marginalized folks they claim to serve.

The LOA circle is working on a letter of agreement template and a negotiation toolkit for freelance dancers. The construction of these documents began collectively, through satellite focus groups of DANC members, to address wages, benefits, working conditions, equity, and negotiation.

When DANC formed, it was a very white and nondisabled space. The leadership team has had tough dialogues and uncomfortable conversations. We’ve been trying to keep our eye on how racism and ableism exist everywhere. Recently, we’ve been in dialogue with New York Live Arts who announced an audition that was ableist. Our lenses are focused on recognizing racism and ableism. A lot of DANC’s actions are led by either a disabled or BIPOC person. BIPOC and/or disabled voices are held in high regard in DANC. DANC credits Sins Invalid for the disability justice framework and Talila Lewis for the definition of ableism, both of which we draw upon often. It’s been a process; we’re continuously learning.

How can people get involved?