Hai Cohen was born in Jerusalem and became paralyzed from the chest down after jumping into the shallow water of a swimming pool. He became a music editor in the army radio station and studied Philosophy. Hai graduated from the Sam Spiegel Film and Television School and went on to create documentary films. He is a dancer, teacher, and co-manager with Tali Wertheim at Vertigo Power of Balance, which operates out of Vertigo Eco Art Village near Jerusalem. He has practiced contact improvisation since 2000 and leads workshops and projects in disabled and non-disabled contact improvisation in Israel and abroad.

Listen to the audobook recording of Hai Cohen’s interview here! 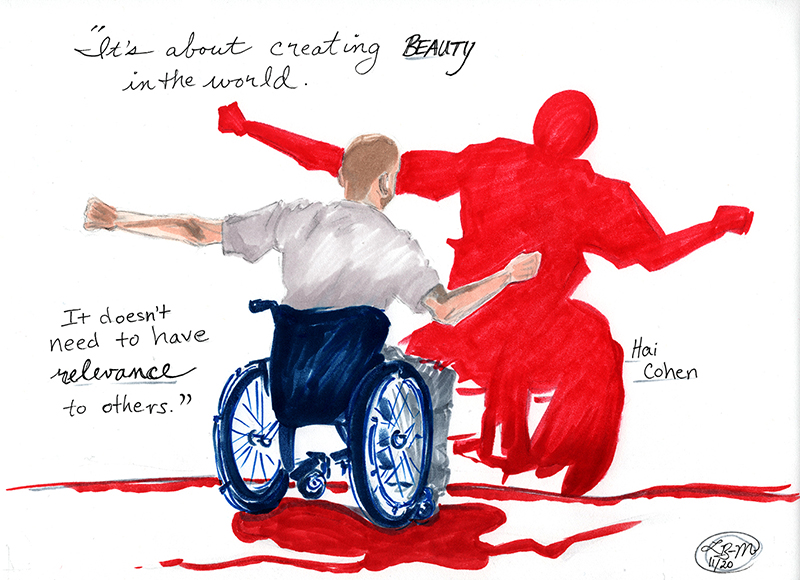 Image description: Hai is depicted facing back with his arms extended to the sides. His wheelchair is blue, he is dressed in gray, and he casts a large red shadow of his image as if he is facing a wall. The quotes, “It’s about creating beauty in the world” and “It doesn’t need to have relevance to others” hover around him.

I was injured when I was 13. I jumped into shallow water in a swimming pool. I got back to so-called “normal life” in high school. In Israel we have the army so, after high school, I volunteered for the army and became a music editor at the army radio station. After that, I studied film for five years and ended up making documentaries as well as experimenting with video. While doing some research for a film in 2000, I met a dancer who invited me to an integrated dance workshop. I said no, that it was not my interest, but she insisted so eventually I joined. The workshop was through Vertigo Dance Company and hosted by Adam Benjamin for the creation of a new piece. The workshop was three days long and was very powerful for me.

After the workshop, Adam went back to England and then came back to Israel to start working on the piece. It was two or three months of rehearsal and, a year after the workshop in 2001, we premiered the piece. There were four participants with disabilities who joined the original cast. The name of the piece was Power of Balance. We performed it for three years.

Tali and I taught workshops and created some works for the stage, including a duet and a trio with another dancer, Maya Resheff, who is not disabled. The trio, 11,711 Stone Steps at Nikko, was a highlight for me because it incorporated haiku. I try to incorporate haiku into everything I touch. When I worked in film, I tried to create cinematic haikus, and with this piece I was trying to make a dance haiku within the structure and spirit by using contact improvisation.

I’ve also been part of the Israeli contact improv association that has been around for many years. I think the first festival was around the time I started dancing, and it grew slowly over eight or nine years. It is very significant for our work, which is not only directed to the integrated dance field but also to the contact improvisation field in Israel and around the world.

As far as other highlights, in 2007, Alex Shmurak (a dancer and a friend) and I did a collaboration with a company in Ethiopia where we choreographed Adugna. I also made a documentary about the project. In 2013, we did a co-production with Gerda König called HOMEZONE. Now, we’re in the middle of a new process by choreographer Sharon Fridman, who is originally from Israel but lives in Madrid. It’s his first time working with an integrated cast, but he’s a rising star in the dance world. I’m not actually dancing in this piece, but I’m helping to manage it, so I’m very much involved. The piece has 10 dancers, five with disabilities and five without.

I teach with Tali a training for integrated contact improvisation. The course is a full day once a week, and it’s a two-year program. Of course, it’s integrated for participants of all kinds of abilities. We’re trying to make the model co-teaching in an integrated team, one teacher with a disability and one without. That has a lot of power. This is our main practice for the past four years. We also do one-time projects and classes, like with a dance department in a high school together with the special education kids, or offering professional development for teachers in integrated dance so they have the tools to work with any kid.

Many people think I’m joking, and then they see I’m not smiling. Usually I don’t have the energy to explain. Most people just have a question mark. Some ask, “With your wheelchair?”

When I teach, there are people in the class who at first don’t know I’m the teacher. I sense that they think I’m something exceptional but they still see dancing with me as an option. Maybe because the contact improvisation world is more open, dancing with someone with a disability is more of an option.

When I go into a restaurant and there are stairs, I don’t get mad. I ask someone to help me up the stairs. I don’t have the energy to get angry. Of course I believe that integrated dance should be much more supported, and I hope that in the future we can teach anyone who wants to dance. I feel like I have two worlds; I really believe in this when I teach and present work, but when it’s personal, I find I’m not as involved. It’s more enjoyable not to be angry so much.

I’m not so interested in what people think about the choreographed work. There are so many opinions in the world. Some I believe; many I don’t believe. I’ve learned how to look at the creation process from my own point of view, from what I wish to see in dance or in film. For some, my films are slow and boring, but it’s something I like to see, like an endless shot where nothing happens. I like to see time as the value of discovery.

Maybe it’s different when I think about participants in my classes. There’s a variety of experiences within the same class. Some enjoy it, some not. I am giving a class though, which is different than giving a performance. I don’t give a performance for the audience. It’s more about creating beauty in the world. It doesn’t need to have relevance to others. But when I’m teaching, it matters to me what the students’ experience is. If I see someone suffering or having a hard time, I feel responsibility. But at the same time, I can accept that people don’t always enjoy my teaching. It’s fine.

As for the press, this new piece we’re working on has got me thinking a bit different than I was before. Before, I would have said to try and see it as professional dance. Now I think it’s more about the approach of the integration. In this new piece, Sharon is a bit brave. He is putting disability onstage and showing it as something weak and at the same time showing its power. He has managed to show these two qualities that actually everyone has. People with disabilities sometimes need more help. This is a reality and not something we need to hide or wrap in beauty.

For example, one of the dancers has cerebral palsy and walks with crutches. He can also walk without them but his balance is not good and he has a funny walk with short steps. In the piece, he walks without the crutches. It’s very powerful to see the weakness and difference, to see the naked walk without the crutches. The crutches hide the original walk. They not only help him physically, they also help to normalize him. But if he walks the way he does, without crutches, I can see it, feel it, and benefit from it. Appreciating this kind of detail is something different than what I thought before.

The press should understand that disability in dance isn’t something to portray as something that it’s not. Still, see it as a professional act. And of course, it should not be portrayed as charity or therapy.

Of course not. Every studio, after school program, and university program should have the ability to accept anyone with any disability. But of course, there is a lot of work to be done. What happens sometimes is people open their doors to disabled students without the ability to teach them. You need the knowledge to understand how to work with a diversity of bodies and abilities before you open the doors. Many difficulties and frustrations can arise.

We need teacher trainings to start with. And then I would prioritize the schools. It should start from the beginning, even for students without disabilities to be open to this from a young age and see students with disabilities as participants.

Yes, of course. It should be treated the same as other dance fields. It should be expected to be as good and as professional and be given the same space and recognition. Saying that, I’m not sure how I feel about integrated dance festivals. They can offer options that other festivals can’t. But at the same time, it can feel like a ghetto with an inner dialogue only within the community.

I’m really tired of dealing with terms. In Hebrew, it’s even worse; it’s much easier in English. In Hebrew, the word “disabled” is like an insult. I used to not answer when people used that word. Over the years I’ve gotten tired and now I use it myself and I don’t mind. Still, I agree there’s a lot of meaning behind the words we choose. At Power of Balance, we’re using “integrated,” but “inclusive” is also great. “People with diverse bodies” is also strong.

Of course, yes. I think there are big steps. I can see development from our center in Israel and more support from the government. There’s still a long way to go, but it’s really different from what it was. There are more audiences and disabled participants who want to experience this. 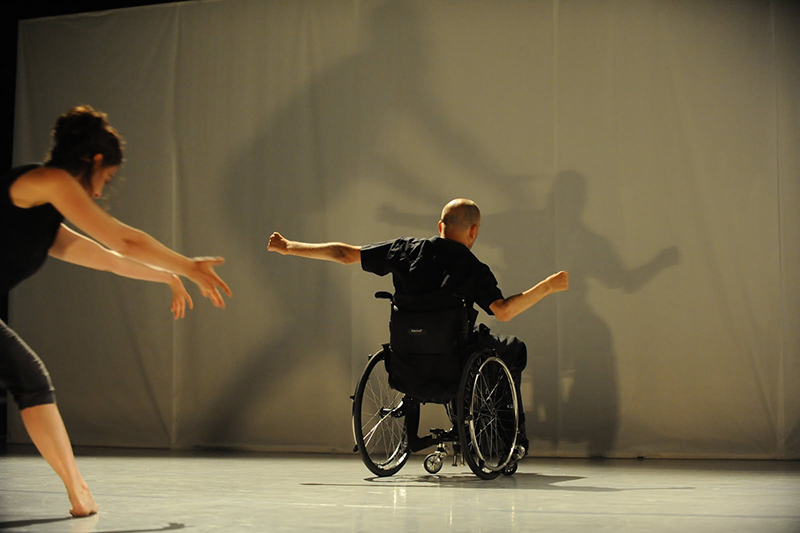 Hai Cohen, photo courtesy the artist.
Image description: Hai is facing the back wall with outstretched arms. A standing dancer is behind him reaching toward him. Both of their shadows project on the wall.

To learn more about Vertigo Power of Balance, visit vertigo.org.il/en/power-balance.

This interview was conducted in April 2020.