An Interview with Erin Donohue and Yvonne Montoya, co-organizers of Dance in the Desert

Dance in the Desert will take place in Douglas, AZ and Agua Prieta, Mexico on May 19-22, 2022. To learn more, visit www.yvonnemontoya.co/dance-in-the-desert. 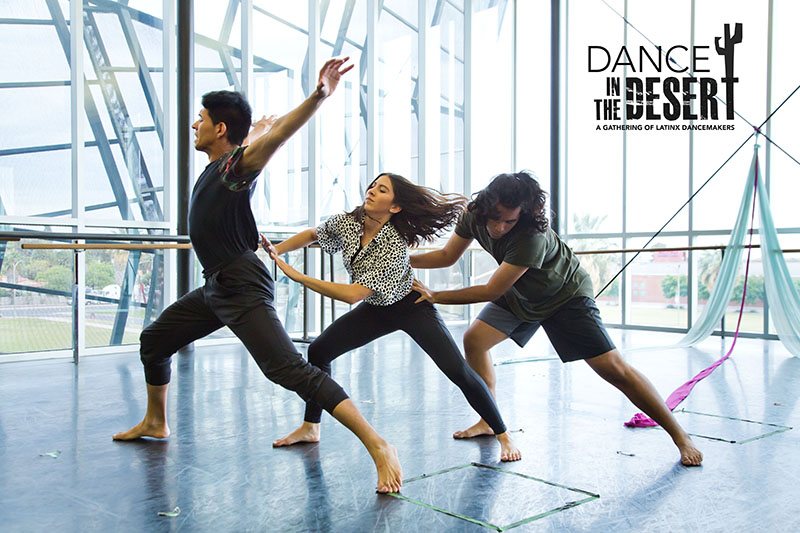 Can you each tell me a little about yourselves and what shaped who you are as artists?

Yvonne: I’m a choreographer based in Tucson, AZ. I’m also a mother. I danced for many years of my life and retired from performing about five years ago. I’m from Albuquerque, NM, and have lived in Tucson for many years. What drives me as an artist are questions about the movement aesthetics of the Southwest: How my culture, aesthetics, experiences, and community are or aren’t reflected on concert stages, how and where dance has historically occurred in the Southwest region, what does that mean for contemporary dance, and how can we build community across geographies, recognizing that many cities in the Southwest are separated by huge swaths of desert. How we can support and build communities across real deserts, as well as financial deserts, as there is a lack of funding and institutional support for dance in Tucson, in Arizona, and in the Southwest in general.

Erin: My heart is in dance as a way for people to connect through community practice and not just concert stage. I’ve always been interested in forms that don’t necessarily make it into the Lincoln Center Gala. I’m classically trained in ballet, modern, and jazz, but I feel most connected when I’m working closely with others in intergenerational spaces, different ability spaces, thinking about aesthetics not just as high to low but through deeply personal and cultural lenses. Dance has an important place in artistic practice but often gets pushed to the fringes because of codification and hierarchies in the art form. Yvonne and I found each other by asking: How do we break that down in university spaces and field wide? In my current role, I function as a producer and choreographer, as well as dance on the side. I spend most of my time in an arts admin capacity.

What was the impetus behind Dance in the Desert and how did it get started?

Yvonne: I have a 501c3, and in 2015 the board spent a year shifting the company to something more sustainable. That freed up my time to think about how we can have a larger reach and impact beyond Tucson. I felt isolated; I didn’t feel like I had peers. All the other contemporary choreographers I knew at the time in Tucson were white. I didn’t know any local contemporary choreographers who were Latinx or people of color.

Fast forward, I was one of the Dance/USA Institute for Leadership Training mentees in 2016. My mentor was Rosy Simas, an Indigenous contemporary choreographer. Rosy took me to the Indigenous Choreographers at Riverside Gathering. It was such an incredible experience because there were choreographers coming together to show work, there were scholars writing about the dancers’ work, and it was a really lovely community of international choreographers coming together to support each other. It made me ask: Where’s the Latinx version? How do we create that?

I wanted to bring together Latinx choreographers and dancers to see who we are and where we are from. I pitched the idea to various larger entities and got a lot of no’s. In 2017, I started a postgraduate fellowship at Arizona State University, where Erin was working at the time. We started brainstorming and talking. Around the time, I had lunch with Gabriela Muñoz, who worked at the Arizona Commission on the Arts. I shared my idea with her, and she said there was a grant they could invest in us if we could get other grants to match. It was that infusion of funding and support from the arts commission that spearheaded this. The three of us came together to organize the first Dance in the Desert in 2018 in Phoenix. We invited Latinx dancemakers from all genres of dance from three communities in Arizona: Phoenix, Tucson, Douglas/Agua Prieta (which is a small rural border town), and around the country. 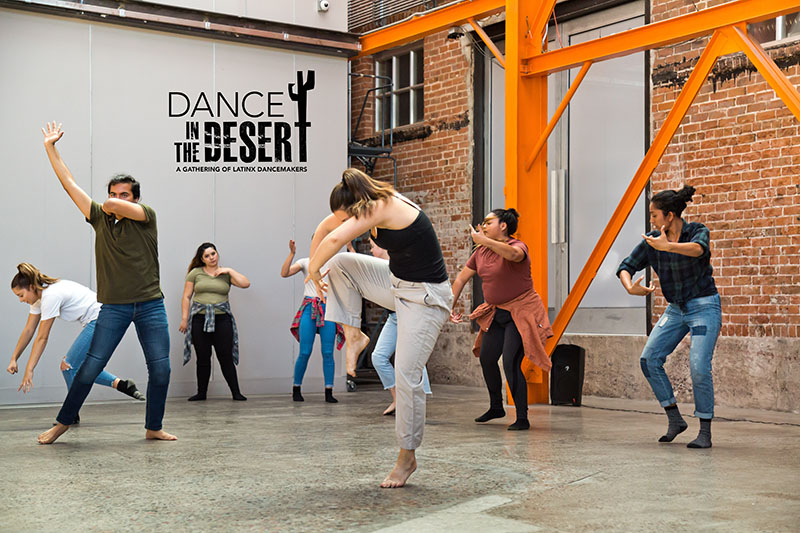 We brought people together and talked a lot about what we do and what our communities look like. We talked about funding. We spoke with presenters. We did focus groups. We hired a researcher to come in. We surveyed the community about what they want to do and see in the future.

The next year, Gabriela came to us and said there was more funding available and asked what we were going to do. In the survey data, participants said we sat around and talked too much, so the second iteration took place in 2019 and focused on the choreographers. The same Arizona community members were invited. We paired eight to 10 dancers with five choreographers. It was not a commission; choreographers had free artistic range. The work that came out of it was incredible.

We had momentum and wanted to do Dance in the Desert again in 2020. We heard from the community that they wanted more professional development, like workshops in grant writing or putting together a work sample. We planned some online workshops as well as a series of masterclasses, but then the pandemic happened. Because we were ready to go with the online classes, we went ahead and did those, which are still online, free, and accessible. But otherwise, we paused and waited.

Now we’re gathering again next month in Douglas. During the transition from 2020 to now, the Arizona Commission on the Arts left the project when their grant funding ran out, so right now, Erin and I are the ones running this. We don’t have a large institution behind us. It’s a lot of work.

Erin: This has been something that Yvonne has had a vision of for many years and something that is desperately needed in the community. A lot of folks were ready to sign on to her mission. It’s such a difficult lift for someone who doesn’t have an institution behind them. To see it flourish because she has built partnerships and community on a grassroots level – it doesn’t happen very often, and it makes this project really hum.

How will Dance in the Desert be organized this year?

Erin: Every year, the programming is based on what we hear from the community. We resurveyed folks, and they want to be in space and take class together, so this year is kind of a masterclass jam of many different classes and disciplines on both sides of the border. We’ll be half in Agua Prieta and half in Douglas. We’ll have classes taught by folks in the Dance in the Desert community. Classes will be free to folks in both communities because they have really vibrant dance scenes that often get left off the map. It’s going to be a lot of fun to open it up to a broader population of movers. Some of our partners have lived and worked in Douglas and Agua Prieta their whole lives and have deep community connections.

Yvonne: We’ll have four classes in Douglas and four classes in Agua Prieta, recognizing that on both sides of the border there are members of the community who can’t cross to either side. There will be flamenco, vogueing, breaking, contemporary, folklorico, and maybe salsa. It will be an exchange from teachers on the Mexican side as well as teachers from Arizona. 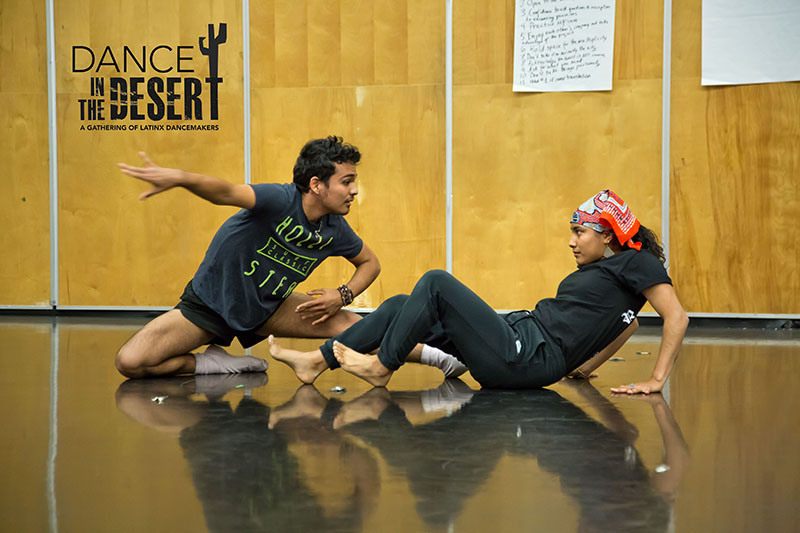 How do people participate?

Yvonne: In the past, it’s been by invite only, but this is the first year the masterclasses are open and free for any dancer over the age of 15. We’re centering the Douglas and Agua Prieta communities in order to give them all the love we gave to Tucson and Phoenix in the past. Some dancers will be travelling to teach and some just to experience it.

Why is Dance in the Desert needed? How does it amplify Latinx dance artists?

Yvonne: When it initially started, it was needed to hold space for community and to build relationships. The number one goal of Dance in the Desert is to build relationships. In my experience, I was very isolated as the only Latina contemporary choreographer in Tucson at the time. I didn’t have anyone who had a sense of my aesthetic. How can an artist grow without a community? That was a reason it was needed, as well as to connect people across geographies.

Recently, Adriana “Bibi” Harris, a studio owner in Douglas, received grant funding to do dance and art workshops with migrant refugees, and she hired people she met through Dance in the Desert. She told me that without Dance in the Desert, she wouldn’t have known those grants and opportunities existed. A lot of the artists who were students when we started Dance in the Desert now have their own artistic practices, are writing their own grants, and are hiring Dance in the Desert artists. They are becoming self-sustaining with the very little resources we have here. We’re seeing this robust community beginning to be built.

Erin: The Southwest is a desert for funding. It’s also easy for Southwest dance makers, and especially Latinx dancemakers, to get forgotten about or lumped into other groups, like BIPOC. In the Southwest, there’s such a different history here than other parts of the country. For a group of Latinx dance makers to have a space to be together, even if they’re coming from different practices and forms, is really important, and it’s meaningful for Latinx people to not have to hold space as the only Latinx person in the room. 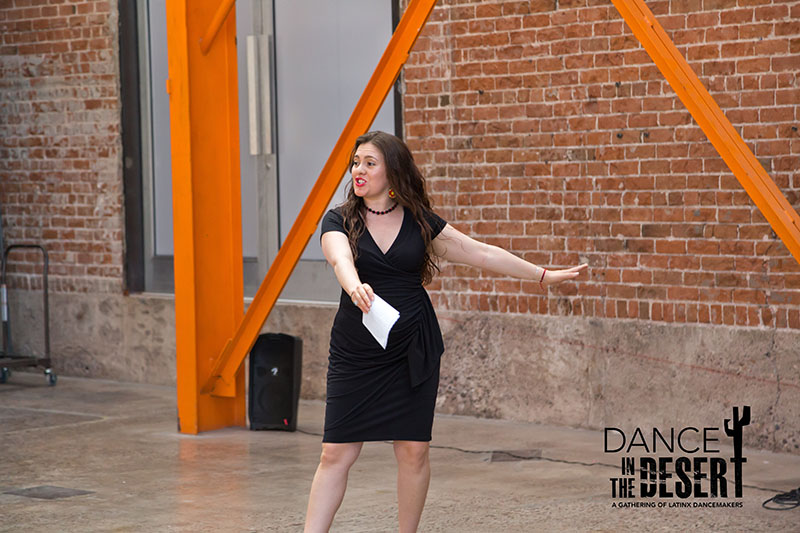 How do you see Dance in the Desert continuing in the future?

Yvonne: That’s a question we’re going to have to tackle after this year. It’s difficult to do this without institutional support. I don’t know how much Erin and I can carry on our own. We also recognize that the needs of the community may have shifted. Some of the preliminary feedback from surveys I’ve done shows that some people have left the field or are considering leaving. We need to get input from the community. Dance in the Desert will probably evolve to be more feasible for Erin and me to continue if we choose to do so.

Erin: Dance in the Desert has been mostly led and carried by Yvonne, and without the community and institutions stepping up in different ways, it’s difficult to see a clear future. We’ve had some conversations with folks around archiving and keeping the story alive, particularly around writing and scholarly research. There needs to be a balance between documentation as well as keeping the community fed and cooking. Those are two big undertakings. We’ve felt pulled toward one or the other, but we’re not sure if anything will continue in certain terms. We’re just trying to pay attention to what’s being revealed in the community and beyond.

Erin: I want to emphasize how amazing it is to see this group of dancemakers come together every time. I’m excited to be back in space together, especially in Douglas and Agua Prieta. Decentering major cities is something we don’t do often enough. We’ve worked hard to make that happen and are excited to partner with local organizers on the ground.

Yvonne: Erin is a joy to work with and an incredible co-conspirator.

To learn more about Dance in the Desert, visit www.yvonnemontoya.co/dance-in-the-desert. 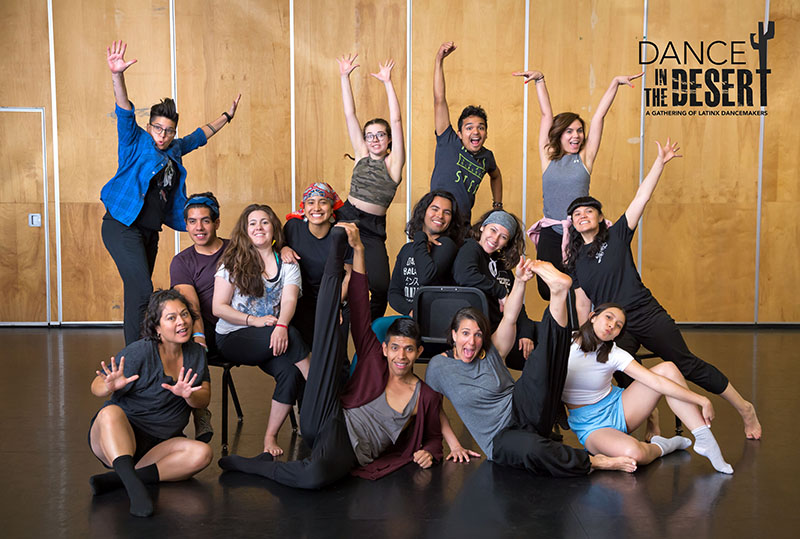