An Interview with Charlotte Moraga and Alam Khan

Charlotte Moraga is a kathak dancer, choreographer, master teacher, one of the few protégés of the renowned kathak dance artist Pandit Chitresh Das, and the artistic director of the Chitresh Das Institute. She is collaborating with Alam Khan, noted sarod player and composer as well as the son of celebrated classical Indian musician Ali Akbar Khan, to create Mantram, which premiers in San Francisco in October. Here, they share their process creating a work that expands the vocabulary of the kathak tradition, as well as what innovation in this traditional art form means.

Mantram will be performed live at ODC Theater in San Francisco on October 15th-17th with digital livestream available on October 28th. For tickets, visit odc.dance/Mantram. 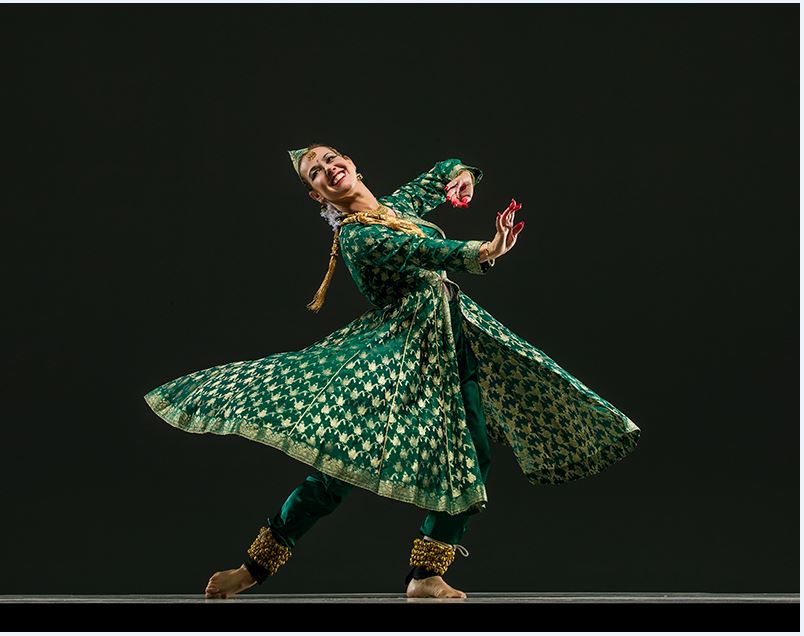 Charlotte, can you tell me a little about your personal history and what shaped who you are as an artist today?

Charlotte: What shaped me as a dancer, artist, and teacher would be my experiences growing up in Miami. I started in Western dance with ballet and jazz. I performed professionally on the East Coast in Atlanta, New York, and Gainesville, FL, as a jazz dancer and in industrials and musical theater. When I moved to the San Francisco Bay Area, I switched gears. I went to San Francisco State University and was getting out of professional dance for job security. I needed some PE credits and accidentally took kathak classes from this incredible master, Pandit Chitresh Das. I had tried to sign up for flamenco but the class was full, so I ended up in the kathak class. I didn’t even know what classical Indian dance was.

I discovered kathak was amazing. It’s a theatrical dance form and there are three main aspects: the abstract, the storytelling, and the emotional interpretation of songs. Chitresh Das was an incredible master. The dance form was challenging physically but also touched me spiritually and culturally. What started out being a two-credit course ended up being my life’s calling. I became a principal company member, toured with Chitresh Das for about 20 years, and started his youth company. He passed away five years ago and, along with the executive director and managing director of his school, we started the Chitresh Das Institute, of which I am the artistic director.

And Alam, can you tell me a little about your personal history and what shaped you as an artist?

My father founded the Ali Akbar College of Music in 1967 in San Rafael, California, so my family has been settled in Marin County for more than 50 years. Chitresh Das had a dance department in the early days of the school, though eventually the school focused on instrumentals, vocals, and drums. Chitresh Das went on to found his own school, though we’ve always been like family.

I was born into all this in 1982. I started learning Indian classical music when I was seven and toured with my father before becoming a soloist. He passed away in 2009 but I’ve been continuing my lineage of Indian classical music since mainly by playing the sarod, which is a 25-stringed instrument and is related to the sitar. Sitar is the instrument everyone knows because Ravi Shankar played it with the Beatles. My father didn’t want to do the box office stuff as much and continued in the classical world. The sarod is a fretless lute-like instrument.

I’ve also been into production for 20 years. I have a home studio, I play guitar, I make beats, and I’ve been involved in hip-hop music. My mother is Caucasian, my father was Indian. That made me, and I’m different from my father in that way. I gravitated toward grunge and hip-hop. That got me into production. It took me a long time to mix those kinds of music with Indian classical music; I kept them separate. But 10 to 15 years ago, I started to mix them more. I started creating from the unique space that is me. 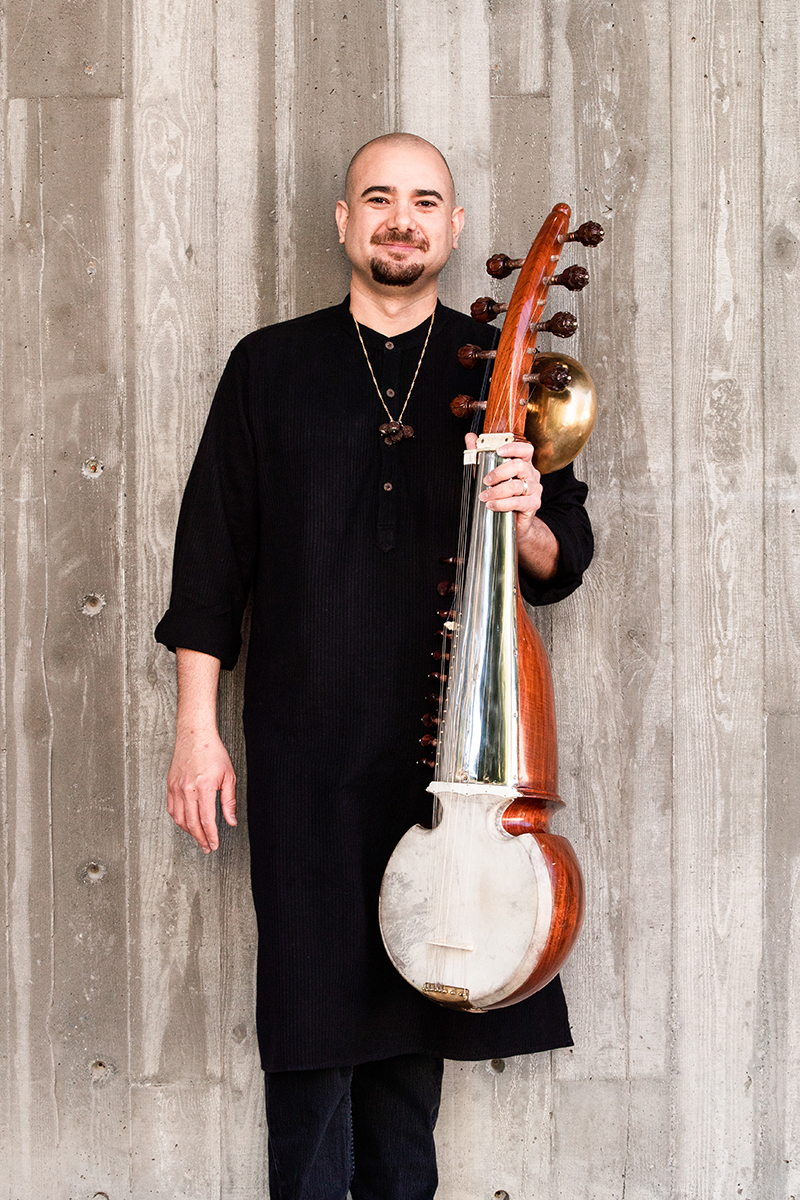 Charlotte, what is the Chitresh Das Institute and how did you became its artistic director?

Charlotte: It started in 2017. I was Chitresh Das’ principal dancer for almost 20 years, I was a senior instructor at his school, I toured with him, I started and directed his youth company, and I choreographed sections of his evening-length works. It was a natural progression. When he passed, the board put me in charge of staging his final piece that was scheduled to take the stage at Zellerbach Hall. A lot of things happened with the company and institution and things didn’t work out long term. So we started the Chitresh Das Institute because we wanted to continue to teach the artform to the next generation of professional dancers as well as to the community. We wanted to stage yearly productions that involved our entire community. And we wanted to continue his legacy as well as the youth company, which is one of the only preprofessional kathak companies. To be able to do those things, we needed to start the institute. And we’ve been doing it ever since.

COVID put a kink in things. Our last two community productions have been virtual. Our last home season was in 2019.

What is the impetus behind your upcoming piece, Mantram?

Charlotte: It was originally supposed to premier at ODC Theater in 2020 but was rescheduled for 2021. This piece has been on the burner for about three years now. It’s different than our traditional kathak productions. First, the music is not traditional; it’s very cinematic. And then I have been doing a lot of work focused on what is happening with climate change conditions and the fires in California.

In our tradition, fire is two-sided. We have Brahma the creator, Vishnu the preserver, and Shiva the destroyer which makes way for new creation, so it’s a very cyclical thing. Fire fits into that because it’s destructive but creates fertile ground. It’s really about the duality of the elements and how they are destructive but also life forces. There are five elements in our tradition called the Maha Pancha Bhoota: ether, air, fire, water, and earth.

The word “mantram” is associated with a Sanskrit shloka, or syllable. As a meditative practice, it’s a vibration you can focus on that will allow you to eventually transform. Initially, Mantram was going to be based on shlokas. These are ancient and have tremendous resonance and meaning. But I wanted to take away the shlokas so that we only have sound, no words. Sound is the essence of vibration. When you recite a mantram, it’s about the vibrations.

We’re working with Matthew Antaky, who is a brilliant scene designer. We’re creating five different worlds based on the Pancha Bhoota, or five elements. And we’re using these resonant boxes to dance on. Because our dance is percussive, we’re creating sound and vibration with them. That’s been really fun to experiment with. Beyond sound, we’re using the boxes in different configurations to create the five different elements. Each of the elements is taking shape based on our experimentation with them.

Basically, our mantram is the sound we make with our feet. We put on this earth the resonance that vibrates through our bodies and goes out into the universe.

Alam: I did a project called Grand Tapestry with a well-known indie hip-hop artist and producer. Through that project, I got into making more cinematic and minimal music in more loop-based layered sounds. I started to make music that I wanted to listen to but couldn’t find.

The music came first. I didn’t have anything to go off but loose ideas. There was no choreography when I started composing. The music came and it created a space for Charlotte to do her thing. We tweaked things here and there, but the process was open and gave me freedom to play with ideas.

A description of the piece reads, “Mantram simultaneously celebrates creative innovation and the kathak tradition with choreography and music that are experimental but based in the Indian classical art vocabulary.” How would you describe your innovations of kathak to someone who is not deeply versed in the art form?

Charlotte: In kathak, what we recite, we dance, but in Mantram there are no actual recitations. That has created a challenge for us. We are telling the story of where we are now in our political, social, and environmental situation. Storytelling in kathak is representational, but in this piece what we are doing is very abstract. For example, there are hand signals and vocabulary that we are breaking out of in some instances. Instead, we are storytelling in more of an abstract way, though I think it will be clear.

Alam: I’m playing my instrument, the sarod, in a lot of tracks but in some I’m not playing it at all. It was an even amount of thinking of sarod and production. I started by playing with electronic music, beats, or contemporary music on a computer, and then I would bring the sarod into it, and they would speak to each other. I also composed for instruments like the bansuri, sarangi, double bass, and sounds of nature. Rhythmically, the beats are familiar to Indian music, and some of the melodies are as well. But the innovations are everything else.

What do you hope audiences take away from Mantram?

Charlotte: I hope it resonates. I hope they feel the vibrations. I hope it also resonates on a spiritual and philosophical level, not just as visually stunning. I hope they see that classical Indian dance is not something you need to study to appreciate.

Alam: I hope audiences take away the beauty of these traditional instruments. It’s like traditional characters that are going out and exploring the universe of sound and possibilities. I want people to see that there’s another way. It’s about being unique to yourself and your own identity and creating from that space. There are worlds between worlds.

Thinking more broadly about kathak dance and innovations made by its practitioners, how have you seen kathak dance evolve?

Charlotte: I am part of an unbroken line of tradition. In some ways, there’s this thread that is eternal and will continue. But like all artforms, kathak continues to evolve and be practiced in ways that relate to our times. It used to be that concerts were improvised and there would be one dancer for hours. Now people want things faster.

There’s also technology; when I started dancing, we didn’t even have recordings, and I’m talking about audio, not video. Now we have smartphones. Things are so accessible. There are many ways in which the art form is changing just because things are more easily accessible.

But collaboration is the foundational key. Kathak has always been a collaborative art form because there is so much improvisation. Dancers collaborate with the musicians and audience, who can request certain compositions. There are also collaborations with percussive cultural genres like tap or flamenco. So for me to collaborate with my dancers and with Alam, Matthew, the space, a box, it’s all kind of natural. There’s so much improvisation. It’s what we’re geared to do anyway. What is traditional is also innovative. 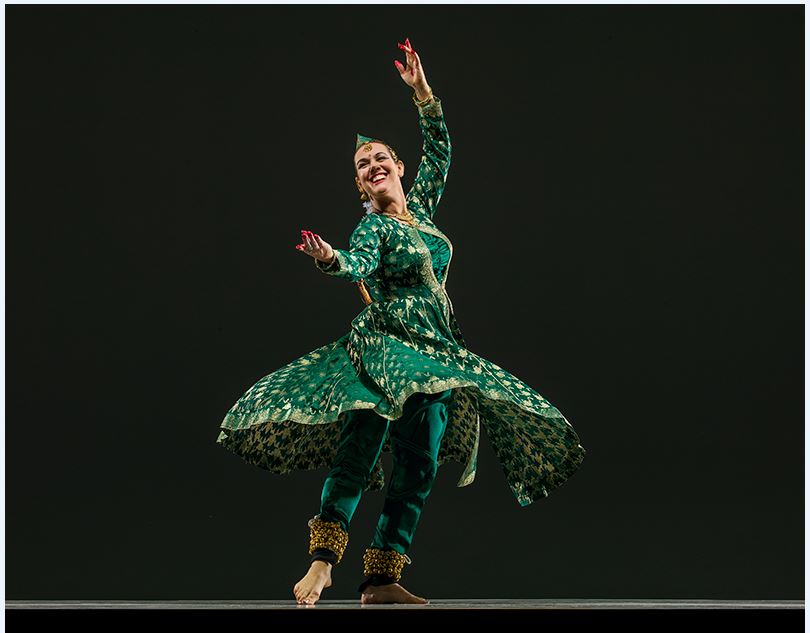 To learn more about the Chitresh Das Institute, visit www.chitreshdasinstitute.org.

Mantram will be performed live at ODC Theater in San Francisco on October 15-17 with digital livestream available on October 28th. For tickets, visit odc.dance/Mantram.