An Interview with Megan Briceno

Megan Briceno is a California-based dancer and choreographer, the director of Shapes and Shades Dance Company, and one of the organizers of the Inclusive Performance Festival. Planned collectively through Dandelion Dancetheater and Cal State East Bay by a council of Queer, BIPOC, Autistic, Disabled, Jewish, Neurodivergent, Fat, Young, Elder, Outsider, and uncategorizable artists, the Inclusive Performance Festival is presenting virtual, in-person, and hybrid dance, music, theater, drag, ritual, educational events, participatory performances, discussions, workshops, ceremonies, and more this April/May 2021. Megan is organizing the Fat Body Positive Performing Arts Showcase on April 11th and April 18th. Here, she discusses the discrimination she experienced as a young fat dancer, how that prompted her to start Shapes and Shades Dance Company, and why she is committed to curating and creating spaces for fat and body outsider dance artists.

Note: Throughout April, Stance on Dance is featuring interviews with some of the organizers of the inaugural Inclusive Performance Festival, a wildly diverse group of artists, activists, free-thinkers, and creative rabble-rousers. Emmaly Wiederholt, editor of Stance on Dance and author of this interview, is one such rabble-rouser, and has enjoyed the opportunity to profile some of the other folks involved. 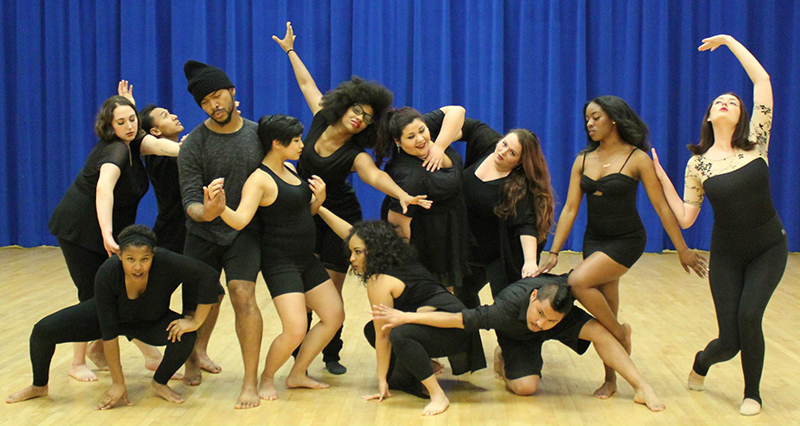 Can you share a little of your performance history so folks can get a sense of where you’re coming from?

Like most kids, I started performing in front of my family. I grew up in Orange County and we were pretty poor. Dance classes weren’t something my parents could invest in. I had a couple opportunities to dance here and there for a few weeks at a time, but I didn’t have a performance background until high school when I could take dance in lieu of PE. In elementary school, I would grab my neighborhood friends and make them perform, or I would teach kindergarteners dance routines to perform at lunch. Stuff like that. Everything I did was hip hop back then. In high school, my friend was the leader of Black Student Union and insisted I be in his choreographies so I became the only white girl in BSU dances. However, there was a class called Dance Production that I couldn’t be a part of because I was fat. The teacher directly told me I’d be so great in dance if only I’d lose weight. I really wanted to please her, but instead of changing my body, I tried to please her with my dance steps.

Out of high school I went to community college and started taking tons of dance classes. Voice was supposed to be my major, but I was taking the maximum number of units every semester of dance classes so I could dance, perform, and choreograph. I took all the styles of dance they offered.  The hip hop teachers were the ones most drawn to my stuff and pushed me more.

It took me a long time to finish community college because I kept having to stop and restart. But I took every style of dance I could. I danced regularly from age 18 to 20 but would get tired of teachers commenting on my weight and costumes not being right. Eventually I just stopped dancing and went into the work force.

When I went back to college, I secretly went back to dance and didn’t tell anybody. It was just one hip hop class, but I was so close at that point to getting my Associate in Arts degree in Dance, I figured I might as well. Immediately I was back where my heart was. I completed other AA degrees as well, but the pushback I kept getting about being fat created something defiant in me, so I decided to apply to a four-year college program that would allow me, a fat person, to dance.

I ended up at Cal State East Bay in the Bay Area. A big part of my story is Big Moves. I danced with them and was able to choreograph with them when I moved to the Bay Area. When I attended an open rehearsal to audition, I’d never been to a dance class before where someone my size wasn’t in the back of the room. I didn’t realize how important that was to see dancers who looked like me. It was empowering.

How did Shapes and Shades Dance Company get started?

When I was at Cal State East Bay, I knew I wanted to choreograph. I asked one of my professors, Nina Haft, if I could choreograph for a special project or anything, and she had a platform in her class to do just that. I started working with dancers who were in school with me, and outside of school as well.

In community college when I was getting that pushback about losing weight and then when I went back to school as an older and much fatter dancer, I decided to create a piece about my body. It was the first choreography I did that directly addressed my body. Before that, it was like a secret even though it was very apparent. The piece was called Magical Bodies and I first choreographed it on myself and dancers in my community college classes. I then rechoreographed it on dancers at Cal State East Bay. That’s the piece that founded Shapes and Shades Dance Company, and it is still evolving.

When I started choreographing in Nina’s class, I started linking up with different dancers and eventually began working regularly with a few dancers. I proposed starting a company. I talked to my professors, Nina and Eric Kupers, and asked them when the right time was to start a company, and they said, “Now.”

I started researching how to start a company. It started as five members in 2015 and eventually grew to 14. We were so diverse that we called ourselves Shapes and Shades. Magical Bodies was one of the first works that pulled us together. 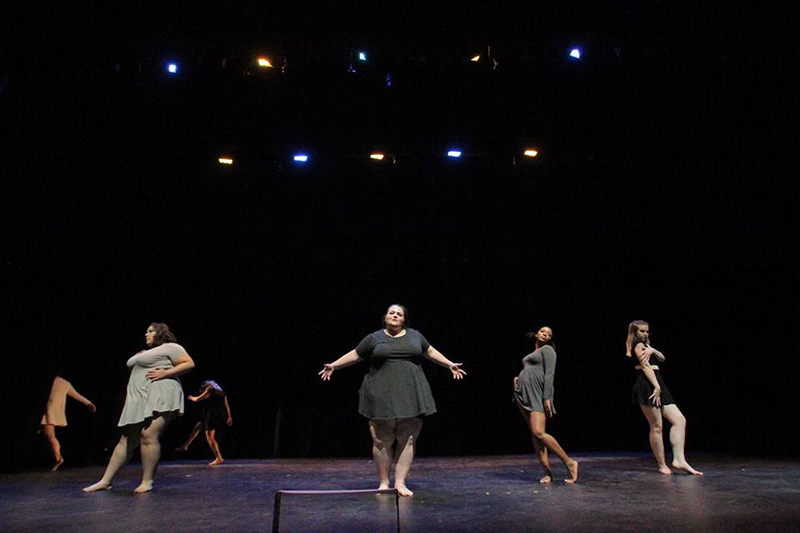 Image description: Six dancers are onstage. One is in the middle wearing a gray dress. Her feet are together and her arms extend to the side. Two dancers to the right pose holding various body parts. One dancer to the left similarly poses holding her ribs, while two dancers in the left background appear to be moving offstage.

Magical Bodies structure has fluctuated so much. It’s had several renditions; every time we perform it, it’s been different. The first rendition was a solo, and then a quartet. We first used only a piece of music, and then at one festival I had the opportunity to work with the fat disabled poet Nomy Lamm. Her words inspired the movement. The piece now has group sections and solos, all around the theme that our bodies are sacred and magical just the way they are. There are all these ideas about how we should be living in our bodies, whether it’s who we’re attracted to, how we perform gender, or what attire we wear. The piece explores that in different ways because it’s had different evolutions.

One other piece I want to mention is a spoken word piece I choreographed about drug addiction called Watching You Lose You. It starts out with these tableaus that explore familiarity and comfort, and then goes into some improv, and then there are sections of hip hop-based choreography. The movement plays off poetry about losing a person to drug addiction. Everybody has watched someone lose themselves one way or another, or if they haven’t, they will. An audience member came up to me after a show once and said it reminded them of their daughter. I was really impacted by that moment, that someone found something meaningful in my work, and if not, just by seeing someone who looks like me and my dancers, they can see themselves in the work and find something relatable.

Can you share what your involvement with the Inclusive Performance Festival has been?

Last year, in the middle of the pandemic, I put together a virtual show with artists I’d mostly found online. I curate my social media content to reflect bodies and dancers who look like me. I was trying to build a network of fat dancers and people outside of body norms, so I put together a festival with 15 performers, some of whom I knew already and some whom I’d never met before. At one point Eric and I were talking about planning a whole festival for fat dance and body outsiders, but it didn’t come to fruition at the time. Then Eric asked me to be part of this Inclusive Performance Festival and to include fat bodies.

I reached out to people the same way I did last summer and put together the Fat Body Positive Performing Arts Showcase, to be performed online on April 11 and April 18th. There are several people performing and they’re excited. The pandemic has a lot of us spread out, so I’m hoping it’s an opportunity for folks to come together. Shapes and Shades will also be showing work. All the performers and companies are body positive. It’s a rich gathering of people.

Why are spaces like the Inclusive Performance Festival important for people whose work falls outside of mainstream aesthetics or identities?

In recent years, there’s been a little bit of social change around fat dance. There are more fat dancers on social media that weren’t there before, but it’s because there’s no place for them elsewhere. When I started dancing with Big Moves, I’d never heard a lot of their ideas and politics around fat acceptance. Platforms like that offer opportunities for people who are outside of what’s considered a “dancer” body. They are vital. If the only thing you’re passionate about is not accessible to you or you can’t even envision it, these inclusive spaces can inspire you or at least make you feel like you’re not alone. These spaces are so important. If I didn’t have these spaces, who would see me? Who would see it’s okay to look like me and do this? 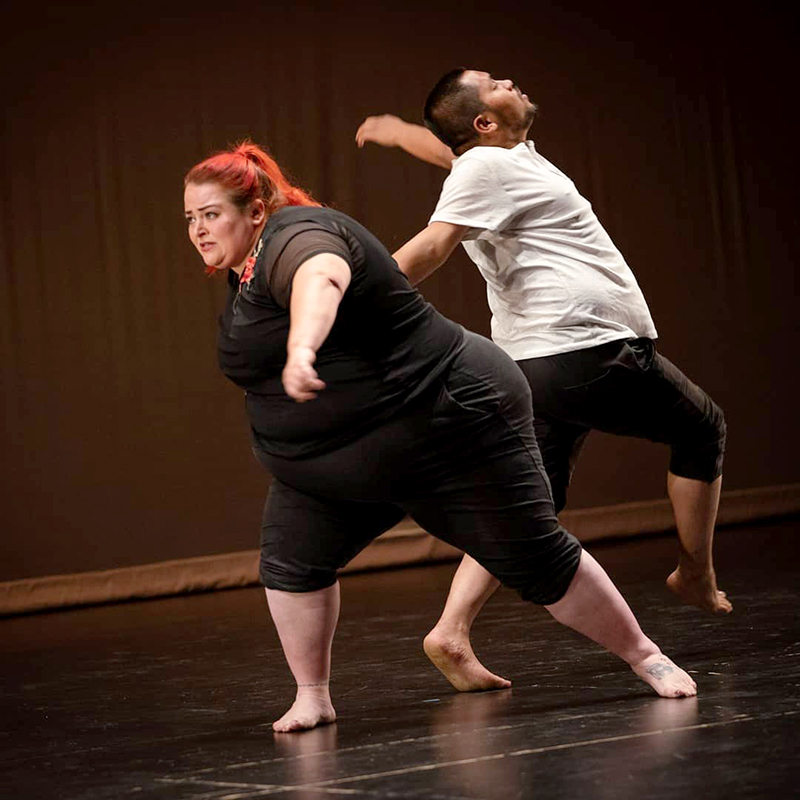 What’s next for you in terms of your own work?

Right now, I don’t know because I’m in flux. I moved back to Southern California to care for my uncle for what I thought would be six weeks but ended up being eight months. I know I want to continue to hold and create space for fat people and body outsiders to connect in dance. But as far as even where I’m going to live, I’m not sure right now.

I hope to see more visibility. TikTok has been a big thing. There are so many fat people I’ve seen moving; social media has exploded fat dance. Lizzo has become a cultural icon. I just want to continue to see that change.

To learn more about the Inclusive Performance Festival, visit www.dandeliondancetheater.org/inclusive-performance-festival.