An Interview with Frances Chiaverini and Robyn Doty

Frances Chiaverini and Robyn Doty initiated Whistle While You Work in 2017, an online platform devoted to reporting sexual harassment and discrimination in the dance and performance world. They discuss some of the systemic issues they are up against, and how education is key. 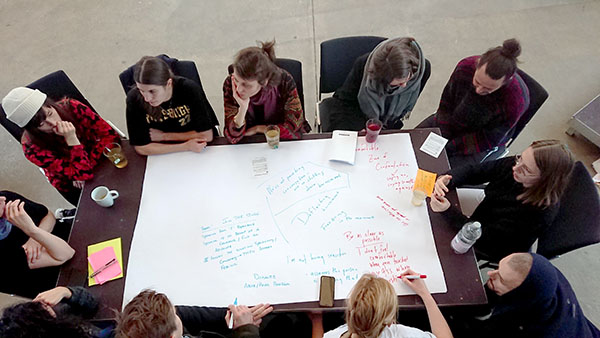 Tell me a little about Whistle While You Work and how it got started.

Frances: I’m a dancer, and Robyn’s a writer. In the fall of 2017, I was performing at the Venice Biennale, and met a lot of dancers as well as people from the visual arts world. I heard many stories, mostly from the visual arts world, about women basically being disrespected at work by men, specifically women in positions of power being belittled. It made me think of the stories I always hear in the dance world, but in dance those stories are normalized. I thought there should be a public registry where women can share stories so they become heard rather than just whispers that one friend tells another in confidence. I went back to Frankfurt where Robyn and I both live. I talked to her about it because she’s been an activist for a long time. I asked her what she thought, and she said, “Let’s do something.”

Robyn: So much of this happens in silence, we wanted to invert that and make it public. It’s not about exposing stories that survivors want to keep anonymous, but starting a larger conversation. We’re here to facilitate that. We started open forums where we don’t bring answers to people, but we bring questions. We want the dancers, choreographers and teachers to have a discussion.

Frances: I’m lucky to have a fellowship at a choreographic institute in Germany, so I have a bit of room, time and money in my schedule to devote to this project. We were recently able to go to Essen [Germany] and ask an institute there if they would be interested in supporting us, and they said yes. We put on a forum and presented a free library. There was also an artist summit going on with 30 artists from Germany, so we injected into that conversation the questions from Whistle While You Work, and we received good feedback and came to new conclusions. Just a few days ago, the term “intersectionalism” came up, and most of the people at the discussion didn’t know what that was. It was a great opportunity to talk about it.

Robyn: We also made materials, like an informational zine about what to do if harassment happens, some phrases you can use in the moment, and ways of self-healing. We also fielded questions to the dancers and performers at the summit, and came up with a series of direct responses to harassment.

Frances: The usual response is deflection or freezing, not saying, “When you touch me like that, it makes me feel uncomfortable. Please stop.” We found that, in the moment of harassment, the victim doesn’t want to open up a conversation, they just want harassment to stop. A conversation can occur later when the situation is more neutral and the victim no longer feels threatened. It’s a question of how you deal with harassment and discrimination in a practical way.

[Check out the online zine here.] 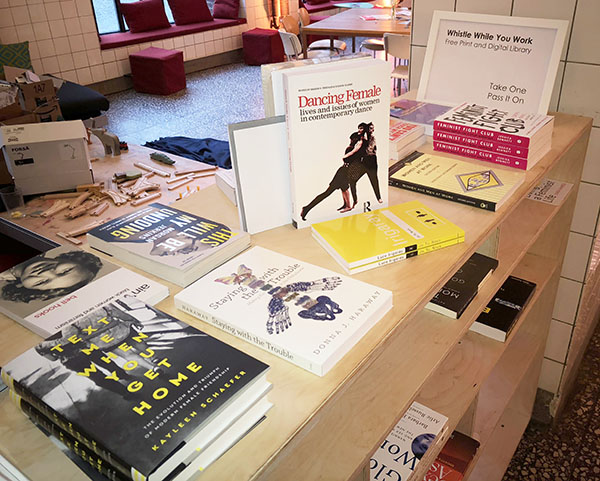 Free Library at the Tanz Platform in Essen, Germany

What kinds of responses have you received? I heard about your work through a Washington Post article that didn’t sound like the site has been as effective as you’d hoped. Has that changed since that article came out?

Frances: That’s exactly right. The reporter had asked the same question, “What’s been the response?”, and I told her that I was hoping more women would take advantage of the opportunity. Since that article was published, there have been a few more submissions, but the stories that provoked me to start the registry haven’t yet appeared. I’ve heard from several women that they don’t want to relive the situation, that it’s traumatic. They feel like they’ve dealt with it and moved on. Others just don’t know what the use of telling their story would be.

Robyn: Another part of it is, in the open forums, we often ask: What is abuse? It came to our attention that some people aren’t exactly sure what abuse entails, and thus don’t know it’s happening to them.

Frances: Yeah, a lot of dancers I’ve spoken to, after they told me what happened to them, I said, “You know that’s not okay, right?” And they looked at me puzzled. One dancer even said, “Well I think it was a little bit my fault, so I don’t want to tell anybody.” It wasn’t her fault. People have yet to identify what these infractions actually are, which is why we want to educate people through the public forums and create the conversations, to find out where they are in their thinking process. A big issue is the culture of dance training; it’s steeped in subordination.

Robyn: These are systemic infractions and violence. Women might think: “That’s just how it is.” People don’t often have enough distance from a negative situation to recognize they are in an abusive relationship with a choreographer, director or fellow dancer. That’s why we’re interested in facilitating conversations to help dancers identify what is and is not acceptable. Oftentimes, one person’s boundaries are used against another person. We hear, “Well I’m fine with it, so I don’t know why they are having a problem.” Boundaries are different for different people and need to be respected.

What happens to the stories that are shared?

Frances: We haven’t had any personal accounts shared in the forum yet. We’ve heard stories of things that happened in companies or schools to other people. But even then, what’s shared in the forum stays in the forum. Nothing is published from it. Things are only published online if you write your story to our website whistlewhileyouwork.art. Even then, you can specify whether or not you want it published, and whether or not it should be kept anonymous. When you submit to the registry, you are in complete control.

It sounds like there’s a therapeutic element you’ve come up against. How have you dealt with that factor?

Frances: We met a choreographer in Essen who is also a psychologist, and she offered her help. It’s so subjective. I’ve had some people write to the registry and say, “Thank you so much. In writing this, I was able to get perspective on the situation.” I’ve had other people say, “I don’t want to relive my experience and write it down.”

Robyn: One of the things we offer in the zine is a list of resources by country, including Germany, France, the UK, the US and Spain, so people can find support where they need it. People can also write to us and ask for resources.

Frances: We’re not exclusive to women. We’re talking about the bigger picture and the discrimination on all levels that comes along with power structures. We try to take an intersectional approach. 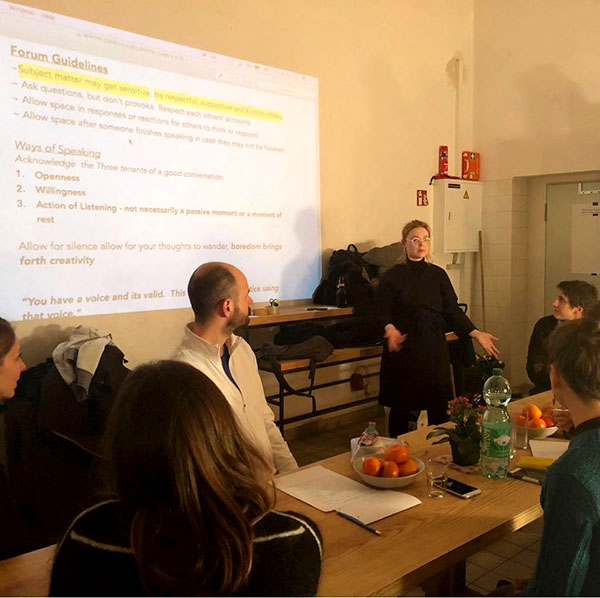 Robyn at the Frankfurt Open Forum

Frances: As part of our free library, we give out USB sticks with digital materials. One of the podcasts on it was produced by Hidden Brain, and it talks about power. One of the conclusions they reached is that the nature of power is that people abuse it.

Frances: One of our colleagues, Katja Cheraneva, asks questions about ownership of the body. She believes a lot of these problems stem from the fact that dancers are trained not to have ownership of their bodies. Their bodies go from being the teacher’s property to the choreographer’s property to the company’s property. If we can incite even a little change in how training is approached in dance, we believe there will be a ripple effect.

Frances: The first forum we held was in Los Angeles, and we had representation from all kinds of dance. But, the only woman there from the ballet corner had already retired and was an administrator. The whole group eventually came to the conclusion that the ballerinas were the ones who needed this information the most, but they were the ones who wouldn’t show up because they didn’t think it applied to them.

Are there geographic areas that are more responsive to your work than others?

Frances: Interestingly, we’ve been getting a lot of communication directly from Canada. There’s a lot going on there right now. At Les Grands Ballet Canadiens in Montreal, they were producing and promoting a festival called Femmes, in which they commissioned three white male choreographers. The dance internet went crazy. One choreographer stepped down in solidarity with women and underrepresented groups in choreography. Kathleen Rea, a woman there who has been a champion on these issues, started a petition to call attention to the questionable artistic direction. In response, the company invited her in to have a conversation. As a result, the director changed the name of the program to Parlami d’Amore, Italian for “talk to me about love,” and hired another male choreographer. He defended himself by saying he would have another program later with women choreographers.

In Belgium, Ilsa Ghekiere of Engagement Arts has funding to conduct research by collecting interviews with women on their situations and then writing articles. She hosts a weekly talk in her community, and is actively trying to come up with concrete ways that things can change.

How would you like to develop your work in the future?

Frances: We want to apply for funding from Germany to put more time into this. I still dance and Robyn still writes, so we’d like to have the funds to make this work more comprehensive. I want to have a growing network of facilitators who can lead forums and workshops in universities and schools, empowering young dancers. 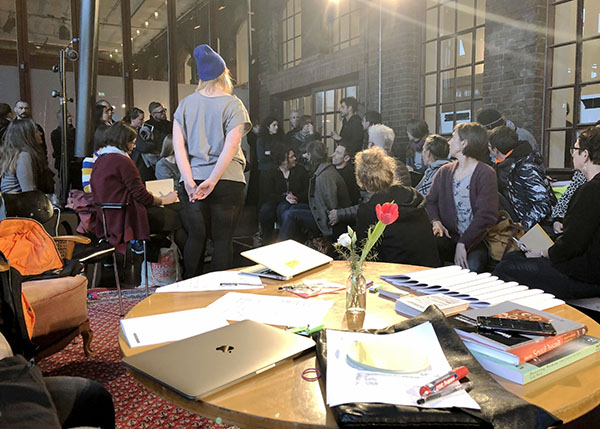 Robyn: It would be amazing if more dance companies were interested in getting on board. We want to get into more institutions. We ask in the open forum what is the responsibility of the institution. Where is the accountability? If someone does make a complaint about a director, oftentimes it’s ignored or neglected. That needs to change.

How has delving into this issue of harassment affected other areas of your work?

Frances: I’ve become a lot more outspoken. It’s easier for me to take a position, and I feel more empowered. I have more information at my fingertips. It does make me think about what kinds of jobs I want to take as a dancer. Unfortunately, it limits it; there’s less opportunity when it comes to working for other people. Conversely, it’s inspired me to make more of my own work. I started a process with a dancer in LA about a piece on this topic.

Robyn: I’m currently writing about social media and social movements, and how they show the power of a community taking on an issue. It takes so much time to put all the necessary information and resources online. It makes me realize how much needs to be easily referenceable.

Robyn: We want to give a shout out to other organizations like Engagement Arts, FCNN and Guerrilla Girls who address harassment and discrimination. We don’t want to work in isolation. That’s not even a good idea. We want solidarity and alliances. 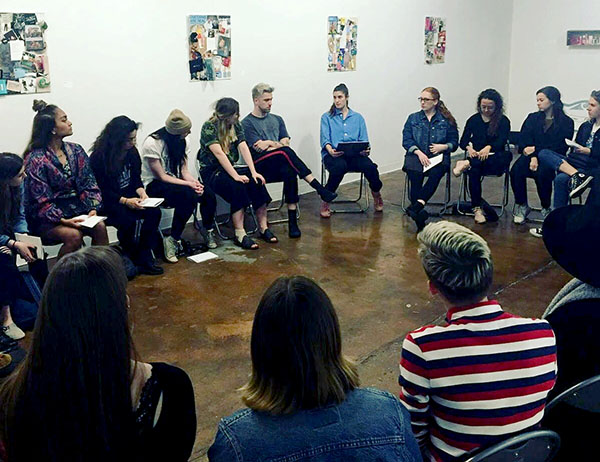 Frances at the LA Open Forum

To learn more about Frances and Robyn’s work, visit here.