Isabel Cristina Jiménez is a plastic artist and butoh dancer in Bogotá, Colombia. Isa graduated from the Academy of the Arts Guerrero-Bogotá in 2014, where she studied plastic and performative art. She was introduced to butoh in 2010 by Ko Murobushi, and has studied with Brenda Polo, director of Manusdea Antropología Escénica. She has participated in various butoh laboratories including, in 2014, a residency at Casona de la Danza. In 2016, she won the Bernardo Páramo prize. She also participates in solo and collective art exhibitions; in 2017, her work was exhibited in Pascual Noruega. 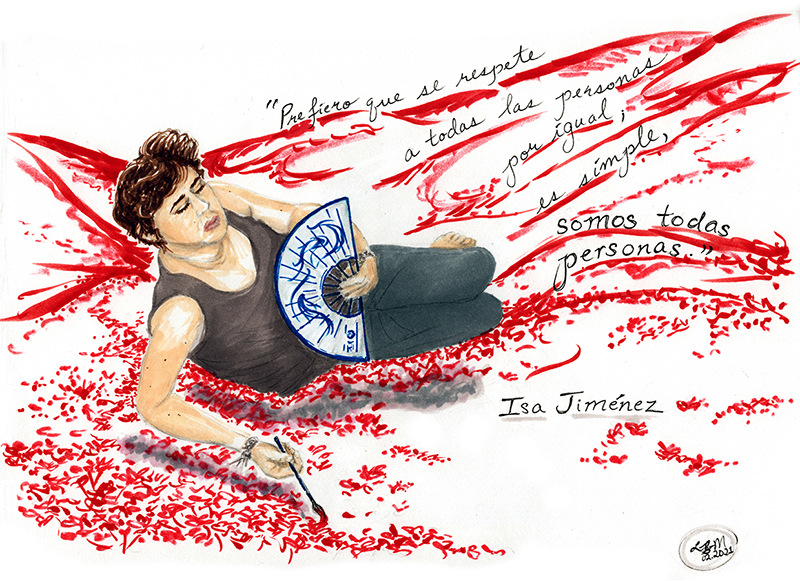 Image description: Isa is depicted lounging on her side propped up on her right arm in a hillside of red which she is painting with a paintbrush in her right hand. Her left hand holds a blue fan to her chest. The quote, “Prefiero que se respete a todas las personas por igual; es simple, somos todas personas” (translation: “We should respect everyone equally. It’s that simple; we’re all people.”) sits on the red hills.

I took my first butoh workshop in 2010 with Ko Murobushi at the Universidad Nacional de Colombia. The workshop was called El Poder Oculto de la Memoria (The Hidden Power of Memory). In the workshop with Master Ko, we jumped, fell on the floor, laughed, and hugged each other. I especially liked the exercise called “the feline,” where everybody walked around as if we had one eye in our heads. In another exercise, we dropped to the floor as if dead, and then watched each other from the viewpoint of death. Many of the exercises were hard for me, but I did them the best I could.

In 2012, I participated in another butoh project called Chaturanga Hamlet at the Academia Guerrero. We started the creative process with Professor Juan Manrique by drawing on square pieces of wood in black and white ink. Then we assembled a chessboard out of the drawings, which we used in the dance. Each one of us moved on the chessboard like the different chess pieces. We used white makeup on our faces and hands – Professor Adriano applied it with his airbrush. It tickled! Professor Ximena Collazos did our costumes, dressing us in black plastic with red tulle on our heads.

In that project, all the women played the role of Ophelia. Ophelia throws herself to the floor, opens her jewelry box, and begins putting on her jewelry. There were a lot of movements associated with the jewelry scene. Ophelia hides her face with her Japanese fan. We (the Ophelias) said: “I’m crazy with love,” and, “They have broken your heart,” as we pulled our hair with our hands and ran around the stage on tiptoe. My hair was short, so I pulled it as much as I could. Then we fell, as if fainting, and our princes cried for us. Sixteen of us participated in Chaturanga Hamlet. It was a wonderful process. A lot of us fell in love – me with Caliche (Carlos Rojas) for example. In 2013, Carlos and I got more serious, and we’re still together.

Chaturanga Hamlet was presented in Bogotá in the Academia Guerrero at the Teatro Libre. I was a little nervous; it was my first time in a theater. But my co-performers and I pulled together and concentrated, and when we entered the stage and began to move, the nervousness left me completely. We also presented it in the Zona T – a street in Bogotá – and in the Teatro del Ágora in the Academia Guerrero.

In 2014, we did a nine-month butoh residency and performance called Odds (which stands for “opportunity” or “advantage”) in the Casona de la Danza in Bogotá. We worked with Victor Sánchez, Lorna Melo, Ximena Feria, María Teresa Molina, Nicole Tenorio, Fernando Polo, and Brenda Polo. The training was very difficult. I often got up at 4:30 a.m. in order to get to the studio by 7:00 a.m. We jumped, did turns in the air, practiced the “prayer,” the “egg,” and the “worm.” We fell to the floor. We explored what it was like to disappear into the windows. We experienced the feeling of being trapped. We sweat a lot during the practices!

The residency was hard for me, but I didn’t give up. My colleagues helped push me. But in fact, I didn’t want to stop. Every day I felt better. I loved jumping, feeling the tremble in my body, feeling good energy, concentration, breath. I felt free. We left each practice exhausted and sweating, but happy with what we’d done. The residency was also good for my work in the plastic arts – I painted two butoh dancers during that time.

In 2017, we did the performance La Metamorfosis with a grant from Bogotá Diversa for the group En-Trance. There were 30 of us – different ages, from different areas. There were even some children from a foundation. And a lot of people with diverse abilities. We helped each other constantly. There was always someone to help a person in a wheelchair by carrying them up to the third floor (there was no elevator), or helping those who had visual impairments climb those stairs each day.

We’d arrive at practice and immediately make a circle on the floor, each one of us in a star position (arms and legs extended) with feet touching. We’d breathe deeply together. There were people in wheelchairs, people with crutches, people with visual impairments. It was wonderful dancing with them and learning from them. For example, I used a blindfold in order to move without being able to see. I felt dizzy, and a little scared, but not much. With my eyes blindfolded, I could actually feel more.

We did our first performance in front of the Museo Nacional de Colombia. Later, we performed in the Plazoleta of the Universidad de Jorge Tadeo Lozano. The freedom I felt when we performed in the street was wonderful. There were so many emotions at once: moving my body, feeling the space around me, being outside, and performing alongside my friends. We all felt so happy doing this creative work together!

Our next project is called El Agujero Negro. We’re going to start it online at first, because of COVID-19. I’m anxious to move again and to feel that freedom again!

I practice butoh with Brenda Polo. I also draw and make paintings. For me, both are important. Dance is a form of therapy for my body, because it makes me feel more alive, energetic, and free. And then I like to express those experiences by painting the human figure – nudes and dancers, and my life in Colombia. In my work you can see a lot of paintings of dancers, especially women.

People congratulate me. They say: “What beautiful dancing. I like your dancing!”

If I see a person dancing in a wheelchair or with crutches, I think, “These people can dance. They can feel their arms, their bodies.” Seeing people with different capabilities dancing is cool. It inspires me to continue my practice.

People who don’t know anything about dancers with disabilities might be surprised to see them dancing, but they’ll also feel proud. They might feel freedom. They’re going to have positive responses.

Yes. Having mixed groups enriches everyone. I also think that grants and scholarships should be for everyone, regardless of ability, and that everyone participates together. What’s important is the person, and what she wants to achieve. People with different abilities and no money can also dance and achieve their dreams with much success.

Yes, there are more opportunities than before, but I wish there were even more.

For me, drawing and painting are like therapy. But dancing is different. Dancing is feeling my body, feeling the vibrations. Dance is freedom. It’s a unique sensation. Now that we’re unable to go out and dance together due to the quarantine, I really feel that need.

When I can’t dance, I feel discriminated against. It’s like a form of bullying – it makes me feel trapped, like I can’t move. There’s no movement in my body, no vibration. When I can dance, I feel space and freedom. 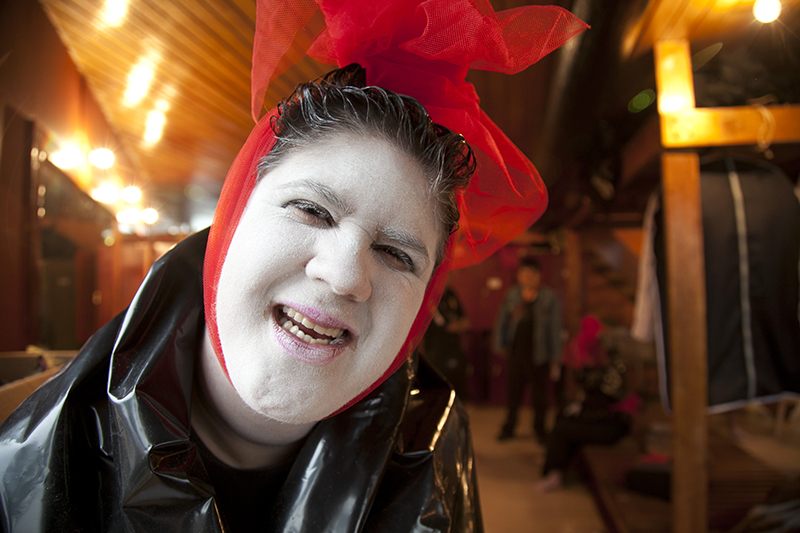 Isabel Cristina Jiménez, Photo by Ernesto Monsalve
Image description: Isabel leans into the frame and smiles. Her face is painted white and she has a big red bow tied atop her head. Other people and lights are blurry in the background.

This interview was conducted in March 2020. 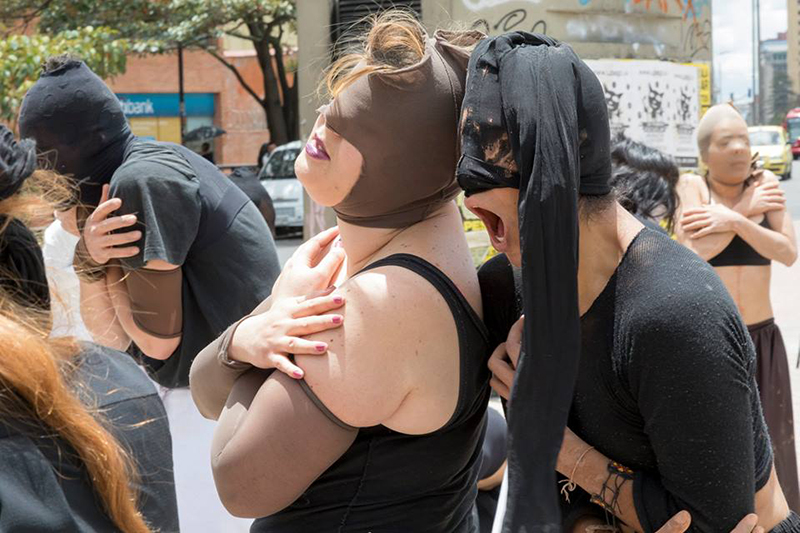