An Interview with Robert Moses

Robert Moses is the choreographer, founder, and artistic director of Robert Moses’ Kin (RMK), a dance company based in San Francisco, CA. 2020 marked RMK’s 25th anniversary and, to celebrate, Robert has launched a series of dance films and virtual classes/workshops, as well as embarked on a new project. Here, he reflects on the difference working virtually with someone he’s worked with in-person versus someone whom he has only known online, how virtual is changing the landscape of audience engagement, and some insights into 25 years of running his company. 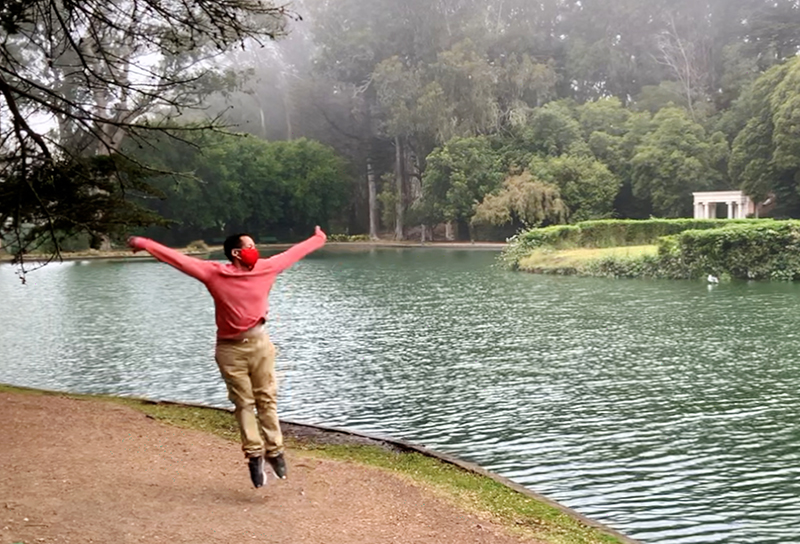 You have a string of COVID-adapted events going on right now. Do you first want to share a little about the idea behind RMK Around the Bay and how that idea grew into a video series?

For our 25th anniversary, RMK Around the Bay was our way of reconnecting to audiences by performing in all the counties of the Bay Area in as many small venues as we could. Normally, we’d perform for two weeks in a large venue and spend $20,000 or more. At a lot of these smaller venues, we could perform for a fraction of that price, so the idea was to perform in more places and more of the Bay Area would get to see us. We wanted to touch base with people we might not have seen for a while. RMK Around the Bay was our version of a season, but rather than being over a weekend or two, it would be over the course of several months.

We’d done maybe three or four performances when the pandemic hit. I had a responsibility to the dancers through September. We could at least figure out a way to rethink our season. We stayed with RMK Around the Bay, but the first thing we did was produce a dance film called “For Our Students, For Our Schools” benefiting kids in the San Francisco Unified School District. That was a lot of fun; everybody jumped in right away.

We ended up making four more videos: “The Road to a New Hope,” “Unmarked,” “Untitled Elegy,” and “Draft.” I sent the dancers prompts and existing material. From that, we created something new. 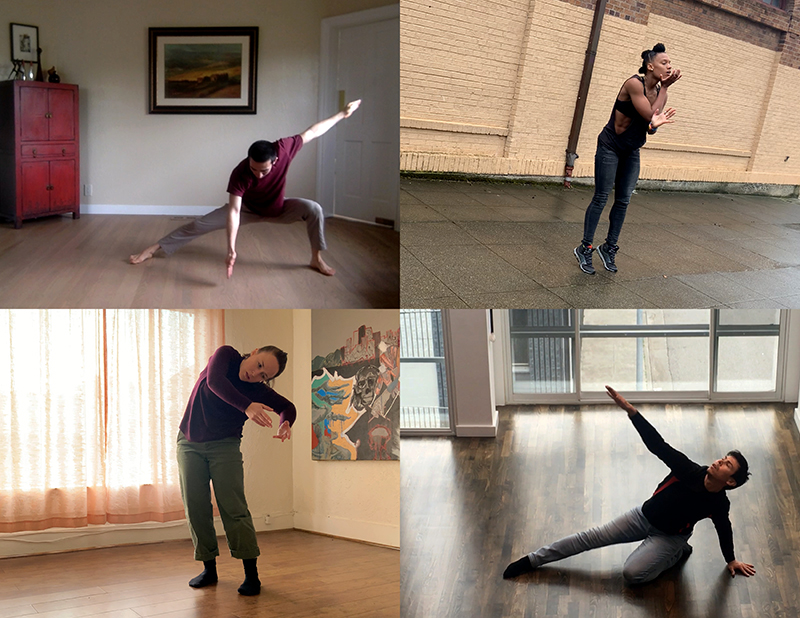 And now the video series is expanding into RMK Around the USA. Can you share how you are putting those films together?

RMK Around the Bay morphed into RMK Around the USA. We’re beginning to understand how to use the video medium, the reach it can have, and its effect on the work. We decided to expand the concept around the US. We put out a call for solos and duets. For the people we’ve selected, I’ve fallen in love with whoever they are and that’s why I want to work with them. The first submission we got was a tango couple in Seattle, who it turned out I’d met previously.

I’m using the same process as RMK Around the Bay; I send material to these folks. We have three rehearsals to create the work, and they rehearse on their own between each rehearsal with me. Each session is about 45 minutes to an hour. The first rehearsal is just us getting used to each other. We have a quick conversation about not being nervous around each other because whatever they’re doing is exactly what I’m interested in.

RMK Around the USA has a few videos ready to go right now, and they feature dancers in Seattle, San Jose, and Atlanta so far.

You also recently launched KINDance, a series of virtual classes and workshops. What was the idea behind it and what kind of response have you seen thus far?

We had a studio for a while that we closed a few months before COVID hit, but we’re still interested in managing and directing a program. With everybody running online, it’s exactly the right time to see if we can move our own programming online. We launched last September and expanded a great deal because we no longer have the brick-and-mortar infrastructure to keep up. I have 20 plus years of dancers to call upon as teachers, and they’ve said, “Yes, absolutely.” We have classes almost daily and monthly workshops, and we’ve had participants from as far away as Russia and France.

How has moving into virtual spaces changed the way you approach choreographing and teaching?

It used to be about being in the room with the people I was working with and getting nonverbal signals about the tone or vibe of the room, all the intangibles that come from being around flesh and blood people. But now we’re looking at avatars of each other. It takes away a lot of what’s essential to the learning experience, at least for dance as an art form. If the body is missing in dance, you’re missing so much you almost have to think of it as something else entirely. It’s a different kind of teaching and choreographing.

On the screen, dancers are managing their movement because of a floor that might be cement or a rug, or instead of having 40 ft. of free space, it’s maybe 10 ft. of space, and if they’re not careful they’re going to kick something. There are a lot of ways we have to rethink what we’re doing because this new thing is not what that old thing was. The first part is to accept that this way of teaching is not what we’re used to, and we have to figure it out. We have to stop pretending it’s the same thing.

In terms of the rehearsal process, it’s very different if I’m doing RMK Around the Bay or RMK Around the USA. If the dancer has been with me in the studio for a year, there’s a shorthand we share. But if it’s a dancer I’ve never worked with before, I’m not going to get the same response because we don’t have the same history. In that case, we have to come up with a common way of working. If we’re working together for the first time online and you’re imagining I’m going to be demanding, and I’m imagining you’re going to be brilliant, we have to get that out of the way and acknowledge we’re human beings working in this new environment and let’s just make this thing the best it can be.

Do you foresee RMK continuing to work in film and offer online classes after the pandemic? If so, what do you envision that hybrid model looking like?

We’re in a new world now. Everybody is doing this thing now. And this is not new, it’s just new to us, because we were pampered. We could tell people: I have an idea, and out of 365 days in a year, you have three nights to come see my idea in a little box that only will allow room for a couple hundred people at most. If you don’t see my idea on those nights and pay me, you’re going to miss it. We have been so spoiled.

Now we’re out here in a new world trying to survive like baby birds: “Nobody liked my video!” We’re figuring this out. This is the way it goes now. If people accept virtual as a valid way of seeing something and don’t have to go to Berkeley to see Nederlands Dans Theater on their once-every-seven-years tour of the West Coast, what happens to that part of the industry? We’re all going to have to figure out how to make virtual be a sustainable part of what we do without making it everything.

People like me who have been spoiled, who have had other people pay to adore us, we’re always going to do that stuff because we’re addicted to that validation. For someone to “like” something on social media or put three or four hearts doesn’t take any effort. It’s different than someone coming up to you after a show with tears in their eyes. A lot of what we do as creators is try to offer audiences something they can respond to. In that way, it becomes real, as opposed to something on a screen you can watch a million times, but after a while it wears. It’s not that experience that is gone after it happens and will never happen again. That’s the other side of being spoiled. People get to see something rare and validate their choice.

Finally, you recently received a significant grant from the Center for Cultural Innovation, with which you will be choreographing a solo on yourself. Can you say more about what you’re putting together for that project?

There are a few ideas running together. One is I’m thinking of building a new mythology. There’s Afro-futurism, but Afro-pessimism is more in my worldview. I’d like to redraw the lines of cultural understanding when it comes to icons and the way we look at people and understand them in particular cultures. I’m doing a lot of writing and reevaluating about the way we understand things politically.

I was thinking about the term “Uncle Tom.” I’m sort of a history buff, and I was also thinking about WWII and the Vichy French. What happened was they believed what they were doing was in the best interest of the nation and they had to somehow manage the population so there’d be no more damage. Could there be a parallel “Vichy Tom”? How would I re-frame that name? It’s in line with Uncle Tom because of the acquiescence. I’m trying to find parallels that speak to social situations that don’t leave people locked out of understanding a particular relationship of a particular culture to a larger culture.

I’m at the beginning. I’d like to have the piece done by late 2021. There’s a lot of writing to do. The physical part of choreographing is easier than shaping the conceptual parts.

Reflecting back on the past 25 years of RMK, what are some key lessons or take-aways?

Make more friends. That’s a big part of it – a lot of what we want to do is share/offer, and as creators, our problem is that we spend the majority of our intimate sharing time in a room with a small group of people trying to get at an idea. It’s important that you share that idea with as many people in as many rooms as possible, as opposed to some artists who think they need to hone their idea in order to touch someone. Spend time in more rooms with more people more often talking about more things in more ways.

One of the things that’s hard for creators right now is the sheer amount of volume that people are creating. There’s more stuff, and I sometimes wonder if there’s too much. There’s a lot of high-quality arts TV like Marquee TV, and then there are people dumping stuff on YouTube and other platforms. There are a lot of amazing ideas, but I wonder when people have the time to let all this stuff sink in and become something more. 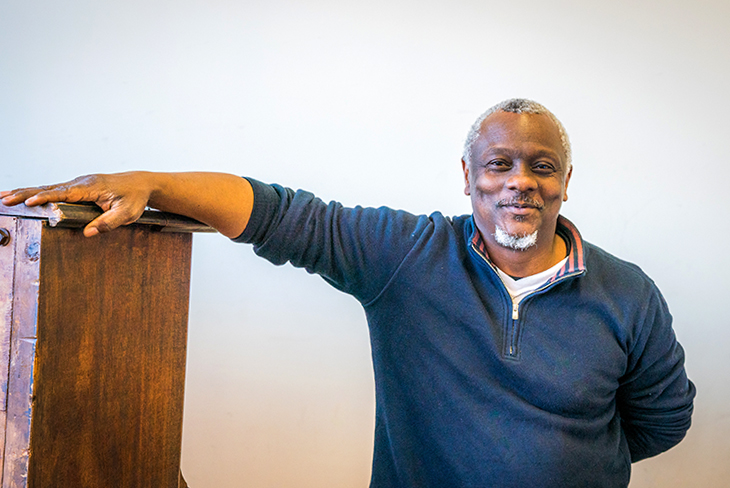