An Interview with Katherine Disenhof

Katherine Disenhof is the one-woman show behind Dancing Alone Together, a website she launched in March that has become a hub for the increasing number of virtual classes, performances and creative prompts being offered as a lifeline to dance artists during the coronavirus pandemic. Here, she shares how the website has grown, some of the unexpected ways it’s being used, and what she foresees is the future of digital dance. 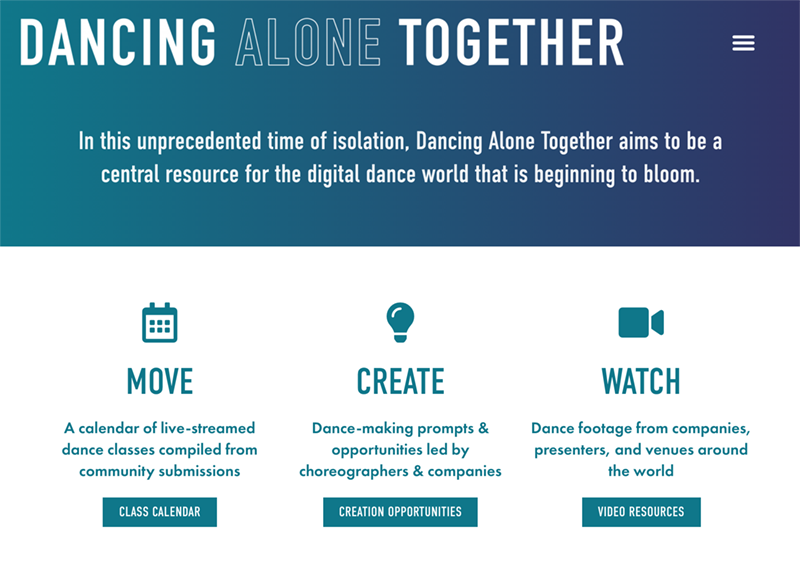 Can you share a little about yourself and your own dance background?

I grew up studying classical ballet just north of San Francisco. With that early training, I thought the only way to pursue a career in dance was to join a major ballet company. I knew I was not built for that and so I ended up at Stanford University studying Human Biology. I was working toward medical school but, halfway through my time at Stanford, my perspective shifted. I got exposed to more styles of dance and realized there was a lot I hadn’t explored in the dance field. Since there wasn’t a dance major at Stanford, I sought out all the on-campus arts opportunities I could and ended up learning just as much out of the classroom as in the classroom.

After college, I worked at Alonzo King LINES Ballet as the BFA program coordinator and later as a graphic designer. I also was dancing freelance in the Bay Area; the main company I performed with was Robert Moses’ Kin. As part of the dancer hustle, I picked up graphic design skills on the fly. In my first year at LINES, I started creating posters for the BFA program which led to me being brought onto the marketing team. For a while, I was working in two departments, but eventually transferred completely into marketing. That’s when I really began developing my graphic design work in tandem with my dance career.

In 2017, I got the opportunity to join NW Dance Project and relocated to Portland, Oregon. I’m in my third year now of dancing fulltime and continue to do graphic design freelance remotely for Bay Area clients. 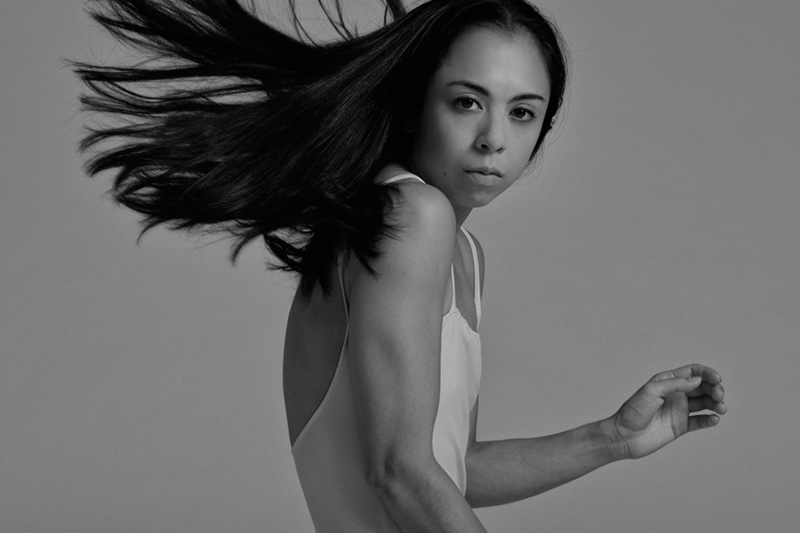 How did the idea to start Dancing Alone Together come to you and how did you make it happen?

The idea came pretty quickly after I found out that NW Dance Project was going to close due to COVID. It was optimistically a two-week closure at first. I was talking to some of the other dancers in the company about creating a central database that would collect the virtual dance classes that were starting to happen. They said that it was a tool they would use if it existed. I was seeing Instagram live videos and gaga on Zoom, but it was often not clear how to find out about the class, if it was on a dancer’s account or a company’s account, what time zone it was in, etc. There was a lot of information quickly starting to appear that I wanted to make really easy for people to follow. Three days after my layoff started, I launched an Instagram account and bought the domain name for Dancing Alone Together.

When I started, I didn’t think the volume of classes would become overwhelmingly large. It began with my reposting classes on the Instagram account one by one, but a day or two into it, I realized I needed to rethink my approach. I created a submission form on the website for people to let me know about their classes, as well as started posting a daily digest on Instagram to highlight some of the classes happening. And it’s grown rapidly from there.

What were the first reactions the site received and how has it evolved over the past month?

When the site first launched, there were about 20 classes a day. It was displayed as just a text list of classes. That evolved into an events calendar listing. I was using Squarespace until I discovered there were some limitations to how many events I could list. That’s why I recently rebuilt the site in WordPress.

Initially, many of the classes were on Instagram Live. I’ve noticed that they’ve been shifting toward Zoom, which I appreciate because teachers can have more interaction with the people taking the class. Also, Instagram has been crashing because I don’t think the platform was prepared for how live stories are being used in these circumstances. With the old site, people entered their class information into a Google form, and then I manually entered it onto the website. This turned into an enormous amount of labor on my part, as I’ve collected almost 1400 classes from submissions alone.

With the new system, people can directly enter their class information into the website’s database and the setup is more robust. There are two major benefits to this: classes can be sorted by style, date, as well as streaming platform. Additionally, people inputting classes can share more information. With an increasing number of classes on Zoom, jumping on a call can be intimidating if you don’t know much more than the class title and teacher’s name. Now people can share a short description as well as any costs and Venmo links. This also helps me in terms of the workload.

How many people are visiting the site and from where?

The website gets a lot of traffic. In the first week, it had over 100,000 unique visitors and that number has continued to grow. Almost 90 percent of visitors are in the US. There’s a big East Coast presence, though the West Coast is using it a lot too.

I’ve been approached by a few people about creating a European version, which I would love to do but just isn’t feasible with the resources I have right now. I’m hoping the new WordPress site makes it a little more global. For example, there’s a function that displays the local time of the class so that, depending on your computer’s location, it changes the time from Eastern Standard Time to the local time of the user. Things like that are what I’m doing to try to make the site more accessible beyond the US. 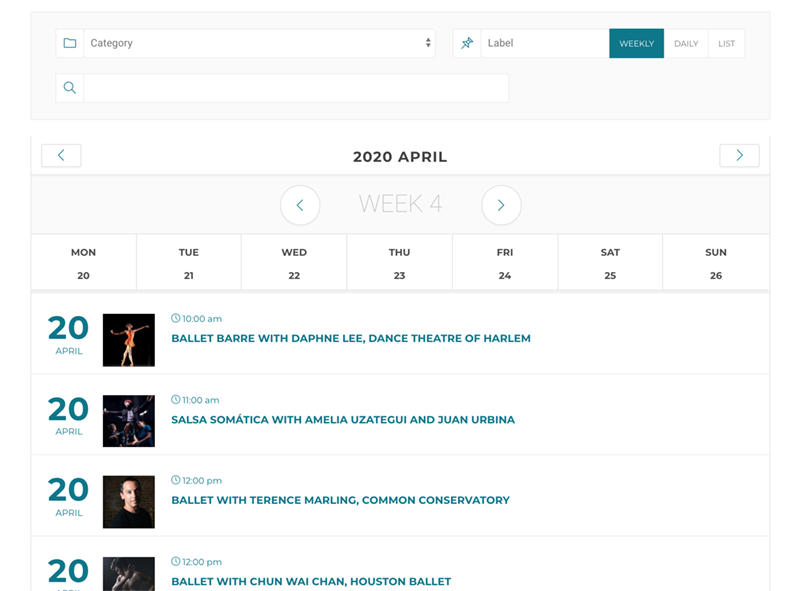 What aspects of the site see the most engagement? The classes, performances, or creative prompts?

Largely the classes, which is to be expected. It has been interesting to see different dance styles become available, like Bollywood or African dance, which often aren’t as visible in certain dance communities. It creates a more even playing field in terms of access and relevance.

What has surprised you most about Dancing Alone Together?

The speed of it; the site is just a little older than a month. That and the number of classes. The community quickly rallied together and adapted. Every corner of the dance world is jumping online.

One thing I didn’t expect was for the site to be used extensively by college professors and their students. Dance professors are struggling to create online curriculum. I’ve heard that some school programs are not allowed to use Zoom due to privacy restrictions. Some academic professors have been sending their students to my site to find a class to take daily, rather than figuring out how to stream their own classes on another platform.

When the pandemic finally wanes, what do you see happening to Dancing Alone Together? Do you foresee the demand for virtual classes continuing?

My initial thought was to shut down the site after the pandemic but, as the weeks have gone by, the feedback I’ve gotten has shown me that people are really taking advantage of virtual spaces. I do hope we go back to our studios and to dancing in real time together, but to have a handful of virtual offerings would make a big difference to people who are often left out of dance programming.

I do think the dance landscape is changing. Given these circumstances, dance companies are forced to embrace the digital age. The social media person at a major dance company is usually the youngest on staff and is fighting for a budget, but right now these are the people who can make a big difference.

How can folks support what you’re doing?

I have donation information on the website. At this point, it’s just me running this. I am happy to do it because I love having something to work on, otherwise social distancing would be a big challenge for me personally. I’m going to keep it going as best I can, but there are donate links on the site if people feel like they’ve benefited from my work.

Dancing Alone Together is focused on livestreamed classes, though there are prerecorded classes that are available. I’ve gotten the question a lot why I am not including prerecorded classes on the site. The main reason is that I am trying to preserve the live factor of dance. Bodies in motion are ephemeral. My contribution is to focus on live opportunities and create that community effect in this time of isolation. 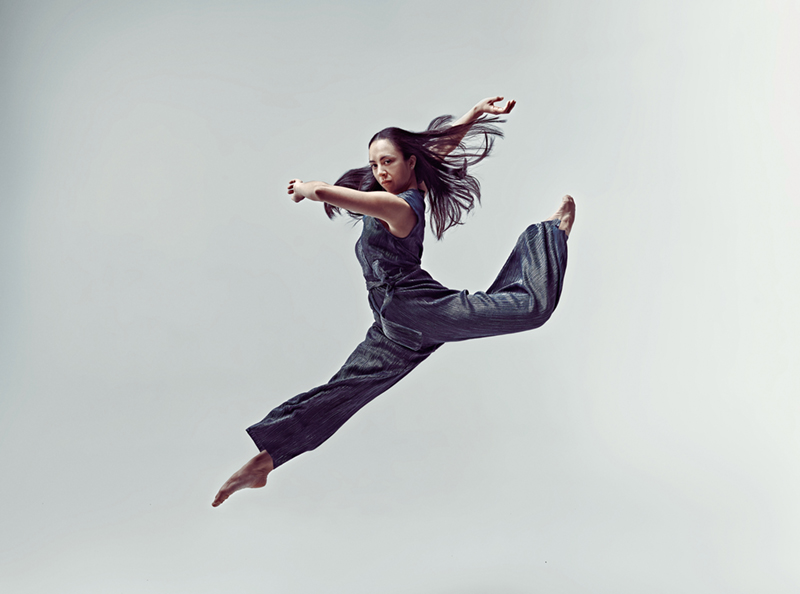