An Interview with Tiffany Tjosvold

Tiffany Tjosvold is the executive director of Embrace, an organization in Victoria, BC, Canada devoted to creating meaningful artistic opportunities for individuals of all abilities. Here, she shares the breadth of Embrace’s programs and the impact it has had in Victoria’s community. 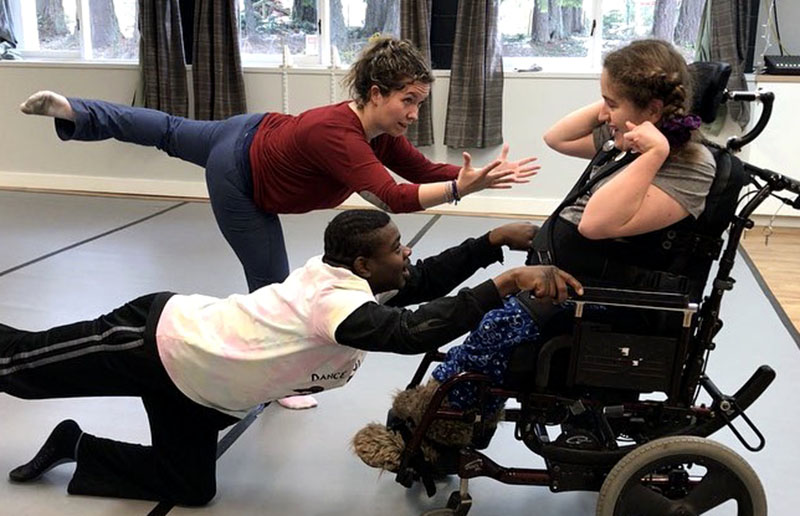 Can you share a little about your own dance history – what kinds of performance practices and in what contexts shaped who you are today?

I grew up in the classic studio context; I did ballet, tap, jazz and musical theater until I graduated high school. At the University of Victoria, I went into the Applied Theatre program, which was not a movement-based program but informed my movement training. At university, I suddenly became ill and stopped dancing because I didn’t feel like there was anywhere I could dance. All my movement became based in my own exploration at home.

In 2013, I went to the DanceAbility International certification teacher training in Uruguay. Most of my own practice since then has been in various forms of contemporary, contact improv, and collaborative group work.

How did Embrace get started?

When I became ill, I was really frustrated that my dance training stopped. Now, I know there were other people who I probably could have gone to, but I didn’t feel welcome to what I knew at the time. Around the same time, I was working in camps and schools with a diverse range of kids and teens. A precocious teenager with cerebral palsy, Luka Garvin, asked me to make a class for them. They have since become one of Embrace’s current board members as an adult.

I started running some classes, and it was so clear there was a need for more opportunity and a wider range of opportunity. I was running some recreational studio-based classes but found there were artists in the community who wanted to create shows. That’s how Embrace as an organization was founded.

How is Embrace Arts structured?

Embrace has two primary strains: Embrace Community and Embrace Performance. Embrace Community encompasses all our camps, school program, community events, and a large portion of our classes. Those are spaces for people to come and engage with dance, music or theater, and find what they’re interested in.

Embrace Performance is working with artists in the community who are looking to perform, rehearse, and develop their craft. We have a core group that has been involved in the majority of shows. These people were taking recreational classes and quickly expressed they wanted to be making dances, so we began training more together. Depending on the size and scale of the show, other people within the community might participate. 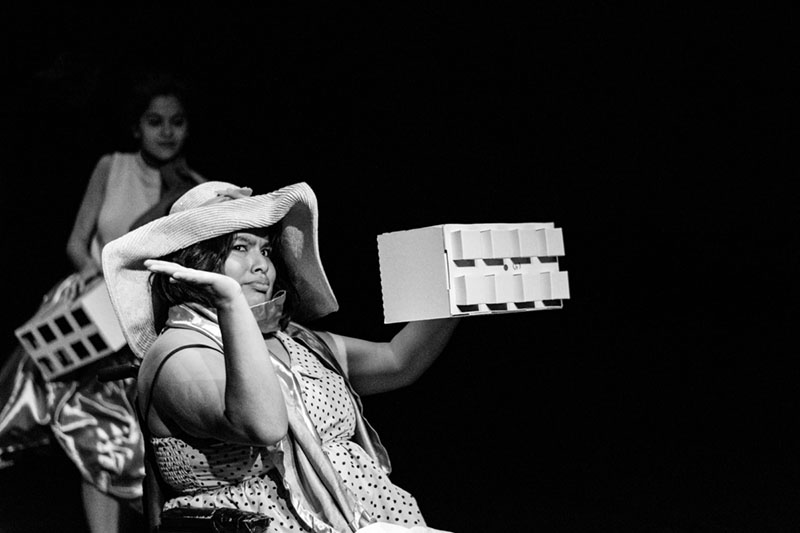 Pictured: Claire Bruce in the foreground, Serena Martin in the background, Photo by Noah Miller

The music side is part of our community programming and is run by a fantastic music therapist, Erin Koop, although I clarify that none of our programs are therapeutic. Her approach is taken from different methods but it’s her own personal approach, which is very play-based, interactive, and participant centered.

On the dance side, I utilize some of my DanceAbility training, but I also draw a lot on my basic studio background as well. We have a variety of adult classes in techniques like hip hop and tap, where I shift the class structure rather than the content.

When we’re building shows, I draw heavily on my training in Applied Theater, DanceAbility and contact improvisation. Interestingly, our last few shows have had a lot of jazz dance as well.

I noticed on Embrace’s website that classes in both adapted dance and mixed abilities dance are offered. What is the difference?

Those are loose terms, but we found it was helpful for people in the community to differentiate between the kinds of classes we offer. Adapted dance classes are rooted in specific styles, like tap, jazz, hip hop, ballet and musical theater. We adapt the shapes and the ways we go about teaching, but they are recognizable styles. Mixed ability classes are more improvisational and aren’t rooted in a certain style. It’s a mix of contemporary, contact improv, and forms of exploration from other styles.

What kinds of people within the disability community does Embrace mostly service?

It depends on the program, but we have four to 74-year-olds, and it’s pretty evenly split between children, youth, and adults. I also have a BA of elementary education and worked for a while in the schools, so the kids I was working with who weren’t finding accessible programs they wanted to be in came to Embrace. 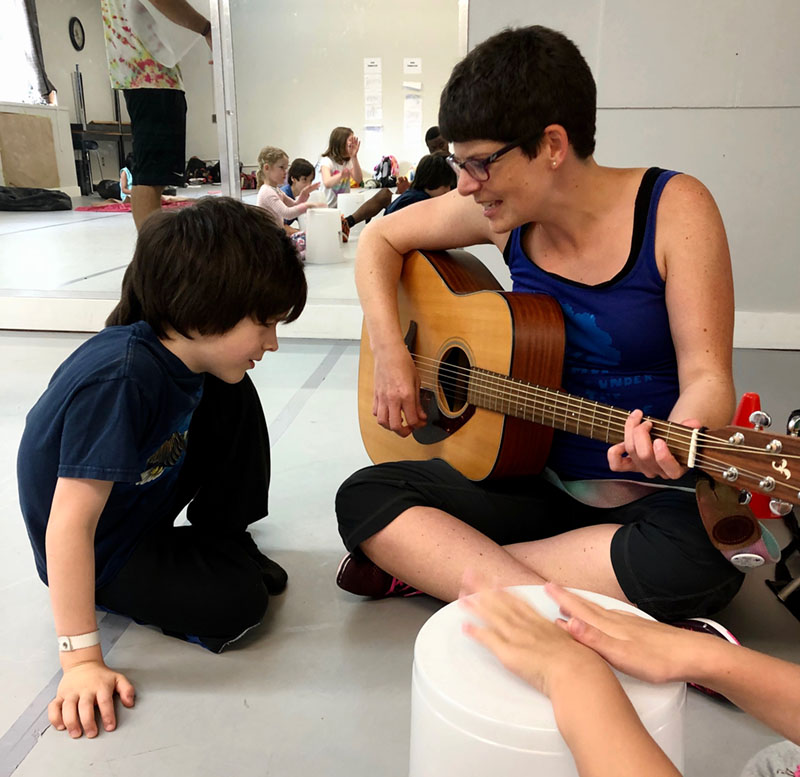 Pictured: Erin Koop and a camper, Photo by Tiffany Tjosvold

How have you seen Embrace impact or inform the greater Victoria community?

I’ve noticed in the past year a lot more engagement within the community. I used to get a lot of comments like, “what nice work you’re doing” whereas now, when I talk about Embrace, people want to find out what shows we’re making and how they can participate in different programs.

Alternately, how have you seen Embrace impact or crossover into the dance community?

Similarly, within the past year, there’s been more interest and openness. Embrace has been collaborating with other artists from the region’s small mixed ability dance community to create events that specifically invite the broader dance community to come and engage with our work.

While there’s more willingness to see and hear about what we’re doing, there’s still not much interest in having it become part of their own spaces. They have the attitude of “it’s already covered.” However, Victoria’s theater community has seen a huge increase in the desire to have people with disabilities be involved as full participants. This past year, Embrace was involved with a residency as a part of Impulse Theatre’s Peek Fest, which also hosted workshops. Impulse generously supported a group of additional artists from Embrace to attend these workshops. So there’s a big shift, but more within theater than dance in Victoria.

What’s next for Embrace?

We have several artist-designed projects led by those within Embrace Performance who have been in performing roles in the past and are now coming into choreographing and directing.

We have our toes in a lot of different areas, and perhaps for someone looking at the website it might feel like we have spread our net too far. However, it is important to me that there is access at every stage, which is why we have everything from kids camps for five-year-olds to a performance company. 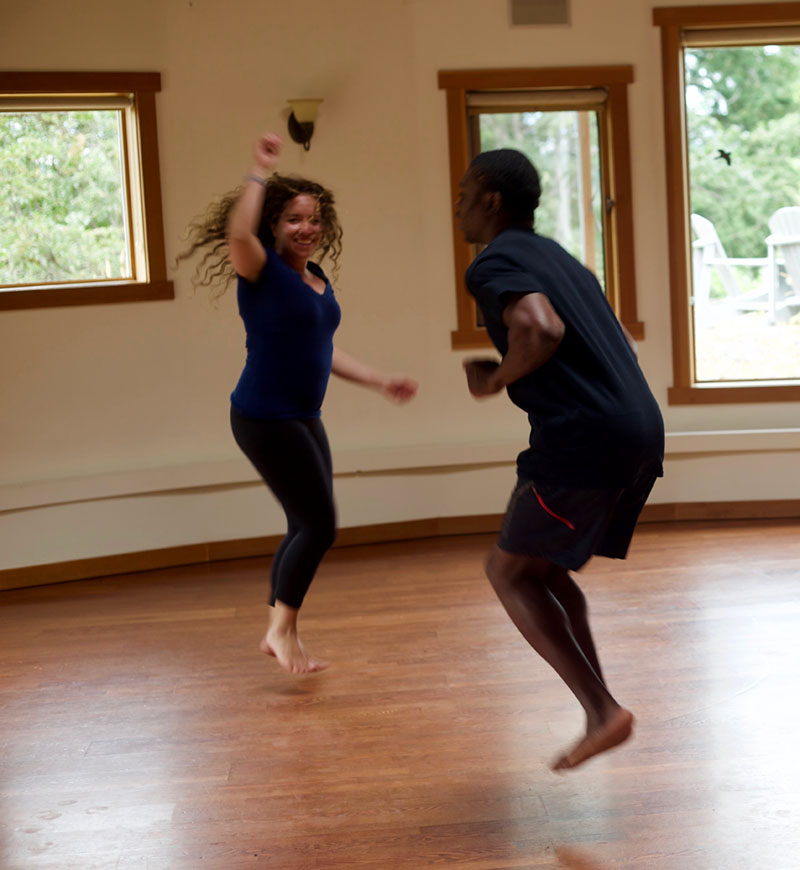