An Interview with mersiha messiha

mersiha messiha is a Bosnian/Swedish/American choreographer/performance artist and the artistic director of Mostar (Bosnia and Herzegovina)/Brooklyn based CIRCUITDEBRIS – a platform for performance and interdisciplinary practice. Her work draws on elements of dance, sound, theater, drawing, writing, and ethnography to address larger social issues in the globalized world. Here, she discusses her choreographic process, her movement practice M-BODYMENT, and the role imagination plays in both. 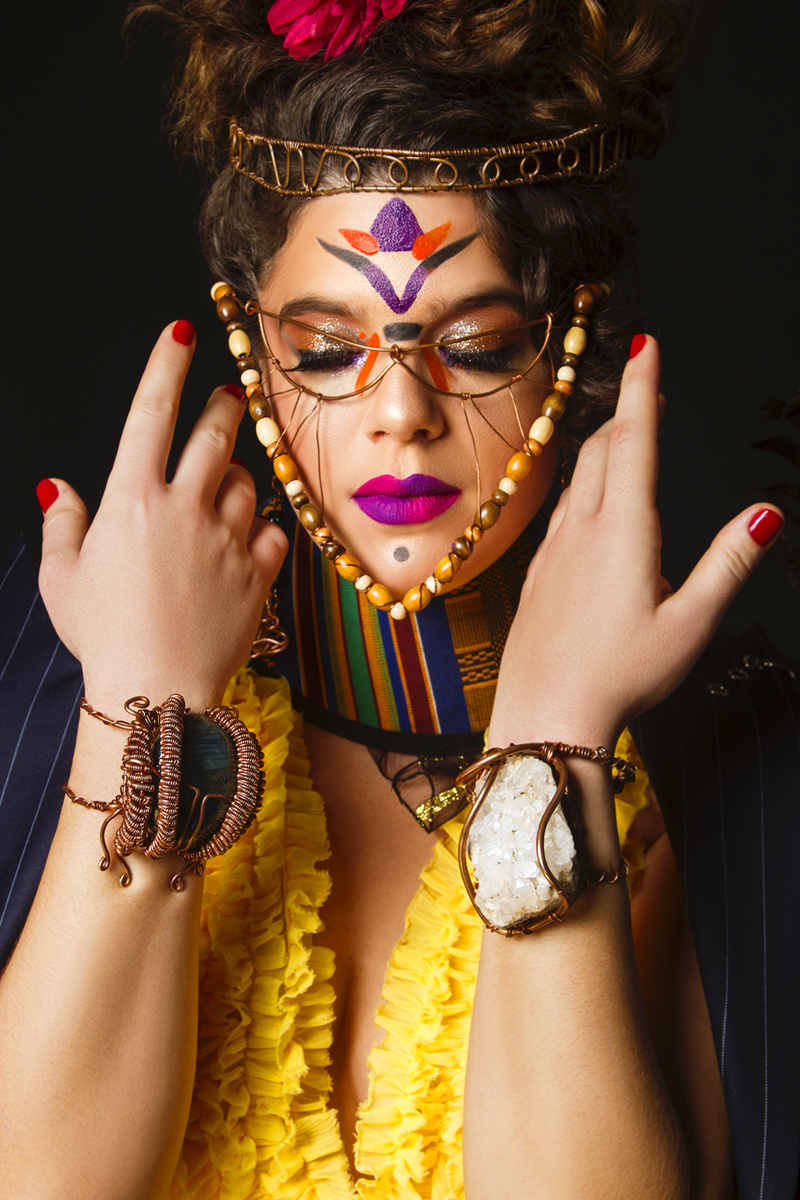 I started dancing in the clubs and the streets with my friends growing up as a refugee kid in Sweden. I did my first preprofessional training program at Balletakademien in Stockholm, Sweden, and then earned a BFA in Dance at California Institute of the Arts in Los Angeles, CA (CalArts). During these years I had the opportunity to dance in works by choreographers such as Trisha Brown, Ohad Naharin and Colin Connor. I thrived by pushing the limits of my physicality in imaginative ways. But what truly shaped my practice was having the opportunity to study with profound thinkers at CalArts: Chandra Khan (whose work includes questions of heritage and the pathways of contemporary social and spatial development) and Billy Woodberry (in whose film class I was introduced to Frantz Fanon). These two professors were influential in developing how I approach my work. Fanon’s Black Skin, White Masks was a beginning to a trajectory of unpacking personal history and thinking through the conflict back home in Bosnia and Herzegovina in a more global context.

At CalArts, I also met my longtime collaborator and partner composer/saxophonist James Brandon Lewis, who introduced me to the jazz music tradition, improvisation, and his practice of developing systems for improvised music. James encouraged me to keep developing my unique approach to the moving body and fed my confidence when, at times, my work seemed too experimental or political in the dance department.

I deepened my practice further in 2017 while pursuing an MA in Performance Studies at Tisch School of the Arts at NYU. Studying with performance scholars such as Diana Taylor, Deborah Kapchan and Fred Moten encouraged me to see my practice as a poetic space that is constant. It is continuously spatializing and available to me through how I approach my body, my thoughts, being with people, how I talk and listen, participate, take space, and make space. I am aware that I am always generating knowledge. Simply by being and through our day-to-day actions, we participate in the production of culture and identity. The idea that we together make a system rather than it being a thing outside of us is always present, be it in a creative process or over a cup of coffee. 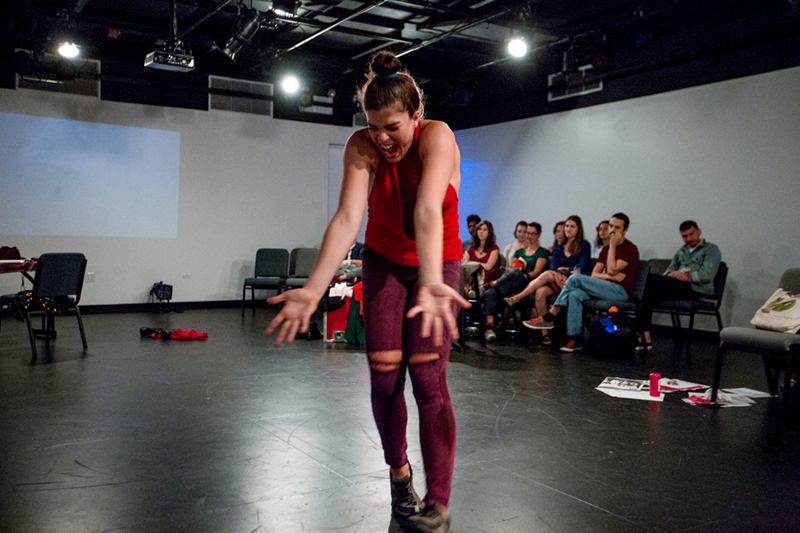 I think of my choreography as creating worlds. My works are cosmologies. They are networks; webbings of information, research and process, investigation, action and media; an entanglement of knowledge continuously becoming.

What is M-BODYMENT? How did you create it?

I am curious about the pathways, spaces in-between, and spaces becoming rather than the “thing that is.” If I am, for example, doing a tendu, I think of it as a connection both within the space of what we refer to as the human body and an extension of that space out in multifold directions. This occurs in a series of processes that I map though language and imagination, sometimes or often without necessarily moving. If I am mapping a tendu, I would contemplate what my left sitting bone is doing in relation to my left foot while it is stretching in forward motion, and how these two spaces are connecting. Is the scapula moving back into space while I am “accomplishing” the task? How is the energy moving through the leg and connecting across my back to my scapula? How are my neck and scull reacting to that? And how is all of that now affecting my relationship to the space surrounding me, including the floor and other dancers?

Now the fun part! Being aware of all these pathways that are happening simultaneously, I am curious about the possibilities: What can I do with this information? Just by a “simple” forward motion of my foot into the space out from my center line, I have multiple possibilities. This offers me a way of being in the room together with movers across ability and prior experience. There is no “right way to move,” beautiful or ugly. The binaries are shattered, and hierarchies are flattened. Everything that is put into the room matters, and everyone is an asset to the research. M-BODYMENT is really just a space driven by curiosity, imagination, and being together.

However, I do have an academic approach and can get incredibly systematic with how I approach “the body.” I keep “the body” in quotation marks because, for me, the body is always relational: a transversal space, transgressing the in-person property principle. Even when the body as we know it is “eliminated,” its interdependencies remain. I am interested in examining the body with its interrelationships and the idea of the body as more expansive, rather then what society has agreed is a singular human body. I call it a post body praxis. 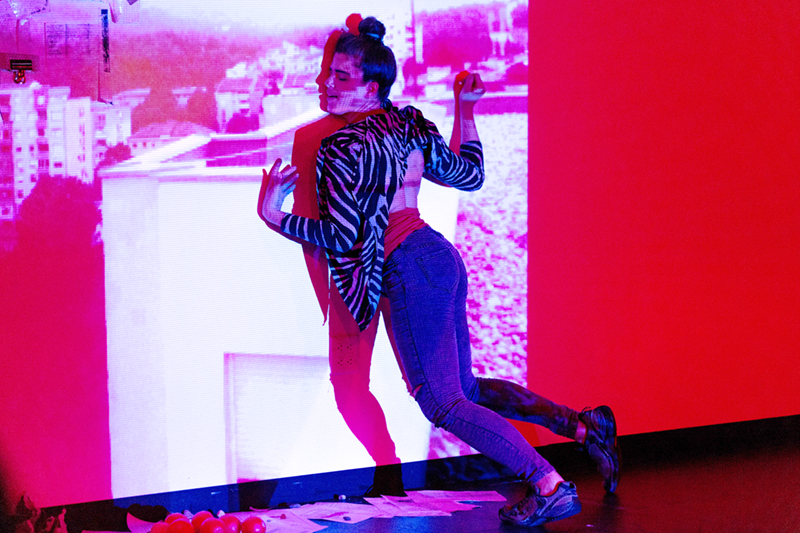 What does your choreographic process generally look like? How does your development of M-BODYMENT inform your process?

I am interested in cosmologies of the non-western world and nonlinear space-time. My choreographic works are formatted as energetic flows. I say that because I am very aware of what is going on energetically in the exchange between me, the collaborators, and the audience. No performance is ever the same. They are open scores/systems transmitted via patterns of “bodied” reality, sound and image, multiplied, interwoven, fragmented, and layered, actively influenced by the presence of the viewer. I work collaboratively and prefer having as many minds as possible involved in the creative process. I guide and direct the decision-making but I’m extremely sensitive to the knowledge present in the room, so I listen and prefer my collaborators take ownership and make decisions, which is the most satisfying part. We are creating, living, breathing, making worlds together! These past couple years have been all about saying yes to everything and making it work, which also is related to the concept of working with and transgressing the limitations of time, space and funding. I believe in the idea that everything matters and no material can really be thrown away, but rather is part of the whole, which is continuously creating, shaping and commenting on itself.

Both SEVDAH body and SHE IS A REFUGEE STAR are current and I see them as sister works, as one is developed through the other. SHE IS A REFUGEE STAR invites the reality of what it means to be a refugee, immigrant and Muslim in Europe, away from the tropes and representation we usually receive these lives in. I am transparent in the work and share much of my personal story within the broader historical and present context. From the initial investigation of the interrelation of nationalism, patriarchy and racism which are holding up the global system of anti-Blackness, SEVDAH body is born.

SEVDAH body is my homage to the Indigenous land and a future homeland free of institutional demands in the spirit of the Bosnian poet Mak Dizdar, who finds belonging in the land infused with Indigenous symbols of renewal, continuity and transitivity rather than in nationalist glory. I think through the ethnographic landscape of Bosnia and Herzegovina, moving away from Western conceptualizations of bodied reality, and offering a new way to think through questions of ethnicity and race. The work challenges the notion of citizenship and encourages a borderless society. This work asks me to contemplate further on transitivity in terms of gender. Questions of moving beyond a binary gender paradigm are present and very visible in my work. 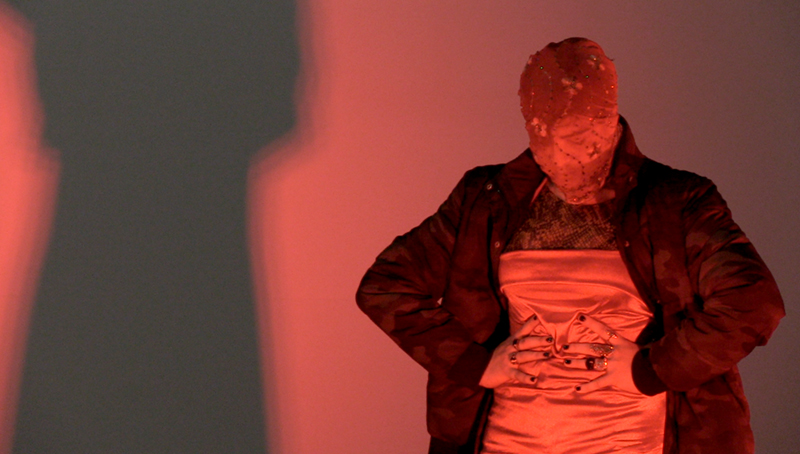 Are there other themes or issues that feel important to you to keep tackling or addressing in your work?

I continuously address corporeality and what we perceive as a body, especially what we deem as able, valid and a desired body, moving toward a more equitable field of dance and society at large. I often say I want us to move beyond the idea of a more inclusive dance field or a more inclusive society. It is not about inclusion for me, but about re-thinking what a body is and expanding the field to work toward a society in which we are reimagining the idea of the body. I want to rearticulate our value system shaping what we imagine and deem as a proper body.

I also have the desire to interrupt flows of power and transgress controlled subjectivities through the potential and means of radical imagination. I am consumed by the process of cognition and individuation, the fact that cognition and reality are enacted together, and the possibility to enact a different kind of reality beyond heteropatriarchy and nationalist ideology. What drives me always is my need to transgress the limitations placed on my individual and shared identity and on what I/we can imagine is possible.

I am looking forward to presenting both SEVDAH body and SHE IS A REFUGEE STAR globally. These works require physical and emotional extremes from me. They keep me humbled, grounded, and connected to spatializing a gentler futurity. 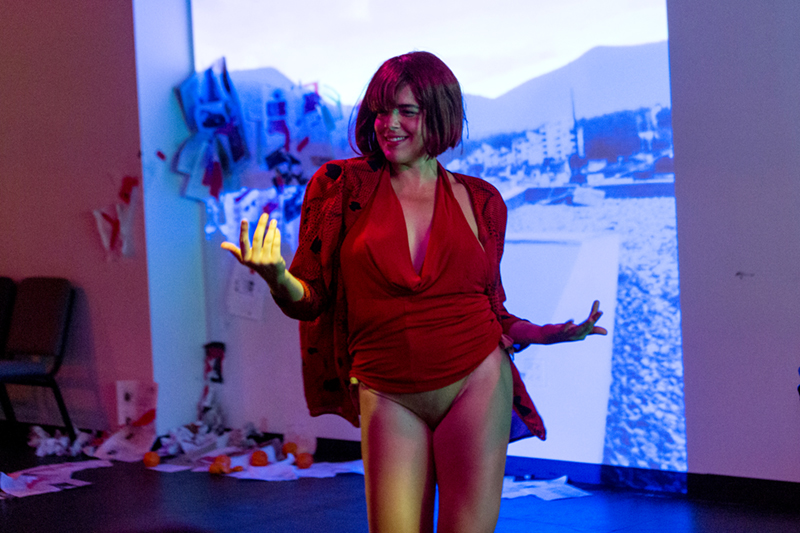 One Response to “Reimagining the Idea of the Body”