The Post Natyam Collective is a transnational, web-based coalition comprised of Sandra Chatterjee (Munich/Salzburg/India), Cynthia Ling Lee (Santa Cruz), and Shyamala Moorty (Los Angeles) who are committed to exploring feminist-of-color, queer, and post-colonial issues through the body by creating interdisciplinary dance and media. The Post Natyam Collective members are steeped in South Asian and other movement forms, and work with multimedia, theater, art installations, creative writing, music, and scholarship. Here, they share more about how their long-distance process works, as well as some of the motifs and queries within their work.

Shyamala: In 2000, Sandra Chatterjee and I found each other as rare kindred spirits in graduate school at UCLA’s World Arts and Cultures Department. We are both part South Asian and together started to explore our hybrid heritages and multiple dance legacies through theoretical explorations in choreography and writing. Anjali Tata overlapped with us and we discovered that we were able to offer each other support in a primarily western post-modern environment, for we each had an aesthetic base in South Asian dance forms that our choreography mentors didn’t know how to read/interpret, and we each had a strong desire to push the edges of the traditional South Asian forms to further express the complex post-colonial experiences both within and around us. When we graduated, we decided to continue working together as the Post Natyam Collective and had our first performance in Munich in 2004. Through the years, we have included various choreographer/scholars, including Sangita Shresthova and Meena Murugesan. Our current membership still consists of Sandra and me, along with Cynthia Ling Lee. In October we are celebrating 15 years of the Post Natyam Collective! 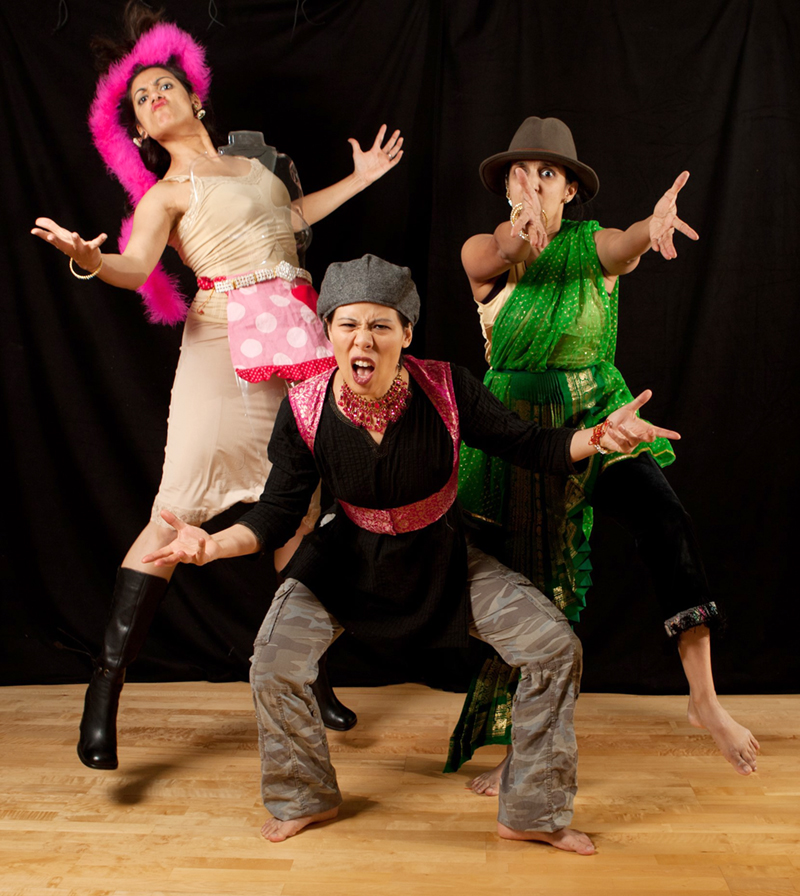 How would you describe the work of the Post Natyam Collective to someone unfamiliar with it?

Sandra: It is difficult to describe Post Natyam‘s work in a summarized way, as multiplicity and multivocality are some of our commitments. As such, the range of outcomes of our creative processes varies a lot in styles, formats and media. It ranges from dance performances to installations, writings (scholarly and creative), dance-for-camera work, and workshops. Constants of our practice are a critical engagement with South Asian movement forms and aesthetic principles, in addition to a wide range of movement forms we each are trained in, cross-diasporic and trans-local sharing, a unique intersection of scholarly and artistic explorations of specific themes, and transnational, process-oriented working through long-term engagement with select topics, ranging from cabaret to the process of queering to borders that resurface. Importantly, there are two pillars of our collaboration: our long-term, deeply committed and intimate artistic relationship with each other, and our tightly structured online artistic process via a blog, which serves as our ‘online studio’ and is publicly accessible.

What does your work process generally look like, especially since you live in different places?

Cynthia: Starting in 2008, we began experimenting with a long-distance collaborative process utilizing free and inexpensive web-based tools such as blogging and video posting. The basic structure for our creative process is as follows: each month, one of us gives a creative assignment. We have a couple of weeks to each complete a study in response to the prompt and upload it, along with feedback questions, to our online studio/shared blog (postnatyam.blogspot.com). After that, we have a week to give each other feedback in the form of blog comments. We then start the process again, rotating who gives the assignment. This process results in the generation of a large amount of raw material, ranging from movement phrases to creative writing to sound scores to dance-for-camera studies. Some of this material ends up being developed into more finished products either individually or collectively, and importantly, within the collective, we have an open source policy in which we encourage each other to borrow, steal, translate, and appropriate each other’s material. Over the years, we have found it useful to ground our shared explorations thematically, so that one process might focus on performing queerness and gender nonconformity within South Asian dance, as in the Subversive Gestures Feedback Loop (2012-17), and another process might focus on borders, migration, and citizenship, as in Borders Resurfacing (2016-17). We see our differences – aesthetically, politically, geographically, and in terms of identity – as a source of strength. We strive to center democratic dialogue, loving criticality, and solidarity in our processes, and value multivocality in the work that we produce together. 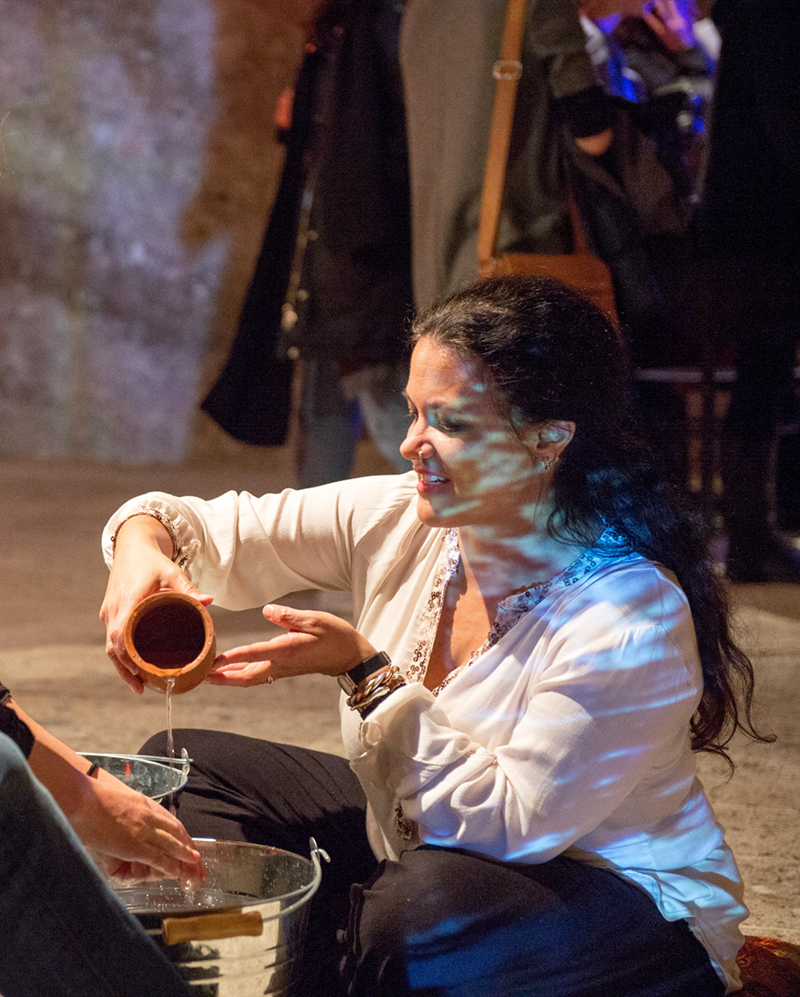 Sandra Chatterjee in the Post Natyam Collective’s performance installation Back to the Beautiful – Saalach (2017).  Photo by Hubert Auer.

Are there certain themes or issues the Post Natyam Collective finds important to keep tackling or addressing?

Can you go into specifics about one or two of your favorite projects?

Sandra: This is a difficult question to answer and very subjective, as my perspective as the collective member who is furthest away from the others might not be representative for the collective as a whole, and as they focus on the projects that I was most directly able to be engaged with. As my favorites, I would name two of our long-distance processes, which did not result directly in collective projects or performances, and one project.

First process: Cabaret Travels, which involved transnational research in collaboration with Delhi-based guest director Aditee Biswas and resulted in an extensive website designed by Ulka Mohanty (unfortunately this website got hacked and could not be fully reconstructed yet).

Second process: Queering Abhinaya (2014-2015), in which we explored the potentials and possibilities of queering as an artistic strategy in relation to South Asian performance modes and beyond. Though we did this process several years ago, we have recently picked up on one study about Maud Allan that came out of this process and years later are creating a piece titled the sins of such wonderful flesh. 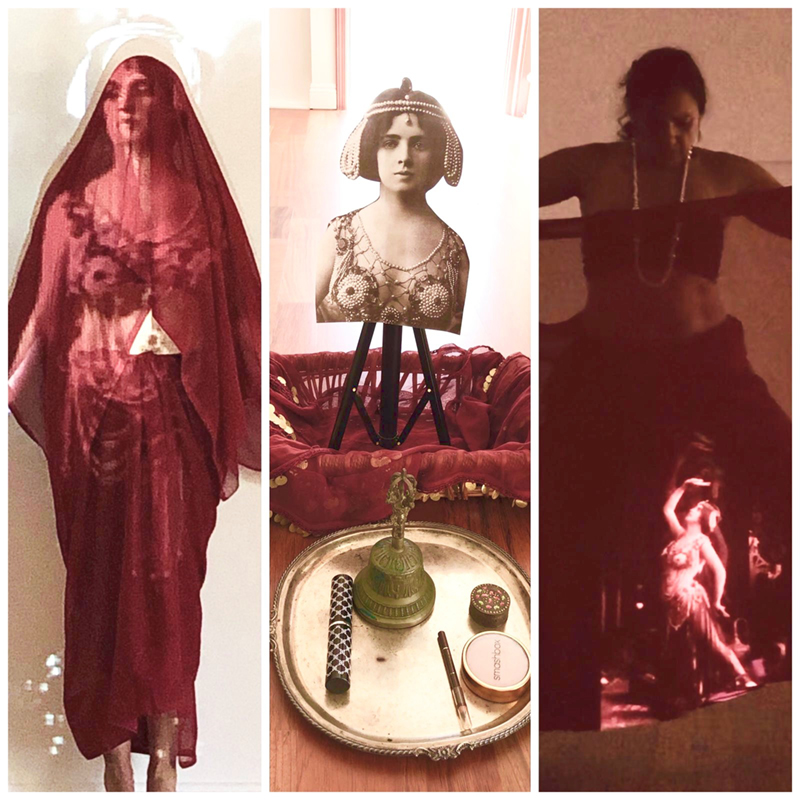 Shyamala Moorty dancing with the image of Maud Allan in the sins of such wonderful flesh (2019).  Photos and video stills by Cynthia Ling Lee.

Cynthia: We were one of the first dance collectives to collaborate extensively using the internet. By now, long-distance collaboration aided by technology has become much more commonplace, and a panoply of tools, strategies, and best practices have been developed by performance-based artists, many of them digital natives. What sets our work apart from other forms of technological collaboration is a grassroots approach where technology is not valued for its slickness but for its ability to bridge isolation and center marginalized voices and aesthetics. In our case, we were initially drawn to work together because of our shared interest in working critically and creatively with South Asian performance aesthetics, an interest that was not actively supported within our local dance communities at the time. We collaborated long-distance because, frankly, we did not have the funding or resources to come together in person for extended periods of time. While the shape of the collective has morphed over the years as our lives and interests shift, what holds us together is a long shared history, deep trust, lasting friendship, and an enduring commitment to each other and our collective dialogue. For artists considering long-distance collaboration, the first question I would ask is: why do you want to collaborate long-distance? Once you know your shared values, you can develop a collaborative process grounded in those values, strong enough to survive the frustrations of spotty internet, bad reception, and scheduling across time zones. 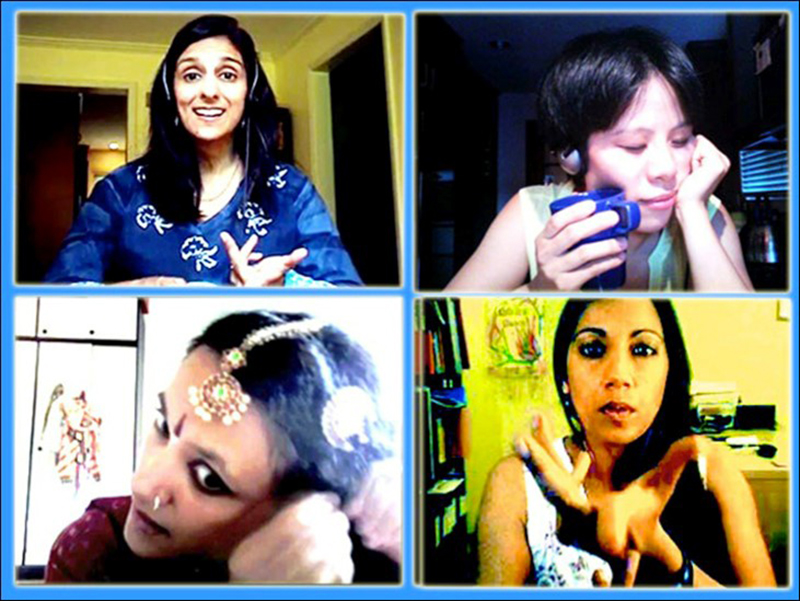 What is the Post Natyam Collective’s next project or focus?

Shyamala: We are currently working on a subversive queering of the figure of the Orientalist dancer Maud Allan through performance and writing. Through this process we are investigating queering the hetero-normative gaze and Allan’s troubled legacy.

The first iteration of the performance, the sins of such wonderful flesh, was performed at the EXPLODE! Festival of Queer Dance, curated by Clare Croft at the Culver Center for the Arts in Riverside, CA on May 31-June 1, 2019. To see images of the work-in-progress, follow our spring/summer 2019 newsletter.