Evan Ruggiero is a singer, actor, one-legged tap dancer, and motivational speaker based in New York City. He began his professional tap career at the age of 10 with the New Jersey Tap Ensemble. He earned a BFA in Musical Theatre from Montclair State University. During college, he was diagnosed with osteosarcoma and had to amputate his leg to save his life in addition to undergoing multiple surgeries. Eighteen months after the amputation, and only two days after receiving his peg-leg, Evan was tapping again, this time in the vein of Clayton “Peg Leg” Bates. 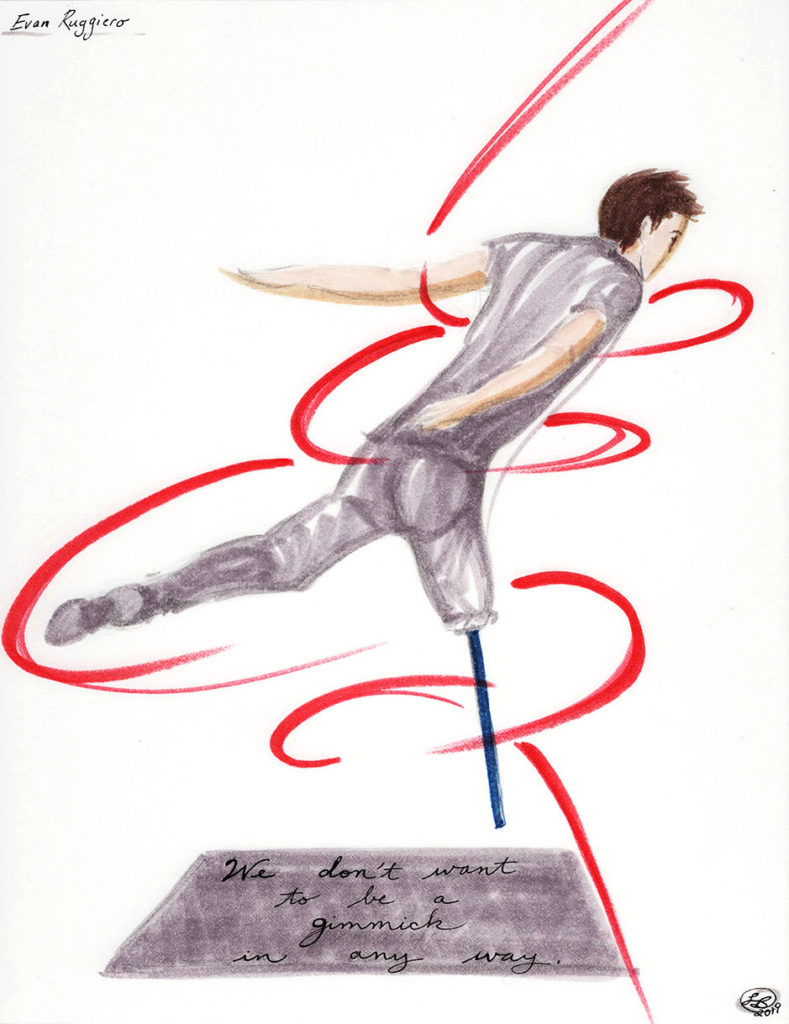 Image description: Evan is depicted suspended in air with his peg-leg pointing down, his back to the audience, and his leg and arms extended out behind him. Red streaks of energy swirl around him. He hovers above a gray mat with the quote, “We don’t want to be a gimmick in any way.”

I started dancing when I was five years old. I saw my sister in a dance class and thought it looked like fun. I started out in hip hop, which I really enjoyed, and from there started to take tap dance. By the age of 10, I had auditioned for a professional tap company, the New Jersey Tap Ensemble. I got in, and one of my first performances was at Lincoln Center. Some highlights throughout my career have included not only performing at Lincoln Center, but also at Carnegie Hall, on the Ellen DeGeneres Show, performing for Joe Biden, performing for President el-Sisi of Egypt, having my own show at the Kennedy Center, being a Drama Desk nominee in 2018… so many great moments.

When I was 19, I was diagnosed with osteosarcoma, a type of bone cancer. I had to leave school; I was studying musical theatre at Montclair State University. I started to undergo many treatments and surgeries. I always wanted to perform again and specifically to tap dance, but my cancer came back after seven months of surgeries and the only thing left to do was to amputate my right leg above the knee. I had heard of Peg Leg Bates, who was a tap dancer back in the day who lost his leg in a cotton gin accident when he was 12. He taught himself how to tap dance using a peg leg. I thought: If he could do it, so can I.

After the amputation, I went through 16 months of chemotherapy. Finally, after a total of two years’ worth of treatments, I had a peg leg made for me, and I began teaching myself how to tap dance again and get comfortable with this new extension of my body. From there, I started to perform again and travel the world not only doing tap dance but also singing, acting, and motivational speaking. I created something new for myself.

I do a lot of rehearsing with my band, Evan and the S’Evan Legs – there are four of us, but only seven legs between us. As a tap dancer, I am also a musician, as many tap dancers will describe themselves. We rehearse maybe once a week together for four to eight hours. We are frequently booked for shows, so the amount of rehearsing we do is sometimes limited in comparison to the amount of performing we do. Depending on what show is coming up next, we’ll get back into the studio to rehearse for it. New choreographic ideas are always being talked about and, when we have down time, we get into the studio to develop those ideas. From there, it’s adding layers and building upon the foundation.

Depending on which leg I’m wearing when I tell someone I’m a dancer, I might get a confused look. If it’s obvious I’m wearing a prosthetic and you can see the robotics of my leg, some people will say, “What? You dance?” And when I say I’m a tap dancer, they are even more confused. I then explain to them that I tap dance with a peg leg. Then they might say, “Oh wow, crazy!” If I’m hiding my prosthetic under my pants leg, no one questions if I’m a dancer because they assume I have two legs. And then the real surprise is when I change into my peg leg and tap dance.

I still get the same looks and questions in a dance class. If I’m brought into a studio to teach, and it’s advertised I have one leg, and my bio and photos are all available, the students might know what they are getting into. There’s still the same reaction of: “What happened to you?” I’ve created a new tap class for students who have two legs which replicates the sounds of what I’m doing with my peg leg. Students in my classes use their right heel to experience only having one way to make a sound out of their right foot.

It happens all the time that I put my blood, sweat, and tears into a show and work on it for months, and the one thing that comes through in the press is something like: We commend him for what he’s been through, and good for him. I don’t want anyone to feel sorry for me. I’m just trying to present my work.

I get the inspirational thing daily. I’m flattered and am always grateful and appreciative to everyone who has reached out to me. At the end of the day though, I’m just another hustling artist trying to make a living and have a career. The odds are very much against all of us in this industry. On top of that, having one leg, I have to work three or four times as hard as someone with two legs. I don’t look at my career as trying to be an inspiration to someone else. I have to get out there and just work harder.

I try not to see myself as disabled. I try to just keep going forward with where I left off when I had two legs. Every year, something on my list of goals gets checked off. There is a lot of negativity in the industry overall, but I think artists with disabilities are really starting to come out, make names for themselves, present their work, and say, “We are not ashamed of who we are.” So I think the industry is starting to move in the right direction. Some disabled artists are even starting to get national recognition.

There are companies like AXIS Dance Company and some others in New York that I’ve worked with that are dedicated to educating dancers with disabilities. In the more commercial world, I haven’t seen those educational opportunities. I’ve reached out to a couple other amputees who are interested in learning tap dancing, but there’s no institutional training opportunities at the moment. It’s individuals coming together to educate each other, and then maybe a company gets behind it.

I was in college when I had my leg amputated. I was a musical theatre major, so I was able to focus on singing and acting after my surgeries. By the time I had lost my leg, my university was willing to work with me so that I had the right credits for my dance classes. As a freshman, I had taken four days of ballet, two days of jazz, and two days of tap, so I had fulfilled most of my dancing requirements. As I taught myself how to dance with a peg leg, I took double tap classes to make up the final credits. My amputation didn’t put much of a hold on my college academics, but it’s interesting to speculate if my experience would have been different if I’d had my amputation before college.

I taught myself how to dance with a peg leg by studying the footage of Peg Leg Bates. Knowing it could be done, I tried to recreate what he did and then make it my own. Tap dancers think of themselves as musicians, so I tried to think of it as creating new music with this extension of my body. I used the peg leg as the bass drum, and I used my left foot as the snare and tom-tom drum. Through the sounds I was able to create, I came up with a new technique for myself.

I think that dancers with disabilities should very much be integrated into the mainstream, as I have been trying to do for the past eight years. I have been a little successful with it. The best way to go about getting disability accepted in dance is to integrate it into the commercial world. It’s on its way, but it’s going to continue to be a struggle finding producers interested in working with dancers with disabilities and seeing us as commercially profitable.

Sometimes the press will call me “differently abled.” The correct way to say it is to call it a disability. I call myself a one-legged tap dancer or a one-legged song-and-dance man. I prefer “dancer/actor/performer with a disability” or “dancer with one leg.”

I believe it is. We’re seeing more commercial work featuring dancers with disabilities. It is still about having that discussion with casting directors and other producers who are willing to take a dive into this work. We don’t want to be a gimmick in any way. We are hardworking performers and casting us can be profitable. 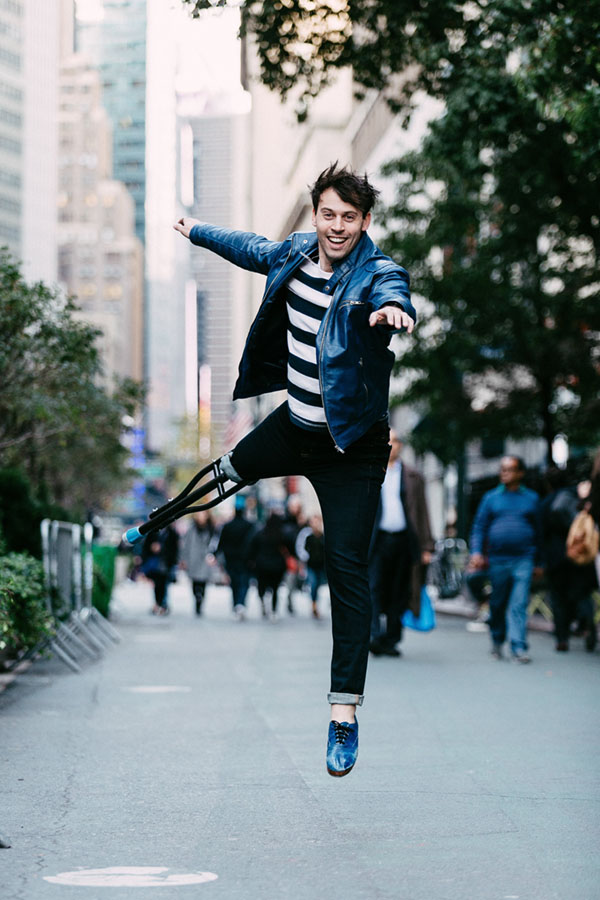 Image description: Evan is dancing on a busy street in NYC with trees, buildings and pedestrians in the background. He leaps toward the camera, his arm and face outstretched front, his peg-leg outstretched behind him, and his other leg reaching to the ground.