An Interview with Layna Lewis and Kayla Banks

Viva La Free is a nonprofit in Portland, Oregon that creates art healing projects and public art to energize, enchant and heal communities, centering vulnerable and marginalized populations most impacted by systems of oppression and dominance. For the past three years, Viva La Free has been producing Black History Remix, an Afrofuturist multimedia performance. Earth Dance is the first piece of their 2019-20 season and combines dance, sound and immersive tech to explore the human timeline of history; past, present and future. Director and producer Layna Lewis and assistant director and dancer Kayla Banks share the history of Viva La Free and the context for Earth Dance, as well as why Afrofuturism is a powerful tool for activating communities to transform policy, practices, curriculum and culture. 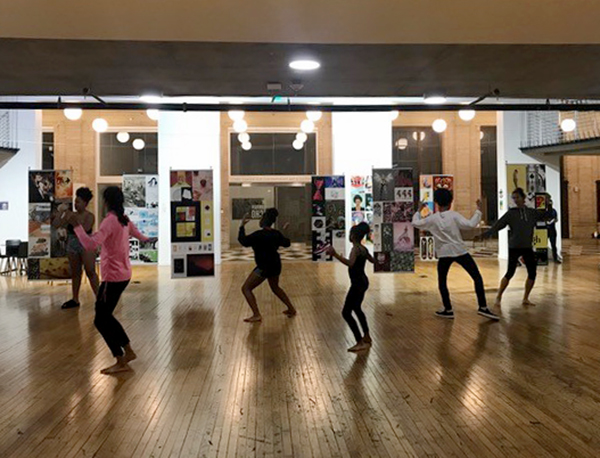 Can you tell me a little about your dance history and what kinds of performance practices have shaped who you are today?

Layna: I was one of those kids who always danced. I was extremely dramatic, expressive and embodied. It’s the way I move through the world and communicate. I started taking dance class very young. Later, I was on dance team and was a cheerleader. I was the kid who would assign everyone in the neighborhood a role and create a show. I would also propose and perform shows at school. That facilitating, directing and producing element was always there, as well as choreographing, dancing and performing.

Life happened and I got distracted, but I was always immersed in the arts in one form or another. Fast forward to six years ago, I decided to go full time into the arts and create the arts organization Viva La Free.

Kayla: I started dancing when I was young. I danced at a competition studio but most of my experience came from high school, which offered dance and musical theater. Then I went to college and studied performing arts, dance and theater. I trained in ballet and modern with some experience in African dance. I was able to go to various summer intensives to give me a really rounded training. Dance is what I’ve chosen to study, pursue, teach and create.

Can you share a little history of Viva La Free and Black History Remix and how they came about?

Layna: I was born and raised in Portland, so I was shocked and horrified to learn that Portland was ranked number two in child sex trafficking in the United States. This was 2012. I was perplexed that I did not know this, and I believed that if others knew, we would be able to do something to help. I called practically everyone I knew and said, “We have to do something about this. I don’t know how, but somehow art can help.” Out of everyone I called, a group of five of us started meeting every week and we became a de facto focus group. We started researching trafficking locally, nationally and globally. We interviewed survivors, direct service providers, attorneys, law enforcement and the department of child services.

There was one safehouse at the time with seven beds dedicated to child sex trafficking survivors. I went to the director and proposed a weekly art group with the youth. They said yes, and for three and a half years I taught a weekly art class pro bono and funded supplies locally. That’s how Viva La Free started. There’s little research on this specific trauma, but what research there is indicates that when someone is so severely traumatized, they often don’t respond to formal therapies. They do, however, respond to expressive arts therapies. Movement, pattern and embodied sensory practices work to get them into their bodies, because they are often so disassociated.

We painted on large surfaces. I encouraged the children to do repetitive movement with the brush strokes, using their whole body. Movement and repetition, as well as using fields of color and incorporating music, were used based on evidence-based research and were very successful. The staff reported that the youth were much calmer after these sessions and it changed the group dynamic. Art gives people autonomy in that they are able to self-determine their own process of healing. And these kids just needed to have fun, simply throwing paint around, creating a mural, taking off-site photography hikes, and building sand sculptures on the beach, some for the first time ever.

Recently, the house closed. Viva La Free went on to make a film, curate art action pop ups, paint murals, and create and produce an original theatrical performance, Black History Remix. One of the first visions of Viva La Free was our artist apprentice program. Viva La Free’s innovative model provides access, inclusion and opportunities for artists that encourage them to pursue creative vocations. Often our most marginalized, underserved communities are discouraged from pursuing the arts, and rarely have the privilege of an arts education. I take the apprentices through every aspect of production, pre and post, including visioning, research, acquisition, grants, fundraising, marketing, office politics, building and maintaining industry, business, and client relationships, as well as developing their artistry and craft.

Black History Remix was originally a project at Irvington Elementary School, where both of my daughters went. The school did programming around Black History Month, and it was usually a play. I knew that one of these years I would direct the play, but I kept that a secret, even from myself. Several years later the opportunity arose and I took it. In 2016, one of the PTA members, a friend of mine, said there would be no play that year. I surprised myself by proclaiming I’d do it. She told me I needed to present a proposal the next week, so I created a student driven curriculum, timeline, budget and summary. After a lot of resistance to that idea, it was finally approved.

Black History Remix is an innovative student-centered model comprised of six weeks of workshops to explore history and themes of Afrofuturism with improv, theater games, writing prompts, and guest artists, all to encourage uninhibited play and creativity. We devised a plot and I wrote a script. We then spent six weeks in production, culminating in one performance, the first Black History Remix.

Black History Remix is a three-act original play using the genre of Afrofuturism to reimagine past, present and future. I structured Black History Remix to be evolutionary and sustainable, to grow to encompass more students, artists and art forms. Last year, we expanded into other schools and communities, added scenes, included immersive tech, and partnered with other organizations.

Kayla: I just moved to Portland from Colorado after establishing my LLC, Banks Movement. I’ve been exploring different work options and, in the process, met Layna. Our relationship started with me working with her daughter. The opportunity came up to work with Viva La Free and, as my schedule cleared, I was able to give more of my time and attention. The opportunity Layna has given me is amazing because I love dance but am interested in gaining director, producer and admin experience. Coming on late January, I knew Layna wanted Black History Remix to incorporate more movement expression. I jumped on board. 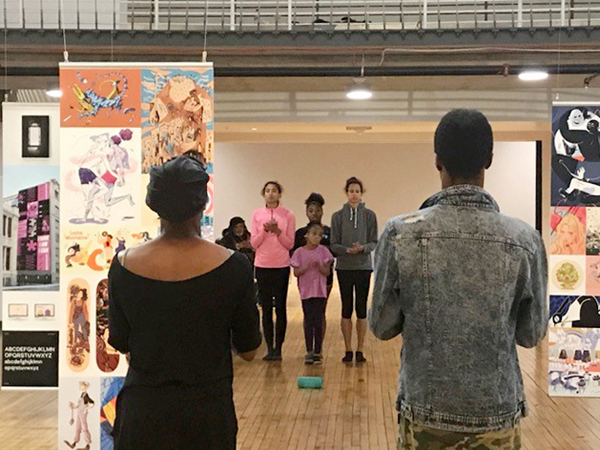 Can you share more about what Earth Dance is?

Layna: This year, I structured Black History Remix to be completely nonverbal. It is vastly different than previous years. We are exploring subtexts and overarching themes of the original script through movement, sound and tech. We’re no longer at Irvington Elementary School either. I wanted to expand into dance and sound because words often fall short. It’s important to clarify that our programming goes from March 2019 to March 2020. We’re purposely expanding and exploding the idea of Black History Month beyond February.

Earth Dance is a full-length piece exploring Afrofuturism through movement, specifically as a human timeline. The show starts with projections on a 20 x 50 ft. wall. There’s also a projection on the floor. Lola Lewis appears as the divine feminine cosmic force, moving from cosmos to earth, Africa and the birth of humanity. The dance starts with the heartbeat and moves through body percussion, then into Pan African dance, the passage to the Americas, Ring Shout, Spirituals, Samba, Barrelhouse Blues, Civil Rights/dances of the 60’s, Hip Hop, House, and back to Pan African drums ending with the heartbeat.

Kayla: All of the dancers are Black/African-American identified. We worked closely with choreographer Mr. Bobby Fouther, a second-generation Portlander who has connections throughout the community. He brought in Rashad Pridgen, Kemba Shannon and three of the other dancers. It became a team effort. Rashad choreographed percussion, Ring Shout, House and some of the Pan African movement. Malik Delgado, who recently moved from NYC, choreographed the Hip Hop.

What do you believe audiences took away from Earth Dance?

Layna: April 26th was our first performance and will set us on a trajectory for the rest of the year. There was so much juice with this group coming together to make something in a short amount of time. One of the most amazing things from the experience was the vast knowledge of African ancestry, traditions and symbolism. It was like tasting water for the first time and not knowing I was dying of thirst. It was such a profound experience and I felt we were sharing something so precious. It was deeply meaningful to me. I was honestly brought to tears on more than one occasion just through holding the space together. We had a good turnout and it was breathtaking. The immersive tech brought it all together with the thrilling artistry of the performers.

Kayla: Though my background is in classical ballet and modern, my mission has been wanting to seek out and explore more dance forms that are not mainstream. In the piece, the duet I performed was a traditional Lamba ceremony that represented the passing of our ancestors and celebrating their passage, but also experiencing the trauma of African American ancestry and being enslaved and taken from your ancestors’ home. That duet was choreographed by Mr. Bobby who studied with Baba Chuck Davis and Katherine Dunham. That experience is precious to me.

What’s your next project or focus?

Kayla: I believe Earth Dance can be a staple piece. My marketing mind makes me think it could be brought to different spaces in Portland, especially educational and culturally representative spaces. This piece is something I think could be brought into schools to give students more perspective. We’re at a time in our society when there is more POC content coming out that tells history through the perspective of populations/communities/ethnic groups who are historically and currently erased and suppressed by dominant culture. This is important because the history taught in schools is centered through a white male lens. Earth Dance is relatable and offers an alternate lens of history’s timeline.

Layna: Earth Dance is an innovative archival history of humanity in general and of Black/African art forms in particular, which lend themselves to an embodied practice applicable to workshops, educational curriculum, and ritual. Earth Dance will function as a rubric of time-based performative work that activates space, creating a portal, beyond words, towards healing, towards liberation. 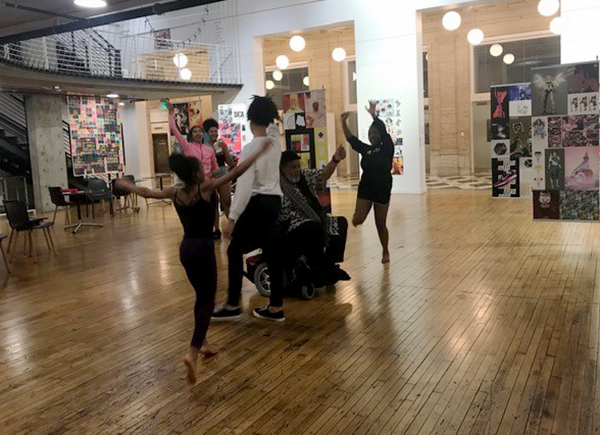