An Interview with Patrick Makuakāne

Patrick Makuakāne is the director of Nā Lei Hulu I Ka Wēkiu, a Bay Area-based dance company that blends traditional and contemporary forms of Hawaiian dance. He is presenting a new work that addresses climate change at Dance Mission Theater’s upcoming D.I.R.T. Festival 2019: storm SURGE on Saturday, March 9th. Here, he discusses why hula is an apropos form to address global warming, as well as added context for understanding hula in the present day. 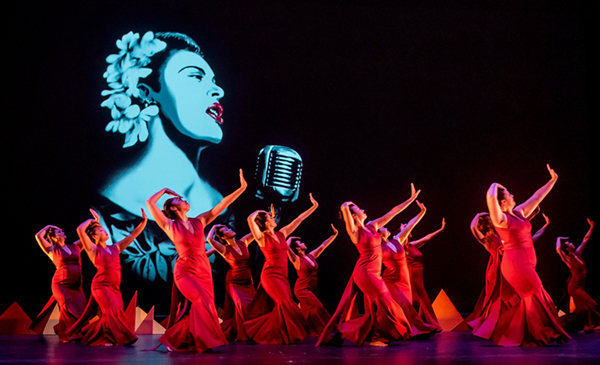 Can you share a bit about what you are choreographing for D.I.R.T. Festival 2019: storm SURGE, and why you got involved?

When I was first invited to participate in the festival, I thought, “Yes, this is an important issue, but do I have any pieces that actually address climate change head on?” Then it dawned on me: It’s very Hawaiian to address a subject indirectly. It’s always ensconced in metaphor, because in Hawai’i, it is believed that the message is more powerful if you must deduce it instead of it being spelled out. And what is used metaphorically in every Hawaiian chant, poem or song? Nature. Hawaiians are intimately tied to their natural environment. Every facet of life is discussed through the analogy of nature. Rarely do they talk about life where nature isn’t included.

This got me thinking of a recent report that came out about how in 100 years Hawai’i will be devastated by climate change. Sea levels will rise, there will be increased coastal flooding, and the lower parts of the islands are particularly at risk of disappearing. All the airports, which are at sea level, will be flooded, so how will food and fuel be delivered? So much will happen to Hawai’i because of climate change, it occurred to me that one of the things that will change are the chants. All the existing references that speak of certain places on the islands’ topography will change. Do the songs then become cautionary tales, or can they still speak of love, genealogy, and a recognizable home? Climate change will affect the topography, but it will also affect the music and dances.

How are we supposed to have reference? Nowadays, Hawaiian chants from antiquity have lost some of their meaning, but what is not lost are the places spoken of and their unique characteristics. You can still see them today, and you can see what the composer saw. If those places are physically affected by climate change, or even man-made changes, how do we retain the nugget of their meaning? It will be difficult.

My idea is to use nature-based chants for holding on to stories and references. I’m curious what references will be used in 100 years. Will they be about things we’ve lost? 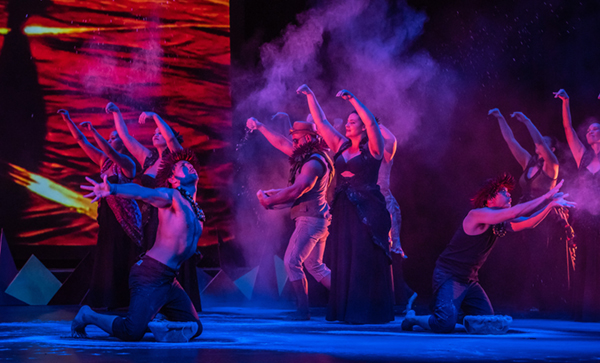 Unlike contemporary modern dance pieces, Hawaiian pieces are very short. I will have four pieces in the show. We open the show with a chant composed by a renowned master chanter from Kaua’i. Her name is Wahinekeouli Pa and she’s a favorite composer of mine who was born in 1862. Her chant, “Aloha Mai Au I Ku’u Aina,” is a perfect example of invoking the natural surroundings to tell a tale. It means, “I dearly love my land.” I personally have a deep affection for this place of my birth, but the sentiment seems cheesy in English. In Hawaiian, I know exactly what she’s talking about. She goes on to explain for five versus why she loves her land, but she never says it literally; she speaks metaphorically of the winds, rain and ocean. This sets the tone for the rest of my pieces.

The next chant speaks of rain and love, interspersed with a song in English called “Cool Water.” The chant is about fertility and water as a life-giving fluid. Contrasted with that is the English song about being thirsty and needing to have water. In 100 years, they are talking about how there will be severe periods of drought followed by flooding. From there, we move into a piece that honors the volcano deity Pele, the lusty goddess who is life-giving through lava.

In creating a contemporary hula piece that addresses a certain theme like climate change, what makes something essentially hula, and what can be changed or modified?

I use some very traditional movements and some movements that are re-stylized into more contemporary or modern movements. In traditional chants, there isn’t much audible fluctuation. What makes it interesting are the words, not the melody. As Hawaiians were influenced by Westerners, initially missionary hymns, the chants became more melodic.

Traditional dancing is close to the body, and the hands are rarely descriptive. Hula today is very stylized. You see the sun, rain and flowers through the physical movement. In traditional dancing, by contrast, the movements aren’t descriptive because the poetry tells the story. The gestures only offer dimension; you don’t have to make a bird motion if you’re saying it aloud. But today is very different from centuries ago, so there has been an evolution of movement, expression, and interpretation that offers a modern perspective.

Basically, hula is broken down into two categories. One is hula kahiko, and that means “ancient,” as “kahiko” means ancient or traditional. That hula is accompanied by chanting and percussive instruments such as a drum, gourd or rattlers of sorts. The other kind of hula is called hula ‘auana. Hula ‘auana is a more contemporary kind of dancing that is accompanied usually with singing as well as Western instruments such as the guitar, bass or ukulele. Hula ‘auana came out of the late 19th century. Many people would say these are imperfect category titles, because many dances do not accurately fit either category. Interestingly enough, the word ‘auana, denoting contemporary hula, does not mean contemporary. It means to “wander or drift.” These dances were given that name because they “wandered” away from the traditional protocols and rituals associated with the kuahu (altar) dedicated to the hula divinity.

How does someone recognize movement as hula today? Going back to our climate change theme, many movements in hula mimic the movement of nature—the waves in the ocean, rainfall, wind moving through the trees. Like any traditional art form, you would have to be a practitioner or have a familiarity which allows you to understand the fundamental movements and the line of connection. We’re not a modern dance company or a hip hop company; we’re a hula company. My dancers are trained in hula. When I introduce a movement, I have to teach it in a way that the movement vocabulary makes sense for my dancers, who have a hula background. But we can expand upon that background. In my last show, I used the lindy hop for a section, and that took months of hard work to accomplish. Fortunately, I have some dancers who are fantastic Lindy Hop dancers who whipped us into shape! That’s why it’s important to start with traditional movements, and then slowly morph, and then go back to tradition. We go in and out of touching the cornerstone of hula, and then jumping off the cliff while still staying tethered. 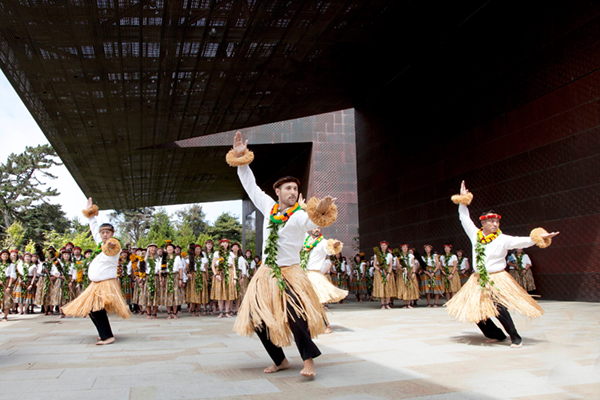 What is the role of hula in the social fabric of Hawaiian culture?

That’s a really good question. In the 1970s, Hawai’i experienced something called the Hawaiian Cultural Renaissance, and Hawaiians at that time were asking, “What is our native identity? Where does it come from? Who are we as Hawaiians?” Many of us, including myself, found that answer in hula. Hula served as a vehicle to teach us because hula is synonymous with Hawaiian culture. You learn the pantheon of gods, the history, the mythology, the ancestral beings, the symbiotic relationship with nature, and the deep love and respect for the natural surroundings. You learn how Hawaiians love; there are a million love chants. Some of them are so exquisitely written they just break your heart. You get an idea about how people felt towards one another, how they felt about their gods, how they felt about agriculture, how they felt about stars, the ocean. All of that is written in the chants associated with hula. So for myself, I was able to learn about my culture through hula. And I would venture to say that is how a great number of Hawaiians learn, even here in the Bay Area. Hula is so inextricably woven into the fabric of Hawai’i. I would say it is one of the most important cultural practices we have. And there is nothing comparable to learning and living your culture like doing it through dance.

A lot of people consider hula to be a simple-minded dance done in a grass skirt that has no meaning, but there is so much depth to hula, so much history and information; it’s really the story of our culture. How amazing is it that I get to dance that story? In my company, I have people who have been dancing for me for over 25 years. They never leave because they’re making such a strong connection to their culture through hula.

How is hula different in Hawai’i versus out of Hawai’i?

There are major differences. Today, there is another renaissance that has been happening for over at least a decade. It’s a renaissance of knowledge. People are substantially more enlightened and practiced in all facets of the culture, in every discipline. I’m constantly blown away, especially by the younger generation who are informed and fearless. It’s a rich cultural banquet back home that I wish my hālau (dance school) could feast on more frequently. Any facet of the culture seems to inform your understanding of hula. I return home many times a year and bring back what I can to my students. 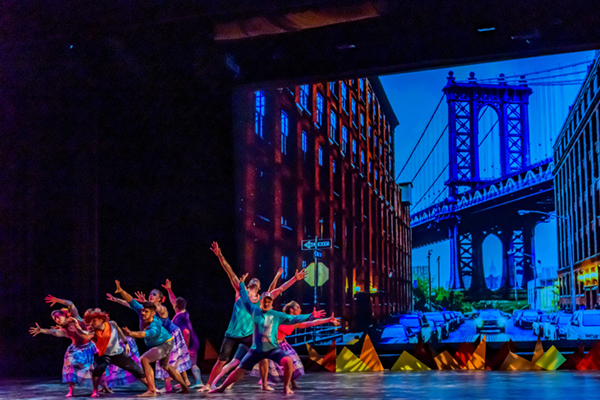 One of the differences in our favor here in San Francisco is funding. California and especially the Bay Area is more inclined to support the arts than Hawaiʻi. There just aren’t enough funds to sustain the arts, especially the hundreds of hula schools. However, here in San Francisco, we occupy a unique cultural niche because we are a hula school and we do receive a good deal of funding, which allows us to operate at a level that could never happen back home.

People associate hula so much with Hawai’I, but these days hula is really expanding. You would not believe it, but hula in Japan is huge and even in Mexico. There are more people dancing hula in Japan than there are in Hawai’i. Of course, some people have problems with that. How do you find balance?

Going back to the D.I.R.T. Festival, how is hula uniquely positioned to respond to climate change, given that Hawai’i is situated in the Pacific Ocean?

I’d always heard it was bad but doing the research for the show scared me. It’s too late right now to change course, but we can mitigate it. These are important issues for us. Maybe there should be hula festivals that address climate change as a theme. In Hawai’i, people are trying to go back to living closer to the earth. Really, Hawaiians were early conservationists. They lived on an island with limited resources. They became one of the most sophisticated aqua cultures in the world because they had to understand how to prepare for the future. Today, there are cultural practitioners who are relearning those arts and teaching them to the community. But we’re late. Man-made changes have already happened. What’s going to happen in 100 years will be devastating to Hawai’i both culturally and literally. How do we respond to that? 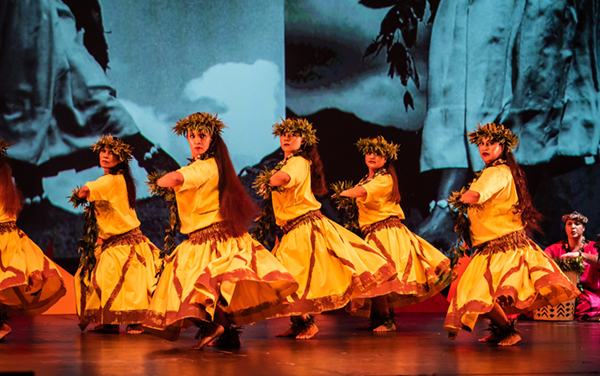 4 Responses to “Creating Hula in Response to Climate Change”