An Interview with Karen Sherman

Karen Sherman is a dancemaker whose work draws upon her background in dance, writing, theater, music, and the handyman arts. Her experience working in nearly every facet of arts production – as a technical director, production manager, stage technician, and scenic/sound designer – also informs her work. Here, she describes the development of her multidisciplinary toolkit, how she approaches dance-making, and her thoughts on dance’s unique tendency toward incorporating many art disciplines. 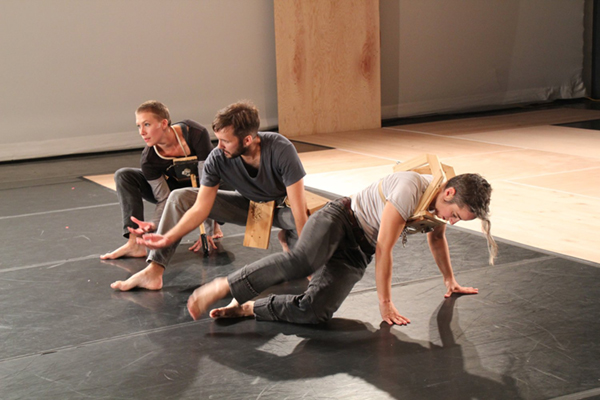 Can you tell me a little about your history and how you came to have such a multidisciplinary toolkit?

I started doing theater when I was quite young and was working professionally throughout high school. Dance was really terrifying to me — I attempted some ballet and modern classes but was mostly met with hostility because I wasn’t the “right” kind of feminine. As a queer girl growing up in the 70s and 80s, those kinds of dance studios felt like a very shaming environment. Dance in general seemed incredibly intimidating and unwelcoming to me and, as a result, I avoided it entirely and stuck with theater. (I only learned much later that theater can be even worse than dance in this regard.)

At 18, I moved to NYC to study acting at NYU and was required to take movement classes — not dance exactly but experimental movement and a slew of other body modality practices; forms that emphasized individuality and improvisation, that weren’t narrative-minded per se, and didn’t at all care for gender representations. It completely blew my world open. I was also coming out at the same time, which I don’t think was a coincidence — dance allowed me to explore and express my body, which allowed me to embrace my sexuality, which in turn allowed me to be more confident and expressive in dance (and in the world, in general). My body changed, my heart changed, my mind changed. I also hadn’t known there were other kinds of dance besides ballet, jazz and tap. My teachers in college taught me that dance can be in anything. But I didn’t become a dancer then.

I co-founded a theater company after college. For a long time, I was the only woman in it and, while I loved my colleagues, I didn’t relate much to the work we were doing. My day job was at Dance Theater Workshop (now NYLA), and my girlfriend at the time was taking classes at Movement Research, so I ended up becoming friends with a bunch of dancers. They started asking me to be in their shows and I said yes and then kept saying yes. I didn’t always say yes eagerly — I was often terrified and even tried to convince some of them that they really didn’t want me in their shows because I wasn’t a real dancer, but they were very persuasive. I didn’t call myself a dancer for many years, and I was choreographing for several years after that before someone casually referred to me as a choreographer and I realized, “Oh, yeah, I guess I do that. Huh…”

The writing thing has been there for a long time. I started writing seriously in high school. I had a phenomenal English teacher who was also a poet and who encouraged me to write. I often credit her with how I make dances because poems were the first art pieces I made on my own. In theater (specifically the kind of theater I’d been doing), you’re often working with someone else’s script and another person is directing you and there are other people designing…but poems you make all on your own, by yourself. That teacher taught me how one word can open up a poem in ways you didn’t anticipate, or that you can circle the poem back onto itself. All these ways you can construct a poem — the small choices you make that can have huge effects — are active in my dancemaking. I think she taught me to make something from nothing and then to keep working to tease out more from it.

As for the carpentry and general making of things, I don’t even know entirely how that came about! Except that I’ve worked off and on as a stagehand for 25 years and, in that job, you are often thrown into situations where you have to build things or create an effect of some kind. I think that made me develop a practice of thinking about art with my hands. I also have a love for design and a curiosity about how things work. Making stuff satisfies all those worlds. I love working in wood especially, including because it is cheap, readily available, and forgiving. 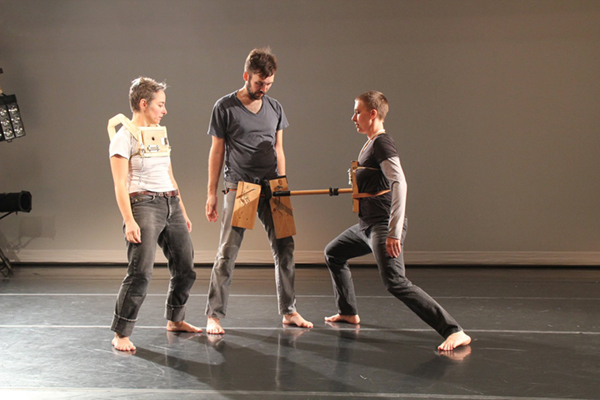 Gosh, it varies depending on the project, and especially if I’m making a group piece or a solo. I used to find solos easier than group pieces and now it’s the opposite. Even with group pieces, I often spend a lot of time alone in the studio. That time is usually the most fraught, and I joke that I spend 45 minutes of a two-hour solo rehearsal lying on the floor crying. The joke is that I’m barely joking. But most other choreographers I know feel the same way, so we at least can laugh in shared, tormented camaraderie.

For most shows, I keep a running list of images, ideas, snippets of text, lighting ideas, music, dance-based scores, movement ideas, or impossible tasks. Some are really involved, some are fleeting images. Some could take weeks to explore in rehearsal, some I never even bother with. These lists tend to run many, many pages. Even the ideas I don’t use somehow anchor or provoke the rest. When I don’t know what to do in rehearsal, I can turn to the list for a new idea even though the best ideas tend to be the ones I’m already actively trying. For most rehearsals, I plan several things to explore but typically find that the first one we try generates an entirely new thing.

I also start a playlist of music I think might work as well as music I know won’t work but that I associate with the ideas at hand. I also make my own music/sound so sometimes I will try to make something specifically for a section or I will dig through old sound files I’ve made to see if one of those might work. For a lot of my shows, we’ve also done a lot of writing in the studio, sometimes using words as the basis to make new movement. For example, for Soft Goods, I took the IATSE stagehand union vocabulary test prep sheet and had the dancers make moves inspired by technical production terms: pig iron, west coast, trim chain. I really like to talk about ideas and find that conversation with other people helps me figure a lot of things out. Even writing grants helps me to make connections I hadn’t considered before. So, my process is pretty wide-ranging. I’m up for almost anything. 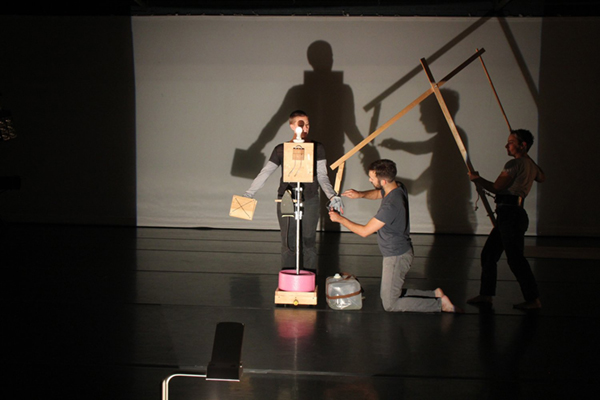 Usually, when people use the term “multidisciplinary” in dance, they refer to incorporating video or visual art. Dance-theater seems to be its own genre, and of course blending music and dance is as old as both forms. What are your thoughts on what multidisciplinary means? Are there certain disciplines that more easily fit under the umbrella of “multidisciplinary” than others?

I think dance in general often is multidisciplinary or at least has a great capacity to be since it so often incorporates other art forms — music, as you mentioned, but also lighting, scenography/visuals, costuming — many people expect those in a dance and feel affronted if they aren’t there. But text, objects, and video are all easily fair game, too, and don’t necessarily dilute the essential dance-ness of a dance. This might even be (one of) dance’s superpowers. Personally, I don’t use all those things in every dance I make but I always feel each is available to me if it’s relevant to the specific project. I think dance is the most magical of art forms; so potent and difficult and powerful, all at once.

I sometimes use the words multidisciplinary (or inter- or transdisciplinary) to refer to my work. But while it accurately describes what I do and how my work expresses itself, I probably use the term more to communicate with the larger dance/art world. My process is multifaceted (and as a result, so is my work) but that just feels natural to me. I still consider my work, at essence, dance. But other people (curators, presenters, audiences, etc.) often need more descriptive information, something that locates the work, pins it to the map, or signals what it might look like. There are other terms people have used to describe my work that I strongly disagree with! (Dance-theater being one — dance-theater is a specific genre, perhaps even tied to a particular era. I think when people have used that term about my work they are trying to say it contains both dance and theater, but that is different than dance-theater.) So multidisciplinary is accurate even if it’s a little vague.

My work is typically wry and funny, but I quite often pursue difficult subject matter—murder, isolation, alienation, failure. I tend to wrap sorrow and humor and reverence all together in my work and combine things that seem at odds with each other: violence/compassion, cruelty/ vulnerability, isolation/comfort, loss/pleasure. I focus on relationships, showing the individual in the world or the shifting of power within a group of people. Subtle acts of power or disempowerment seem to be recurring images in my work. Related, I’ve been interested lately in invisible labor. Not as a direct topic so much but more of an interest in the people themselves who do such work. My last show, Soft Goods, was about stagehands. My new project, Universal Donor, is about a lot of things but is centrally concerned with laboratory technicians, who, like stagehands, are the unsung hero-laborers of their industry.

I also often address politics, sexuality, and gender but usually in a sly way. I used to feel (and maybe still do) that just walking onstage as the woman I am already brings those issues into the room. Sometimes I overtly address them and other times I take the view that for however many minutes, audiences have to live in the particulars of an artist’s world, views, and life experience. This happens in all kinds of performance — drag is an obvious example of the performer’s reality/identity being asserted as the given for the rest of the room. In my case it’s more understated but no less explicit.

All these themes or motifs show up in my work because they show up in the world around me. But I also like to meander, so the ways in which they manifest are not always apparent. My favorite part of making any art is the alchemy — you think you’re making one thing, but it becomes something else, or because of how you combine and sequence images you end up saying something you never even consciously considered. I love when someone comes up to me after a show and says they saw something I hadn’t realized was there. That part is just…transcendent and nearly makes it all worth it. 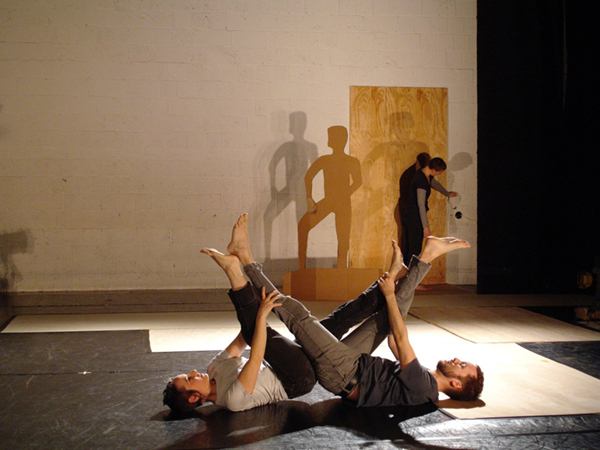