An Interview with Mariana Valencia

Mariana Valencia is a choreographer in New York who combines theatrical and performative techniques with her interest in ethnography. Here she discusses her focus on marginality, how writing informs her performance practice, and her questions about archiving and crediting work. 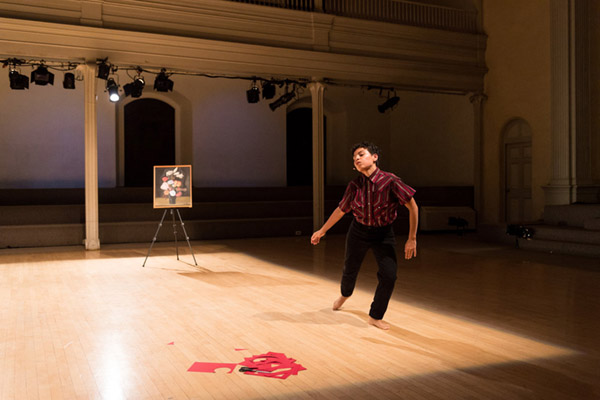 Can you tell me a little of your own history and how you came to see yourself as a choreographer?

I’ve always wanted to be an artist. When I started to learn more about choreography in college, I decided it was the form that best depicted what I was interested in making as an artist. Through movement and ethnographic research, I’m able to make the work I make today.

You studied both dance and ethnography in college – is there something inherently ethnographic about your work?

There are ethnographic aspects of my work, but I’m not a full-on ethnographer. Going places, learning about things, and talking about those things and the experiences I’ve had within my work is a big part of what I do. But it’s also a big part of how I live. For example, experiencing the sonidero dance scene in Mexico City was an interest, but I didn’t set out to make a work about it. It started out as research for research’s sake, and it ended up in my choreography as a retelling of my experience, not as a how-to. It was simply: “This is what happened when I went there.” My work is often a sort of introspective-retrospective. Sonidero was a populous way for me to experience somewhere else that represents a marginality I’ve always experienced within myself. There is power in finding commonality. I find that going places and experiencing the margin of other people makes it more obvious to me that more people are marginal.

This has become my common approach to making work. When I first made Sonidero, this approach was new to me. It included a lot of text – I talked a lot throughout the performance. That’s how the work was lived in me, so that’s the route I took. Because I took that route, I realized my work going forward needed more language alongside movement and timing.

One thing leads to the next. No piece is separate from the last; they all feed into each other and are related in a web or galaxy. What tends to happen is that I’m researching several things at once and then I find ways to represent the major subjects that I’m interested in. For example: What movement forms should I use to create the idea of Slavic and socialist histories in Eastern Europe? I’m also interested in vampires. The folklore of vampires is from Eastern Europe. What is a vampire? It sucks blood. Blood is also a thing that people with AIDS deal with. I’ve also been researching people who died of AIDS during the epidemic in New York. Bodies dying of AIDS and vampire bodies are akin to each other because both are ostracized from “healthy” bodies and both have a blood-related problem that is transmitted. One lives forever, the other’s life is cut short, but there’s a commonality between these mythical and actual bodies. Part of my lineage in my queer and creative history is the community that almost disappeared due to the AIDS epidemic in New York. Because of that, I don’t have a large elder community. That leads to: What is an elder community? What is a chosen family? I also have a chosen family, having come from immigrants. Immigrants make chosen-family nuclei. It keeps going and going. My themes branch out from show to show. Each show is presented separately, and I make choices in order for those individual subjects to be as clear as they need to be. As much as vampires are related to my cultural history, it still has to be specific and timed in a way that means something to someone who’s never met me and has never seen my work.

Is your work mostly improvised or set choreography?

It’s pretty set. The reason why it’s set is because I improvise within it. Because I do solo work, in the event I forget something or need to change something, I always have permission to riff or improvise, or even make things more casual, playful or pedestrian. Everything is set so I can break the set. I know every place I should go during any given sentence, but if it doesn’t go that way because the audience is giving me a different energy, then I can take permission and go a different way. In the rare occasion when the audience isn’t giving me something, I still have the choreography to work from. Mostly, people enter the work quickly and we have an exchange together that feels very candid and playful.

Do you do solo work because of resources or because of artistic preference?

At the moment, it’s my artistic preference. It has proven to be cheaper, but it’s still expensive. At least I don’t feel guilty that I can’t pay myself as much as I wish. My work is semi-autobiographical and based on the things I’m interested in. I could create work on someone else, but I enjoy the performing of it as much as the creating of it. I also enjoy the idea that the kind of work I choose to make, this movement and time-based work, can only be archived in the body. There’s no other archive that completely captures the work. I like holding on to that archive for myself. 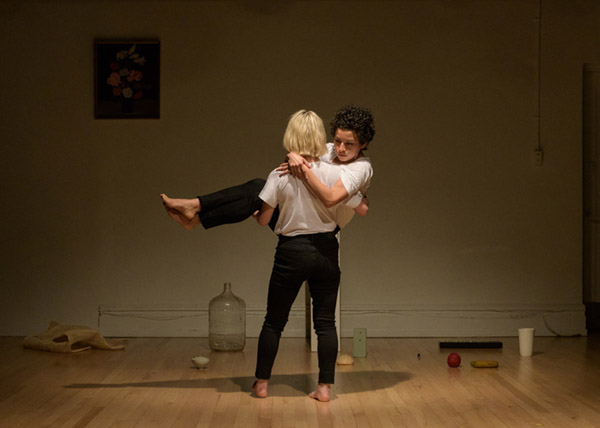 Are there certain themes or issues you feel are particularly important to you to keep tackling and addressing?

Marginality is the main one. I came to it by asking myself questions like, “Why aren’t books written about people like me?” It’s because people like me don’t get to write books. I started finding a place of power for myself within all these social and cultural deficits. I realized that if I want to see more work that includes me in it, I have to make it.

My work becomes accessible to a lot of people because they can empathize. Even when I performed in Serbia, the audience was really with me. I’m dealing with basic tropes. If you don’t necessarily have a parent who died, like I did, maybe you know someone who has died. Or maybe you don’t, but the way that I’m proposing it is both lively and severe. There are lots of entry points.

You also write about dance – can you tell me a little about your writing practice and how it informs your dance practice?

I’m not sure if I write about dance, so much as my writing becomes dances. My writing practice stems from my studio practice. It’s always been a companion to my movement work. Every dance is based in words that come from a text I wrote, whether that’s the dance being described, or notes to my dancers, or observations of a landscape that was intuited into a movement score. It’s not writing about dance, but it’s a form of dance-writing.

I haven’t been published yet, but I have a book coming out soon by a small publisher, Wendy’s Subway. They are publishing a document series of performance texts. This is their first season, and my book is the first one in the series. They are producing 300 copies of my performance text from ALBUM, the show I did this past year. The book is also called ALBUM and comes out in November.

The work as a book manifests in ways a performance can’t. I’m proposing the page as a stage. It’s not supposed to replicate the experience of having seen it live; it’s supposed to create an experience of having read it by yourself. There are indexes, descriptions of how my body is moving, annotations giving background to certain concepts that come up in the performance, and the performance text itself, which is comprised of everything I say in the show, as well as songs I’ve written and performed in the show. You don’t need to see the show to experience the book on its own terms.

In your experience, are platforms for and representation of marginalized artists improving over time?

If the system is flawed, how do we change that? A lot of people are confronting that question and doing it themselves with resources that are both public and private. More people are self-empowered across the board. People are asking: If the system won’t carry us, how do we carry ourselves together? Because of that, access points are becoming more visible.

Sure, institutions are including a wider spectrum of communities. But I don’t think that happens without artists, makers or even academics saying this is enough and we need more access.

What are you working/focused on now?

I’m working on a show that premiers next April at the Chocolate Factory Theater here in Long Island City, Queens. It’s entitled Bouquet and branches out of a previous piece called Yugoslavia. The work looks at what is authorship in movement-based forms. Authorship in writing, for example, commonly quotes other people’s research. In performance or dance, work isn’t credited. Choreographers aren’t like, “That high kick in minute 25 is from when I first learned it in my dance studio as a kid at the strip mall.” This discredits dance as a researched form. It’s similar with a painter, who says, for example, the painting is made with oil and these are the dimensions of the canvas. The don’t say: it’s made with 16 ounces of blue paint. What composes something? How is it broken down? Most often, we’re recreating something that’s already been done or experienced, and reinterpreting the world as we see it. Bouquet is about how we transmit ourselves to each other and what we get from that exchange. 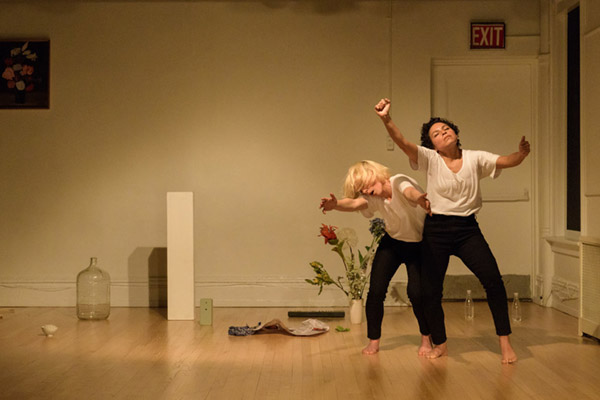