Trina Mannino is a dancer, choreographer and writer in Brooklyn who recently embarked on the project Ghost Women: A Dance and Knitting Installation, a 30-minute outdoor performance featuring a multigenerational cast of knitters and dancers. Sparked by conversations about aging and the duality of feeling invisible and objectified in contemporary culture, Ghost Women flies in the face of ageism and encourages viewers, particularly older female audience members, to see themselves reflected in performance. The artists will perform in and weave knitting through Sarah Finkle’s crocheted rope installation in Triskelion Arts’ courtyard in Greenpoint, Brooklyn, September 13-16. Trina, Sarah and performer Carol Chave weigh in on the themes and relevance of the piece. 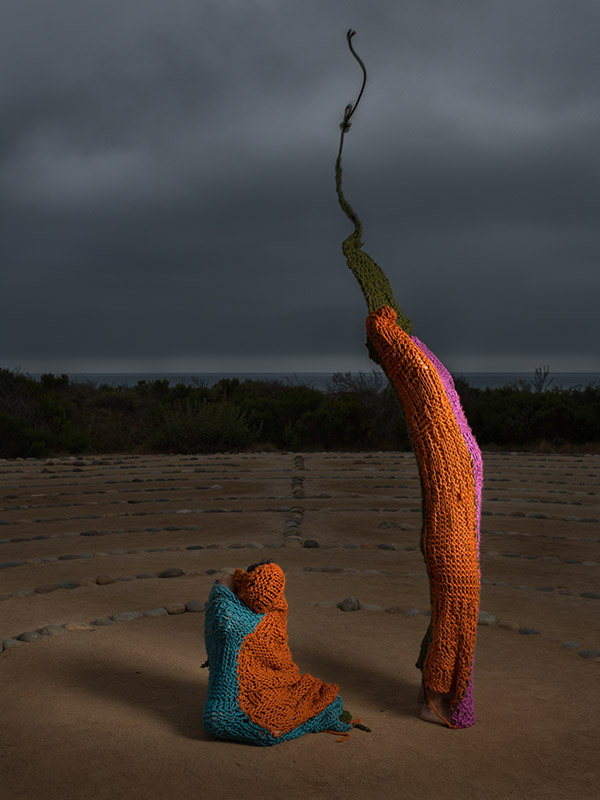 Why did you decide to make Ghost Women?

The work came out of a duet I created with my long-time collaborator Misa Kelly, who is a dancer and visual artist based in California. Misa and I had worked together in various capacities with the collective ArtBark International. Since I live in New York, the way we generate ideas is through Skype sessions and YouTube videos. Growing older in dance, ageism and sexism were topics we talked about, and, throughout my knowing Misa, she’s always knitted. It was through these conversations and early digital rehearsals that Ghost Duet emerged, where Misa and I danced in and out of these knitted bags she made. It also included a sound recording of Misa talking about growing older as a performer. Ghost Women is more abstract. It takes that earlier idea and reimagines it in an installation rather than on a traditional stage with more performers and live knitting.

Why did knitting seem an appropriate means of exploring age and invisibility?

In the bags that Misa created for Ghost Duet (they do make an appearance in Ghost Women), I was struck by how little I could see while dancing in them. It felt disorientating but simultaneously liberating. It made me reflect on (this was shortly before the #MeToo movement) the dualities that live within me—feeling exploited when men talk on the street about my body, for example, yet the desire to want to be seen and heard. The knitted installation and bags represent this duality. This work has allowed me to feel empowered and assert myself in the world in a way I haven’t experienced before.

This project has been a joy to research and rehearse. The cast is enthusiastic, hardworking and collaborative. Several of the cast members are both knitters and dancers so they have been able to give feedback and contribute ideas on how the two forms interact.

I love that the cast is of various ages and are at different points in their careers. The mature artists have so much body knowledge and memories to cull from while young cast members are eager to learn and absorb. It feels very much like a big family.

How does dance and knitting complement each other in ways one might not expect?

Dance—at least in the concert sense—is performance. It’s meant for others to see. Knitting, on the other hand, is often done in private spaces—at home, in a knitting circle with friends, and the like. It’s fascinating to see these two forms butt up against one another.

Then there’s knitting’s inherent rhythm. When you watch an adept knitter, there’s a constant flow to their work. It’s often quite percussive, yet contemplative and steady. I thought, can we adapt these rhythms to the body?

But what’s most striking about the two is that, while dance is fleeting, knitting and fiber arts lives on. Immediately after the movement has ceased, the memory of the dance begins to recede. With Ghost Women, the finished knitted installation will continue to be on view at Triskelion Arts after the festival. I like to think that the memory of the dance will live on in the fiber. 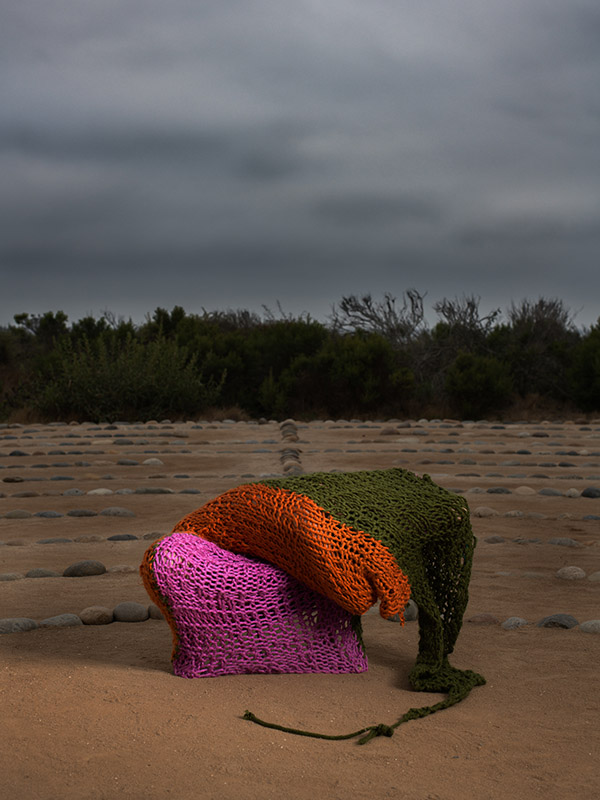 Carol Chave, a performer in her 70s

Why does Ghost Women feel relevant to you?

From the beginning of human life on earth, mankind has intertwined fiber to make mats for sleeping, baskets for food, and nets to catch fish; and, s/he has also danced to communicate, to celebrate, and to experience the sheer joy of movement. Ghost Women combines these two primal activities in one ambitious experiment.

What have you learned through the process of making Ghost Women?

The intertwining of fibers and of movement, as each of the participants contributes her perspective to the whole, reminds each of us of our interrelationship with each other and with our world, which is something that we relearn anew every day. 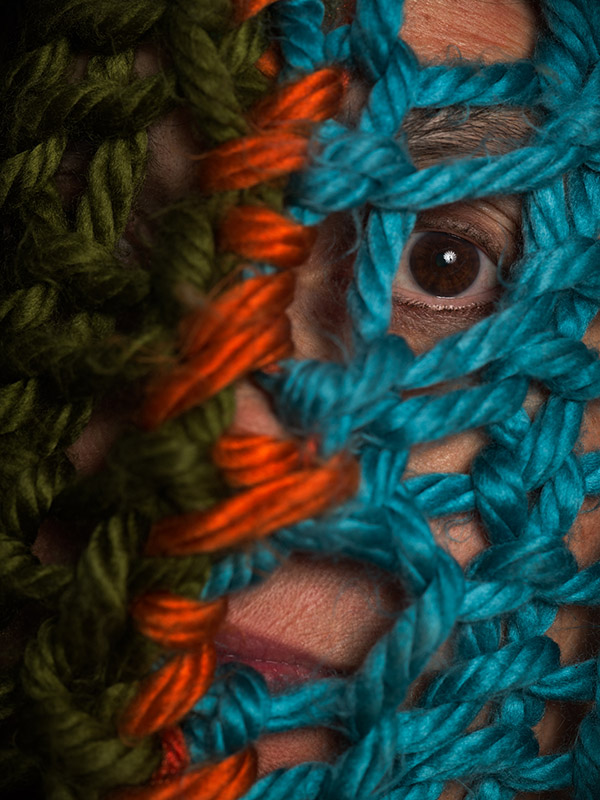 Why does Ghost Women feel relevant to you?

I first became involved with Ghost Women when Trina reached out to me to create an installation for the performance. I was intrigued and excited to learn the performance would be combining dance, knitting and interaction with the installation, as in my own practice I have been working more towards creating interactive sculptural work and set design. When Trina further explained the work to me, I was even more excited by the prospect of this as a means to discuss women, their visibility, and the expectations and limitations that are imposed onto them. Other work I have been involved with, most recently a show called You Sound Like A Girl, deals with similar themes about the importance of bringing visibility to women’s voices, breaking down expectations, and letting women express themselves however they choose, so being involved in this piece feels very relevant and important to me today.

How does dance and weaving complement each other in ways one might not expect?

I feel that weaving and dance are very connected in process. As with dance, weaving, along with other textile practices, involves full body participation. It is a very active art form. The act of weaving can even become a sort of choreographed movement; there is a repetition and flow that happens when a weaver is fully engaged in the process and a fluidity to the motions once muscle memory takes over. It’s a clear set of movements used towards creating a finished work.

What have you learned through the process?

In the process of participating in Ghost Women, I have learned a lot about dance and collaboration. Dance is an art form that I love and appreciate but it is something that I don’t know much about in terms of the practice or career side, so I was very fascinated to get some glimpse into that realm and learn about the limitations that are placed on women based on age, etc. in the dance world. It has been a wonderful process working with Trina in collaborating on the installation. I feel as though we really struck a wonderful balance of wanting to make sure what I create fits the needs of the performance and performers, as well as her letting me have the freedom to do what I love and bring my own voice into the work. 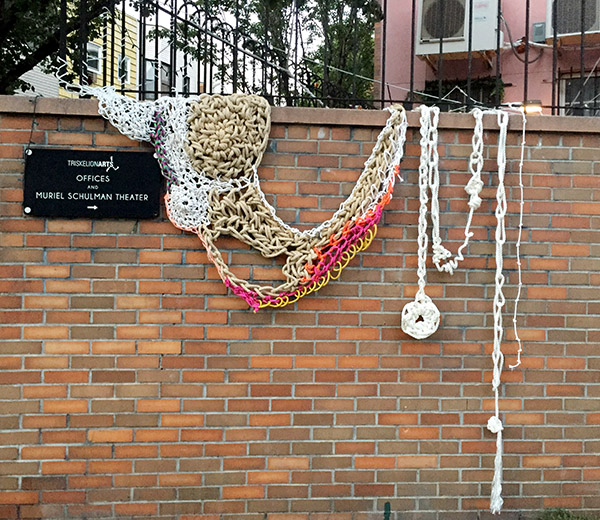