Vangeline is the director of The Vangeline Theater – an all-female Butoh troupe – and the founder of the New York Butoh Institute. She discusses the lineage, gender politics and changing landscape of Butoh, as well as the stereotypes and misconceptions that haunt the art form. 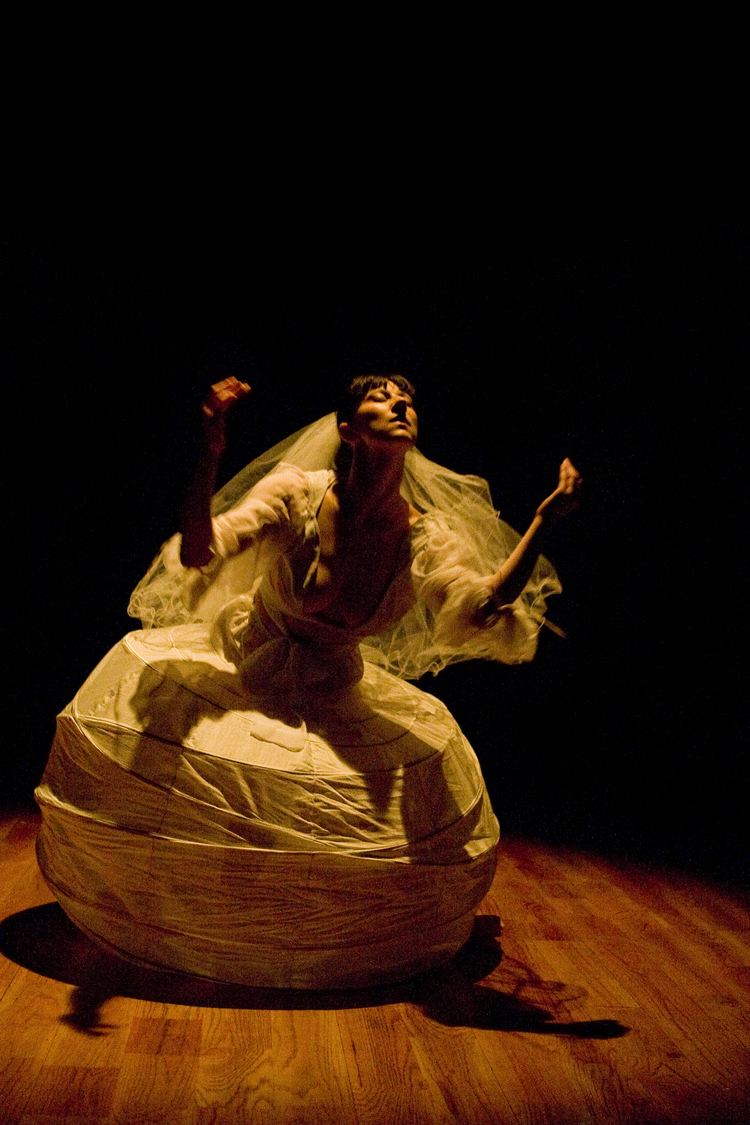 What was your introduction to dance?

I started my dance training in 1983 in Burgundy, France. My first passion was jazz dance. In 1999, while working as a dancer in New York, I stumbled upon a Butoh performance at BAM.

What is it specifically about Butoh (as opposed to other dance/theater modes) that appeals to you?

A subtext for Butoh could be: “Through the Looking Glass.” In Butoh, dancers go deeply into another realm. This realm exists beyond the material world in our collective memories and shared history. It is the realm of the hidden, of the subconscious, of things we usually don’t dare look at in ourselves and in others. Butoh reveals our deep humanity.

How would you define contemporary Butoh as opposed to traditional Butoh?

Because Butoh has such a short history (60 years), I think the word “traditional” is misleading, particularly because Butoh already represents a departure from traditional art forms. However, we can talk in terms of generations in the Butoh lineage, as well as cultural background and heritage. While Butoh originated in Japan I, for example, belong to the third generation of Butoh, and am not Japanese. Additionally, I am a woman practicing Butoh in a male-dominated field. Contemporary Butoh is split between Japanese and non-Japanese practitioners. This is a very interesting phenomenon. Contemporary Butoh is an art form that is gradually shifting from a mono-cultural male experience to a more inclusive, global experience. 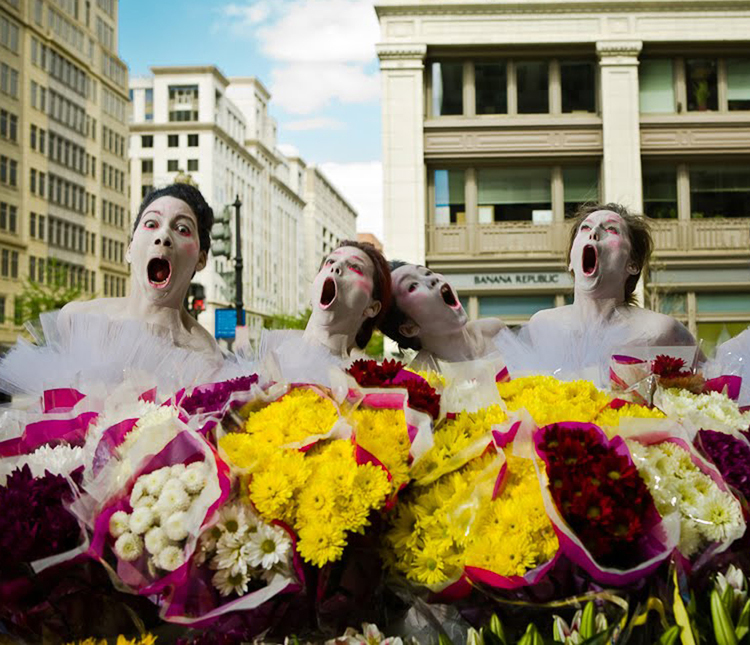 Why do you feel it’s important to have The Vangeline Theater be all female?

As a woman, I am interested in the female experience, and am committed to giving women a voice and a place in our male-dominated field. I feel that women have been excluded for a long time from meaningful participation in our society. This is evident in the dance world, and is a problem that is being discussed more today. Tied to that fact, representations of women in the media are completely warped; women’s beauty and looks are still more important than their contributions to society. In my work, I use Butoh as a “révélateur” (or developing path) to help us see women beyond this limited construct.

Women go through complicated experiences as a result of our predicament in the world. Societal expectations are a real hindrance. We often internalize these expectations and the patriarchy. Butoh, as an art form, gives voice to these complex realities and experiences that are mostly repressed and unacknowledged.

As Shakespeare wrote: “All the world’s a stage, and all the men and women merely players.” Butoh gives women freedom to exist more fully on that stage, and redefine the rules of the game. Since Butoh is male-dominated, and carries the seeds of patriarchy, I made a choice to prioritize women’s experiences in order to facilitate change.

To illustrate this point: the cultural representation that dominates Butoh today is of a semi-naked male body with a shaved head. The male body is placed on a pedestal and the male experience is often prioritized in Butoh. Interestingly, in the 1970s, Tatsumi Hijikata worked almost exclusively with women. His star pupil, Yoko Ashikawa, is often considered the most accomplished Butoh dancer in the world. What happened between 1970 and 2017? A few years after Hijikata’s death in 1986, facing violent opposition and jealousy from men in her own field, Yoko Ashikawa stopped dancing. Today, 98 percent of successful, professional Butoh dancers are men. As Butoh spread across the world, patriarchy supported the male expression and placed more value on the male experience.

These are hard facts we need to look at if we want to engage with Butoh. As a student, I saw great irony in studying with male teachers; the hidden message was that women were good enough to pay for classes, but they could never aspire to be as good as men. I am therefore committed to showing by example that women can be as successful as men, and aim at improving gender representation in Butoh, so female students and dancers can feel that Butoh is a realm that is accessible to them. 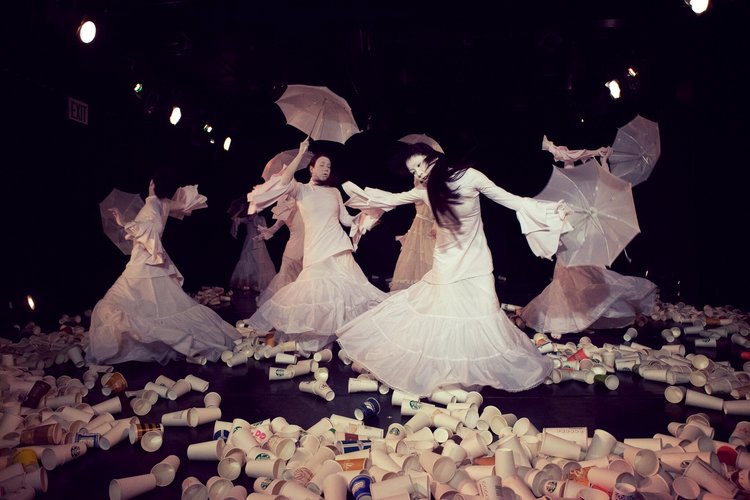 What was the impetus behind founding The New York Butoh Institute?

Dance is admired on stage, but is learned through classes, with teachers. Dance education is a very important aspect of The New York Butoh Institute. We teach the general public, and also teach at correctional facilities. In addition, we are engaging with neuroscientists to gather scientific data about Butoh. We are part of a movement reexamining the culture of dance and working on protecting the rights of female students in the field. Butoh is slowly evolving; there is a greater need for scientific research, an examination of teaching protocols, and documentation of all the different methodologies. We have reached a critical time in the art form’s development, as many second-generation dancers have passed away.

As Butoh has become more global, how important is it that new students study the Japanese lineage of the form?

I think it is essential for non-Japanese to connect to the Japanese lineage. Butoh was born in Japan and the second-generation is mostly Japanese. Without even going to Japan, it is difficult to appreciate how revolutionary Hijikata and Ohno’s work was at the time. So many aspects of Japanese culture and history form an intrinsic part of Butoh. Without making an effort to understand Japanese culture and traditions, it may be challenging to appreciate the art form.

Today, Butoh is an encounter between cultures. Yet, we should guard ourselves against the tendency to stay home, sample a Butoh workshop and not step outside of our cultural comfort zone. This being said, Butoh as a method can be used with non-Japanese to reach the universal side of our human experience.

Personally, it is important to stay connected to the Japanese lineage since I stand on the shoulders of Japanese men and women. Even though I draw from my own cultural heritage, part of my work is to continue exposing myself to Japanese Butoh. This encounter between different bodies and cultures continues to plant the seed for Butoh’s development. 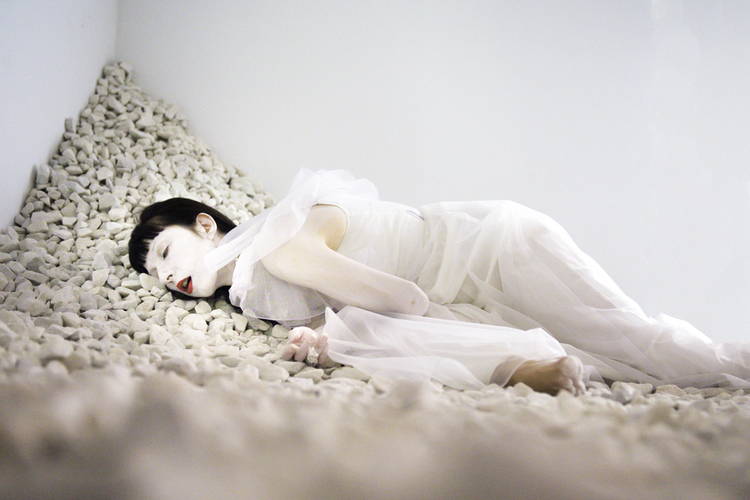 What are common misconceptions about Butoh?

Because we live in a world inundated by visual imagery, and because we rely so heavily on the internet, images of Butoh are slowly replacing the experience of Butoh. However, Butoh must be experienced, not just seen on video or in images. As a result, many people who merely go through search engines think that Butoh is a dark and nefarious art form. While it can be frightening to confront our fears, Butoh is also deeply touching: great Butoh performers are vulnerable on stage.

The greatest misconception, to my mind, is that Butoh is “grotesque” and “provocative.” These terms come up very often in published articles. I think that Butoh was provocative in the 1960s, and I think that some of the aesthetics of Butoh are/were grotesque – the quasi nudity, the facial expressions, the contorted bodies. But I think that these elements are more representative of Butoh styles than of Butoh as an art form. Equating Butoh with these elements is the equivalent of stating that the aesthetics of one ballet define ballet as a whole, or that an actor who plays the Elephant Man is only capable of playing this particular part. In the end, this emphasis on style, or aesthetics, is indicative of a lack of understanding of dance or theater techniques. Butoh dancers use specific techniques, which enable them to transform on stage. We should not confuse these techniques, which are the foundation of the art form, with their intended result.

Yet, the most sensational examples of transformations continue to capture the imagination. For example, when I am hired to work in a music video or a film, out of multiple takes, directors will invariably edit and choose the performance which, to them, is the most shocking and sensational. Thus, stereotypes continue to be propagated. Butoh has been stereotyped, and our generation is also fighting to rescue Butoh out of the “horror” genre.

How have you seen Butoh evolve since you started practicing the form?

Since I started in the late 1990s, Butoh has become more accepted in popular culture, yet by the same token, has been perhaps more stereotyped. There are more and more women practicing and teaching Butoh – this makes me hopeful. The art form welcomes more diversity of expression.

What do you foresee will be the future of Butoh?

Butoh is a niche field, yet it has revolutionized other fields in performing arts. It has had a great impact as a healing art as well. It is very difficult to see what is in the future. What I do think is that Butoh, the dance of transformation, keeps transforming and evolving. It is inevitable and should be welcomed. 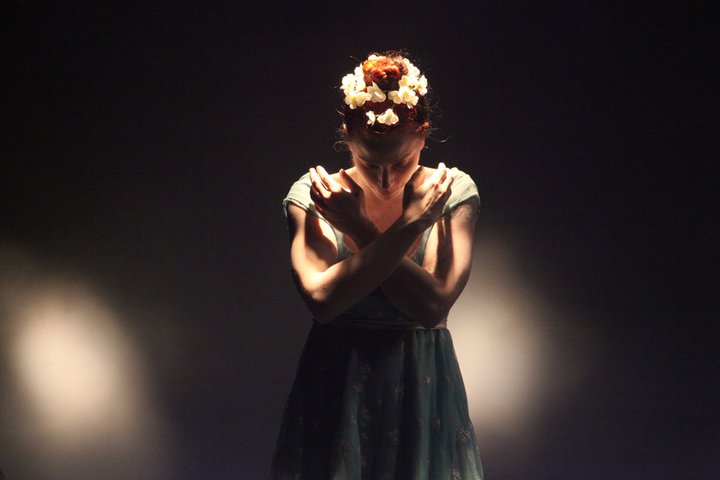