An Interview with Alice Sheppard

Alice Sheppard is a dancer and choreographer who splits her time between San Francisco, New York and the United Kingdom. Her work is most notable for exploring the intersections between disability, race, gender and sexuality. Her newest work, Descent from Beauty, is performed on a large ramp, and takes its inspiration from the sculpture of Rodin. 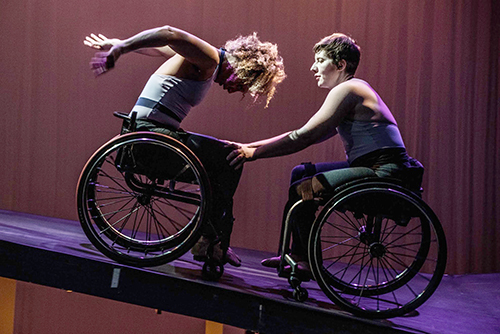 What motivated you to create Descent from Beauty?

The first inspiration was that feeling of riding downhill, like on a bicycle. There is tremendous movement pleasure in just letting go and riding a slope. I know that sounds like a small thing to say, but it’s such a simple act. Something my friend Simi Linton said in her film, Invitation to Dance, is that movement pleasure is not often recognized for disabled people. I hope Descent from Beauty both communicates movement pleasure and invites others to share in it.

With that is an observation not new to me alone. Wheelchair users have often noticed how ramps that give access to buildings are often around the back, or next to the dumpsters, and often not designed aesthetically. They are seen as functional devices but are rarely integrated into the building. There’s a way in which this is discriminatory. It’s not enough to just get in the door. Separate is not equal; we know this from other contexts. It’s a question of how we enter the aesthetics of architecture. What is the social and cultural meaning of making an entry?

These ideas intersect with the work of Sara Hendren, whose project, Slope Intercept, explores movement access at play and in public spaces. I connected with Sara through a friend, and asked if she would be able to make a ramp. I didn’t really know what I was asking, but Sara shared the project with a colleague, Yevgeniya Zastavker, and her students at Olin College. In the course of one semester, we worked together on several possible designs. Finally, the students built a prototype which we then took to be the final design for the ramp.

As far as the movement vocabulary, it engages ideas of race, disability, queerness and beauty by using projections of Rodin’s sculptures. Rodin was a pivotal figure in defining feminine beauty in a Western Classical European context. But he’s quite fascinating; the stuff he says about race, femininity, beauty and deformity is wild and out there. For instance, the statue of Venus and Andromeda has often been read as queer, with two women in suggestive positions. Andromeda is traditionally Ethiopian in Greek mythology but, by the Renaissance, she’s been whitened. In some ways, what I’m doing is trying to restore that racial and ethnic heritage with my own body. From there, I investigate the relationship between Venus and Andromeda as interracial. We literally embody the statues in and out of our chairs. 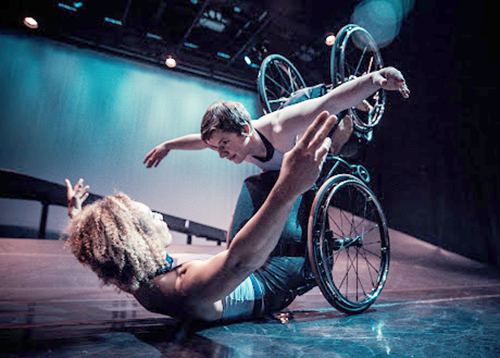 Disability is often presented as white; people are not used to thinking about intersectionality in disability work. Once disability appears in the public imagination, other intersections fade. One thing I’ve found difficult is balancing the attention the ramp has received against the larger themes in the piece. I refer to the ramp as a dance partner because it dictates the choreography; we can’t dance on it as we would a flat surface. At the same time, the damn ramp is upstaging us!

As a choreographer, how important is it to you to be recognized as black/female/having a disability? Is it important that people view your work through these identifiers?

I understand there is a double trap here. The stakes are different for each identity. I am very unhappy when I get defined by what somebody else means by the identifying word, rather than what I mean by the identifying word. For example, people will often say, “I don’t want to be defined by my disability.” I get that, but what I hear the person saying is: “I don’t want to be defined by the negative stuff societally attached to the medical diagnosis that is my impairment.” Disability is more than an impairment, and I personally choose to work from the larger aspects of disability as history, culture, tradition and aesthetic. I understand my definition does not meet most people’s definition of disability. There is very little connection between the two. I own who I am and want to bring it to my work. That’s what I mean when I bring disability into the context of my work. 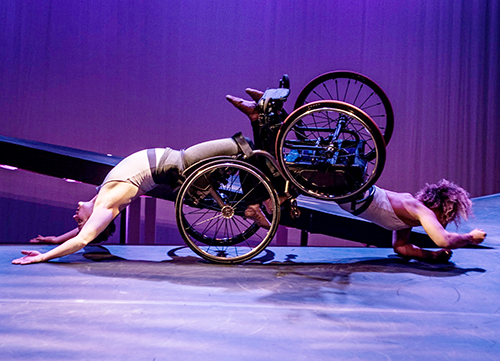 What changes do you believe need to be made in dance culture to support better representation of voices?

We need to allow for more complex narratives, and not have there be one notion of black dance or one notion of disability/integrated dance. Teachers, students, dancers, presenters and funders need to take risks, and also to step out of the way. I feel like I need to say that booking a disabled artist is not necessarily any bigger of a risk than booking any other artist. However, we need to allow the complexity in the field to emerge, and to support it.

What do you hope audiences take away after seeing your work?

I believe any work of art has the power to change someone. That being said, I’m not sure I want there to be a specific take-away.

I don’t necessarily need there to be change, and I don’t think there is one takeaway. But I do want people to have an experience. I hope they are stirred up. But I don’t want to prescribe or predetermine any outcome as a result of seeing my work. 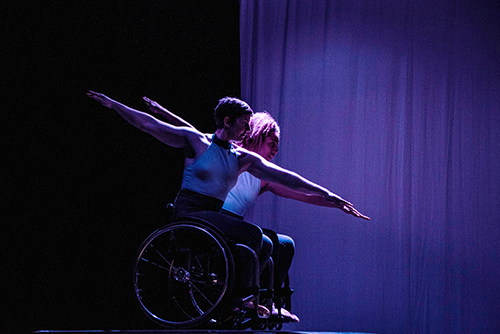 Descent from Beauty will be presented throughout the next year. Visit KineticLight.org for more information.

Alice Sheppard studied ballet and modern with Kitty Lunn and made her debut with Infinity Dance Theater. After an apprenticeship, she joined AXIS Dance Company, with whom she toured nationally and taught in the company’s education and outreach programs. Since becoming an independent artist, she has danced in projects with Ballet Cymru, GDance and Marc Brew in the United Kingdom. In the United States, she has worked with Marjani Forté, MBDance, Infinity Dance Theater and Steve Paxton. As a guest artist, she has danced with AXIS Dance Company, Full Radius Dance Company, and MOMENTA Dance Company. Alice’s choreography has been commissioned by CRIPSiE, Full Radius Dance Company, and MOMENTA Dance Company. Alice is the founder and artistic lead for Kinetic Light, a collaboration with dancer Laurel Lawson, lighting and video artist Michael Maag, and professors Sara Hendren and Yevgeniya Zastavker of Olin College.

2 Responses to “Exploring Intersectionality Through Dance”