An Interview with David Herrera

David Herrera, artistic director and choreographer of the San Francisco-based David Herrera Performance Company, explores the implications of race and racism in his work. 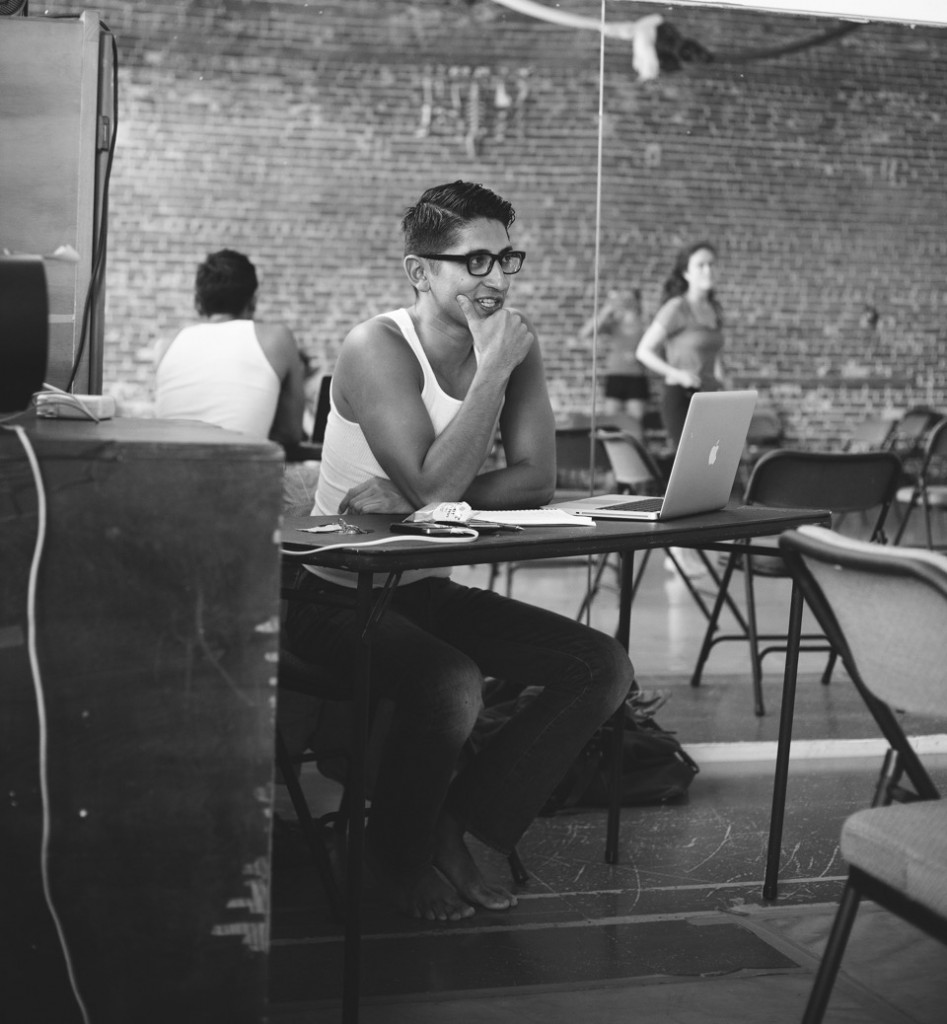 What is the impetus behind your work?

It goes back to my personal history and how I got started in dance. In college, I was training to be a stage actor. My professors told me to take modern dance classes to open up my mobility, and it quickly took over. However, when I looked into professional opportunities, I wasn’t seeing people of color.  It slowly started to get to me because I kept going to these great shows, and yet I never felt represented in them.

I wanted to build a company that represents my perspective as a Latino. And not only my perspective, but that of my community as well. I love the abstraction of modern dance, but when I would bring people from my own community to watch a show, they didn’t relate. They would say, “Oh, that was beautiful, the dancers are such athletes, but what was it about?” It didn’t help that most companies were largely comprised of white members.

My company’s work is about the experience of the Latino diaspora. Last year, we did a show about the immigration experience, specifically about what happens when parents get deported and their children end up living in the U.S., floating without any family unit. The season before that, it was about the poverty in Latino culture and how that gets ingrained in our identity, how poverty becomes associated to skin tone and culture, as opposed to a socioeconomic situation.

This year, I want to focus on why we make choices to distinguish “me” versus “them.” These viewpoints have been blowing up nationally. People who have really strong biases and misconceptions about others’ race and skin color are increasingly feeling liberated in voicing those opinions and acting out.

I ask myself: Are the various sides talking with each other, or only against one another? At times, when I’ve tried to hire people of color, they’ve voiced concern about being identified as a dancer “of color” and doing work on that topic. It’s true, we often have to pick our fights carefully, but we sometimes do so to the detriment of ourselves.

I don’t want to criticize dancers who choose not to, but I wish there were more who were willing to risk the label and prove, even though we are coming from a specific point of view, that we belong here just as much as the next person. We have value and things to say that are necessary and need to be heard.

I wish that the dance community could recognize that more, and maybe acknowledge our place and embrace that. We often hear companies say they embrace difference and other cultures, but just because you’ve hired a dancer of color doesn’t automatically mean you’re really tackling the issues. You may have hired someone, but that’s not enough.

Can you tell me about your personal history?

My parents are both immigrants from Mexico. They came in the mid ‘70s and are now naturalized citizens. I grew up in Hollywood, of all places. There we were, an immigrant family, living in one of the most American of places. The dichotomy of it, the shiny Hollywood glamor on one hand, and the poverty and marginalization of being a person of color on the other hand, didn’t go above me even as a kid.

I acted very differently at school than at home because of it. I watched what I said and rarely spoke Spanish, even though I’m fluent. And, I hate to say this, but I rarely brought my family to school functions. I would deny my poverty and never disclose that I grew up poor. I would downplay my parent’s immigration experience.

My parents, because they were immigrants and we were cash-strapped, regarded extracurricular activities like the performing arts as a luxury, one we couldn’t afford. They were blue collar workers for whom the most important thing was to work, put food on the table and pay your rent. That was their whole world; it’s all their experiences and financial position could provide.

They never saw my performance work until my senior year in college. It wasn’t until I had my company when they saw a full production, and then they realized I was serious. They kept thinking this was a phase I was going through.

It’s not their fault they held these beliefs. This, coupled with the marginalization we felt from mainstream U.S.A., is why I kept my lives separated, and unfortunately damaged myself in the process. I realized this when my own family started calling me “white-washed” and “gringo” in late high school and early college. It was playful, but there was truth to it. I was distancing myself from my own culture.

I was constantly told by white friends that I wasn’t “one of them,” meaning, “We understand you are of Mexican heritage, but you’re not really Mexican. You’re more like us. You’re an American.” I was an honor roll student, student body president, and editor of the school paper. I had all these achievements that others claimed as white traits. In a way, those achievements made it easier for people to deny me my own heritage.  When I would reply, “No, I really am Mexican,” those people didn’t want to know or understand that part of me. It was sad, because I was praised and embraced, but denied, all in the same “compliment.”

Having this dual identity meant compromising who I was for a long time. It got to be so bad that I started believing I was better than others in my community because I had achieved so much. When I was in high school, I was made to take tests in every subject to prove I didn’t need to be in ESL (English as Second Language) classes, and because of that I wouldn’t speak to those students who were. In social situations, I would sit with the popular group—all white students—and sit away from the Latino students. I couldn’t even sit facing them, because I didn’t want to deal with the guilt of abandoning them. But I also felt that I had to carve this niche to change people’s perceptions of what a Latino person is like.

I wasn’t proud of this behavior at all. When I got to college, I started to say to myself, “You need to do some reading and soul searching.” That’s when I made a choice to be an artist working for the Latino community. 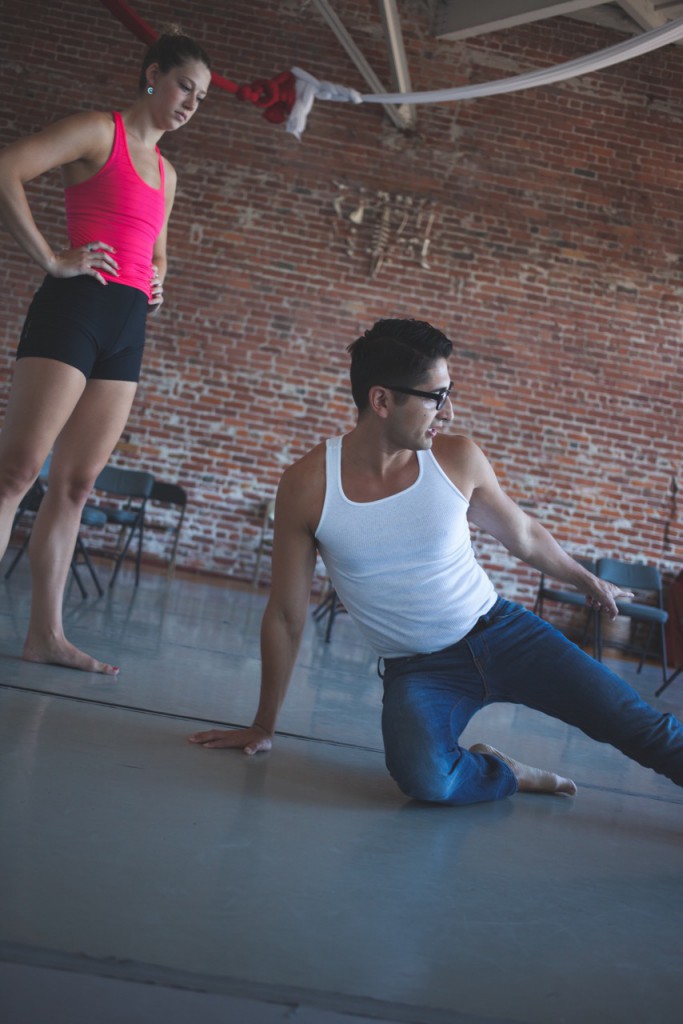 What does your newest work specifically address?

It’s about skin color and perceptions of race. I’m purposely confronting the audience on this subject. I’m asking, “What part do we play? Are we stepping up to the plate for others? Or are we standing on the sidelines and letting things happen and, in that sense, being complacent. What are our own biases we carry because of our cultural and personal histories?”

In making the work, I asked my dancers to think about a time in the last year when they caught themselves thinking or acting on a thought against another person based on that person’s skin color. And then I asked them to make movement phrases apologizing to that person. This was not easy for the dancers. Having to confront themselves was automatically problematic for some of them.

I’m using the idea of labeling, how we can’t seem to escape it, and how most of the time we have no choice about who we are perceived to be based on our skin tone. Who do you perceive yourself to be? Who do you perceive others to be? What experiences do we have and give each other based on that perception?

The dancers have expressed concern about blatantly confronting the audience with issues around skin color and race. There are going to be some unapologetic moments in the piece. But we need dialogue around these issues. One example I always give is with the Black Lives Matter movement, which then was followed with a counter movement in the form of “All Lives Matter.” But Black Lives Matter isn’t against other races or people. Rather, they are pro-black experiences.

It’s a hard realization to come to when the movement is unapologetic and in your face. But Black Lives Matter doesn’t want to sugarcoat the black experience. They need people to understand what is happening to them.

That’s similar to what I want to keep pushing with my work. I want to say: We are here. Our streets and cities have Spanish names. There is a rich Latino heritage embedded in so much of America, and yet that culture gets submerged.

How do you interact with the Latino community here in San Francisco?

This has been a hard thing for me. The Latino community itself can be closed off when it comes to the arts and allowing others access. But I understand it is a way for the community to protect itself after a long history of marginalization, struggle and fight for visibility. I’ve reached out to a lot of programs. The Mission Cultural Center for Latino Arts hosted one of our residences and performances, but it took a lot of meetings to convince them that I, a modern dancer, was a valid representative of the Latino community. It wasn’t until I finally showed them video samples of my work when they seemed to get that we are professional and, as they put it, “the real deal.”

Other groups I’ve tried to work with are the Coro Hispano de San Francisco and the San Francisco Women’s Building, but it’s been very difficult. I’m also still working to be recognized by a Spanish newspaper or publication, which has not happened yet.

A main thing that inspires me to keep pushing is my experience in my second job in the restaurant industry. A handful of coworkers, most of whom are Latino and work as cooks and bussers, have come to my shows, and they always walk out thankful and impressed, telling me they recognized themselves and their families in the show. That’s what makes me say “YES!”

I just offered my local taqueria staff free tickets, and that’s the kind of outreach I’ll keep doing. I want people to see that the arts can be an avenue for change and social justice. People will turn around and support the work if they feel connected to it. Funding is based on personal connection.

If we allow the Donald Trumps of the world to say racist things and try to deport anyone who is different or brown, if we allow the fences and walls to go up, we are doing a huge disservice to ourselves as a people and as a country. The relationships between races hold our country together. If that breaks apart, the whole house will crumble. 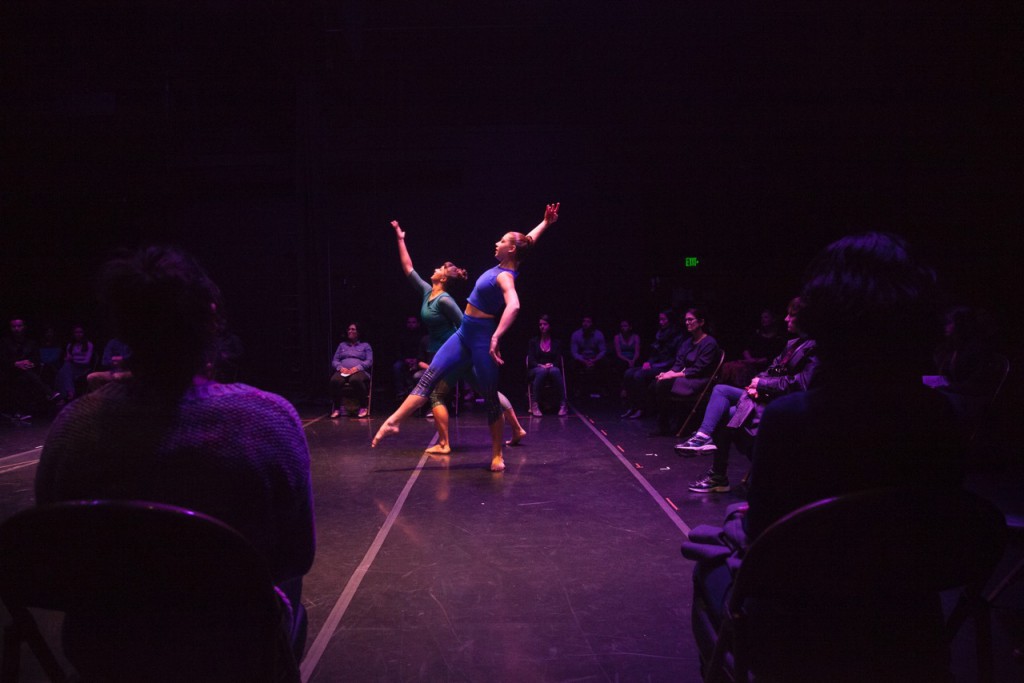 The Least of Them, by the David Herrera Performance Company, runs May 12-14, 2016, at Z-Space in San Francisco. To purchase tickets, click here.

Stance on Dance is a 501c3 nonprofit.