This past summer, Adam McKinney and Daniel Banks of DNAWORKS spent two weeks exploring the concept of borders, specifically the Mexican-American border, through dance in El Paso, TX and Ciudad Juárez. I sat down with them to learn more information about the project, their working methods, and their guiding philosophies. 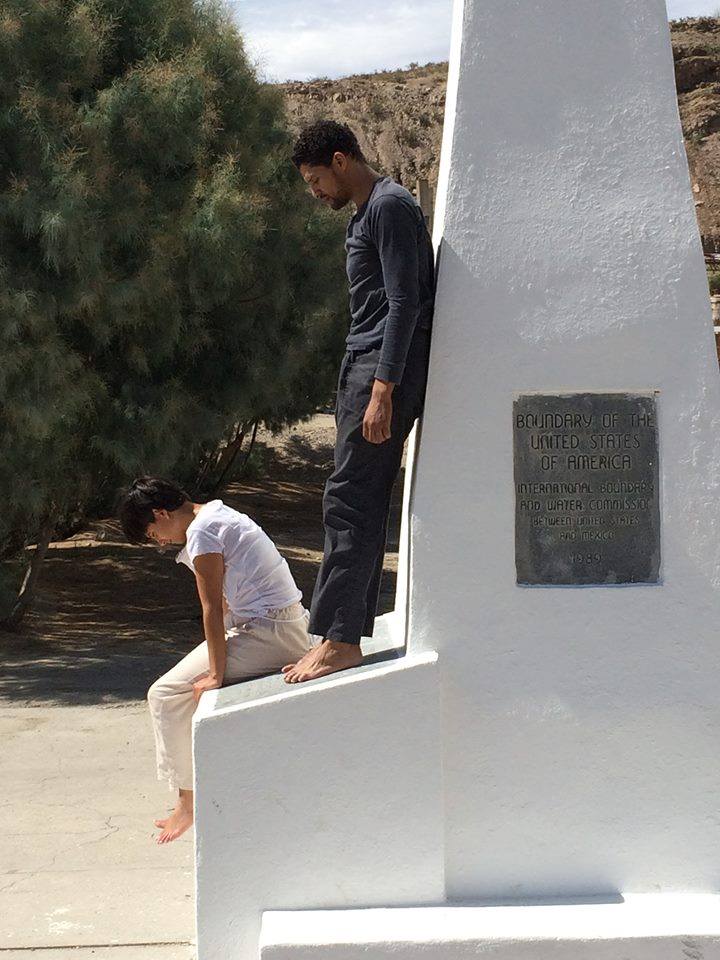 How did “The Borders Project” come about?

Adam: “The Borders Project” looks at liminal, or in-between, places. Our mission at DNAWORKS is to bring people together and get people in conversation with each other who normally would not be. Art is the vehicle for these conversations.

We started this work when we were in Palestine and Israel in 2009, working with Palestinian and Israeli communities through dance and theater. We also led “The Border Project Residency” at Centrum Center for the Arts in Port Townsend, Washington, where we invited a photographer, a videographer, two dancers, a writer, a director and a community activist to come together to create work about the effects of borders.

Daniel and I moved to New Mexico six years ago. Since we live relatively close to the United States/Mexico border, we wanted to expand our work about borders to there. I received the National Artist Teacher Fellowship through the Boston Arts Academy in 2015, and through the grant, Daniel and I created a two week residency from July 11th to the 25th. We stayed in El Paso and crossed the border into Mexico a good five or six times to both work with community-based organizations and the U.S. Consulate.

Daniel: Our first day, the U.S Consulate in Juárez invited us to a conversation with their youth leadership council. They asked us questions, we asked them questions, and we got to know a little more about their experiences. It was a really great way to learn about the social landscape, what people are thinking, what actions they’re taking, and the implications. There are a lot of different narratives surrounding the violence in Ciudad Juárez. In 2008, it was reported as being the most violent city in the world. We got to hear the opinions of young people and the impact the violence has had on their lives.

Adam: The U.S. Consulate also invited us to attend two round-table discussions, one with NGOs and the other with arts-based organizations specifically working with youth in theater and dance in response to the violence and its aftermath. Connecting our respective organizations fostered relationships and hopefully future work.

What were some highlights from the two weeks you were there?

Adam: I led several free dance classes at University of Texas – El Paso (UTEP) and the El Paso Conservatory of Dance. I also taught a class for a ballet company in Juárez and led some repertoire rehearsals.

Together with Sandra Paola López, a dancer who is on faculty at UTEP and who was our on-the-ground organizer, we led improvisational dances at various border sites. In essence, the audience members were whoever was around. On our first border dance site, we had some border patrol guards watching us. After a time, they called us over and asked what we were doing and why. We explained the project, and they found it both interesting and engaging.

Adam: I talk a lot about the intangibility of borders, specifically when it comes to race, class and gender. Where are those places in our lives where we’ve been kept apart based on our identities or the ways in which other people identify us? There’s a lot of fear about Mexico and the impact of immigration on the U.S. economy.

We were there when Donald Trump was visiting another Texas/Mexico border location (not where we were). As it sometimes happens, I was questioning my own legitimacy as an artist. I think we all struggle with: is this work good? Or is this work relevant? Him there at the same time reassured my commitment to the work. 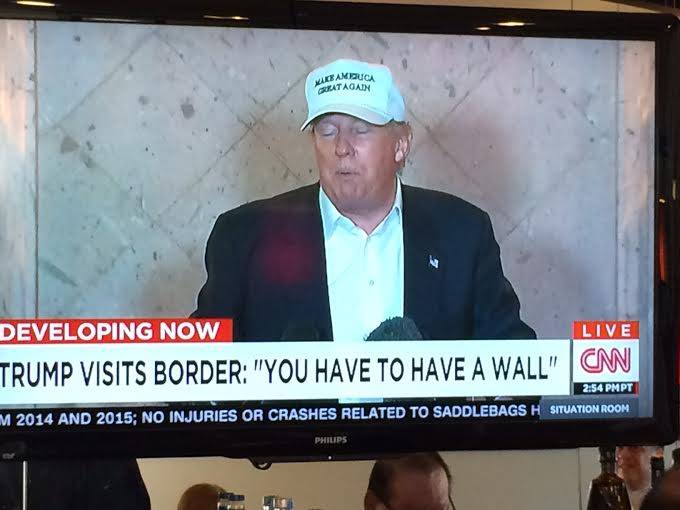 At the National Artist Teacher Fellowship convening, I received the question: did you have to ask to do this work, given that the space is so political? We never did – we just connected with local artists and leaders and learned from them. We did, however, do homework and research.  We didn’t just parachute in. The dances had scores, but were otherwise improvised. For example, in the “Hug Zone,” we played with the concepts of closeness and embrace.

Is this project part of a larger plan?

Adam: Our vision is to go to borders around the world that are fraught and have a particular history of otherness. We want to use dance and the arts to bring awareness to place, and to create connections and relationships.

Is there a barometer to measure success in a project like this?

Daniel: We didn’t go in attempting to measure success because we didn’t know what that would look like. This was more about dipping our toe in the water to see if it would be a fruitful place for future engagement. And I think we discovered that’s a resounding yes. Curiously, now we could construct a rubric showing it was successful, but that really wasn’t the point.

We listen a lot. And then whatever bubbles up from people’s own desire is what the project looks like.

It’s also about us having the faith that when a question is asked and people really listen for the answer, something will happen. Our way of doing this work is to say as little as possible, and to not get nervous if people don’t talk all at once. Just continue to listen. Eventually, a story unfolds.

We also have a different relationship to the question of success because DNAWORKS  is not a non-profit; it’s an LLC with a fiscal sponsor. We don’t spend a lot of time applying for grants. When we did that, we found we had to create programming to get the grant. We didn’t find grants for the kinds of programs we wanted to do, so we had to start creating new programs. We ended up doing things that weren’t our original intention. That whole assessment-driving-the-work question is important, but we’ve chosen to have a different relationship to it.

We did have a final showing though. As the first week was progressing and we were meeting incredible artists, Adam and I had a conversation, and we agreed to ask our collaborators to show their work and to invite one or two of their closest collaborators to show work as well. We didn’t want to be the outsider experts coming in and showing only our work; we showed a small piece of our work, but it wasn’t the emphasis. People came from both Ju  and El Paso from different backgrounds. We had between 75 and 100 people in the room sharing the most incredible stories about the internal and emotional borders that had been created because of the external border.

How did you navigate your personal border of being an outsider in the community?

Daniel: I think it has to do with how we were there and what our expectations were. We didn’t go in and shove a microphone in people’s faces. We allowed the universe to move us around, finding ourselves at a table with a conversation unfolding.

If you go in with proactive intentions, you may find you’re walking into a cultural minefield. Geography has culture, ethnicity has culture, and gender has culture. If we were funded by grants and foundations, it might be harder to justify not having an agenda, but we really didn’t have an agenda. We went to learn. 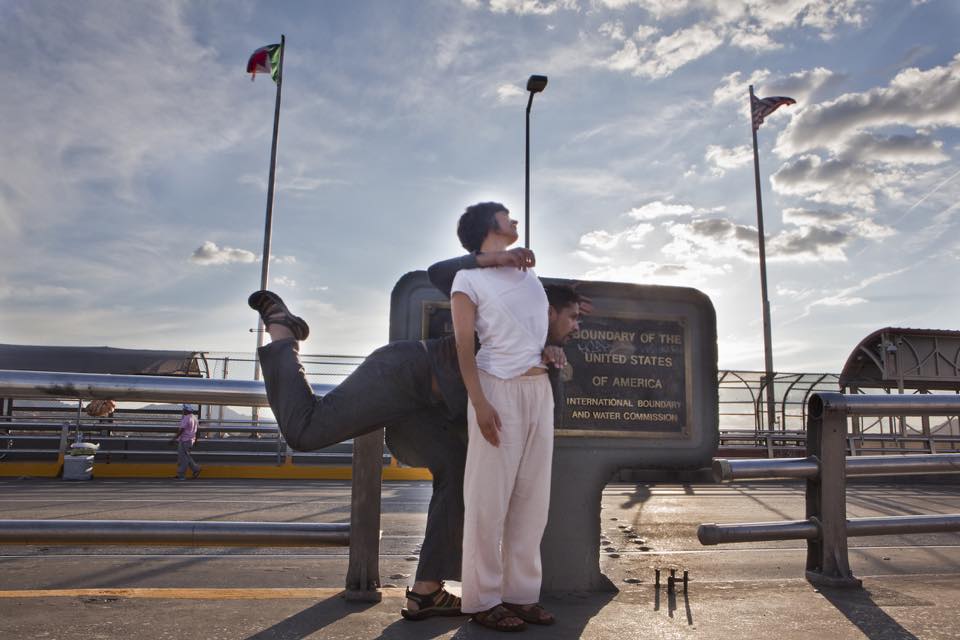 Daniel Banks, Ph.D., is a theatre director, choreographer, educator and dialogue facilitator. He has worked extensively in the U.S. and abroad. He is Chair of Performing Arts at the Institute of American Indian Arts. He is Associate Director of Theatre without Borders, and a founding member of the Acting Together project in the Program for Peacebuilding and the Arts at Brandeis University.

Adam McKinney is a classically trained dancer and former member of the Alvin Ailey American Dance Theater, Béjart Ballet Lausanne, and Alonzo King LINES Ballet. Adam holds an M.A. in Dance Studies with concentrations in Race and Trauma theories.  He is currently Chair of the Dance Department at New Mexico School for the Arts in Santa Fe.