As a dancer in the Bay Area, I’ve found myself lately shying away from writing critical responses to local dance performances. I assumed writing about the work of people I encounter on a regular basis within the dance community would violate some professional boundary between the personal and the political.

However, the more art I experience the more I realize that the personal and the political are continuously converging. The personal is the political. There’s no need to wait around for a designated dance critic—who may or may not write a review—to start a necessary conversation. As artists, writers and active community members, we can take responsibility at any time for shaping our own dialogue.

Kerr’s newest work beast is a perfect example of the ambiguous line between the personal and the political. By marketing her company as “anti-pretty” and titling her newest work beast, Kerr gives herself and her audience the freedom to reject conventional notions of what dance ought to look like. In that freedom Kerr is able to generate an intimate experience for her audience.

Encompassing quite literally a beastly mixture of movement vocabulary—ranging from the languidly ethereal to the aggressively angular—beast traces a vignette-like trajectory that opens on a dimly lit Megan Wright grunting upon a dirt pile and moves through a series of intimate duets, wild solos and emotionally raw group sections.

Throughout this journey, Kerr’s highly physical movement—marked by intense gestures and sensation-based partnering—never exists as an abstraction. Kerr’s raw, often jagged movement continually calls to question notions of beauty and form. Kerr does not simply reject pretty dance with the insertion of intentionally harsh movement but rather deconstructs the notion of beauty by questioning the ways in which women (and dancers in general) are perceived and oftentimes objectified through the illusory lens of an appealing aesthetic.

In one section the majority of the women partake in a group dance to Donnie & Joe Emerson’s nostalgic song “Baby”. The women shimmy their asses, thrust their pelvises, grand battement their legs and weave through each other in a perfectly calculated, sexually silly, dancey dance.

While utilizing highly sexual gestures (in the end the women are on their knees, asses up, bobbing their heads back and forth) the dancer’s casual almost comically whimsical approach to their movement detaches them from the sexuality inherent in the gestures. This detachment transforms the dancers from emotionally complex women into moving objects and in doing so reveals to us the way in which being somebody’s “Baby” can too involve being somebody’s object. Kerr takes this concept further by having her dancers shift suddenly from highly sexualized gestures to cliché classical ballet forms. The women sway, subtly shift their weight, grab their tits and then hit perfect balletic 5th positions. By placing ballet inside the context of female sexual objectification Kerr points to the sexual and voyeuristic nature of an art form obsessed with how something looks.

Kerr utilizes highly sexualized gestures throughout beast. We see pelvis thrusts, continual crotch grabs and hand representations of penetration. At times, the repetition feels crude and oversimplified. Yet in embracing extreme crudeness Kerr manages to re-appropriate it. Kerr’s relentlessness with her sexual motif transforms what initially seems heavy handed into a message of frantic urgency. She says it again and again, so we listen. Repetitive crudeness also becomes a means of reaching a variety of specific emotional states. Often repetition is used as a means of driving something to the point of its own implosion. A repeating image or gesture deconstructs into a new extreme.

The dancers—Alex Carrington, Chris DeVita, Stephen DiBiase, Michelle Galbraith, Robyn Gerbaz, Bree Nasby, Linda Steele II and Megan Wright—go to the extremes Kerr sets out for them with an openness and willingness that allows them to arrive at movingly raw and vulnerable places. Their constant energetic presence in the work allows them to manifest a wide range of complex emotions and movement behaviors. Through the dancers, we, as an audience, experience gritty disgust, comical sexuality, painful hope and beautiful tragedy.

While the two men in the company provide a very important balance and grounding to the piece, beast seems to center itself around the female condition. I’m sure my identification as a woman colors my perception of the work. Yet still, it is the women that seem to be battling the most intense internal conflicts. The floating feminine skirts that the women wear as costumed by Adam Rigg differentiate the females from the males in a very finite way and in doing so define what it is to be female in the context of the performance.

I find it interesting that after all the beastly movement the skirts remain. Likewise, while slightly scattered across the stage, the pile of dirt remains in its initial corner. beast toes the line between chaos and order. In the end, after a hauntingly powerful duet between DeVita and Carrington, it’s unclear where the role of the feminine remains. The piece closes with Carrington still wrestling a beast—or rather a notion of femininity that doesn’t quite fit. Kerr presents us with unresolved tension, crude repetition and aggressive gestures. While difficult to digest at times, it is precisely this crudeness that demands a visceral response. From there we can begin to question the ways we perceive moving bodies.

For me the goal of art should not be to simply please the most people but rather to trigger a thought provoking emotionally messy response. In that sense beast excels. 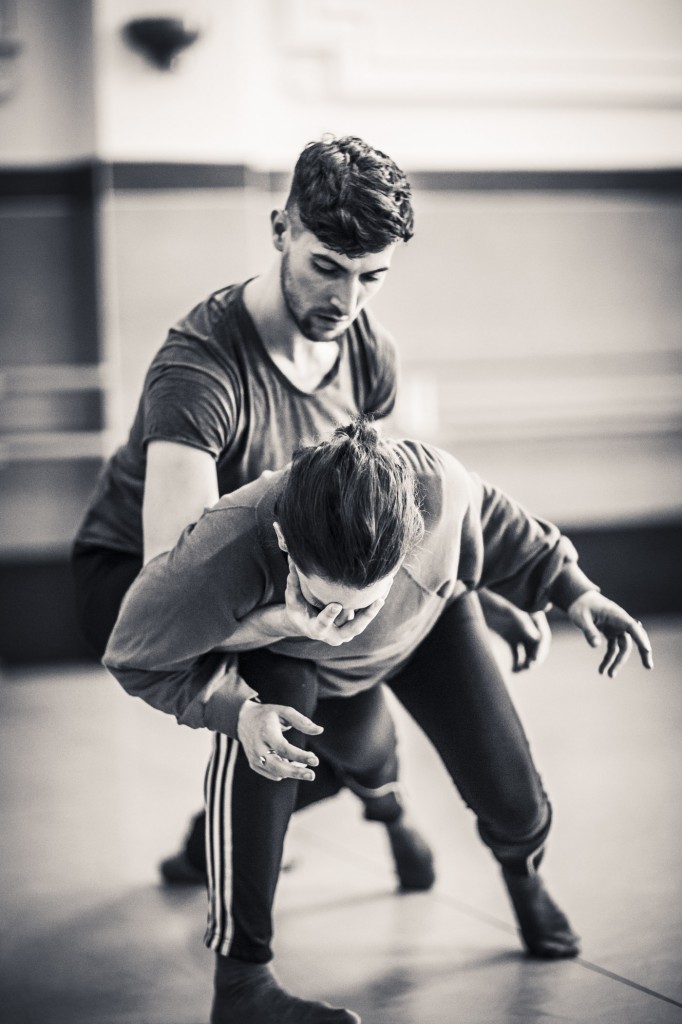 Katie Gaydos is a dancer and writer based in San Francisco. Since graduating from UC Berkeley she has danced with Yannis Adoniou’s KUNST-STOFF Dance Company and most recently with Robert Moses’ Kin Dance Company. She has contributed dance articles to The Daily Californian, The San Francisco Bay Guardian, In Dance and Stance on Dance.

One Response to “The Art of being a Woman/Beast”