When I was finding my way, as we do when we are young, I don’t remember holding a concept of what it meant to make it. I didn’t look into my future. In my grade school years, I attended the Alvin Ailey Dance School when it was still in a tenement building on the Eastside of Manhattan near the Tramway. I loved to dance and perform Shakespeare at that time but never thought of what I would do when I grew up. I left Ailey when I was accepted into the Performing Arts High School and changed my major to theater. My mother, however, was clear about not wanting to see me play a slave on TV like Cicely Tyson. And, Diana Ross was beautiful, could sing, and that was why she was in the movies. So I best think of something to fall back on instead of an acting career.

At one point, I referred to myself as being on the bottom of the totem pole because I was Black, a woman, and an artist. I didn’t know what making it would look like for me. I didn’t even know I was a working-class actor until I was in my 40s and a student getting my BFA in Theater. One of my instructors, Mr. Jon Jory, formerly of the Actors Theatre of Louisville, gave a lecture on what it meant to be a working-class actor. I sat there and realized he was talking about me.

I had spent my whole life doing gigs of all kinds: Broadway show tours, a stand-in on movie sets, roles in devised, contemporary, and Shakespearean plays, a museum puppeteer. I just kept performing, teaching theater-related arts, and learning all things theater. However, I did know that all that I did had to relate to who I was as a performer.

Then, I landed a super gig and became a fulltime performer on salary with a per diem. This looked like making it. But while in recovery from tour burnout I asked myself, how was that for you? And what are you going to do now? Do I burn out some more to get the next big gig? Or do I find a way to create some sustainability by creating my brand. Invest in me so that I don’t have to fit into someone else’s vision to be successful.

This way of thinking was the beginning of my making it mindset. In addition to learning from others while working to create their vision, I also have to create my own. The fallback, as my mother would call it, would be working outside of my creative visions. To manifest my ideas as projects that sustain me not only financially but, above all, creatively. This is what the making it mindset has come to mean to me; a self-sustaining creative livelihood that affords me the way to continue to share visions. 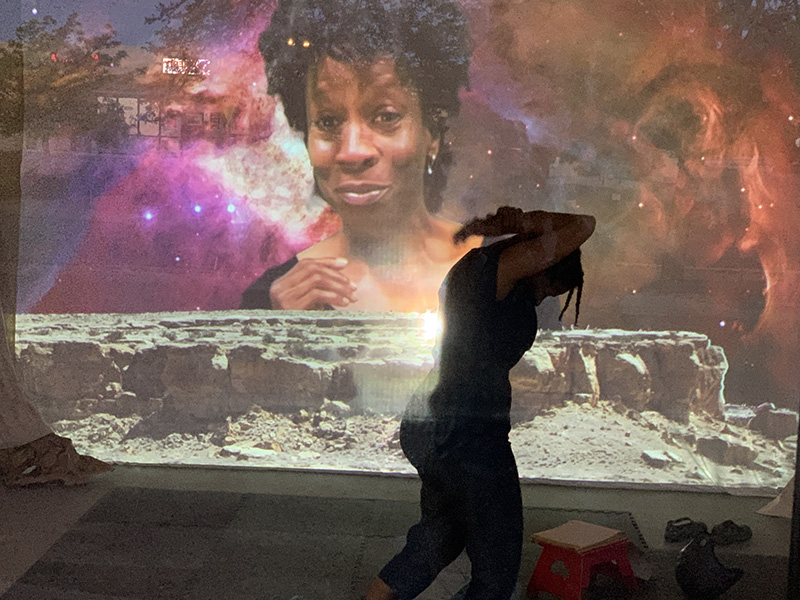 Photo by Ahjo K. Sipowicz; This is an unfiltered image taken from Danielle’s performance in an empty storefront window called “Passing: Alchemical Moments of Body Space & Time.” The image is of her as two separate personas.

Danielle Reddick landed in New Mexico after touring as a cast member of the International Broadway tour of STOMP. Before STOMP, she worked as an actor, solo performer, puppeteer, and percussionist. Danielle received her BFA in Theater at the Santa Fe University of Art and Design. During her time in Santa Fe, Danielle became a certified fitness instructor, clinical hypnotherapist, and trained in the Feldenkrais Method and the Nia Technique. After 10 years as a group fitness instructor, Danielle has developed a way of individualizing somatic training for actors that she calls SoHyp (pronounced so-hip). Danielle has been a professional actor on stage and screen and is a member of SAG/AFTRA. She is a long-standing company member of Theater Grottesco, and co-owner of RedQuyn Zoom Productions: creating original work and performance salons called The RedQuyn Experience. Find her social media on Linktree at linktr.ee/Dani_SoHyp.

3 Responses to “The Making It Mindset”