As part of this month’s series on dancers who facilitate their own dance practice outside a major institution, New York City based Marissa Brown shares the ups and downs of creating solos on herself.

Right now I mainly take class, usually ballet or gaga, and do a lot of yoga.

I used to have a personal improvisation practice when studio space was not an issue, but it’s a little more difficult to maintain in New York.

When I’m working on a project, I rehearsal at various studios in NYC about once or twice a week.

Lately I have been performing once every month or two.

Many of the shows have been showings of my own work, which include works in progress and shared bills in different presenting series, and some are for projects with other companies.

I also have a practice in dance video work, which includes shooting improvisations in various locations of myself or another dancer. I find that video work is a way to easily share the things I’ve been researching and working on in my personal practice, especially when I’m not performing.

My practice has been funded by the side work I do such as catering, dog-sitting, and various other part-time jobs I’ve had over the years.

I’m just now starting to enter the realm of applying for and receiving performance opportunities that offer stipends.

What are the benefits to working on your own (as opposed to working within a company or institution)?

I can be more productive working on my own.

I have more freedom to listen to my own thoughts, needs and questions.

I can create what feels most honest to me by really harnessing my own voice.

What are the drawbacks?

It can be difficult to always be motivated.

I don’t always know what I’m working toward.

I can only get so far with just myself. Eventually support and feedback from others is important.

What do you find are the hardest obstacles to overcome in making your own work?

Self-criticism… this can be difficult when creating a solo on myself.

Finding support from others, finding an audience.

I don’t find that making work is difficult – it’s finding ways to put it out there.

How do you personally measure success? When do you feel most successful?

I’m interested in how art exists to make one feel things, this conversation that can be created through performance that leaves us feeling human and un-alone. So I’ve felt successful when people have seen me dance or seen my work and communicated that they felt it was honest and found some type of real feeling or connection toward it.

I think a lot of time success is looked at as what society accepts as successful, such as working for a well-known company or making a lot of money. I find it hard not to fall into that trap of wanting others to understand that I’m doing something pretty great. I try to keep my own goals of success in my mind which include making work/dancing, spending time with loved ones, keeping healthy, being able to travel, and supporting myself comfortably. 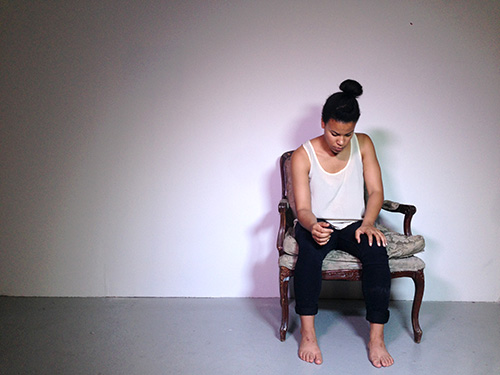 Marissa Brown is originally from the San Francisco Bay Area. She graduated from the University of California Irvine with a BFA in dance performance and choreography. Her work has been shown at various venues in Irvine and San Francisco, and she recently made her New York premiere as part of CURRENT SESSIONS, along with showing work in the fall with Movement Research and at Triskelion Arts in Brooklyn. For 2016, Marissa has been selected as a part of the Mare Nostrum Elements Emerging Choreographer Series, along with being selected for the Brooklyn Arts Exchange Upstart Festival. As a performer, she has had the pleasure of working with choreographers and companies such as Donald Mckayle, Benjamin Levy, Brice Mousset, Randy James, Sharp & Fine, and The People Movers.