For as long as I’ve danced (since I was five), I’ve wrestled with a feeling of invalidity when I tell people I’m a dancer. Now that I work fulltime as a writer, I feel even more so like I defend myself against being seen as a devoted hobbyist. I know this is an utterly stupid feeling, and wholly self-enforced. But there’s some sort of unspoken cultural validity that comes from working within the constructs of a well-known institution, and when you don’t have that institution, there’s a lot of explaining that necessarily comes with the simple statement, “I’m a dancer.”

After piecing together the manuscript for the Dancing Over 50 book, I’ve come to question whether that institutional construct is ever an accurate barometer of validity. Although many of the dancers I interviewed had danced in highly regarded companies, a good number hadn’t and, furthermore, even those who had danced in fulltime companies eventually found themselves at a place in their lives when they weren’t interested in auditioning for a conventional dance job, but indeed weren’t done dancing.

I think being a dancer has nothing to do with any badge of employment given by a major institution, but with the quiet work of cultivating a personal practice over the long run. It’s that act of still going through the motions when there is nothing obvious to be gained by it that reinforces one’s devotion to the art form. Granted, economic stability attained in the field of dance is a very rare gift, and certainly something to be proud of. But even in those cases, it never lasts forever, and it seems to me a very narrow definition of “dancer” to equate the title with a contract, especially considering the breadth and depth of dance in the course of human history.

So for the month of January, I’m including on Stance on Dance the voices of artists who are supporting their own dance craft from start to finish. They are their own generators. They produce and perform in their own work, and find ways to subsidize their art through a mixture of ingenuity and frugality.

For my part, I know this feeling of needing to validate my worth as a dancer is (a) stupid, and (b) undermines the validity of other dance artists whom I completely respect and admire but who happen to work outside the parameters of major institutions. So I’m going to get over it.

I’m a dancer. Often, I dance for myself. Other times, I might dance for a choreographer, but only if I respect the work. I pursue what interests me, and don’t pursue what doesn’t interest me. I have ample training and performance experiences from which to draw upon in making those decisions for myself. These days, I spend more money on my dance practice than I make from it. I’m totally fine with that for now. I don’t know what the future holds. It might bring institutional support, or it might not. It doesn’t alter my devotion to the art form. I dance because I can’t not and, since it’s a fairly relegated art form in mainstream media, and a particularly ephemeral art form on top of that, any success or failure I perceive is a little blip in the greater human history of people dancing. I’m honored to be a part of that blip.

For all of us who claim the title of “dancer,” may the motivation to keep the flame lit only waver as we deem necessary, but never because someone higher up gave us validity or, for that matter, took it away. 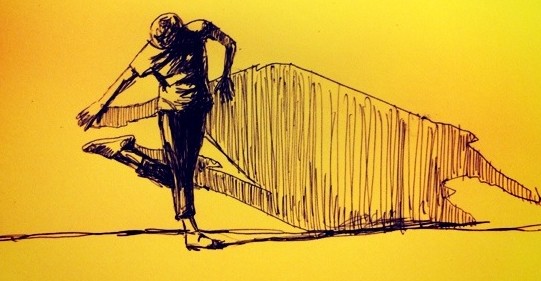 5 Responses to “Rethinking “I’m A Dancer””