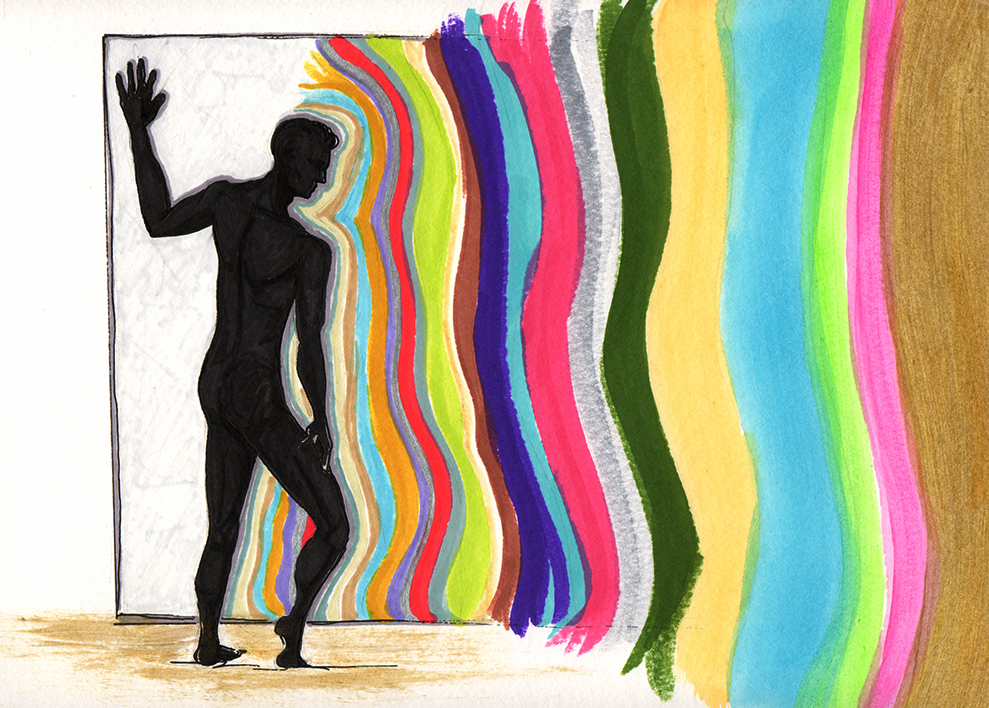 LB: How did you get started in dance?

I started singing in choir, and that led me to musical theater. So I had some rudimentary instruction in dance. I always loved the big dance numbers; even though I was awful at them, they were still so fun.

So when I got a postcard for an actual dance studio, I didn’t want to go, but my mother called and told them I was interested. I was 17.

I was always overweight as a child, to the point of doctors, diets, exercise routines and pills. I grew up with a lot of body image issues, and at 17 I was still struggling. A part of me looked at that dance postcard and thought, “I could never do that.”

That is why dance is a saving grace for me, because it was the one thing that allowed me to take control. My weight had been an all-consuming issue. I was always thinking about food, about my size, and its relationship to other people and activities I was doing, so I didn’t think I could dance, but my mother put her foot down. “I don’t care, I called and we’re going to go,” she said. I started with a jazz class and a lyrical class, and really enjoyed them.

By this age, I had figured out that I was gay, but I couldn’t tell anyone. Dance helped to be a bit of an escape. I could go to class, and even though I was still closeted, I felt I was in an accepting community. I went to a high school with only one openly gay student. It was hard not having any exposure to anyone like me. Dance opened that up for me.

I think I was able to jump in because the classes I started with were regular classes, not the high level competition classes, so it was a low pressure environment. I was with other kids in a similar level as me, so it wasn’t as serious, and I had two wonderful teachers who were the sweetest people.

However, that next year when I was 18 I joined the competition team, and there I had the least experience. The teacher would say, “Do a tendu,” and I had no idea what a tendu was. Dance quickly became my life; I was at the studio all of the time. I started to train seriously in ballet, and also started hip hop and tap.

I went to Northwestern University as a dance major. After the entrance exam, all the dance majors went to higher level classes except me. I was sent to level one, which was very humbling. But I knew I had to work it out.

LB: What was the reaction toward your dancing from your family and friends?

High school was a bizarre time for my family because my father took a job in southern California. My family was eventually moving to California too, but my parents wanted me to finish high school first. My father would commute across country, leaving at 6am on Monday to return at 6pm on Friday every week. My senior year of high school he wasn’t really around, so he wasn’t a part of that first year of dance.

Now he’s very supportive of my dancing. He always says, “Do what you love.” He works in a corporate environment, but he said, “If you really want to do this, do it now, because if you wait 10 years it won’t be any easier.” Getting that approval from him was really important.

LB: What stereotypes or conversations around being a male dancer have you run into?

When someone asks what I do, I’ve yet to say, “I’m a dancer” with a straight face. So my own reaction betrays me because I know there’ll be clarification needed. “Dancer” is such a broad term.

Some people just say, “Awesome!” and leave it at that. Some are educated about the arts and ask what form I do, though most immediately ask if I’m a ballet dancer. Then I have to say, “No, I do modern and contemporary.” The next connection they make is, “Like… ‘So You Think You Can Dance’?” and then I have to explain dance-theater, concert dance, etc.

LB: What conversations specific to being a male dancer have come up?

In high school, I often got told, “You should be playing football or basketball!” And I would say, “No, I’m a dancer…” That was often a moment of discord.

LB: Have there been male role models for you in dance?

Any guy I’ve trained with or take class with is an inspiration to me. I started so late, so I assume everybody started before me and is more informed. So I look up to them or learn from them, even if they are just next to me in class.

LB: If you had an opportunity to mentor another man who wanted to start dancing, what would you tell them?

I would tell them that it takes more than what is obvious. When I started dancing, I thought I had to be strong, flexible, jump high and do four turns in a row. That is a pretty shallow way to think about dance.

What it takes to really be a dancer is so much more: organization, responsibility, determination, drive, team-work, problem-solving, etc.

In the dance community, one thing you hear all the time is, “It’s so much easier to be a guy dancer!” It’s so difficult to get to a professional level, to sustain it, and to honor where you’re at. And then to share it. It’s a vulnerable profession if you let it be. None of that is easy – mentally, psychologically, physically.

So to hear that stereotype really bothers me. I get why it’s said, because of the numbers of men versus women in the field, supply and demand; it’s a simple economics problem. Yes, there are more opportunities for men. I do wish the field could be gender neutral, but choreographic visions usually require gender specificity. And if that is the case, a man may get a part and he may not be equal to his female counterparts in the audition.

But it is not easy to be a dancer. I only know that I’ve worked my butt off, and I still work hard every day.