Mike showed up at the deserted train tracks with a bright turquoise miniature stage. As the sun came up over the distant bridge, Mike was lit from behind, casting his silhouette with one arm extended toward the tracks and another toward the trees. His movement, however, transcended his reach, flowing outward and upward past the power lines into the blue-gray sky. 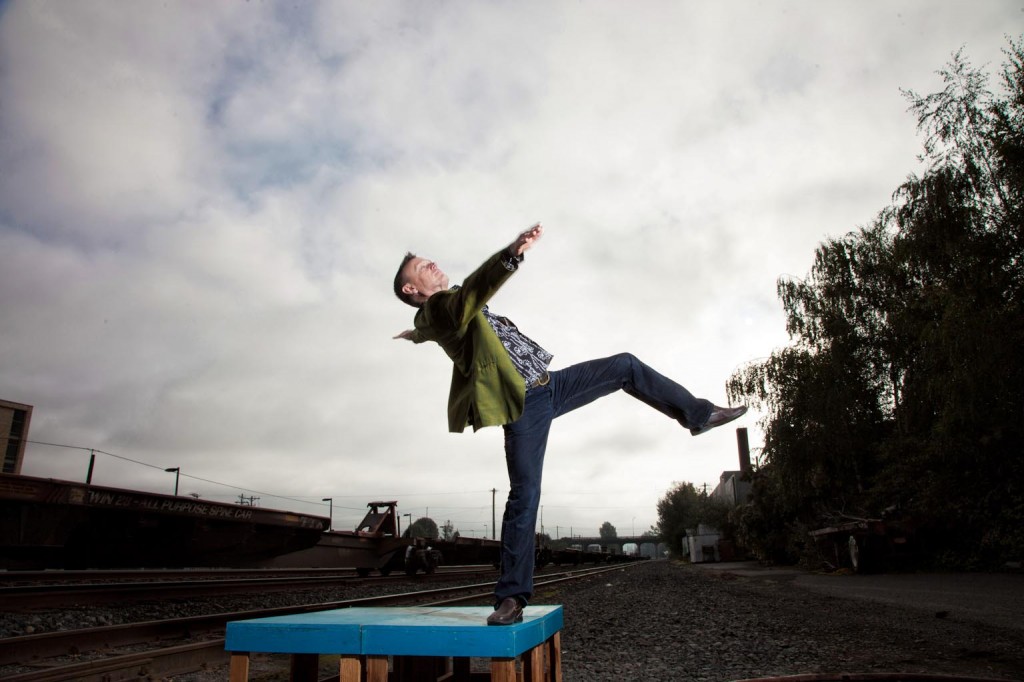 I won a twist contest at my grandmother’s guild in Chicago when I was in third grade. I was eight and the old ladies threw pennies at me. Something in me might have gotten hooked.

I took my first dance class in college and haven’t stopped since. It’s been about 40 years; I’m 57 now. I just retired from the Portland Public Schools. I was a special education teacher for 33 years. Dancing and teaching have been parallel careers that haven’t overlapped much, but have both been really great adventures.

I spent about 10 years at Dance Center Seattle, studying and working with Nancy Cranbourne and Wade Madsen. I didn’t want to feel as though I hadn’t made it as a dancer, so I quit teaching for a while to dance full-time. I worked with Pat Graney in Seattle and then was cast by Bill Irwin in his show Largely New York. I went with the show to Broadway and lived in New York for a couple of years. That was an important time for me, because it developed my use of humor and clowning, which involves a light and a dark side at the same time. Bill Irwin was such a master of that. 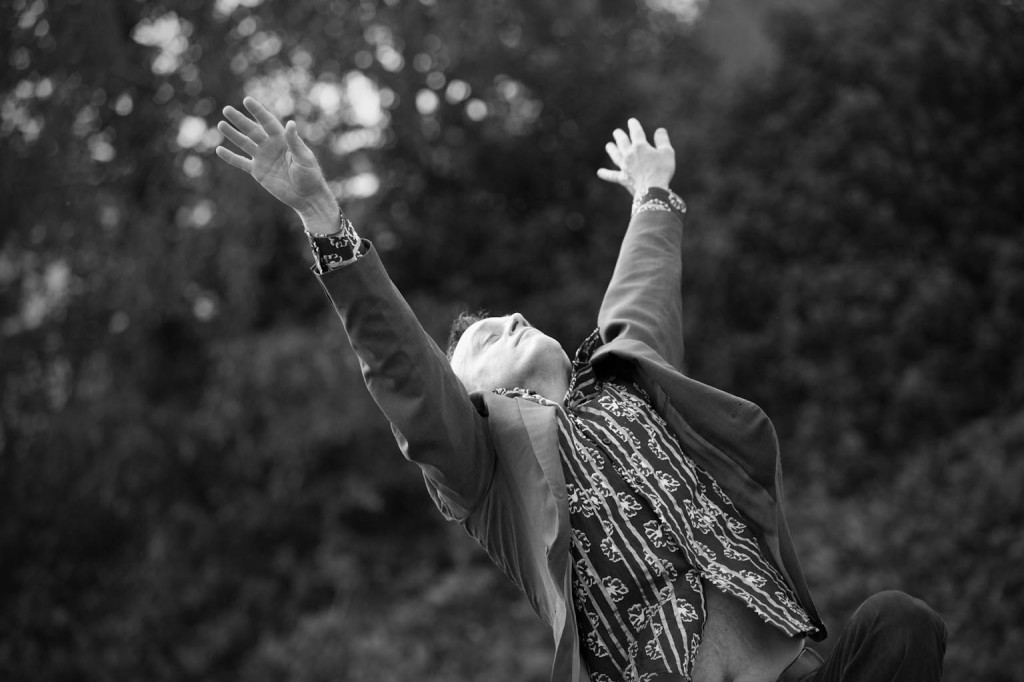 I didn’t dance for a few years, and then moved to Portland. I started dancing with Gregg Bielemeier and several other folks around town. I also did some theater, which has always been a part of my career as well. I started making my own work about 20 years ago.

Ten Tiny Dances,  which has been an ongoing project since 2002, started as an idea for a fundraiser. I was surprised by how well it went, and I’ve been stewarding it ever since. It’s been produced over 35 times in the past 12 years. Over 200 artists have taken part. Curating and producing have become part of my dance practice as well.

It’s intermittent now. I create my own work and dance for others. I’m currently dancing for Danielle Ross, a young talented choreographer. I am the oldest member in the group — there’s five of us, and three are 30 or younger. I’ve been really challenged by my role as an older dancer in the group. How do I hold that? What does that mean to me? 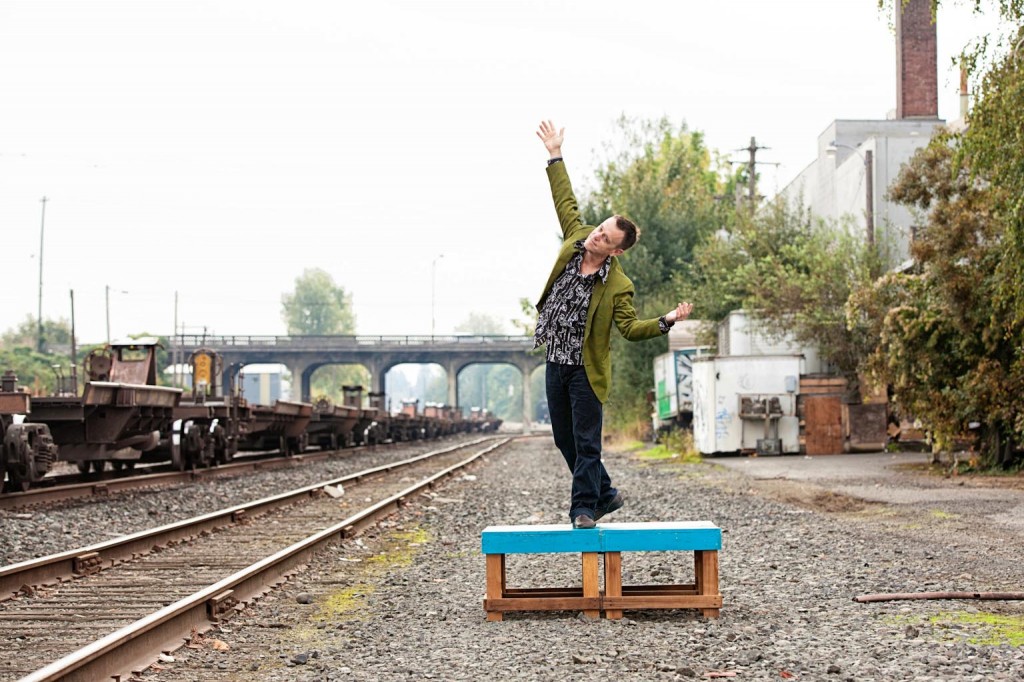 I’m also a runner; it’s what keeps me fit. And then I do projects as they come up. I usually perform in Ten Tiny Dances, which gets produced about twice a year.

Since recently retiring from the Portland Public School District, I’m excited by all this time in front of me and what I will find in my art life to do with that time.

How have the reasons changed for why you dance?

My first answer is that it feels the same as when I was eight years old dancing for my grandmother. I’ve always had this drive to dance, move and perform. That motor inside feels the same. What has changed is my experience and how I find meaning, or what kind of expression as a dancer I find meaningful. I worked with Deborah Hay about eight years ago, and that was pretty life-changing in terms of me meeting my older self and finding there is something meaningful now that wouldn’t have been earlier in my career. What I find meaningful and the kind of work I want to do has changed. 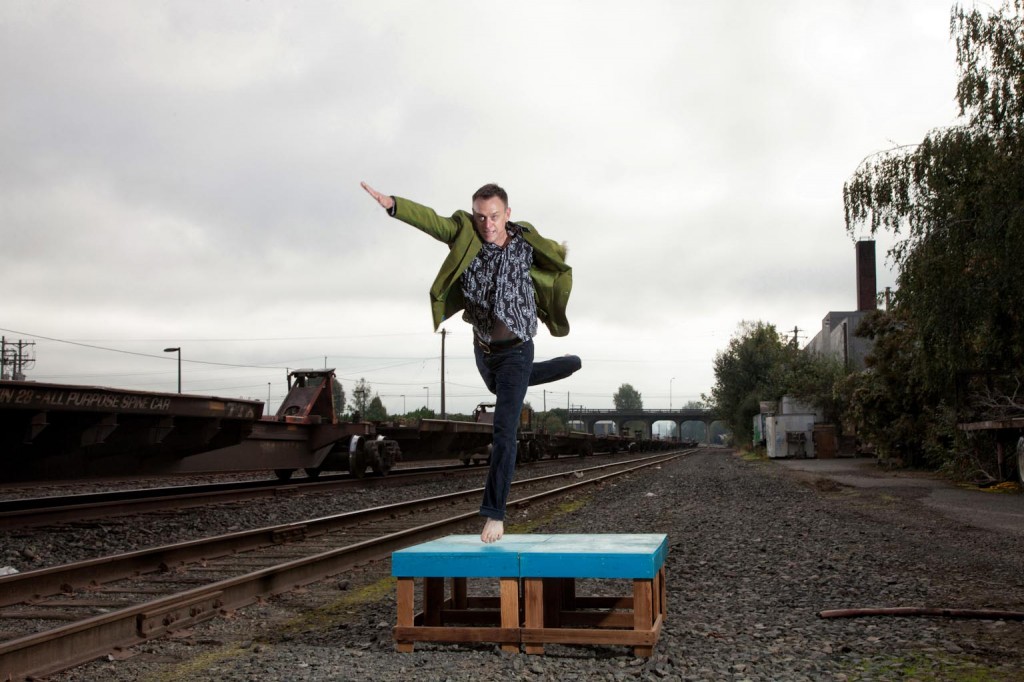 I was much more externally focused when I was younger, following what was expected. As I’ve gotten older, my sense of success comes from the depth of my creative process and my own experience of transformation, adventure, discovery and growth. Now, when I’ve had a successful performance, it’s a measure of how much I was able to embrace the challenge specific to that work, to give myself to it and to be altered by it.

It’s something I’ve been thinking about lately, particularly working in this piece with younger dancers. I feel honored, and treated differently. Every once in a while I’ll think, “Whoa, I have been dancing for 40 years and I’ve been a part of this community for a long time.” I’ve created something that’s really had an impact, and when people ask for my advice, criticism or reaction, I think that’s endemic to this time in my life.

As both a teacher and a dancer, I think my legacy may be my ability to not fit the mold, which feels great, because when I was young I really did fit the mold. As I look back on my career, I’m really happy with the last 20 years. 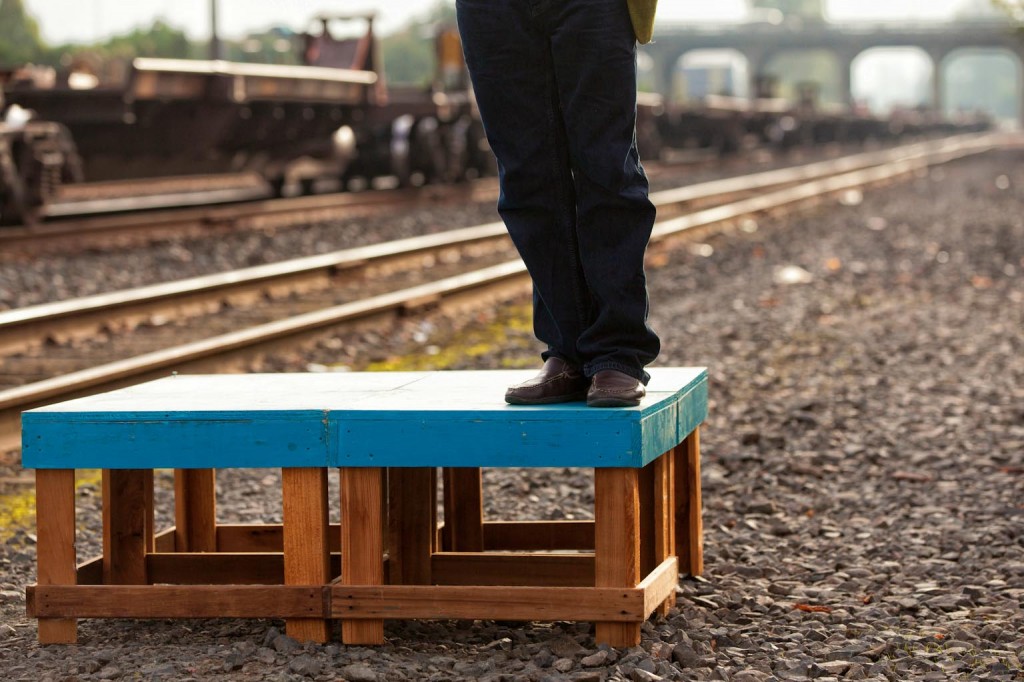 I look back on my 40 years of dancing and it’s such a beautiful adventure–so much change, so much texture, so much response to new opportunities. Looking back on my experiences and how I’ve grown and changed, why wouldn’t that continue? My body may be increasingly limited in what it can do, but I’ll still find ways to express myself through movement.

Find a mentor who’s going to kick your ass, which really means, find ways to learn, grow and get pushed out of your comfort zone. Find your potential. 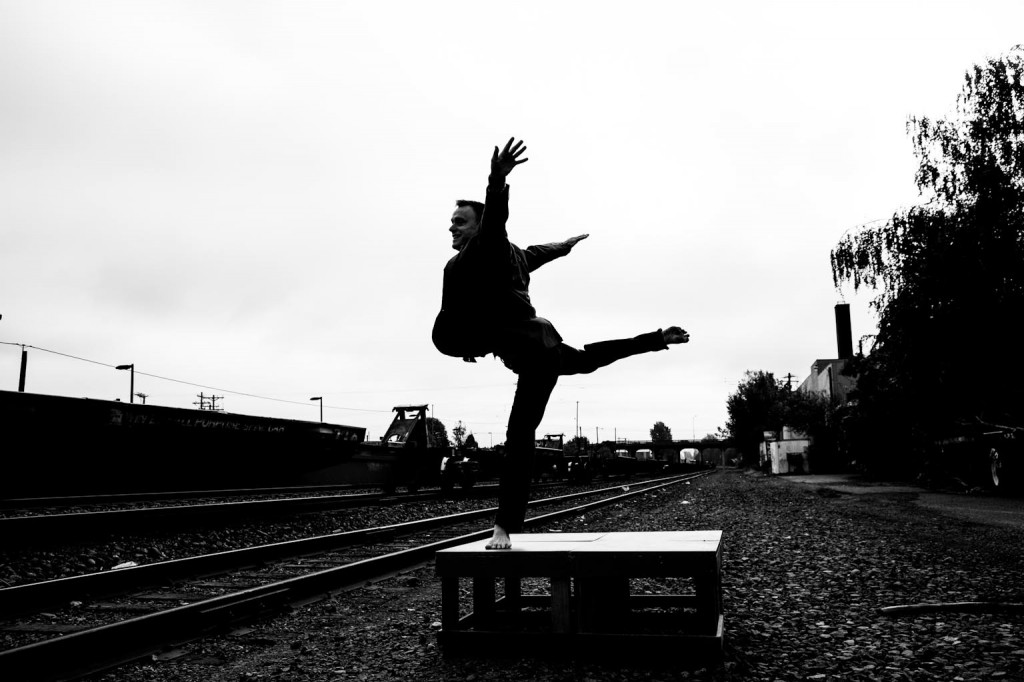 Regarding the tiny stage of Ten Tiny Dances, it started when I was doing my first full evening-length work and I needed to do a fundraiser. In putting together the fundraiser, I didn’t want to do what was expected. One of the reasons why Ten Tiny Dances has been so successful and why I love it is because it pulls people out of the expected. It’s on a 4 x 4 stage. For audiences and choreographers alike, it challenges what we do with space. It’s a unique format in which to see work. That’s deeply satisfying for me. When we’re pushed out of the expected and out of the norm, what do we discover? 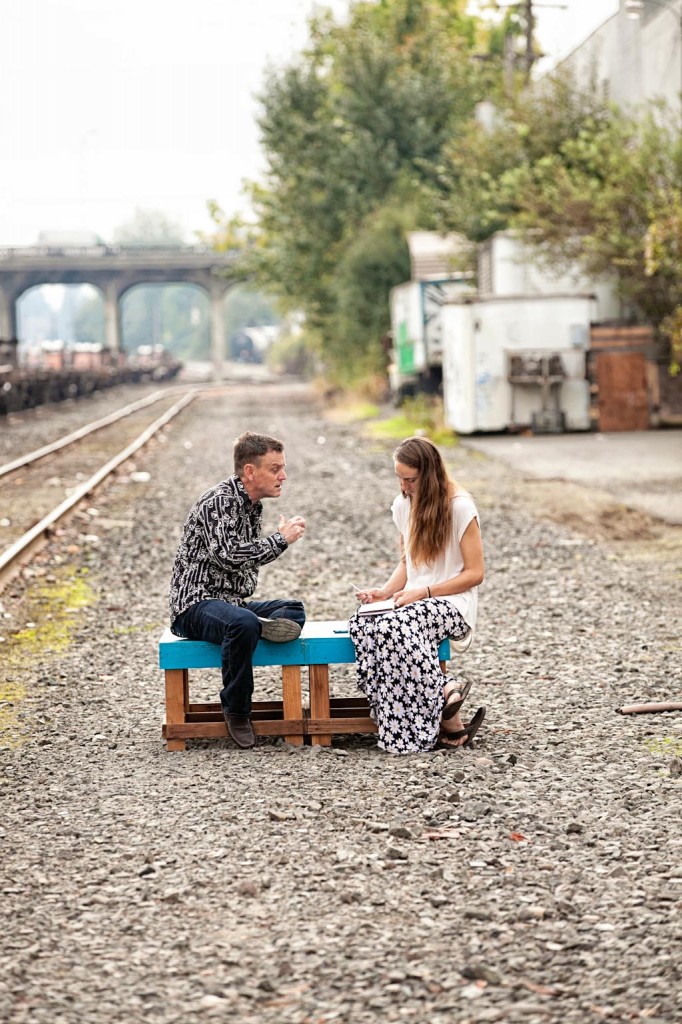 Mike Barber has performed as a dancer in Seattle, San Francisco, New York and Portland. He performed on Broadway in Bill Irwin’s Largely New York, was a member of the Pat Graney Company in Seattle, co-directed Portland’s aero/betty aerial dance theater, and has also danced with the Gregg Bielemeier Dance Project, Oslund + Co/Dance, and Minh Tran and Dancers. Since 2002, Mike has produced and appeared in 35 iterations of the performance series Ten Tiny Dances. He currently works with adolescents and artists as a psychotherapist in Portland.