As a performer, I am an interpreter of others’ visions and ideas. Most of the work I have performed within the Berlin contemporary dance scene is intensely collaborative and personal. Dancers are asked to contribute not only to movement generation but also by sharing our personal narrative and dramaturgical ideas. I love collaborating in this way. However, I had reached a point where I was constantly drained and felt mined of my creative resources. I knew it was no longer sustainable, and I needed to focus on feeding myself artistically without needing to create for someone else. In 2021, I received funding which allowed me to explore this personal research and chose to focus on movement exploration and generation through improvisation, outside the framework of creation for an audience.

In my training and in workshops, I had occasionally experienced an “ideal state” while improvising. However, I found it much more difficult to replicate when I was alone. While I feel confident I can enter a peak performance state for an actual performance and had honed this skill in my Towards Vivencia training, I wasn’t able to apply this consistently in improvisation. In the context of improvising, this is the state where I am allowing things to happen to me, where movement is generated from listening to the body and physical sensations, while I am simultaneously able to make conscious artistic choices and direct the movement. While in this generative flow state, I can observe and follow my body’s impulses without my mind taking over and judging or trying to create something “interesting” and worth watching. It is in this state where I feel most creative and connected with myself. This is where I wanted to research, as I knew it was here I had the most room to grow artistically.

During the course of my research stipend, I specifically focused on how mental, emotional, and physical states impact states of flow, and how I could use memory, imagery, and sensations to direct these states. Current neuroscience research tells us that states of flow occur when both our sympathetic (fight or flight) and parasympathetic (heal and digest) nervous systems are activated. In my research, I pulled from resources such as Levine’s “In an Unspoken Voice” and Suzuki’s “Healthy Brain, Happy Life” as well as countless other inspirations and reflections I had from previous classes and workshops, including but not limited to Malinda LaVelle, Christian Burns, and Sita Ostheimer, as well as Gaga and other somatic practices. I also applied the three phases of the Towards Vivencia Designing Presence Training methodology as a working format for my practice: entering-designing your experience, staying-inhabiting presence, exiting-integration towards a purpose.

Throughout my research in the dance studio, I experimented with different somatic techniques to enter states of flow including meditation, repetition, whirling, shaking, exhaustion, EFT tapping, and periods of deprivation from external input. While each of these induced an interesting and specific state, they were complete experiences in and of themselves and I felt there was a missing link to applying these experiences directly to movement research.

While I don’t believe there is any one “right” way or method to improvise, dance, or enter states of flow (or really anything else for that matter), I wanted to share some of the ideas and structures which were helpful for me throughout this process. 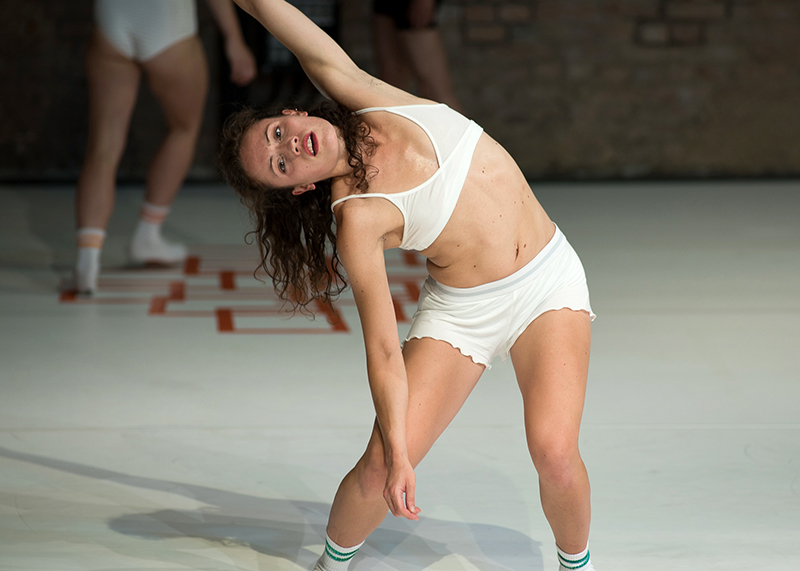 Ritualization: I practiced arriving in the space, the body, and the mind as I was, in that moment. This took many different forms. One example was walking the perimeter of the room and then in progressively smaller circles until I arrived in stillness. While doing this I focused my attention first on the space and then eventually connected to a grounding exercise of the senses (the 5-4-3-2-1 method for example.) Instead of simply preparing the body to move, it was important to take time to consciously acknowledge and connect to all parts of myself: my senses, my body, my emotional and mental state. I also created a conscious exiting and integration of the practice. This most often took the form of practicing a moment of stillness, reflecting on what I discovered, and making notes for future sessions. I knew this reflection was important in order to integrate my insights from these sessions and be able to apply them in my daily life and other work. By creating a clear pathway into and out of improvisation sessions, I became more aware and committed, as well as had a clearer purpose during the sessions.

Tuning: In this practice, the particular exercise mattered less than the intention and format. It was important that I focused on both activating my body while simultaneously releasing unnecessary tension and keeping my internal state calm. The purpose was to awaken and prepare the body but also maintain a sense of attention and focus. It was as much of a training for the brain as for the body.

In one version of this practice, I would systematically warm up each part of my body through improvisation, using as many exercises, imagery, sensations, and tasks as I found helpful. For example, I would practice a big toe grounding Toega exercise I learned from osteopath David Thunder during a Towards Vivencia workshop (more of his resources here.) During this exercise I listened to the way it engaged my toe and also the entire inner line of muscles in my legs. I would then continue improvising, striving to maintain this activation, before moving on to activating the rest of my foot.

I found that if I maintained one very broad task as a base, such as this systematic scanning which I would follow the entire time, it kept my mind from drifting into the questioning and evaluating state. Inevitably, each time in repeating this process a new inspiration would arise and I would allow my mind to follow my curiosity, finding new tasks for further research. I could dive into creative exploration, let excitement and momentum take over, and when the new curiosity had run its course it was easy to plug back into the original task. In this way, I accumulated new ideas and tasks for future research. This practice was important for setting the right mental and physical state for movement research but, most importantly, it served to train my creativity and curiosity by constantly searching for new interests or tasks to explore.

One of the areas I focused on in the tuning process was postural adjustments. This did not come from a place of fixing my alignment to have “ideal posture” but, rather, to balance states of tension. I found that deep and subtle adjustments to my spine, head, and face, their placement and the muscular tension surrounding them, made the largest difference in my felt state and therefore had an impact on the movement generated thereafter. This was inspired by Levine’s research on trauma and how it is expressed in the body:

“Behavior occurs on different levels of awareness, ranging from most conscious voluntary movements to the most unconscious involuntary patterns… behaviors that occur in the following subsystems: gestures, emotion and posture, as well as autonomic, visceral and archetypal… postures are the platforms from which intrinsic movement is initiated. In the words of A. E. Gisell, “the requisite motor equipment for behavior is established well in advance of the behavior itself.”

Through attention to my posture, I was able to observe my emotional state more clearly through its physical expression in the body, then also change that state by making physical adjustments and observing its effects.

At the San Francisco Conservatory of Dance, I regularly took Malinda LaVelle’s “Jam Class,” where we used memory and imagination to cultivate joy and express it physically. Inspired by this practice, I experimented with cultivating various emotions and feelings while allowing them to manifest physically. While the above practices were mostly about creating as Jorge Crecis says “the right container” and staying in an ideal state for improvisation and movement generation, I also experimented with directing these states. I was searching to find more nuance within states of flow. Instead of simply “in flow or not” or “good or bad,” I wanted to find contours of feeling and color: reflection, empowerment, excitement, melancholy, grief, etc.

Levine states that “One’s posture and facial muscles signal emotional states, not only to others, but to oneself as well.” Attempting to utilize this by using memories, imagination, and tailored music, I worked to create an emotion or feeling and thus a physical change in my movement. Then by listening to that physical feedback, I allowed the sensations to deepen this state. This felt like a constant feedback loop of conjuring memories, imagination, and felt senses that affect the body and its movement, then listening to those physical sensations and allowing them to further feed my memory, imagination, and felt sense. Sometimes these emotional states were categorical feelings (anger, sadness, fear, etc.) and sometimes they were what Eugene Gendlin called “felt senses,” something that is felt and cannot be defined but is rather sensed through embodied awareness. Some days, I used this practice as an attempt to change my emotional state and other days it was more about listening to what feeling was most present within me and allowing it to expand and develop physically. Joy was by far the easiest emotion to pursue, perhaps because it was one I constantly desired, and also one I had the most experience tapping into. This is by far the most difficult part of my research to articulate and it’s a practice I would like to continue pursuing and refining.

The time spent in the studio by myself was challenging and enriching and I know that my performance and teaching practice has benefited immensely. It became extremely clear how essential it is for me, as an artist, to have time to research movement, exhaust physical ideas and explore simply for the sake of exploring. Cultivating this type of practice has built artistic resilience, mental stamina, creative fortitude, and a more intimate relationship with myself. Regardless of what I chose to research, I know the biggest lesson I learned was actually the importance of doing it, of prioritizing my own creative process, especially as a performer who is not also a choreographer. What I really learned by experimenting with these different techniques was to create an environment where I felt safe, grounded, and supported so that I could take risks, be daring, and fail as much as I needed to. The most difficult yet most beneficial aspect of this was the effort to constantly feed my own creativity and learn to drive my own process.

This project was funded by Dachverband Tanz Deutschland’s program Dis-tanz-solo.