For me, the concept of “making it” is elusive and more subjective than objective. When I think of the feeling of “making it,” it is a star-aligning moment, often fleeting and brief, yet it is a glimpse of complete perfection, as much as perfection can exist. The image I have for “made it” (versus “making it”) is water being held in the hand. The water can rest there in appreciation and awe for a moment, but inevitably it will slip through and change form. “Making it” is an infinite and evolving experience and, in my opinion, preferred because it is a living process. The process of “making it” is hard and rewarding, and has given incredible value to my life.

Today, I am proudest of the work I continue to create with Dark Sky Aerial, a project I co-founded with Abby Chan, Elisa Venezia, Joanie Garcia and Isabelle Dove-Robison in 2014, steered in-part today by board president and company member Myra Popejoy. Dark Sky Aerial is an ambulatory and experiential aerial dance company. Work created is site-specific, providing the need for grit and dedication. The practice of using ambulation for the audience itself must require a specific expertise and adaptivity in order to craft an impactful audience experience. As such, there are few companies in the world that combine the diverse modality and performance composition exhibited by Dark Sky Aerial. 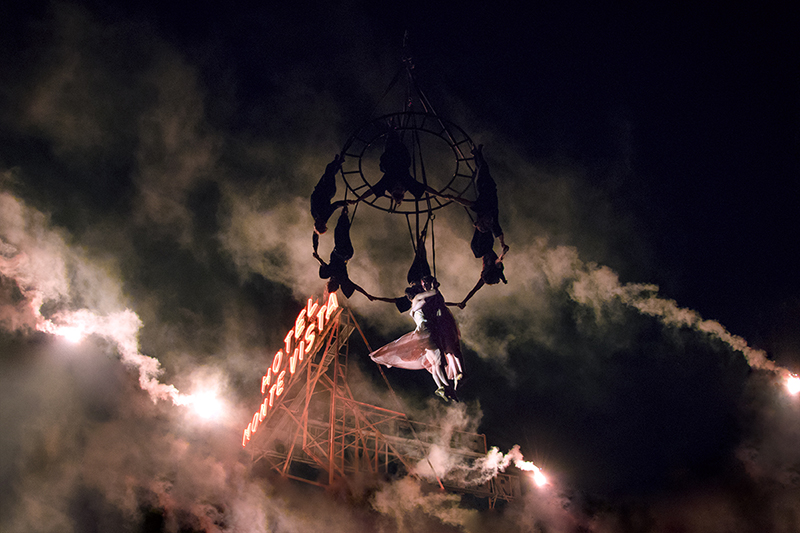 In my experience, focusing on “making it” versus having “made it” has allowed me to continue striving and fostering deep friendship in the process (the kind formed by sharing in a profound experience no one else has had). In the process of artistic creation and “making it,” I find I notice more detail and, in turn, become more of an active participant in life. For example and unrelated to dance, if I tried to draw a piece of fabric draped on the back of a chair, I would have to notice the light, the shadow, the color variation, the angle, the general experience of it. Creating artistic work – using the modality of dance – with Dark Sky Aerial is a similar experience. We have to understand and pay attention to the emotional implication of a gesture, a movement, etc. I think the work we put into “making it” can build a deeper understanding of empathy and human connection, because in a sense, the veil is lifted in dance and we have to be tuned in and tethered together, physically and emotionally, to create. We have to be comfortable witnessing struggle and being witnessed struggling. In a sense, we are “making it” as humans, becoming more empathetic and participatory in life using dance as the vehicle.

The innate challenge in “making it” and striving toward a goal has allowed me to develop a positive relationship with struggle. Now, I have a little anchor point in my memory reminding me that yes, I can work through a challenging movement and learn it regardless of the initial failure or the amount of time it might require of me. With Dark Sky Aerial, “making it” has turned a visionary dream into an evolving reality. “Making it” has proven that the experience of “struggle” can be approached with optimism, confidence, and hard work, rather than as an easy excuse to abandon a goal. For me, the lesson has transcended into my general approach to life.

After the last showing of TILT in 2018, produced by Dark Sky Aerial, I felt we made it. I remember standing in a circle on a rooftop, hugging and smiling under the pink and blue-hued stage lighting with creative director Elisa Venezia as well as Abby Chan, Isabelle Dove-Robinson, and Myra Popejoy and feeling a collective: “F*&# YES, we made it!” To produce TILT, we had worked hard to premiere a large-scale, complex production, deepened friendship, strengthened community, and we knew the artistic work we created made an emotional and real impact on the audience. 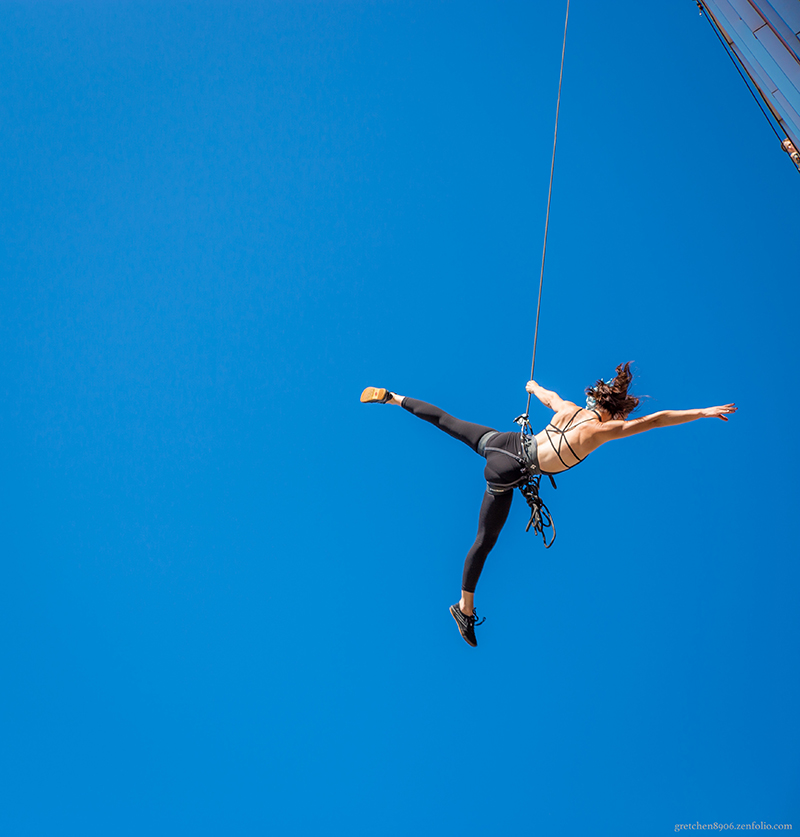 “Making it” for me, and for Dark Sky Aerial, is not based on fame. It is based on the ability to continue to create and suspend the audience – and cast/crew – in an emotional and life-changing experience. It is striving to speak to the complexity of the world and the intricacy of the human experience using the language of movement. For Dark Sky Aerial, if the work created an impact, inspired change, or an opportunity for authentic reflection for the viewer, then by our definition the work “made it.”

The COVID-19 pandemic crushed me. I stopped training, and the daily community in my studio vanished as much of the community in the San Francisco Bay Area was forced to exit an expensive city without performance work. Now, a year and half later, here I am “making it” again, returning to the studio to train with the support of my beloved teacher and friend, Liz Gehret (@abagfullofdirtandsilk), and the tight-knit movement community in Flagstaff, Arizona. It is very, very challenging, but the effort is worthwhile, as it has proven to be time and time again.

Despite my personal challenge in the COVID-19 pandemic, Dark Sky Aerial created OMEN, of which I am very proud! OMEN is an original dance film created and performed by Dark Sky Aerial and filmed and produced by Nick Geib of Firewatch Media and Blake McCord, Harlan Taney, and Justin Cliffton of Sandcast Media. The ambitious project was filmed on-location from March 30 to April 1, 2021 in the Grand Canyon. In tandem with the artistic dance film, OMEN, a documentary short, was produced by Nick Geib of Firewatch Media.

Today, I am focusing on “making it” again and taking time to feel the joy in the process. I am trying to reflect more often and soak in the “made it” a little more than I used to… even if my evolving definition of “made it” for the day might be doing one more repetition than I was able to yesterday.

From 1997 to 2007, Carrie Reynolds trained and competed in the USA Gymnastics Program and went on to expand her performance art through acrobatic gymnastics from 2007 to 2011. Carrie has coached for the Junior Olympic Gymnastics Training Program at Elite Gymnastics in Steamboat Springs, Colorado. Discovering aerial dance at the age of 23, Carrie began her training in Northern Arizona at Flagstaff Aerial Arts and Momentum Aerial Arts (@momentumaerialarts) where, in 2014, she co-founded two-time Viola Award-winning aerial theatre company and 501(c)3 nonprofit, Dark Sky Aerial. Specializing in harness dance, aerial fabric, and aerial rope, Carrie has performed in airplane hangars, historic hotels, on the exterior walls of industrial buildings, in traditional performance spaces, and suspended from construction cranes. Throughout her time as an aerial dancer, Carrie has completed approximately 11 months of residency at the New England Center for Circus Arts and a three-month artist residency program at Central del Circ in Barcelona, Spain, as well as trained extensively in the San Francisco Bay Area. Her most notable performances include original work for Google, Athleta, The De Young Museum, The Yerba Buena Center for the Arts, Burning Man, Dance Mission Theatre, and the work she is proudest of – created by Dark Sky Aerial: OPIA ‘16, TILT ‘17, TILT ‘18, and OMEN ‘21. Follow Carrie and Dark Sky Aerial at www.darkskyaerial.com or @darksky_aerial.