Kelcie Laube is a dancer with cerebral palsy from Elmira, Oregon. She has trained in dance since childhood and has performed in two companies. She has been dancing professionally with Joint Forces Dance Company (the performance company of DanceAbility) in Eugene, Oregon since 2015 and debuted her first self-choreographed solo in 2017. Kelcie volunteered as a teacher’s assistant in DanceAbility classes for two years, and has since completed the month-long teacher certification of the DanceAbility method. She is also a Horse Management major at Linn-Benton Community College.

This interview was conducted with the help of Jana Meszaros. 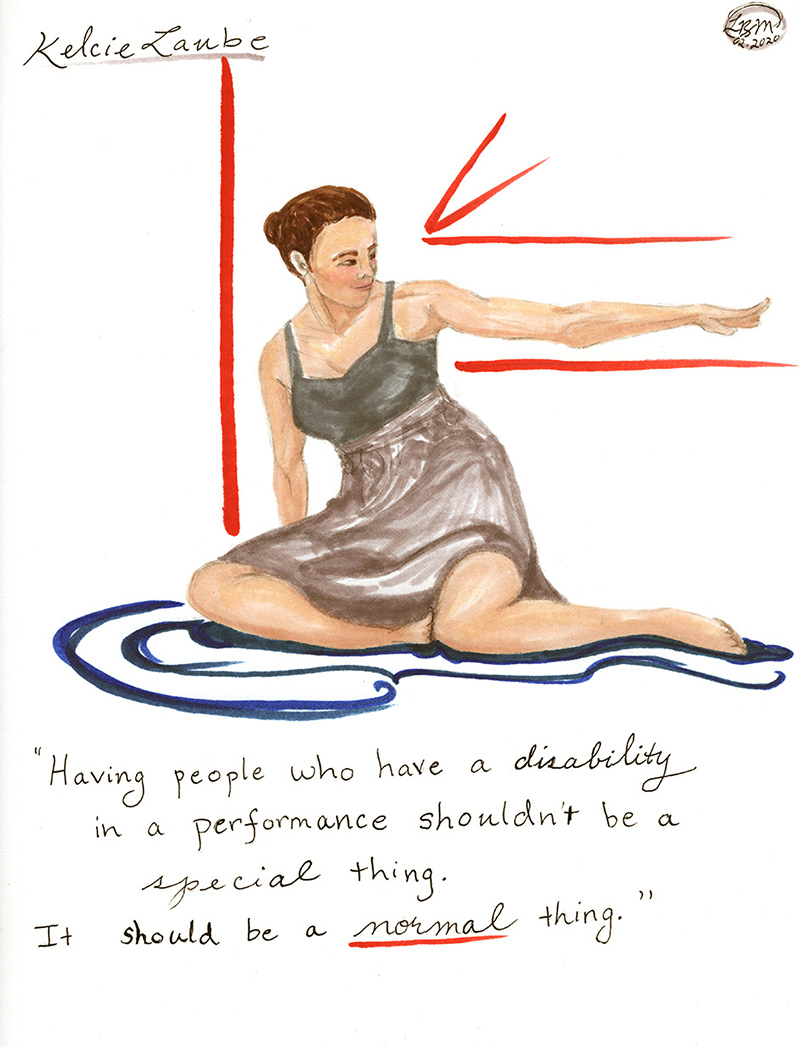 Image description: Kelcie is depicted sitting on the ground with her knees bent in front of her to her left. Her left arm is extended over her legs and she is looking over her arm. Her right arm is on the floor supporting her. She is wearing a gray dress and sitting among swirling lines of blue energy while sharp lines of red energy frame her body. Underneath her reads the quote, “Having people who have a disability in a performance shouldn’t be a special thing. It should be a normal thing.”

I grew up in a small town right outside of Eugene, Oregon, called Elmira. I started dancing when I was three because my two older sisters danced. Later, it became a family thing; my brother also started dancing. I took classes for many years in almost every style except for hip hop. I met Alito Alessi [the artistic director and co-founder of DanceAbility] when I was six years old at a United Cerebral Palsy workshop in Portland, Oregon. Though we only met like twice again in between when I was six and 16, I was a huge fan of his company, Joint Forces Dance Company, and went to every local community performance.

In 2014, DanceAbility started offering community classes every week in Eugene. I jumped right in at that opportunity. Alito was interested in how I move because I have a better range of movement than most people with cerebral palsy due to my dance training.

The following year after I started the DanceAbility classes, he invited me to do a performance with DanceAbility’s performance company, Joint Forces Dance Company. After our first show, he invited me to join the company. There have been a lot of highlights. A couple years ago, we were involved in a collaboration with the Oregon Bach Festival and we also dance at the Oregon Shakespeare Festival every year.

Jana: The Bach Festival show was a cast of 12 dancers with and without disabilities. We danced with the Oregon Bach Festival orchestra and chorus onstage with us for an evening-length piece.

Before the pandemic, I danced in the summers at least two times a week at a rehearsal or class. It was mostly ballet and modern, and sometimes DanceAbility classes. During the school year, I generally have taken three or four days of classes a week at my home studio, Junction City School of Dance, where I’ve been going for about 10 years. Then the DanceAbility rehearsal schedule is generally two two-hour rehearsals a week. I finished the DanceAbility Teacher Certification in 2019. I don’t really have any outside practice beyond that except at home when I dance around.

Jana: Kelcie has told me that she has to have a rest or stillness practice when the performance season is kicked into gear so that she has the endurance to do the rehearsals. It’s her version of cross-training.

Yeah, so when it’s busy I make time to chill out. When we have a performance coming up, we’ll rehearse just about every day leading up to a performance.

It depends on the person, but I get all kinds of things like, “Oh wow, cool,” and, “That’s amazing.” Sometimes I’m not sure they are taking me seriously and really believe I dance. It can sound like a positive remark but actually be condescending.

My dad tells everyone that I’m a professional dancer, and people say, “Oh, cool.” Then my dad adds that they pay me, and then people realize it’s a serious job.

Jana: Kelcie and I have travelled a lot together and often perform in duets. A great majority of the time after the show when we’re meeting with people, the attention is widely on her telling her she did a great job. Almost no one comes up to me. When people do come up to me, they tell me I’m doing a good job with her. We get this attitude of thinking the piece is about the disability and not an equal collaboration between us.

It comes across as inspirational, and it bothers me. Having people who have a disability in a performance shouldn’t be a special thing. It should be a normal thing. I’ve had people come up and tell me I’m inspiring, and I’ve seen that a lot on social media too.

With regards to press, what advice would you give to a reporter who is unfamiliar writing about dance artists with disabilities?

I would say maybe limit the excitement so that the work is seen as art and not just as a disabled person.

Even just for audience members, I would say to have an open mind. In mixed abilities work, it’s hardly ever about the disability. It’s about the relationship between the performers.

I think it’s mostly that teachers don’t know how to teach people with disabilities. It’s that, or they are not willing to figure it out. DanceAbility offers training on how to work with all people at one time.

When I take non-DanceAbility classes, my teachers are able to do their best at helping me articulate the movements. I also have had people come with me and help me. It’s happened a lot though that teachers have failed to include me. It’s okay to fail, but the most important thing is to try. For example, my newest ballet teacher is incredible at choreographing in a way that is simple and inclusive but also is at a level of high art.

I tell teachers that whenever they see me do something that is considered wrong technique, they should point it out and correct me like they would anyone. But that’s also because I’m older and have more ability to take corrections. But my advice in general would be to correct the student with a disability like any other student, but maybe not correct every little thing.

Jana: I want to add that I’ve talked to Kelcie’s teachers. They’ve reached out to me, and I’ve told them to let Kelcie’s body interpret the movement. For example, her plié is her body’s interpretation of a plié. Just the fact that she’s in the class is teaching other students that they can also have a slightly different interpretation of a plié relative to their own bodies. Teachers should teach students with disabilities like any other student, like Kelcie said, but also let the context of the dance form expand to include relativity of different bodies.

I would say it is both its own thing and it should be assimilated. I’d like to see it be a normal thing for people with disabilities to go to dance classes. But I also think there are some really cool steps and choreography you can do with different groups of people who are disabled. There is one group called ILL-Abilities who dance with crutches to do break dance. It’s amazing to watch and, as a person with a disability, it’s important to be around people who know what your life is like. I saw the DanceAbility company perform when I was seven years old, so I’ve been exposed to professional dancers with disabilities since I was really young.

So I think it should be part of the norm but also there’s something really special about having an opportunity for the disabled community to come together. I say that because, growing up, the only time I was around people like me was in pre-school because I went to a mixed abilities pre-school. That was valuable. I’m still friends with a lot of those people.

I love the term “mixed abilities.” For me, I don’t like “disabled people.” I prefer “people with disabilities” because it’s describing the person and then the disability. I also don’t like the term “special needs” because all humans have special needs. I’m guess I’m okay with “handicapped” or “differently abled” but they do bother me on some level. 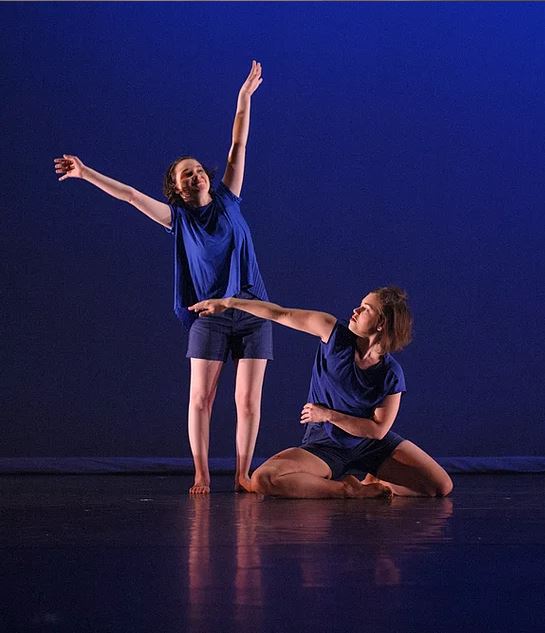 Image description: Kelcie and Jana are pictured dancing together onstage with a blue background. They are both wearing blue shorts and tops. Kelcie is standing with her arms above her head in a “V” shape. Jana is seated low on her knees with her right arm extended in front of Kelcie’s hip and her left arm wrapped around her torso.