What do you publish on the eve of election day if you’re the editor of a small online publication that focuses on intersectional dance content? Is there anything I can add to the deluge of media and opinion that hasn’t already been said? And yet to not publish anything noting the significance of tomorrow feels like an oversight.

This is the most important election I have voted in to date. I’ve loved following elections since I became old enough to vote, but this election is more tinged with anxiety than any I have experienced. The gulf between the country we are today and the country I want to live in has never been as wide. I would be dumbfounded to find any genuine Trump supporters reading Stance on Dance, so I will spare you another plea to vote for Joe Biden (and I assume you’re a dutiful voter who has already cast your ballot early or by absentee). But tomorrow, as our country engages in what I consider a sacred process – electing new representatives to govern us collectively – I challenge you to dance as part of that process.

Dance has always been a communal act. Anyone who has ever studied dance can attest to the energy that grows when people come together to boogie. Yet here we are amid a global pandemic, dancing separately in our respective homes. Even those allowed back in studios are carefully distancing, an act that feels antithetical to what dance is. We are constantly monitoring the negative space around our bodies to stay six feet apart, or connecting via the internet and recognizing the irony of trying to be embodied and making sure to stay in our squares on the screen.

The politics of this moment uniquely discard the body. Many Republican leaders have routinely downplayed the virus in the hopes of keeping the economy going, in short signaling that money is more important than health. And to be clear, I understand that it’s not an either/or question; health is in part dependent on the economy. But let’s also be clear that our bodies are biologically under siege by this virus, and some elected officials are doubly putting us under siege by seeming to not care. To me, this is cause to dance, to inhabit the body under siege and claim it.

One reason I historically have loved following politics is because I believe the most important elections are on the local level in city, county, and state elections, though of course the national elections get more attention. But what if politics went even more micro, down to just the individual in the poll booth. What catalyzes people to vote, regardless of the specific election? At its root, politics boils down to caring about community and expressing belief. To my mind, this is what dance is about too: care and expression.

Politics can seem ugly and ungainly to many, and I understand that perspective, especially after the onslaught of the past four years. But at its core, politics is a means for people to exercise care and express the world we want to see. Dance too derives its power from people coming together out of care for ourselves, each other, and the space we’re in, and then expressing ourselves physically.

I have already voted by absentee ballot, so I won’t be heading to the polls tomorrow. Instead, I will convulsively refresh the news even though I know it’s unrealistic to expect decisive results by the end of the day. I will be nervous and anxious, as I have been a lot lately. But I will also set aside a little time to be in my body, to express myself with care for the space around me. I will consider it part of my role as a citizen. It will probably be the best part of my day. 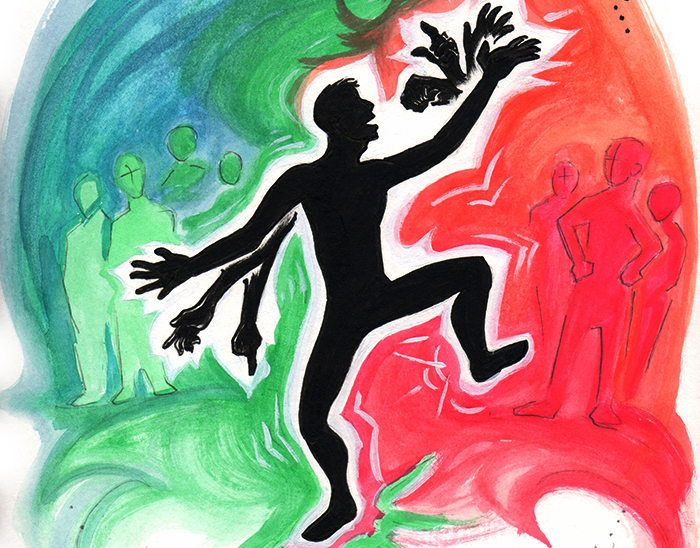 3 Responses to “Tomorrow, Let’s Dance as Part of the Political Process”