MurdaMommy is a footwork dance and music artist based in Chicago’s South Side. Her recent #TakeOffFridays give-away competition series and Take Flight footwork Zoom classes seek to engage and address the needs of her community through dance. Here, she describes her entrance into footwork culture, how her community has been affected by the pandemic and protests, and how footwork has adapted to virtual spaces. 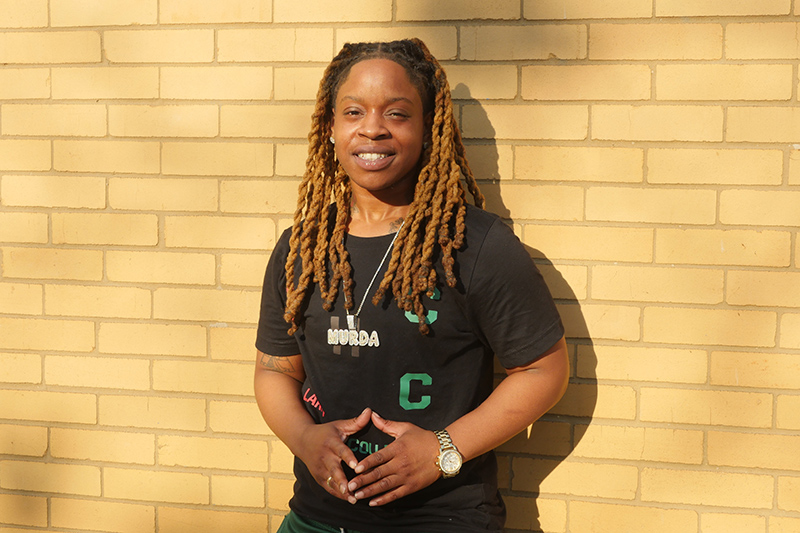 Can you tell me a little about your dance history – what shaped who you are today?

I’m MurdaMommy, the queen of Chicago footwork. I earned that title back in October 2008 at the first city-wide all-women “Queen of the Circle” footworking competition. Right now, I’m 29 years old, and I was raised on the South Side of Chicago. My short footworking documentary from 2018 called I Am The Queen is centered around empowerment and uplifting women in my community. I was honored and celebrated in 2019 for being a Black woman in dance by SWAN Day Chicago. I also became a 2019 Dance/USA fellow, which has been a big help to me during the pandemic.

I taught footworking to myself. At a young age, I would watch local television shows like Elma and Company on channel 19 that would show the lifestyle of the Chicago juke scene, which footworking comes from. I would go to juke parties and see footworking. I got excited and wanted to learn it. My sister used to try to show me steps when I was five or six years old. I remember once I was dancing and my uncle came up behind me and said, “What are you doing? You look like you’re just going crazy!” I tried to tell him, “I’m doing what they’re doing on TV!” I also saw footworking in the Bud Billiken Parade, a Black parade that’s been going on for almost a hundred years now. A lot of the dance groups in the community would dance down King Drive. Everyone would come out to see the footwork.

I had a friend in highschool who was one of the best footworkers in the school. We had gym class and lunch together, so I asked him to show me steps and he taught me bits and pieces. He ended up dead from a police interaction. I’m not saying the situation he was in was appropriate, but I’d rather him be in jail and able to come home to his family one day. After that, I decided I wanted to be the best footworker in the school. I started teaching myself, going to battles, and learning from the community.

Looking back on what shaped who I am – the good, the bad, and the ugly – it’s about having resilience and a good heart and soul. 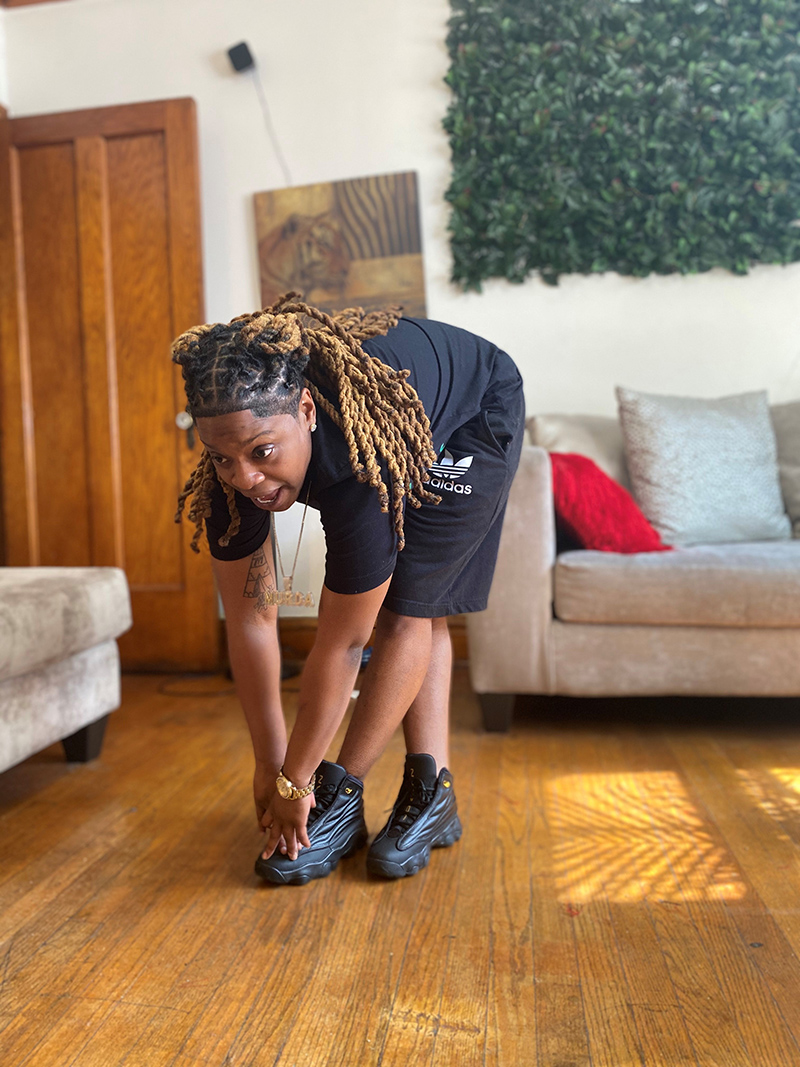 I understand that you live in Englewood in Chicago, a majority Black neighborhood that also has higher rates of poverty than the rest of the city. How have you seen your community affected by COVID and the recent protests, and how has that in turn affected your dance practice?

My community was most affected by the looting during the protests. Local stores were ripped apart due to frustration and anger, all combined with not knowing when people’s next check will clear or meal will be eaten. I have seen race wars spark before my eyes. I’ve been terrified by choosing what route to drive to work because of the endless dangers being a Black woman. Being an essential worker doing security at an elderly residence, I’ve seen people I know become infected. It’s hit hard.

Being an urban artist, I never had real opportunity. This time gives me a little elevation to catch up. Performances and residencies I had lined up were cancelled, but all it did was make me readjust, take a step back, and go back out there. I have to readjust and take a step back all the time though. This is nothing new for me.

Your current #TakeOffFridays series from June 5th through July 3rd gives away $100 to one dancer a week who downloads the footwork music track and records and tags themselves dancing, with any download donations going to food drives and PPE for the community. How is it organized and funded? What kinds of response have your received so far? What were your goals when you rolled out this project?

I organized this series to give back to my community. We’ve been going through hard times, and this is a way to have fun. It’s funded solely by my heart chakra; this money is coming out of my pocket as an essential worker. I want to give back and show love for the many artists in my community. They might need help with a phone bill, something to eat, or a movement class they can’t afford. As people are starting to learn more about the series, it’s starting to pick up more. At the beginning of the month, things were so hectic, but kids have started to get more involved and donations are starting to come in. I’ve raised more than $100 in donations for food drives and PPE. 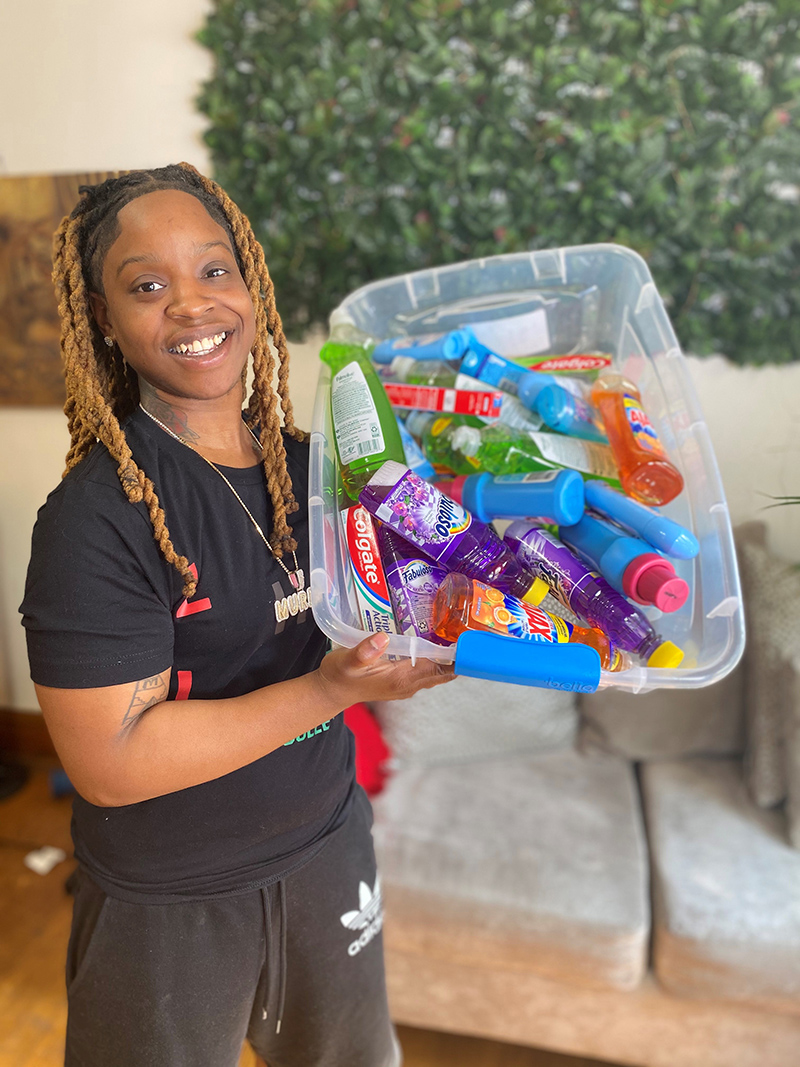 After the series ends, the entire album will be made available for download. Each week, after the track has been posted, it is removed so there’s only one song per week to be able to qualify. But at the end of the series, everyone can download each and every track for free, with donations still going to the food drive and PPE.

And just to clarify, this is my music; I own every single track. Music collides with dance. What I wanted to do with the music aspect was give the feel and sound of what Chicago is going through during this time. Footworking has its own genre of music. It’s a high tempo pace and melodic beat between 120 and 160 beats per minute. I constructed these songs for the people to be able to have something to listen and dance to while they are going through this time.

You also recently organized a series of free Take Flight footwork Zoom classes, with any donations going toward food drives and buying PPE for the community. What kind of engagement have you gotten?

Zoom classes are every Thursday for one hour at 4 p.m. central time. Donations can be made via Cashapp @$MurdaMommy90. If someone wants a personal class, they can contact me to set it up. I’m also extending myself to any dance company who wants to have me pop through and teach a virtual footwork class.

I’ve been getting some people who have never done footwork in their life as well as people who know footwork but are still beginners. It’s been a mix of people both from Chicago and outside Chicago. 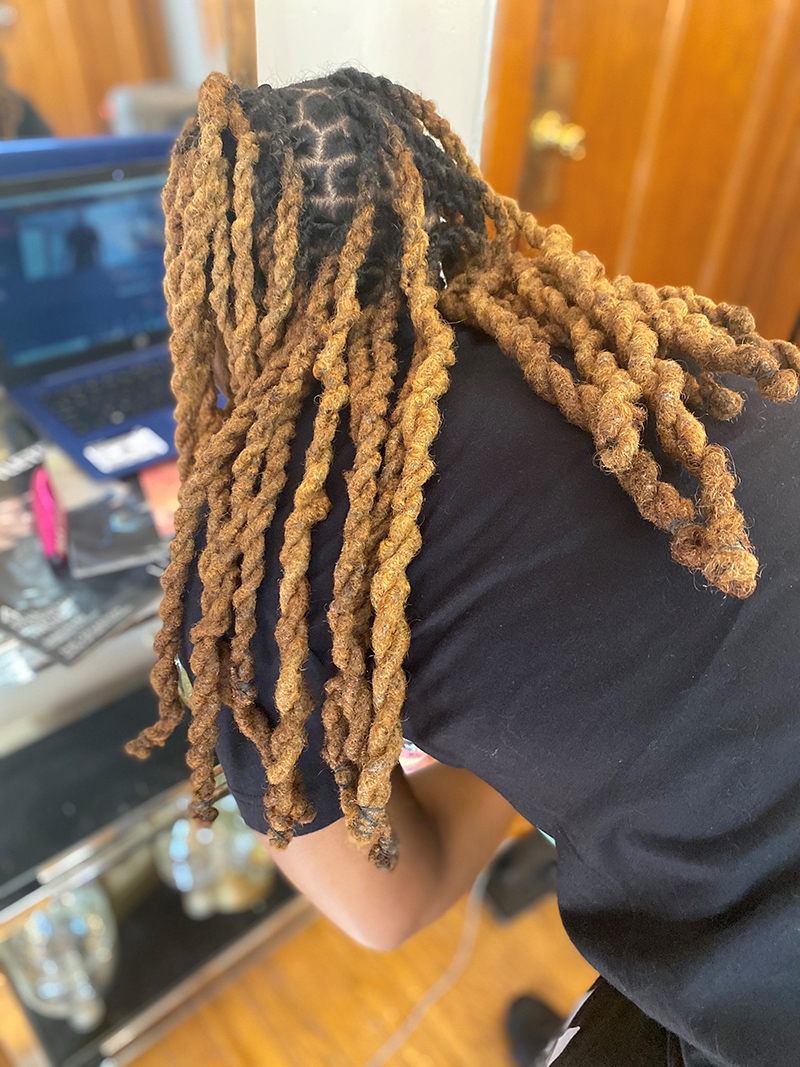 Speaking generally, have you seen footwork transition to virtual spaces during the pandemic? Are there other ways you’ve seen your dance community transition to this new reality?

Footwork had been expanding into virtual spaces even before the pandemic. As a teenager, I grew up alongside YouTube, which has been used to broadcast and teach our art. As a young person, my group members and I started making tutorial videos and interacting with people across the world, in particular Japan. Virtual classes have been going on for at least a decade, but it has been growing at a rapid rate now with COVID. Virtual classes are more open to the public on a grand scale, and it’s also opened different conversations within our community about what the future might hold. Footwork battling over video is crazy, but it works. A footwork group by the name of TOG has a series on Fridays on Instagram where footworkers submit their rounds and then compete to get the most votes. Things like this keep the culture going.

However, COVID has taken away the energy from having the other dancers around during an in-person battle. This disrupts the frequencies, so it becomes more of a performance and less of a battle when it’s virtual. My community misses the gatherings, but footworkers have been getting our hands dirty and protesting in Englewood, dancing to tell the world that our lives matter.

Chicago is a dancing city. House and juke originated here. We’re going to keep moving forward with the times and show people how to move with the times.