Chlo & Co Dance is a Bay Area company comprised of Courtney King and Chloë Zimberg, whose project, Tabled, brings together various artists to discuss endemic issues in the arts. The five-panel series runs from January through September. The second panel, The Ethics Of Production: Thoughts on The Political Economy of Performance Materials, was held on April 27th via Zoom and featured Bay Area artists Monique Jenkinson (drag performance artist Fauxnique), Joe Luttwak (musician and CEO of Lingrove), and Colm McNally (designer/technician/co-founder of Sugarglass Theatre).

This transcribed and edited version seeks to continue the conversation. Please feel free to get in touch with emmaly@stanceondance.com or chlocodance@gmail.com with your own thoughts on the ethics of production! 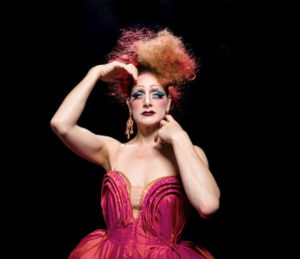 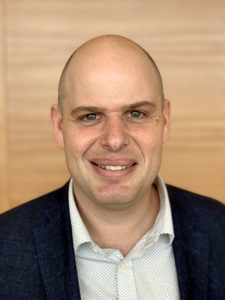 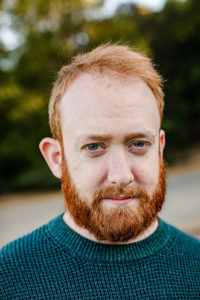 Questions for panelists (given in advance):

What does it mean to source materials ethically? That is the great challenge. I personally find it hard to know what’s ethical and I struggle with the problem of ethical displacement, i.e. “We solved a problem here but we’re just causing another problem over there.” Most of my work is in lumber. Theater construction is basically reliant on the same materials that the general construction industry uses, although we use less concrete and steel. I try to buy lumber from sources that are certified through the Forest Stewardship Council, but that often gets trucked from the East Coast. Is that better? Would it be less impactful to just buy locally even if it is not certified in terms of its replanting? I don’t know. On workers’ personal protection and housing safety, I feel more confident in that area in terms of trying to minimize the use of materials that are chemically problematic. I try to make sure workers’ spaces are reasonably well ventilated and that they’re not just inhaling tons of microscopic dust every day. And then there is changing infrastructure, like transitioning to LED lighting.

The guitar industry usually uses old growth rainforest wood, meaning trees that are 500 years or older. That’s the best material to make musical instruments. A lot of the good wood also comes from the Pacific Northwest. We’re still cutting down old growth trees even though there are five percent of these trees left worldwide, and deforestation is about 20 percent of global CO2 emissions. 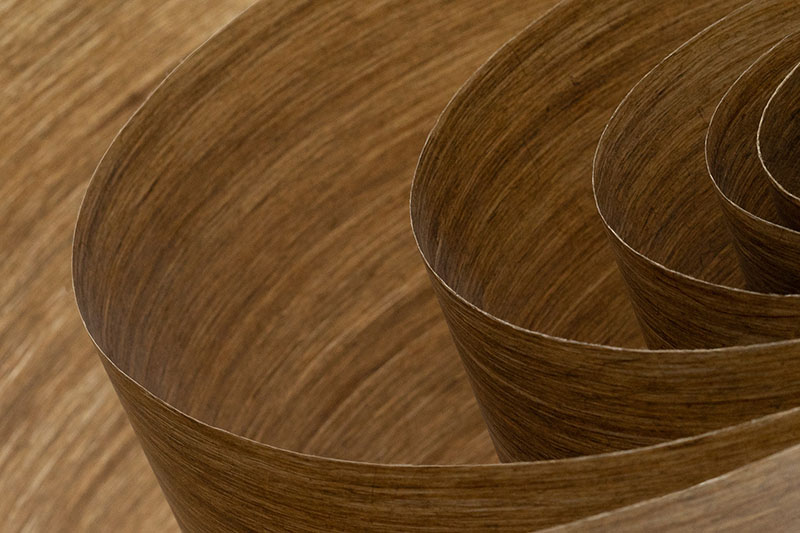 Materials like frankenwood that were developed as a way to use byproduct have become the product in and of themselves. We’ve discovered that MDF in particular is useful. It’s what we call dimensionally stable. Wood will change size and shape depending on moisture and temperature, but MDF doesn’t do that because it’s mostly glue. As a result, MDF cuts cleanly and is much easier to work with. For mass production at places like IKEA, it is a no-brainer to use frankenwood materials.

This moves us towards the question of cost. Dimensional stability is not a big problem in theater, but durability can be an issue. The real cost in theater are not the materials, but how quickly we can manipulate those materials. That’s why we find ourselves using frankenwood products. I would love to make sets out of environmentally friendly or reusable products, but it takes longer. It’s harder on the tools and it’s heavier. It just makes more sense for me to make sets out of MDF because I can cut it, depending on the thickness, with a knife as opposed to needing a saw. I can fabricate much more quickly. Speed is everything, as the cost of running a venue is enormous.

I’m thinking about the principles of sustainability, specifically “reduce, reuse, recycle.” We reduce first and then reuse if we can. If we have to use frankenwood, which is great for theater sets, being able to reuse it is contingent upon being able to store it. I barely ever work with sets, but I made a set for a piece in 2017. Luckily, I have a tiny storage space in my apartment where I could wedge the blocks I made. Otherwise, if we don’t have space to store our sets, they just get destroyed.

My world is on the costume end. I used to be able to go to Clothes Contact, Thrift Town and Mission Thrift. In the early 90s when I started making work, I could go to Clothes Contact and costume six dancers for $10, because it was by the pound. That place has gone, along with many other thrift stores. That goes back to another principle of sustainability. I might be buying something that was not necessarily made ethically, but at least I’m reusing it. The next option is Forever 21 or H&M, which is egregious, but we have to go to whatever cheap place dance artists can afford. Anything that costs $5 new was not made under ethical circumstances, but dance, of course, is a poverty-stricken form.

In preparing for this discussion, I was poking around on the internet and found a theater company called Superhero Clubhouse out of New York City, who are decidedly an eco-theater company. I have a quote here from one of the directors, who says, “We acknowledge that sustainability in the arts is culturally vital but insignificant as far as global environmental impact.” That is an interesting point because it speaks to reality. I did a show a couple of years ago where we covered a large stage in a foot of sand. It was a lot of sand – 15 tons! I’ve also worked in the construction industry where 15 tons of sand would arrive on a construction site and be gone in 10 minutes. The volumes we are working with in the arts are functionally irrelevant. It’s more about trying to find a cultural way forward than trying to be the trendsetters in terms of new environmentally friendly material. In the theater arts, we’re reflecting on the impact of our materials and our work practices, but also looking for cultural solutions in terms of certain expectations.

It’s the degree to which we have power to lead conversations. I think it’s ultimately about getting creative, sharing information, borrowing materials, reusing materials, leading conversations like this, and, sometimes you end up having to go to H&M. 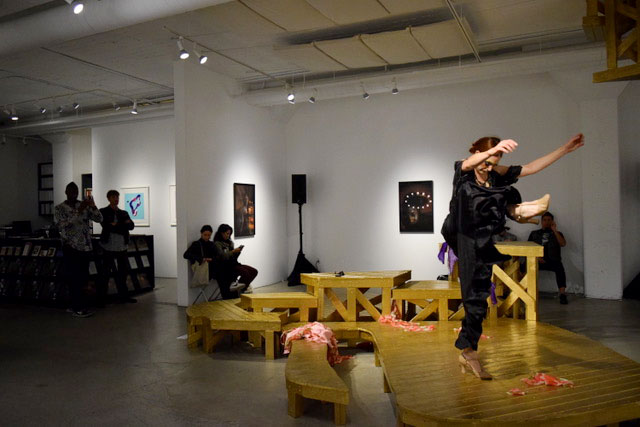 The new CEO of H&M is their former chief sustainability officer. That’s how serious they are about dealing with their fast fashion sins.

That’s great. And actually, H&M has a textile recycling program. I don’t know where it goes, but they accept bags of old clothing.

Colm, what do you do when you’re done with the materials you use in a set?

Right now, I hire a truck to take it to the dump. Waste disposal in the Bay Area is expensive. For a mid-sized show, we spend close to a thousand dollars disposing of the set.

There’s something wrong when we’re incentivized to spend a thousand dollars to throw away what used to be a tree.

Absolutely. I think a lot of this must be addressed legislatively. Someone needs to decide on a better plan.

My creative partner and I are trying to scale larger and have found it difficult to do so ethically while avoiding large expenses.

Those problems come up for all theater companies. At Sugarglass Theatre, most of us are technicians and designers; three of the five of us have worked in construction. For smaller theater companies, the key is to work with someone who has a better handle than you on these materials and how to do things cheaply. 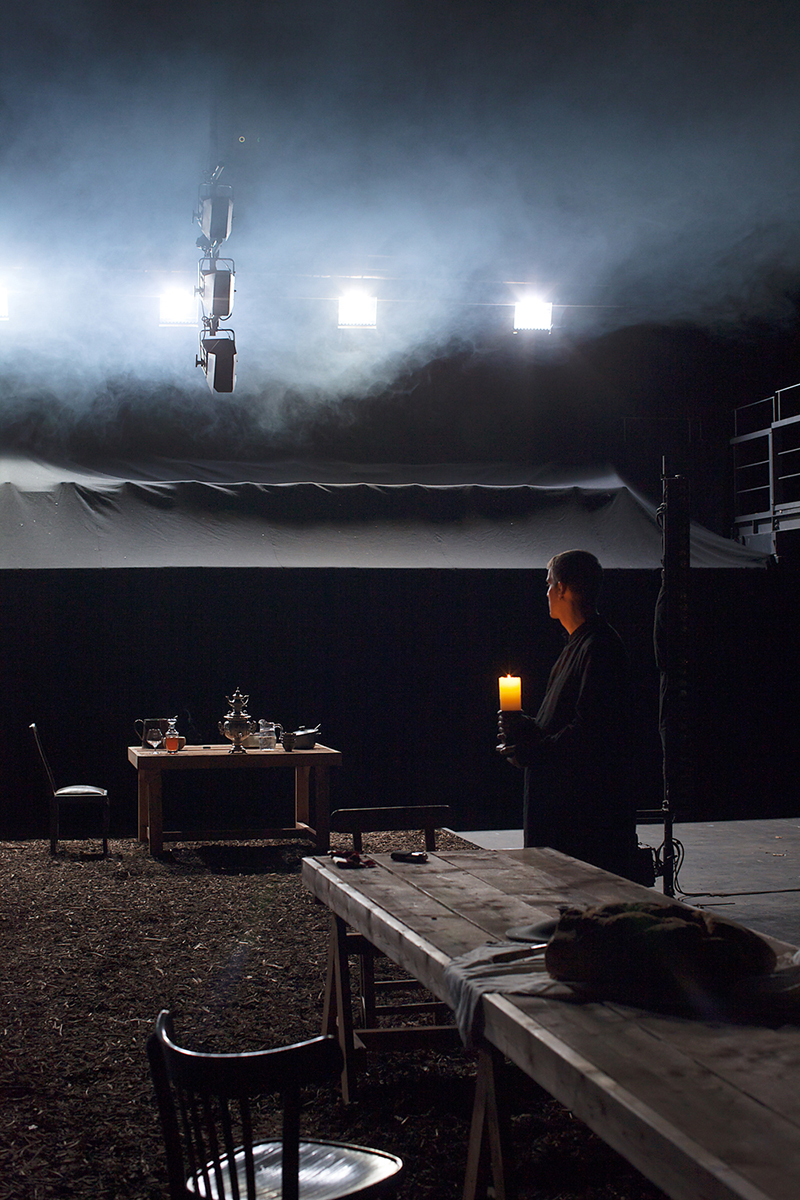 The Brothers Karamazov by Sugarglass Theatre, designed by Colm McNally

How do you ethically source flameproof materials that have to be in close contact with artists’ skin? This is often a requirement for bringing materials into theater spaces.

Flame retardants were developed by the tobacco industry because people were setting fire to their houses due to smoking and then falling asleep on their couches. The idea was, “It’s the couch’s fault; the couch is catching on fire.” So they invented flame retardants. Today we have phosphorus flame retardants regulated by California that are considered a lot healthier. California leads in regulating chemicals and has been informing the rest of the country.

In the theater world, unfortunately, we are still using a lot of ammonia-based flame retardants. In theater textiles we have three different levels of flame retardancy: We have NDFR, which is non-durable flame retardant, so if you wash it, it is not flame retardant anymore. DFR is durable flame retardant, which means you can wash it a few times. And then there’s IFR, which are materials that are inherently flame retardant. IFR is what you want to use next to a performer because they’re mostly natural fibers like wool or horsehair. They are sufficiently flame retardant to a standard that the San Francisco Fire Department and various other authorities are happy with. However, this does not mean that they are flame proof. We use a good amount of electrical tape in theater because it is self-extinguishing, which means it will light on fire but will put itself out in five seconds because it admits a gas when it ignites that is not oxygen.

In the past few years, I’ve seen a rise in the use of big sheets of transparent plastic as a material onstage. It’s difficult to make that safe from a flame retardancy perspective. The fire department will put in place other requirements. For example, if someone is wrapped in a sheet of plastic, then that person might have to be 30 feet from any heat sources, including most of your theater lights, and there must be three people backstage with fire extinguishers and an ambulance onsite. Fire retardancy is not the way around those problems. Often, it’s thinking about alternate routes to achieve the same effect.

By just going to see them and keeping this discussion happening. Connect with people in the industry. And raise your hand if you know how to help ethically make art. 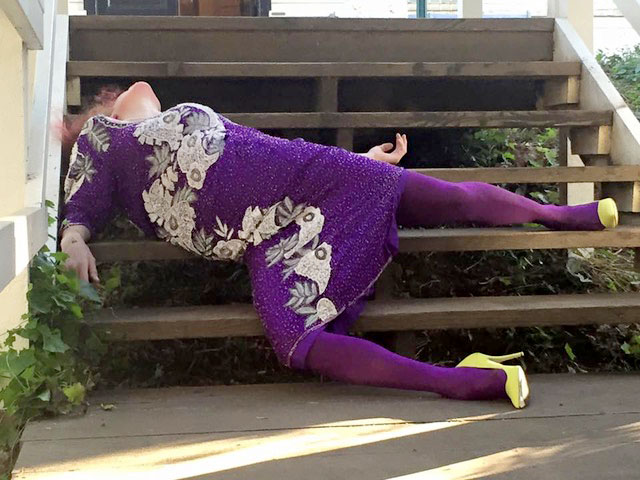 Monique Jenkinson at Headlands Center for the Arts, 2015, Photo by Marc Kate