An Interview with Jess Martin

Jess Martin is a dancer and choreographer in Chicago, Illinois who dances with Momenta Dance Company as well as produces/directs Exploration: An Evening of Dance, Discovery, Creativity, and Fun. Here, they describe their road to becoming a choreographer as well as why they started Exploration to increase representation and opportunities for people who identify as having a disability and being LGBTQ. 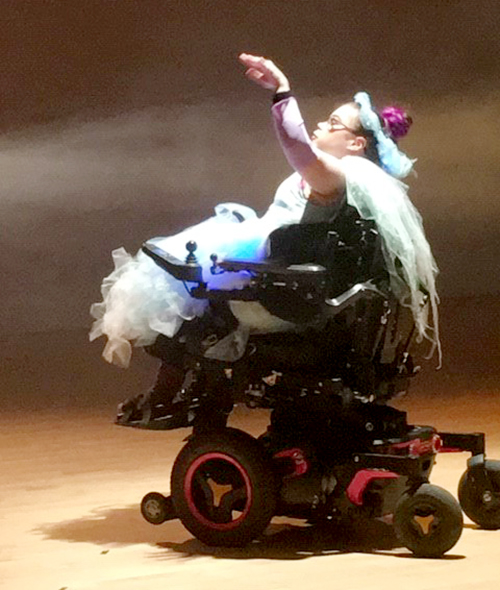 Can you share a little about your dance history – what kinds of performance practices and in what contexts shaped who you are today?

For as long as I can remember, I was moving in my own way; this is also known as choreographing. However, when I first started dancing, I did not even know what that meant. But who would at only four or five years old? I would spend hours in my room or outside on nice days creating little dances that I would later show my family, close friends, and even my stuffed animals.

I wanted to go to the classes that my friends or typical peers were going to after school, but back when I was a kid there weren’t really places that would allow a person like me to go to classes, so I had no choice but to continue doing what I could with the resources I had. Then, at age nine, I found a group that could accommodate me and other kids like me to dance. It was fun and I learned a lot. However, I still felt like something was missing. When I learned about physically integrated dance, I knew that was the answer I had been looking for, for years. My first experience seeing physically integrated dance was when my mom, my friend, and my friend’s mom went to see Dancing Wheels.

Fast forward after several years of frustration, I came across Dance Detour, which was very similar to Dancing Wheels, but they were closer to me in Chicago. Of course, when I found out they were having a workshop, I went downtown to the city. That is where I was first introduced to Ginger Lane and Kris Lenzo. After talking to Ginger and Kris, I found out that Dance Detour was not hiring, but there was a semi-physically integrated company located in Oak Park, near where I live, called Momenta Dance, and Ginger thought that, with my determination, I might be able to join their company if I went to their monthly workshops and got more training.

Two years after that, I became a company member with Momenta and performed in my first company show, which was a matinee. I later began doing everything from choreographing my own work, to assisting children in their matinee productions, as well as being in pieces by other choreographers in the company. In 2011, I choreographed my first piece for Momenta and my choreographic career has blossomed ever since. 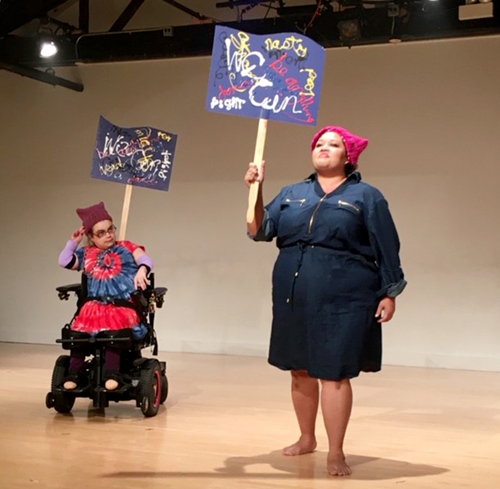 How would you generally describe your dance practice?

I take classes at Momenta two to three times a week as well as other classes in and around Chicagoland. Momenta and the Academy of Movement and Music are like a second family to me now and I firmly believe, without coming across Momenta and the Academy, I wouldn’t be the dancer that I am today, let alone have the confidence to start my own company.

Most of my training has been in modern, contemporary, improvisational movement, Humphrey, Graham and contact improvisation. I have been very lucky to work with two different teachers who were in the Martha Graham Dance Company when they were younger; one of them used to be a demonstrator for Yuriko Kikuchi, the only living member of the original Martha Graham Dance Company; she is 100 years old.

At the Academy, there is a high emphasis on Doris Humphrey’s technique because Doris Humphrey was born and raised in Oak Park, and the founder of the Academy of Movement and Music and former director of Momenta Dance Company, Stephanie Clemens, felt it was important to keep her technique alive; so important in fact, that she named our theater the Doris Humphrey Memorial Theatre. I have also had the privilege of working with someone who studied with Gale Corbin who demonstrated for Humphrey when she was younger. I also feel very fortunate to travel around the US for conferences and workshops focused on physically integrated dance and disability culture. In 2008, I went to AXIS Dance Company’s summer intensive. In 2014, I took an intensive with Dancing Wheels and, most recently, in 2019, I participated in the first Disability Arts and Culture Symposium located in Ypsilanti, Michigan.

When you choreograph, what does your process look like?

When I choreograph, I often draw from my personal experiences. I am also very interested in the human condition and how we are more alike than different. Overall, I consider my process to be very collaborative. I start with a vision in one of the areas I mentioned above, then we work together to make what is seen onstage a reality. Usually I have an idea for a beginning and end, but my dancers help me with the “meat” of the sandwich so to speak. This process is very special because we develop an understanding of each other and what we are trying to convey throughout the process. We make up our own words to express to each other what we want the audience to understand or come away with. I also sometimes leave it open-ended because I want the audience to have their own interpretations of my choreography. I am not one of those choreographers in which everything must be explained. I like when the audience members can make up their own mind on how to interpret what it means to them. 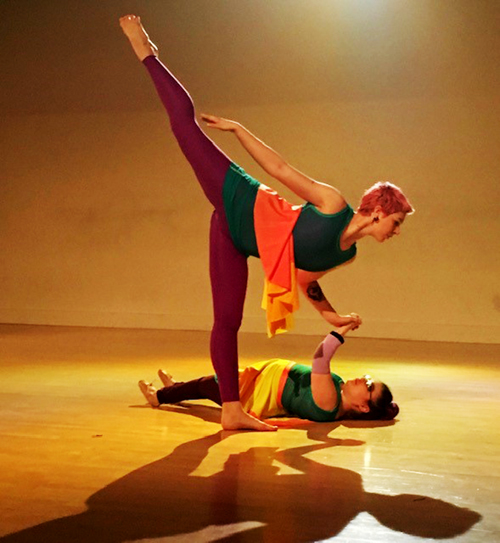 I wouldn’t consider them issues; I would just consider them areas in which I want to explore deeper. Three areas that are most important to me right now are: partnering with all genders to help break the stereotype of who can dance with who; exploring the ways in which the dancers and I can connect through different stages of human development; and coming up with small ways to improve my shows and my personal practice, whether it be for Momenta or Exploration.

What was the impetus for starting Exploration: An Evening of Dance, Discovery, Creativity, and Fun, and how would you describe it to someone unfamiliar with what it is?

The impetus for starting Exploration came from the lack of access for the disability and LGBTQ communities to create and show work. I wanted my audiences to see that just because we are a minority doesn’t mean that we shouldn’t be able to create work. Being a part of both minorities, I felt like I needed to create something where minorities could come together and just be themselves and be able to dance because both communities are severely underrepresented in the dance world. I wanted my dancers and I not to feel like underdogs anymore. I was also inspired by AXIS Dance Company and Sins Invalid, both located in the Bay Area, California. Over the years, as mentioned before, I have seen a lot of companies that were physically integrated, but they didn’t express gender identity like Sins Invalid.

Our mission is to:

Our vision is: Everyone can dance; our struggles help define our uniqueness. Because we look at our struggles in a positive way, we do not put limits on anyone. We are open to the idea that anyone can dance. It does not matter your age, race, nationality, sexual preference, mental challenges, or body type. We want to look at the person inside and see how they can use their uniqueness to share their messages with the world.

We started in 2017, and every year we include new areas of interest that come up in our rehearsals, while also staying true to the mission and vision. Even though we have different themes each year, the mission and vision are always present throughout the whole process. It’s a starting point for rehearsals and the show, but how it is expressed is different every year.

What do you hope to accomplish through Exploration?

For now, EXPLORATION is just in the Chicagoland area in partnership with Links Hall, but I would like to travel someday to spread our message to other communities throughout the US and world. I also want to get to the place Momenta is. Right now, we are having to rebuild the company season after season, and it is very stressful for me as the producer. However, as a company, I feel that our success or accomplishments start from the mission and vision; that part of my work has already been accomplished and now I just want to grow it year after year.

I was planning to start our season in January but, due to the coronavirus, I had to stop mid-season and reevaluate where Exploration would go. Our typical season starts in January and goes through June in honor of Pride month. I am working from home right now to figure out the next step. In the meantime, I am creating classes via Facebook for any dancers who want to dance from their homes. I am hoping that this will improve my new skills of becoming a teacher, as well as brightening people’s day so that they have something to look forward to in this time of isolation. Another one of my goals is to start an online discussion focused around disability arts and culture.

Finally, am putting together a Facebook page for Exploration, because people always say, “Your company sounds cool, but do you have a website where I can see your work?” This will give me a chance to build Exploration’s online presence. 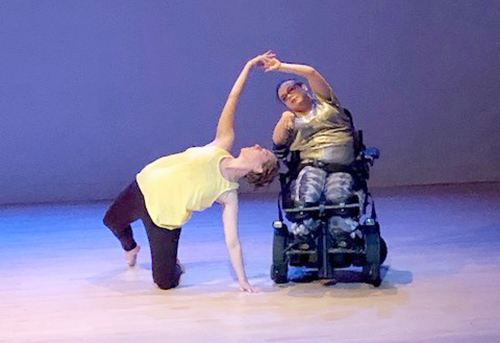