An Interview with Jenn Freeman

Jenn Freeman is a Chicago-based performance artist who uses the stage name Po’Chop and who incorporates elements of dance, storytelling and burlesque into her work. Here, she shares more about her history finding her voice through burlesque and about her recent piece, The People’s Church of the G.H.E.T.T.O. (Greatest History Ever Told To Our People), which aimed to uplift Black women’s voices through spirituality and sexuality. 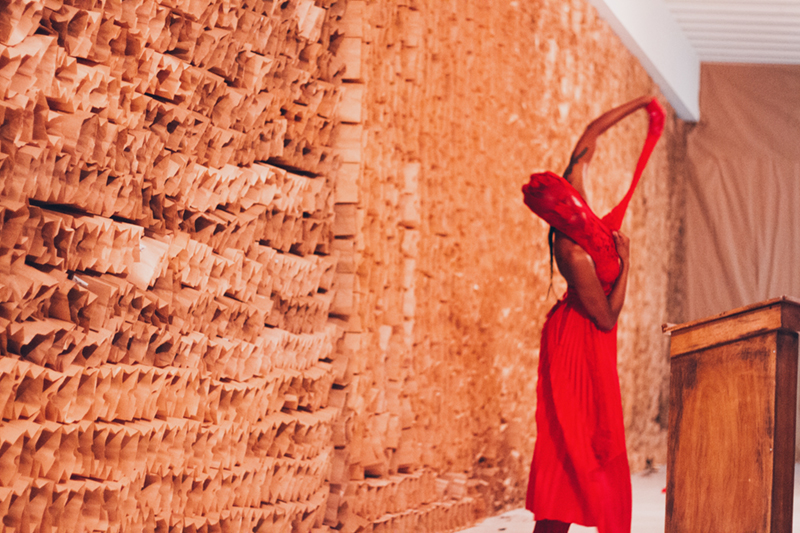 I started dancing when I was three or four years old. I grew up in a small town in Missouri. I went to a very small mom and pop dance studio that taught typical ballet, jazz and tap with a recital at the end of the year. The first dance I ever choreographed was for the Praise Dance Team at my church, which I was a part of. That was the first time I began my own dance practice.

From there, I studied dance at Columbia College Chicago, where I was introduced to modern dance. Being in Chicago and being at a liberal arts school was a major cultural shock. My whole goal had been to start a ministry through my dance, but my belief system was shaken. I was at Columbia College for maybe two and a half years, and then I dropped out and stopped dancing for maybe five years.

I was introduced to burlesque and the nightlife cabaret scene through a friend. Eventually, I went to enough shows that something in my brain finally said, “I should do this.” I started performing burlesque as a way to get back into dance and begin cultivating my own artistic vision and voice. That was maybe 10 years ago when I started performing again. Through burlesque and the night life scene, I developed the bulk of what my artistic voice is now.

Can you share how the name Po’Chop came about and how it shapes your artistic identity?

I originally began performing under another name, Jenny Sais Quoi. Typically in burlesque, if you are female identifying, your name is froufrou. There are a lot of Pixies and Cherries. When I selected my name, it was important for me that it was a reflection of who I am. Pork chops are one of my favorite foods. When I was 18, one of my last dance instructors pulled me aside and told me the things I needed to do to be successful in dance. I distinctly remember he told me to not eat pork anymore, or meat in general. So Po’Chop is a reclaiming of what was important to me. I also wanted people to look at my name and get an idea that I was Black. Through the development of Po’Chop as a character, I developed a persona that is very demanding of attention. In the nightlife scene, there’s lots of drinking and it can be loud; there’s a lot of activity going on. Po’Chop is not afraid to take up space and be aggressive. 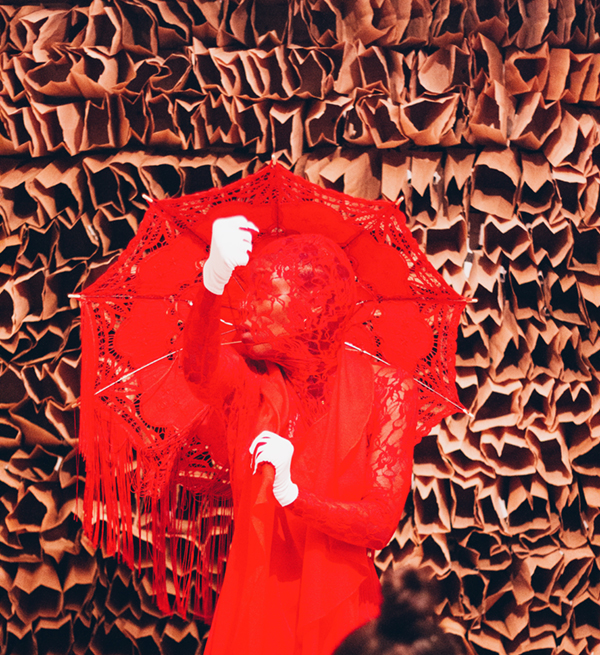 How would you describe your work to someone unfamiliar with it?

Outside of Po’Chop, I’m very shy and introverted. Through the development of Po’Chop, I explore the idea of fullness, bigness, and how much space I can take.

I also like to play with the rhythms in the songs I perform to. Depending on the space, and because I started performing in the church and with Praise Dance, I like playing with being quite literal with the words. It’s not lyrical dancing, but it’s my take on lyrical mixed with other influences.

Most of my work is developed through improvisation. If it’s a newer work, 75 percent of it will be improvised. The more I do a piece, the more I find moments I want to keep.

What does your process generally look like? Is your work mainly improvisational or set choreography?

It fluctuates, but if I’m developing a burlesque act, it usually starts with the music. Most of the movement is inspired by the music. From there, it’s just being in the studio and playing. I find that movement comes easier for me if I put myself in an imaginative situation. I am acting in a way, in terms of creating a world for Po’Chop to exist.

Is there a specific piece you want to share more about?

I just produced The People’s Church of the G.H.E.T.T.O. (Greatest History Ever Told To Our People) in September. The concept for it was reimagining who and what we praise and uplift. I wanted to create a space for Black women to be uplifted, and particularly Black women from Bronzeville, a historic neighborhood in Chicago I currently live in. I spent a lot of time walking and dancing around the neighborhood. There are a lot of empty lots that once were associated with public housing, so I danced in those. I also read about the history.

Movement wise, I was trying to place myself physically in my childhood church and thinking about the many members of the church. I did many work-in-progress showings that included a lot of improvisation. It was the first time I realized how much improv is a big part of my process. I’m not really interested in trying to hammer out every eight counts. Instead, my choreography is figuring out emotional beats I want to return to.

The entire church is rooted in the life and work of Audre Lorde. We had a devotional area where we just focused on Audre Lorde and her work. Then the service was based on her poem called A Song for Many Movements. 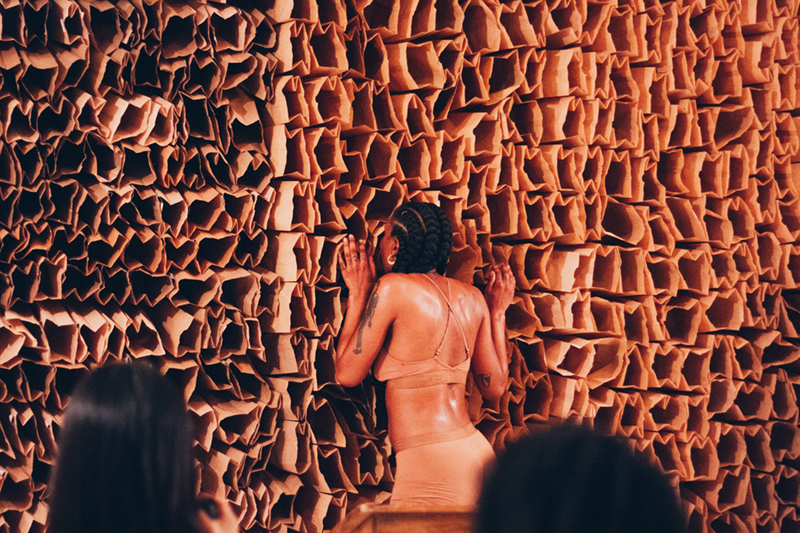 The People’s Church was the first time I had a long time to sink into the process. I knew the visual element in the costumes was important in how to tell the stories. In burlesque, one of the things highly touted is that we make our own costumes. I was dressed in all red, and then I peeled out of the red to reveal myself. One of the women we were uplifting was Jackie Ormes, the first Black woman cartoonist to have a syndicated comic. Some of her drawings are paper dolls. In the section about Jackie Ormes, I essentially made some of those paper doll designs my costume.

The church was a collaborative joining of forces; my partner Tiff Beatty, who is a poet, co-produced it with me. Together, we developed a piece for the church about Beauty Turner, a public housing activist. Then there was a burlesque performer, Shimmy Laroux, who did the church announcements, parodying the church bulletin. I also had a singer/poet, Avery R. Young, who did our alter call, which was inspired by the first Black woman pastor in Chicago, Elder Lucy Smith, who was also a faith healer.

Looking at your work history, are there certain themes or issues you feel are particularly important to you to keep tackling and addressing?

As soon as I started creating work, it was important for me to talk about my own experience as a Black queer woman, as well as exploring spirituality, sexuality and religion.

In the past three years, I’ve felt the need to acknowledge the quieter side of me. In burlesque, you are your character; there’s no acknowledging Jenn Freeman. It became important to me outside of burlesque to show vulnerability and how Jenn Freeman, the introvert, could also exist onstage and in performance.

What are some shifts (if any) you’ve seen or experienced with regards to QTPOC access and representation?

I think it’s as hard as ever, but I also think I’m in a fortunate position. For instance, I’ve found Chicago Dancemakers Forum where there are people advocating for me behind the scenes. It shows up in opportunities that have found me.

Honestly, I’m just resting. The People’s Church took a lot out of me. I have a hard time thinking about the future, but I know there will be more. The People’s Church is not done. It was the first time I put so much of myself into something, and now I feel foggy and lethargic. I would love to eventually travel it out of Chicago. But for now, what’s next is rest.

To learn more, visit www.itspochop.com or follow her newsletter!