Mary Elizabeth Lenahan, MS, OT, is the founder and artistic/executive director of Dance Express, an inclusive dance company based in Fort Collins, CO for people with and without disabilities. Here, she shares the history and structure of the company, which has been promoting diverse artistic expression and creativity for 30 years, and how she’d like to grow its vision in the future. 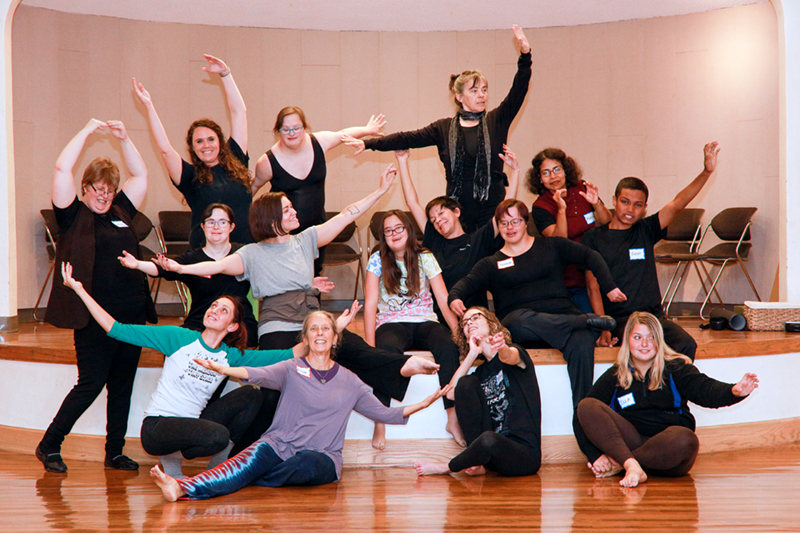 Can you share a little about your own dance history – what kinds of performance practices and in what contexts shaped who you are today?

I loved to dance as a young child. My family went to the polka hops on Sundays, which was my first dance experience. I loved the radio as a teenager and going to Friday night dances with a live band at the high school gym.  My sister had Down syndrome and, because of her, I thought I’d look into dance therapy in college, though decided against it when I let the thought of not earning enough money discourage me. However, I took dance in college and there were opportunities to perform with the dance and theater departments. Saratoga Springs is near where I’m from, and the Saratoga Performing Arts Center would bring in guest artists, such as Paul Sanasardo, for inspiring summer dance intensive workshops.

I moved to Colorado and got my master’s in occupational therapy. I still wanted to take dance classes and was still interested in dance therapy. I met Jane Slusarski-Harris, who was the new dance department director at Colorado State University in Fort Collins. With Jane, we auditioned our first company of dancers for Dance Express. On February 25, 1989, Dance Express was founded.

How is Dance Express structured?

Initially, there were eight people who auditioned, and we ended up with a troupe of six. We performed that summer at Fort Collins’ first official New West Fest. Our year runs from June through May with more intensive community engagement from September through May. For the past 30 years, we’ve met on Sundays to rehearse, as this seems to be a day with fewer scheduling conflicts for people. We have varying number of productions per year. Initially we did more studio concerts and guests appearances. Then we grew into having our own productions at the local performing arts center and other sites, in addition to making guest appearances. Some years, we’ve done as many as four productions, while other years we’ve done as few as two. In general, we meet once a week and perform three times a year.

There are now nine dancers in the company, mostly comprised of dancers with cognitive developmental disabilities. Over the years, we’ve had as many as 17 people in the company and as few as six. My sister was involved when she lived in Colorado from 1996 to 2015. She died last year. She was part of the dance company for many years, and continues to be an inspiration for us all.

Three years ago, in 2017, we began the Dance Beyond the Limits regional inclusive dance convening to include more people outside of our realm. It’s a one-day event held the first Saturday of the month of October. The first year, we had three or four workshops of inclusive dance led by different teachers. Then we had community leaders speak about inclusion in the culture. Last year and this year, we cut down on the discussions because we’ve gathered the information we felt we needed for our local cultural plan. For 2018 and 2019, we had Jana Meszaros of DanceAbility International teach master classes, as well as other teachers present workshops in ballet, partnering, improvisation, Feldenkrais and eurythmy. It was great to have that variety of movement followed by short discussions. I want Dance Beyond the Limits to grow to a two-day event with a major inclusive dance company performing as a culminating segment. This convening is intended for the Western region of the United States.

Our style has evolved over the years.  We work with modern dance, improvisation, and popular dance. I like to facilitate movement two ways. I create choreography and allow it to live and breathe with the dancers. Or I facilitate choreography, where one person creates one sequence and another person adds to it and we build a dance. The second method grows from the people in the room.

One dancer has been with Dance Express for all 30 years. She is a good leader and oftentimes creates choreography for the troupe. The dancers share a memetic sense, in that what one person does, another person is able to read, so that a piece comes together without being superimposed. There’s a feeling more than a structure. We dance both to the music and use it as background. I’ve had to learn to be flexible and give a little open rein to the product, and to realize it’s not going to be the same every time. 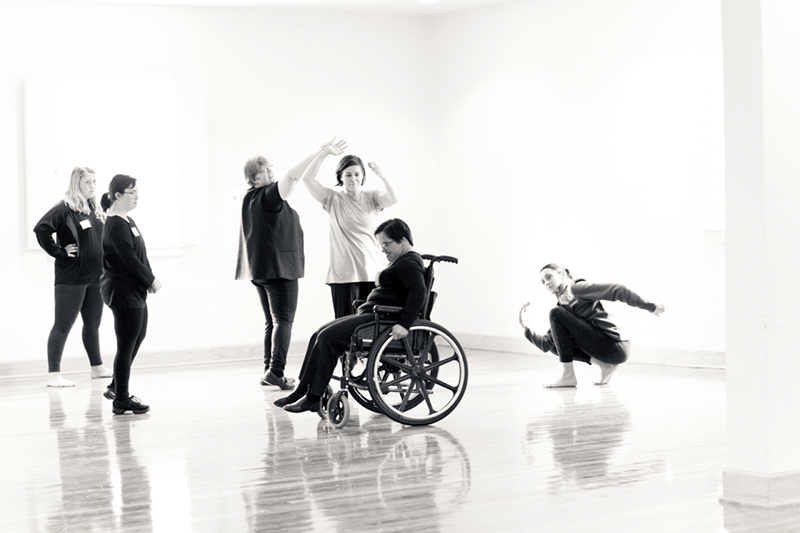 How would you describe the dance scene in Fort Collins, and how has Dance Express fit into that scene?

I was at CSU when Dance Express began, so we had an alignment with both the dance department and the occupational therapy department. Since my children were growing up while I was developing the dance company, we also had relationships with elementary schools and high schools. Through those relationships, we’ve always included people without disabilities.

In Fort Collins, there is a ballet company that has been around 10 years longer than Dance Express. There are also modern dance companies that come and go. We have a new dance school for adults who want to do performances. We’ve done collaborations with many different organizations over the years. For seven years in a row, we collaborated with the ballet company. For another five years, we did a DanceMakers series to invite ballet, modern, flamenco, tap, belly dancers and other genres to create concerts with us. There is an inclusive dance company called Spoke N Motion out of Denver who we have yet to perform with, though we’ve shared the stage with them at guest appearances and some of their dancers have participated in Dance Beyond the Limits.

Over the past 30 years, how have you seen Dance Express impact the community?

What I’ve seen over the years is that there is more acceptance that people with disabilities can be dancers with access to the arts scene, making contributions to the culture. I imagine the mindset began in the 1980s to allow people of all abilities to participate more widely in the community. Now we see more people of differing capacities being accepted into the mainstream. However, this can depend on what circle you’re in or what community. We have 165,000 people in Fort Collins. Not everyone is aware of us, or even aware of the local ballet company. There are circles of people who know, and circles of people who don’t know. In the circles of people who know, it’s become more accepted and desirable that people with disabilities dance. In the circles who don’t know, they wonder if it’s really art.

Part of working with school groups and other dance companies is to bring that awareness into the conversation. Doing workshops in the schools or detention centers, there was initially a bit of a question mark. Now there’s almost instant acceptance.

How would you like to expand Dance Express in the future?

We have used various spaces around town, so our big goal is to have our own space at an expressive and healing arts center where Dance Express could have its home with other dancers, artists, therapists and healers, such as acupuncturists, massage therapists and/or arts support groups. There would be a huge performance space that could be shared with the community. This is my really big dream!

Adjacent to the center would be housing that would serve as nurturing care environments for people who are aging and don’t want to go into a facility or for persons with disabilities. They could live nearby within walking distance of the community center and access the art, dance and therapies. As they age further and can’t go to the center, the services could go to them in their homes, and finally allow them to die in their homes. That idea is a result of my sister and brother and their end-of-life experiences. There has to be a different way.

Those are the big dreams. Right now, I’m looking to create a larger board of directors and strengthen our infrastructure to offer more services. Rather than simply being a performing dance troupe, Dance Express can offer more workshops for people of all ages and abilities, such as the elderly, incarcerated, and/or those who feel challenged by dance.  We want to create greater capacity. Right now, our company is for dancers over 16, though we also work with children through workshops in the schools and collaborations in one of our annual productions.

In addition to re-vamping our strategic plan, we are building a sustainability plan for when I leave to travel around the world and walk the Camino de Santiago! I think Dance Express is important, and I want this dance to go on beyond me.

There’s a balance between enjoying what you do and creating a professional product. Sometimes, what people love the most about Dance Express is the joy that is given from the dancers to the people who see them. It may not be perfect execution, yet the sincere joy in dance is apparent and is the gift we share. 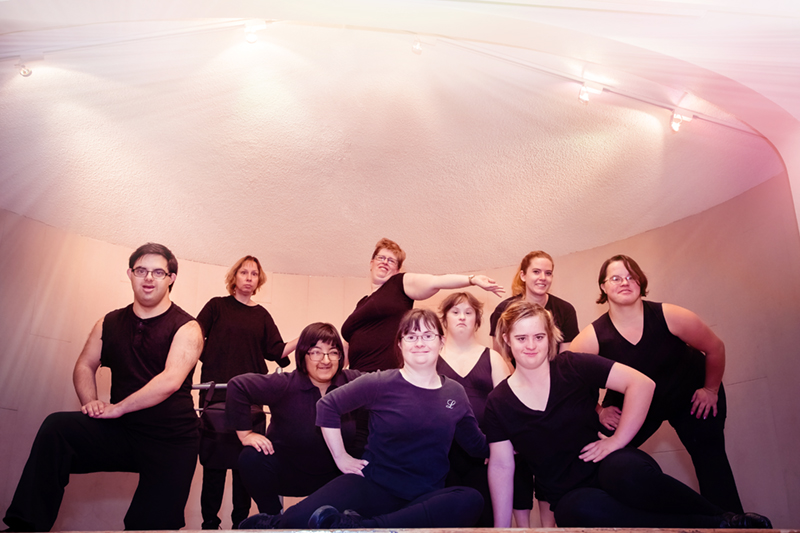