An Interview with Marlene Monteiro Freitas

Originally from Cape Verde, choreographer Marlene Monteiro Freitas is the co-founder of P.OR.K production company in Lisbon. In 2018, she was awarded the Silver Lion for Dance at the Venice Biennale, the same year she was invited to choreograph a new piece for Batsheva Dance Company in Tel Aviv. Here, she shares the impetus and process behind her newest work, Bacchae: Prelude to a Purge, which makes its US premiere at BAM Next Wave this coming November 7-9. 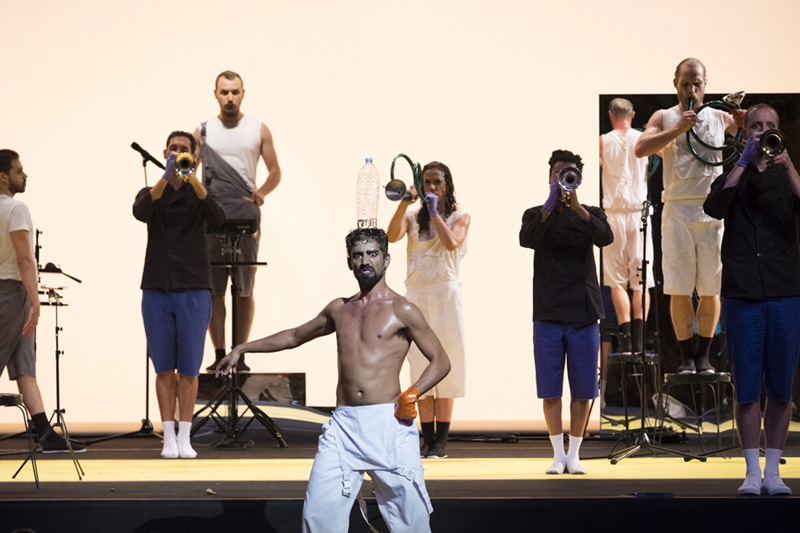 I was born and grew up in Cabo Verde, where dancing is part of the social and cultural fabric every day. At a very young age, I started practicing rhythmic gymnastics. I used to suggest to the trainers the music, theme and movements for the different apparatuses that I would perform. Maybe this was already an involuntary choreographic act?

Later, with friends, we co-founded the dance group Compass. Basically, we rehearsed and did small shows. We could not think of dance from an academic perspective, as there were no dance schools or classes in Mindelo. Therefore, we were left with rehearsing; that was all we knew. We choreographed a variety of dances, music and ideas. We did what we liked, we did it for fun. We dreamed of becoming dancers, professional artists. We pretended so hard that at last this became the center of our activities.

At age 18, I moved to Europe to study dance at a university level. First, I went to Portugal (Escola Superior de Dança) and then to Belgium (P.A.R.T.S). This was when I first contacted the tradition of Western dance in a structured way.

How would you describe Bacchae – Prelude to a Purge to someone who hasn’t seen it?

Bacchae – Prelude to a Purge is comprised of a group of dancers and musicians with the usual borders separating them being blurred. Immediately a question arises: is he dancer, an actor, a musician?

The show is an energy outburst produced from the clash of disparate entities, some harder, others softer. There are contradictory elements between what is happening onstage, in the audience, and the projection of the imagination of a single member.

I think of it in terms of a fiction. That is to say, there is freedom in placing materials which normally do not go together in a counter-intuitive, non-consequential and yet vital arrangement.

The idea was never to tell the story to the public as the unfolding of a linear narrative in a theatrical way, with characters and sequential events. Until a late moment, my show still reflected, with great degrees of freedom, the structure and events of the play. However, as I and we carried on working, this went on changing, until finally, like the play where the transformation of characters is sudden and radical, the show became closer to cartoon than to reality.

How did this piece come about? Why did you decide to draw on this particular Greek tragedy?

Tiago Rodrigues, the artistic director of the National Theatre in Lisbon, invited me to work on a Greek Tragedy. I chose Bacchae, as I read somewhere, “Euripides’ Bacchae is a piece of dances and mysteries.” This and its narrative development, its irrational twists and outcomes, attracted me; I wanted to get into it.

It evolves through appearances, illusions, metamorphoses and social statuses in danger; the play unfolds in a non-intuitive way, full of interventions that change the course of the story unexpectedly but above all for the last pages of the play when Agave returns to the palace with the head of her son, Pentheus, the king, between her hands as a hunting trophy, and her father, the grandfather of Pentheus, guides the eyes of his daughter, possessed by Dionysus, in order for her to see that what she carries between her hands is the head of her own son and not the head of a lion. It is extraordinary; it moves me each time I read it.

There always has been to me an ungraspable aspect of this play, which was one of the reasons why I decided to work on it, and this has remained as such until today. 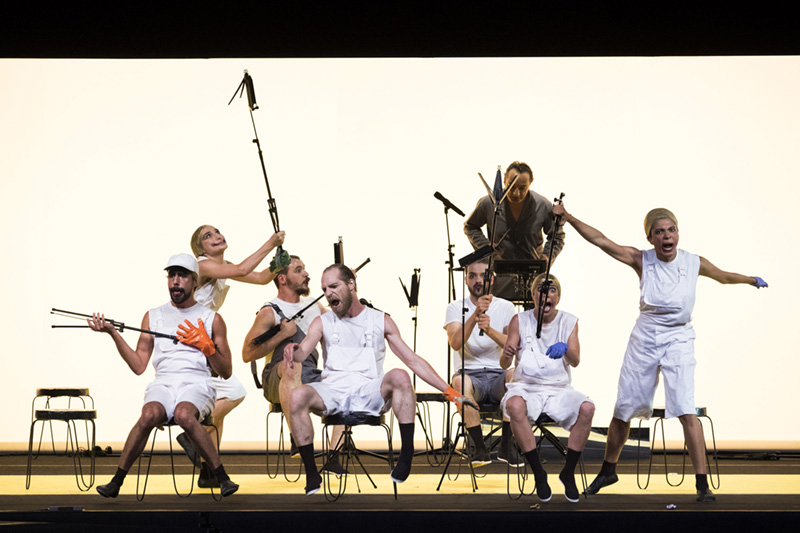 What was your work process for creating Bacchae – Prelude to a Purge?

Euripides fantasized about a ritual that actually existed in ancient Greece, the Dionysian rituals, in order to write Bacchae. For us, the challenge was to follow the same path, that is, to build a “fiction” or choreographic interpretation of his theater play. In the frame of the creation of this show, I also read Nietzsche’s Birth of Tragedy. I was very touched by his thesis on the centrality of emotions and chorus, music and dance. I was also moved by the contemporary Hellenist Françoise Frontisi-Ducroux’ thoughts on the mask in Greek culture in Du Masque au visage. Frontisi-Ducroux was immensely interested in understanding how the myths, narratives, stories or textual tradition is translated into images, sculpture and vase painting mainly (as the frescos got lost), and how this was done. For instance, he looked at whether the face is frontal or in profile, how movement and subsequent actions are translated into a still image… a wonderful universe of aspects. Visiting Athens and its museums and archeological sites was also critical.

Then, there is the studio practice, where all the performers danced, sang and played on a daily basis. This enabled numerous discoveries.

Some of the feedback from the public is that the show engages them physically: they feel the chest pressed, legs light. Sometimes images not directly related to what they are seeing come across. Smiles take shape in their lips for rather long periods. The audience moves in their chairs or, conversely, they become medused – petrified, mirror effect, wet eyes, etc. This happens in the most successful performances. Having said this, some people may find the show, or parts of it, oppressive. Sometimes people faint or come close to that. In every case, the response is physical and empathic.

The show is a condensation of rather disparate materials and media, a surface of projection. My work was precisely crafting this object. As to what people take away from it, they are free to take whatever they like. Now that we have performed it more than 100 times, it is clear the reactions can be very wide.

Marlene Monteiro Freitas studied dance at P.A.R.T.S. in Brussels as well as at Escola Superior de Dança and Fundação Calouste Gulbenkian in Lisbon. In her native country, Cape Verde, she co-founded the dance group Compass and collaborated with musician Vasco Martins. Marlene has worked with Emmanuelle Huynh, Loïc Touzé, Tânia Carvalho, and Boris Charmatz, among others. Her recent creations include Bacchae: Jaguar (2015) with Andreas Merk, for which she won the Best Choreography award from the Portuguese Society of Authors; Of ivory and flesh—statues also suffer (2014); Paradise—private collection (2012-13); and (M)imosa (2011), co-created with Trajal Harrell, François Chaignaud and Cecilia Bengolea, which was presented at The Kitchen in 2012. In 2018, she created Canine Jaunâtre 3 for Batsheva Dance Company. She was awarded the Silver Lion for Dance at the 2018 Venice Biennale. Marlene is the co-founder of P.OR.K production company in Lisbon. 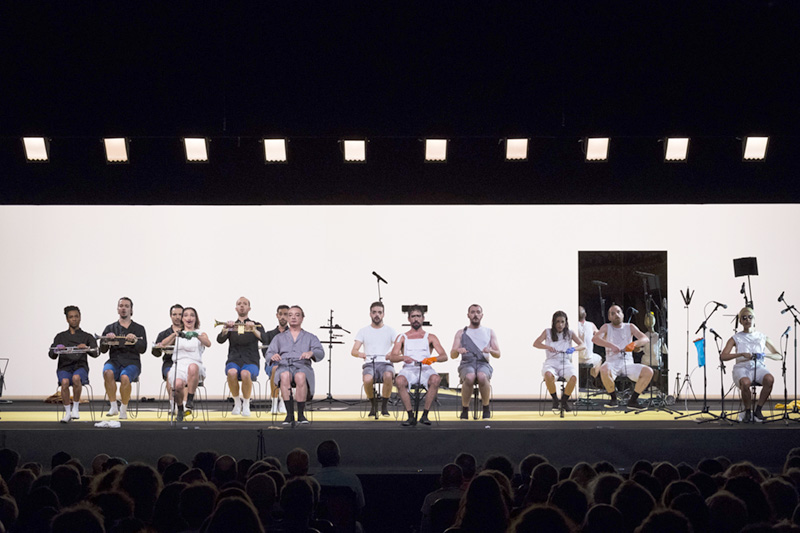