An Interview with Parvathy Baul

Among the most recognized woman Baul performers in the world, Parvathy Baul is a practitioner, performer, storyteller, painter and teacher of the Baul tradition from Bengal, India. She has performed in more than 40 countries, and is now creating a dedicated learning center for the Baul tradition in Bengal. Here, she describes her entrance into the Baul tradition, how Baul functions as both a contemporary and traditional form, and the challenges Baul faces in the modern world.

Parvathy is touring to the Bay Area and to Santa Fe, NM this fall. Check here for more information. 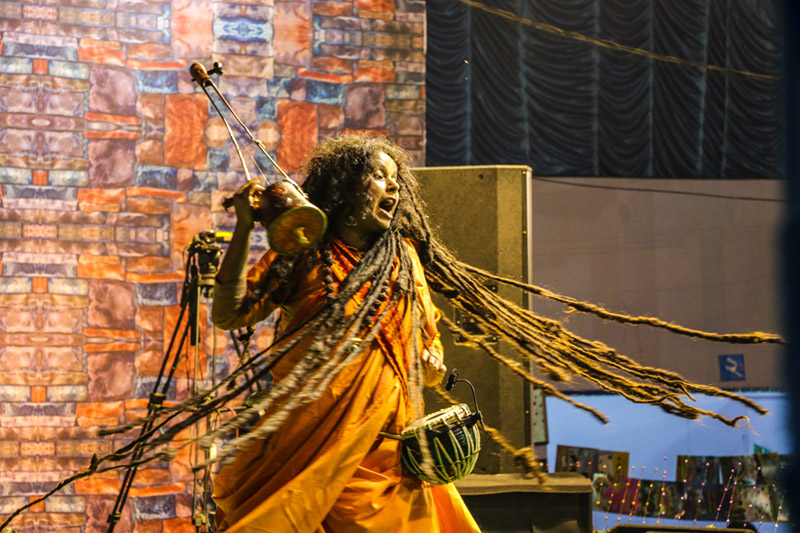 Can you tell me a little about your history – when were you first exposed to Baul music and dance, and when and why did you decide to pursue it seriously?

I was born into a family which was very interested in music, dance and theater. I grew up in an atmosphere where music was always a part of my life. However, it was me among my sisters and brothers who asked my father to dance. My father took me to a traditional dance school of Kathak, so I started learning from the age of three. Then my father thought to include music into my education, so music came after dance.

The Baul tradition was not active in those parts of Bengal. I went to study for visual art in Shantiniketan where I was first introduced to Baul music. I was deeply touched by the sound of the ektara; I felt a depth in that instrument. I was also deeply moved watching the Baul practitioners. I was 16 and started asking what it was that gives them the vastness in their voice and body.

Baul is integrated into the spiritual world. In Indian traditions, we do not separate dance, music or theater as techniques only. They are tools to transcend the levels of body and mind, and cross the boundary of mind. This can be difficult to understand for a modern way of thinking about art and music. You cannot explain it with logic. It’s something that goes beyond our physical mind.

That is the beauty of all these traditions where dance and music become a form of worship and a practice for life. They’re holistic. When we practice music, dance or theater, we don’t say you should learn only one; you must learn aspects of them all. In addition, dance and music are connected to spiritual texts, so you must understand those as well. You need to know everything of life to give completeness to the music. This is evident in Baul because it uses dance in the sense of body movement, music from instruments, and learning and memorizing the texts. You must embody the sound and internalize the songs. Then you bring that bigness into the body; if you just sit and sing it is not enough.

I started exploring all of this in the Baul tradition. It fascinated me how many layers one must prepare oneself before one is able to sing and dance. It was exciting – a lifelong process. I was looking for something to give me that lifelong work. I was not looking for a career, but for a process. And if I could help others with this process as well, that was most important for me. It was from that perspective that I pursued Baul. 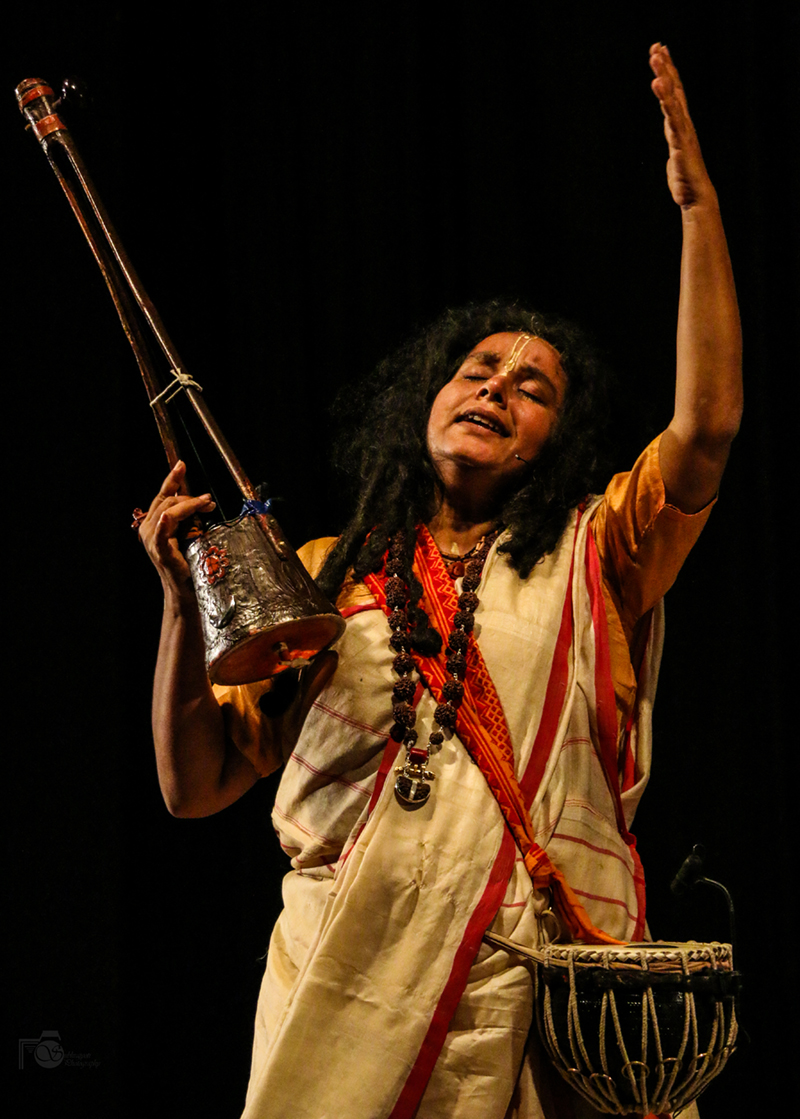 How would you describe Baul music and dance to someone who has never seen or heard it?

Baul is a yoga tradition, a very ancient practice. When I asked my guru, “Who is the first Baul?” He responded, “Shiva.” So the root of this expression goes back thousands of years. It is a complete expression that goes beyond what we can hold in our mind. If we try to limit Baul or define it, it becomes narrow. But Baul is universal and for everyone. That’s why Baul has included people from all castes and classes. At every point in time, Baul is inspired by different traditions: Buddhism, Sufism. It is a melting point.

The prayer and practice are through song and dance; it’s a way to communicate. It happens in gatherings of the village or the spiritual meeting in the ashrams. It used to be like a house concert singing simple poetry. When you speak with words, you need intellect to understand. When you use music and dance, you communicate through the heart. It’s experiential, not intellectual. After a song, the listener or spectator is transported to another level. The Baul say it can come only when the one who is singing and dancing is transported. Then they can take others along with them. That’s why my guru used to say you sing something you love. First, I must love for others to receive.

This is a simple way of saying that the use of body, music and instruments are only one thread. Baul is a minimalistic way of expressing many things. It can be something very pure. All you practice and do becomes minimal, but perfected. It is a way to experience spirituality through music and dance. It’s been well tested because it has been practiced for thousands of years. When I look at the lineage of the masters, my master is something like the 123rd generation. Baul is still around because it works even though we’ve gone through so many changes in our country and world. Still, the tradition continues because it has the capacity, power and depth to transmit and transfer something inside.

How has social media and the internet in general affected Baul since it is easier to share videos and recordings now?

When I first started learning Baul, I had to be present. I didn’t use a notebook, pen or recording machine. My master said that Baul must register mind, body and soul, so what is the use of writing it down? His way was very helpful for me to learn in the oral tradition. It’s very important in the oral tradition for us to depend on memory. Now, it’s also very helpful to have an archive to listen to the voices of the masters.

But there is the other side. Students are not committing to the tradition; they are not taking up the path and dedicating their life full time to be a Baul. That is the rule of the tradition – you must be initiated and live for a certain number of years with your teacher. When the teacher says you are matured, only then can you go ahead.

Now, everything is in video. If you have good skill in music and dance, you can copy it. But you can’t become the tradition. There are so many ways of just singing songs that aren’t committed or contributing to the tradition. Everybody wants to be a star, but the dedication to the practice is most important. 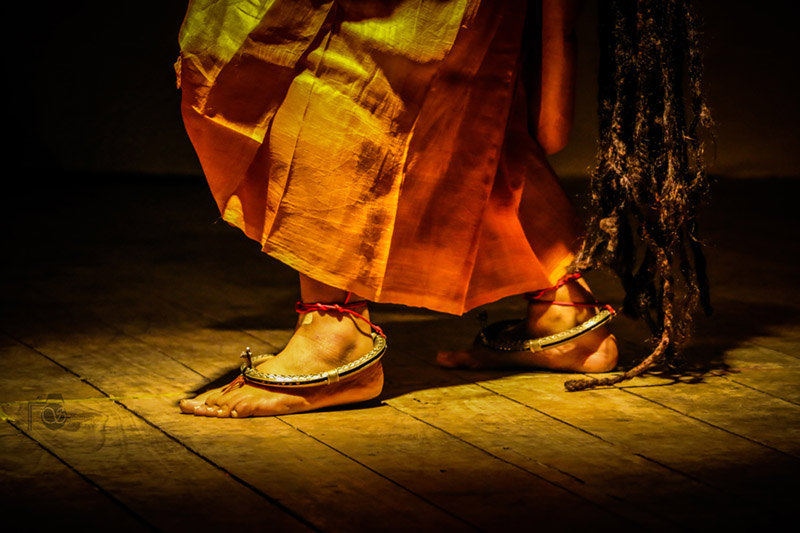 Do you believe that mixing more contemporary techniques with more traditional techniques endangers the preservation of traditional dance and music? Or is it important to contemporize/renew these forms for them to stay relevant?

I do not understand why Baul cannot be contemporary as it is. We are living in this modern time, and yet I am able to connect my life through practicing this form. And the people around me are getting something from it as well. Otherwise, why should they connect with me? When we think of tradition, we think of something old. As far as Indian traditions, they are living traditions. Our tradition is not static. After so many years of singing and dancing in the Baul tradition, you should be able to compose your own songs, a combination of music, footwork and body movement. When you create, you are not a person from 1,000 years back. You only create when you have something new to say. We do not copy; we are creating something new, so tradition does create new.

What types of venues do you most often perform in? How does the venue affect the presentation and experience of the music and dance?

Baul used to be performed in villages and ashrams, but it has crossed this boundary and now appeals to people all over the world. Baul masters travel to other countries. When other performers come to our land, they have to adapt. Similarly, Baul practitioners must adapt to what is available wherever they go. It is quite a cliché to demand that the tradition stays in its context. The tradition has traveled to meet other cultures, so it’s in the context of those other cultures. It cannot claim to be exactly the same. If a Western dancer comes to Bengal, I cannot offer a big theater. He has to dance on the mud floor of the ashram. I feel it is quite irrelevant to think that when the tradition travels out of its context, it loses something. If the practitioner is true enough, they can practice anywhere in the world because the tradition comes from human wisdom.

Do you want to share more about your upcoming concerts and workshops in California and New Mexico? What can audience members or workshop participants expect?

I perform solo when I travel in the US. I will be presenting five different concepts. The first is songs of 8th century Buddhist monks. The second is the story of Lalon, a Sufi practitioner from Bangladesh also known as Sai. He wrote thousands of very beautiful compositions based on his life. Then I will sing about the divine mother, which is a powerful side of our practice. Fourth, there’s beauty, an essential aspect of Baul and how it is communicated. The final part will be about the yoga – not the yoga you see in magazines, but the yoga that speaks to the mind, body and soul. I will incorporate some of my own compositions as well.

When I teach, I find it is difficult for people to remember so many words. That’s why I simplify the songs, making it one or two lines. The aim is how to use the voice and incorporate body movements to express a story. Basically, we’re working with the body and voice, and wow that can connect you to your soul, how it can become a prayer.

What are the greatest challenges facing the preservation and legacy of Baul?

There are so many challenges to preserving the legacy. It is difficult to have a mind able to be attentive for years on one purpose. It takes commitment. Everything is very fast now. The practice becomes diluted.

However, it is changing also because I have seen more of the young generation getting inspired. Many are quite modern; they’re working in mass communication and advertising, but they’re teaching their children to get back to the tradition, back to the storytelling. Communication is missing somewhere. The oral tradition can work only when that communication exists.

It’s more difficult to practice tradition in cities than in villages. People tell me it’s very easy when they’re here with me fulltime in the practice, but the moment they return to the city, the surrounding does not support this practice’s timelessness. People have so many doubts about things: How useful is tradition? How scientific? These are the biggest challenges to our traditions. We have started to believe in India that we need to have an explanation for everything, but so many things are beyond what our simple logic can reach.

For the traditional practitioner, it’s a great challenge. Two different worlds are coming together. But I think this was there in the old time also. It’s been true as long as there have been human beings. The difference is the span of attention and communication. 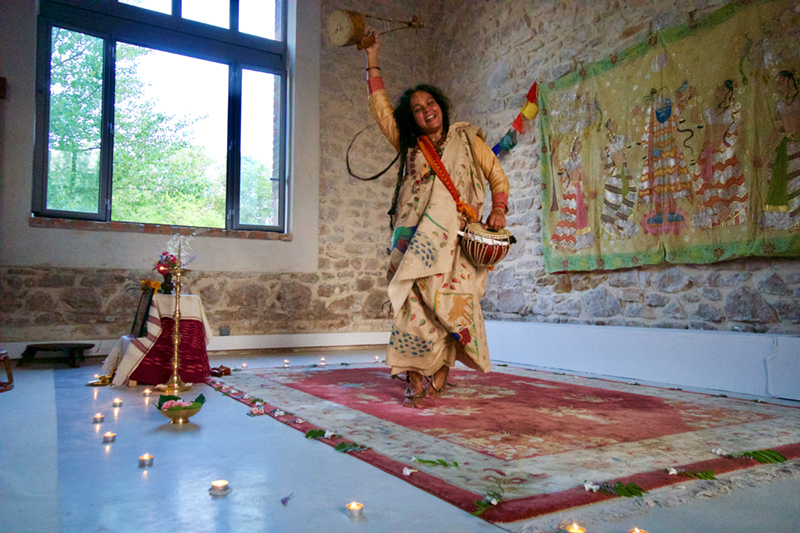 One Response to “Living the Tradition of Baul”