An Interview with Nia & Ness

Nia & Ness are a Black, lesbian, dancer-poet performance art duo based in Brooklyn, New York. They met and became a couple in 2013 and founded their company in 2016. They have performed at multiple venues nationwide, sharing their work that brings a deeper understanding of their co-reality through intense investigation of their individual identities. Here, they share their choreographic process and how their conversations and experience inform all their work. 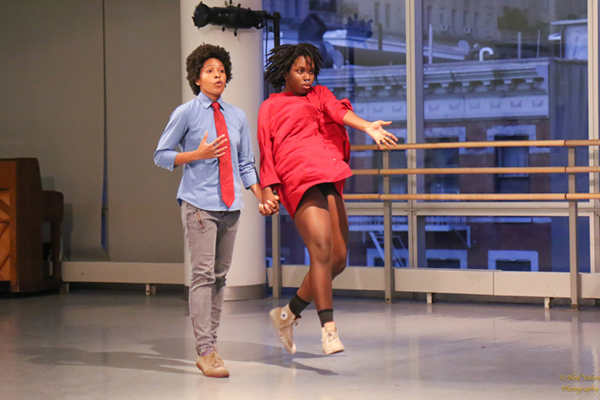 Can you tell me a little about your dance and poetry histories – what kinds of performance or writing practices and in what contexts shaped who you are today?

Nia: I started dancing around the age of five. Along with that, I also practiced martial arts and karate. Then 9/11 happened and my mom lost her job. She could only afford for me to do one activity or the other, and I was close to getting my black belt. So, I stopped dancing for three years and completed my black belt in the eighth grade. In tenth grade, I transferred to a public school with dance classes, so I started taking dance instead of going to gym. That’s when my professional training began intensively.

I went to Temple University in Philadelphia and got a BFA in dance. After I graduated, I left and danced in DAGADA Dance Company based in Freiberg, Germany. We performed in Germany and France. In 2015, I came back from Europe, and we were living in New Jersey. I started auditioning for other projects and companies, but wasn’t getting in because of how I looked, being a dark-skinned Black woman who has natural hair and a curvy body. When I would get jobs, nothing felt right on my body, like I was forcing it to do things I shouldn’t be doing.

There was a call for artists on Dance/NYC looking for dancers to respond to the theme “She Who Tells A Story.” I told Ness, “We have a lot of stories to tell. We should create something.” That was the beginning of bringing my dance and Ness’ poetry together as a company.

Ness: When I was younger, like eight years old, I wrote a lot of poetry, mostly focused on rhyming. When I was 14, I started writing raps. I went to SUNY Plattsburgh in upstate New York for college, which is where I did my first performances at open mics, but it sounded more like rap than spoken word. After college, I moved back to southern California, where I’m originally from. I would do open mics here and there, but eventually stopped performing. However, I was always writing.

I got into a relationship, moved to Philadelphia, started school at Temple, and ended my relationship. I was taking a class on Audre Lorde, which is where I met Nia. I created this poem for the class final project, and I asked Nia to dance to it. That was the initial spark in us working together. We created work together a year after that for the student dance concert at Temple. It was a piece about our relationship: the good, bad and ugly. It fell on our one-year anniversary, and we were the first lesbian couple to perform on that stage, which felt groundbreaking. We performed again the year after for Nia’s senior thesis on racism in Philadelphia. And then it wasn’t until the “She Who Tells A Story” show that we made our next piece together. 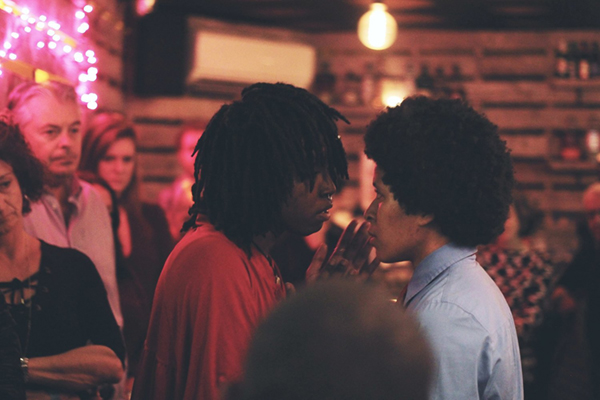 Nia: I would say our work is intimate and powerful. It shows our resilience and our love. All our work is basically as if the audience is like a fly on the wall sitting in on a conversation we’re having. It’s very personal about our lives and our experience living in the world today.

Ness: Our work is equally dance and poetry driven. We’re having a conversation about our lives in two different languages: poetry and dance.

Can you tell me about your current piece, home., and its guiding themes or concepts?

Nia: We realized we had more to say and decided to create new work based on those previous works. With opened wounds, we found we had more to unpack. home. is about our physical bodies, the similarities and differences between me – who is a curvy, dark-skinned Black woman and who is feminine-presenting – and Ness – who is a lighter-skinned Black woman and who is more masculine presenting. We delve into the historical lineages in our bodies, the trauma in our bodies, and what that does to our physicality.

Ness: run. talks about the traumas we go through, but home. pinpoints and zones into those traumas.

What does your choreographic process look like, either more generally or specific to home.? How do you integrate poetry into the choreography, or vice versa? 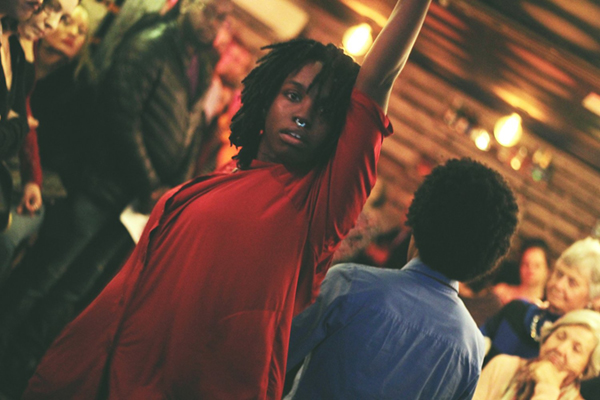 We usually start with a conversation we’ve had several times before in different circumstances. We realize we’re talking about the same thing over and over again, just with different shapes and colors. We talk about common themes for the work, and then we separate; Ness will start writing, I will start creating movement, though not necessarily at same time. Then we come back together and share what we’ve created. We make sure each other’s stories are being represented correctly. If we don’t feel like they’re being represented, we go back and search some more.

Once we have a solid base, we will go to our musician, Garrett Miller, and share what we have, the theme, and how long we think the piece will be. Then he will go and create music, send us a minute or two draft to listen to, we’ll say yes or no, and then he’ll go complete it.

That was the process for both run. and home. The big difference is run. was created at the Brooklyn Arts Exchange, and home. was created in our literal home.

Ness: The conversations about home. started in the spring of 2018. But the length of time it takes to develop a piece really depends. The shortest amount of time has been two to three weeks, and the longest time is months. We’ll get somewhere with the piece, realize it’s not what we need it to be, and go back to the drawing board.

Nia: In run. and home., we each have solos we developed individually. We won’t see each other’s solos until the premier of show. When it came to home., I was procrastinating because I didn’t want to open myself up and see what I had buried for so many years. I only finished it two days before the premier. I had the music; I told Garrett what I wanted, and it was perfect. I would listen but avoid choreographing. The music brought feelings up that I didn’t want to address. It’s different working alone than together because we’re so close… There’s something about having that protection or safety. Choreographing that solo, there was nobody to hold me accountable, so I waited until two days before the premier. I think it happened the way it needed to happen though.

Speaking more generally, are there certain themes or issues that feel important to you to keep tackling or addressing in your work?

Nia: The reason why we do what we do is because we didn’t see ourselves being represented as Black lesbian women anywhere. If no one is going to tell our stories, then we will tell them ourselves. All our work is around that and what we go through daily, as well as the space we hold for each other. It’s how and why we keep going.

Ness: It doesn’t stop. The things we go through just fuel more and more work. home. is not our last piece. 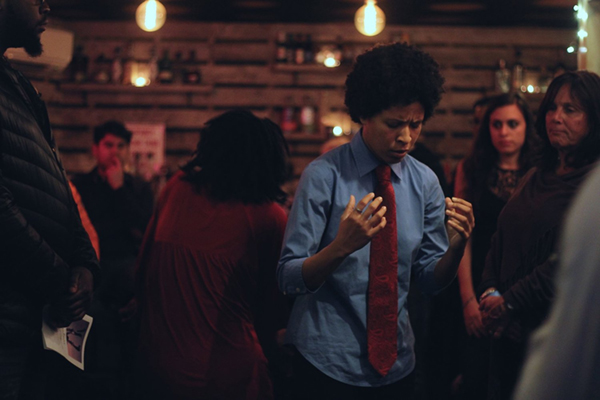 What do you hope audiences take away from home.?

Nia: I hope it will help audiences examine their own homes, to go within themselves and really do that healing. Also, to make sure they aren’t destroying someone else’s home intentionally or unintentionally.

Ness: I want people to know they’re not alone; that’s helpful to know.

Nia: We’re just focused on being honest about what we go through on a daily basis. It just happens to be universal. We’re not trying to speak to everyone; we’re just telling our truth.