An Interview with Natalie Benally

Natalie Benally is a Dine, Zuni, Ute and Mexican woman and a dancer with Dancing Earth, an Indigenous contemporary dance company respectfully based in Ogaa Po’ogeh – occupied Tewa territory known as Santa Fe, NM, and Yelamu – occupied Ohlone territory known as San Francisco, CA. Here, Natalie discusses her performance trajectory and her desire to create narratives centered on the contemporary Native experience. She also reflects on her roles in Dancing Earth’s upcoming production Between Underground and Skyworld. 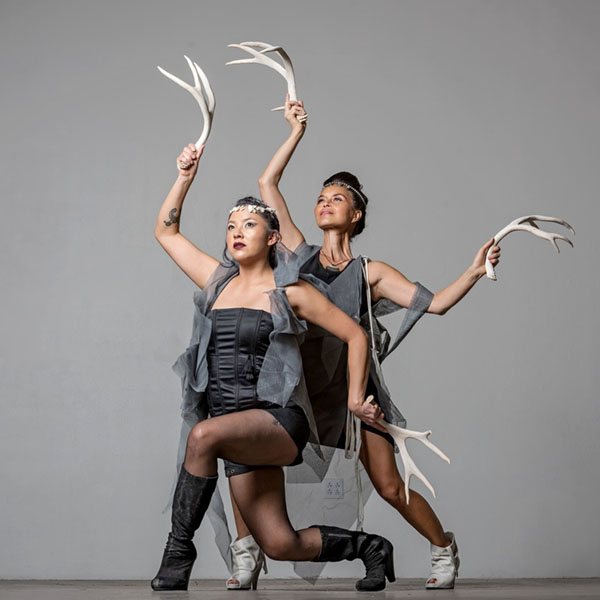 Natalie Benally and Rulan Tangen in Between Underground and Skyworld

Can you tell me about your dance history and what shaped the dancer you are today?

I was born and raised on the Navajo Reservation just outside Gallup, NM. I always had an interest and like for performing but didn’t have anywhere to pursue it. There were no studios in town or ways of accessing performing arts programs even though I had a deep passion and appreciation for it. I grew up singing in church because my dad was a minister. That was my way of performing. I also did random school plays. It wasn’t until high school when I decided to really pursue a performance career of some sort. I was drawn more to theater and acting at first, but still loved to dance. I would practice dance behind this hill away from my house. I would take a CD player and would dance away from where anyone could see me.

When the internet became more popular, I started watching videos online. I loved Michael Jackson. I’d imitate the movements and put them on my body. That’s how I learned at first, thinking, “I think this is how it goes.” I am self-taught, particularly in urban styles and hip hop. I did that for many years.

Then I went to college and was truly embedded for the first time in theater and dance. I went to Fort Lewis in Durango, CO. It was accommodating financially because I got the Native American tuition waiver. I was very good at science in high school and did a lot of environmental justice on how invasive plants were disrupting my homeland and the water source. That got me scholarships to go to school, but eventually I changed course and majored in theater. That was the first time I was in a program where I learned performance techniques. I was craving that knowledge. I got involved with a club on campus called Dance Commotion where people got together and would choreograph routines and then present them at end-of-semester showcases. I saw a showcase at the end of my freshman year in 2006 and wanted to join, so I tried out and ended up making a lot of great friendships. It was my first dance community.

After graduating, I didn’t do any theater or dance for two years. I didn’t really have a plan. I went back home and had my daughter who is seven now. After a while, I started teaching dance classes voluntarily at my old high school. I pitched it as something for kids to do for fun, and the school said sure, go for it. That’s when I started teaching and saw how much movement and dance were helping the students. Some were challenging or difficult students who were coming to me to learn how to dance, and they really enjoyed it.

I discovered I liked teaching and working with young people, so I went back to Fort Lewis to do their Post Bacc teaching program. It’s for those who have bachelor’s degrees but not teaching degrees. I went back in the fall of 2014. A year into doing that program, Rulan [artistic director of Dancing Earth] did a collaborative project with the theater program. Someone had mentioned Dancing Earth to me maybe a year or so before that. I wanted to get back into dance and performance, so I auditioned for the show, and I’ve been dancing with Dancing Earth ever since.

Dancing Earth has been a great fit for me. A lot of times when I tried to pursue acting and dance, I was met with type casting. I didn’t look Native enough even though I was born and raised in my culture and language. I was told to play an Asian or Mexican role because I didn’t look like a Hollywood Indian. It was frustrating, and I got discouraged. I wanted to represent my people. I noticed how there’s not a lot of content out there for Native actors or artists in general. Rulan has fostered this community for Native artists from all over who are able to bring their love for their craft as well as who they are culturally. When I met Rulan, it was so refreshing. I thought: This is what I’ve been wanting, to bring my theater and dance self to my Native and Indigenous self.

How would you describe contemporary Indigenous dance to someone unfamiliar with it?

In terms of the style and what we do, it’s very much related to storytelling. Many years before companies or theaters existed, dance and theater has been a storytelling tool. A lot of what we do is tell our stories using movement, but it’s generated through stories that have been carried for generations. It’s also derived from nature. Intention is important in contemporary Indigenous dance; every movement has purpose and represents an idea, a feeling, a legacy. It’s not just beautiful movement. A lot of what we do in Indigenous contemporary dance is not only tell stories that we carry from our people, but we embed our own stories. The work is very collaborative. There’s not just one person calling the shots. It’s a sharing and trading of movement that always asks: How do our movements work together? 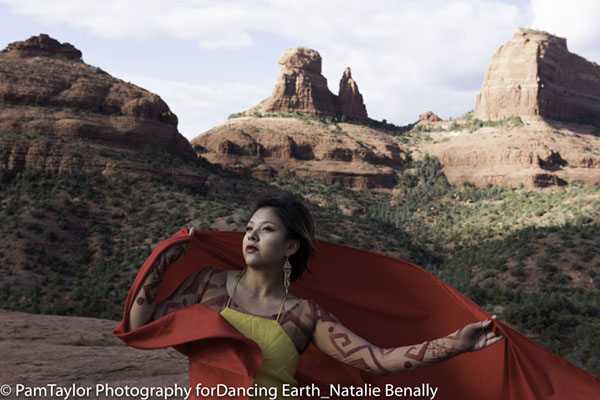 What does your dance practice look like these days?

I grew up dancing on the land; my first studio was my mother’s land. I danced among dirt, mountains and trees. When I go home to visit family, I still go to the spot behind the hill where I know no one can see me dancing. I let the land inform my movement and what I do with my body.

Now I live in Santa Fe, though I take classes in Albuquerque once a week, especially hip hop and urban styles. I rehearse regularly with Dancing Earth. I also do as many workshops as I can. I’m all about learning, and I don’t like stagnation. I’m always seeking to learn from as many people as I can. I’ve done workshops in Phoenix and Los Angeles so I can continuously feed myself in terms of how my body evolves as a dancer. My spirit and my mind evolve as I go through life, so I believe I should continuously progress in some way, whether that’s through dance or a new project.

Lately, I’ve been choreographing and directing. I did my first full-length dance production this past fall at Fort Lewis, my alma mater. With cast and crew, there were maybe 15 people involved in the production. I’m interested in doing more creative direction and choreography. A lot of my journey has been looking for content representing someone like me who lives in this world as a modern Native. So why not create the content and make it happen?

Can you tell me about your involvement with Between Underground and Skyworld?  What has the choreographic process been like?

This will be the second production I will have worked on with Rulan. The first one was SEEDS Regeneration that just finished its run with a performance at the Kennedy Center. That was my first experience being collaborative in a big way. This time, I’m helping create content and choreography. I’m collaborating a lot with the other dancers on the overall feel of the piece. Between Underground and Skyworld is about the generation now. SEEDS was about stories gifted to us by elders. This new show is about our stories as contemporary Natives.

There’s a lot of hip hop infused into it which makes me happy since that’s my home in terms of movement. I’m working with other dancers in creating movements, sequences, and intentions in different characters. I’m working in a lot of my cultural teachings as well. I’m very fortunate to understand and speak my Native language. I still have knowledge of some stories. It’s my first time working with younger Navajo dancers who weren’t able to have that experience growing up. It’s interesting to be a cultural carrier in that sense.

I won’t be able to actually dance in the production for a while because of my full-time job. In Dancing Earth, we alternate roles because everyone’s schedule is all over the place. A lot of us are learning multiple roles. Each person brings our own flair and intention to each role. That makes the choreography ever changing and evolving.

What do you hope audiences take away from Between Underground and Skyworld?

I’m excited for this one. I hope to relate to younger audience members. We hear the stories of our elders, but this is a chance to bring forward our stories. It’s important because there are a lot of things that specifically afflict our generation, like environment and identity.

I’m in the middle; I walk in the world of my culture, traditions and ancestors, but I also walk in the world of living in a contemporary consumeristic society where I have a job and pay bills. I’m very much interested in this perspective of the person in the middle who must balance both sides. I told this to Rulan, and she said I basically just described what this show is about. A lot of us are in the middle who carry our heritages and then do a job that maybe conflicts with where they are from. That voice doesn’t get heard often. It’s a chance for young people to see and hear that voice.

Dancing Earth functions differently than most dance companies. Community is really important. We strive to make sure that everything we do filters and gives back to community. Wherever we go, we give land acknowledgements and build relationships with the people who live on that land. It’s not just about us being performers going around to do a show. We ask: How does our presence and our work benefit the community, and how do they benefit us as performers? There’s power in involving community, and it’s an important part of who we are as a company, whether on a big or little scale. 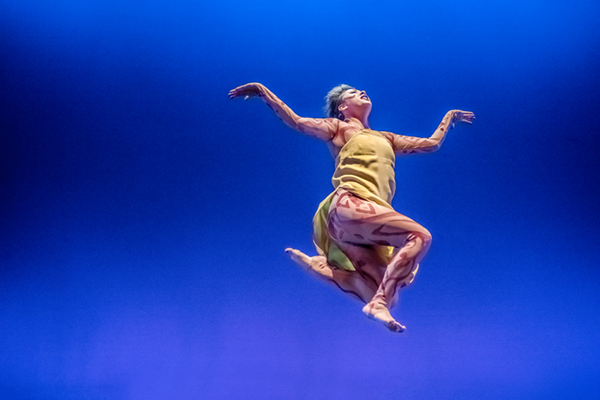 Natalie Benally is a Dine, Zuni, Ute and Mexican woman who holds a bachelor’s degree in Theater- Performing and Directing from Fort Lewis College. She has been performing dance and theater for the past 10 years. She studied at the Dancing Earth Summer Institute and joined the company for tours of the US and Norway. Some of her most notable work includes lending her voice to the lead role of Dory in the Navajo dubbed version of Disney/Pixar’s Finding Nemo and directing/choreographing a devised production entitled I’m Native And… for Fort Lewis College’s inaugural Indigenous Arts Festival. Natalie works as the Indigenous Programs Coordinator for the non-profit organization Girls Incorporated of Santa Fe.