An Interview with Anne Pesata

Anne Pesata is a dancer with Dancing Earth, an Indigenous contemporary dance company respectfully based in Ogaa Po’ogeh – occupied Tewa territory known as Santa Fe, NM, and Yelamu – occupied Ohlone territory known as San Francisco, CA. Anne is Jicarilla Apache from Dulce, NM, and was raised traditionally by her family on the Jicarilla Apache Reservation. Here, she shares her dance history and how her movement choices are derived from her cultural understanding and appreciation for the natural world. She also discusses her role in Dancing Earth’s upcoming production Between Underground and Skyworld. 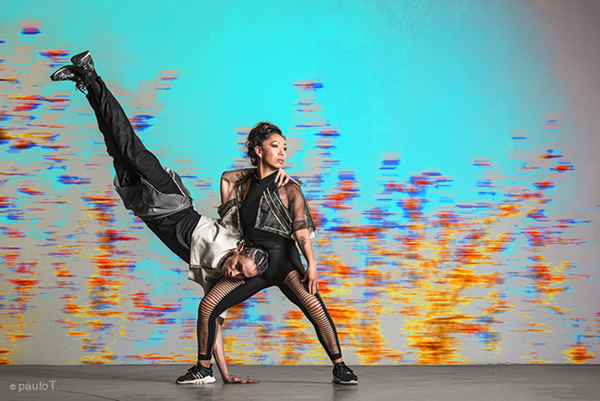 Anne Pesata with Raven Bright in Between Underground and Skyworld

Can you tell me about your dance history and what shaped the dancer you are today?

I started dancing formally when I was six. I was a powwow dancer for many years, all through my teenage years, before I got too cool. I stopped dancing altogether until I was in college. I was a closet dancer and explored music, primarily hip hop. In college, there was a space for dancers to be in choreographed performance pieces and then present them at the end of the semester. It was open to all levels of dance; anybody who wanted to be a part was included. That’s where I got experience choreographing and performing and started building my comfort level onstage.

During that time, Rulan [artistic director of Dancing Earth] toured to my college in Durango, CO. I was fascinated with what she and her dancers were doing. I had previously worked with Rulan when she had toured to my elementary school in third or fourth grade. She remembered me from back then, as well as some of my classmates by name. I was taken aback that someone who was performing and touring on a national level remembered my name. She invited me to the workshops associated with that tour in Durango and later invited me to audition for the company’s summer intensive in 2012.

What has been your involvement with Dancing Earth?

I started as an apprentice and I just worked as somebody in the background for a few years. However, I tried to be involved as much as I could and said yes to every opportunity offered to me. In 2014, I was able to tour with Dancing Earth to Durango and was offered the position of company member. So it took two years to build enough skill and comfort level to where I felt like a dancer. I guess I would say that the way my body moved was very awkward and, by 2014, I had developed my own style. I was one of the core dancers for that particular tour back to Durango. Since then, I’ve been a lead female member, if there were a hierarchical structure. I’ve been involved in most of the major tours and I’ve travelled to four different countries as well as across the US.

How would you describe contemporary Indigenous dance to someone unfamiliar with it?

I often explain it as a deconstruction of other deconstructions. So if ballet is at the pinnacle, you break the movement down to contemporary. But contemporary still has many forms and uses French terminology to describe many of the movements. Then, if we break it down further and lose that structure, we find a movement that is more primal without the colonial structures.

Contemporary Indigenous dance is rooted in storytelling and the places that the story comes from. It doesn’t always emanate from the same place in the body. There’s a lot of initiation from the core and spine; the positions of the arms and legs are less important in the storytelling. A lot of our movements come from nature.

What does your dance practice look like these days?

I don’t dance as much as I used to. My closet dancing to hip hop music has developed into performing and competing publicly in the hip hop community. I dance at practice with Dancing Earth, and I dance for performance. Otherwise my time is eaten up by my 45-minute commute to my eight-hour job. There’s less free time for dance and to soak up the joy that it brings, which is kind of sad. 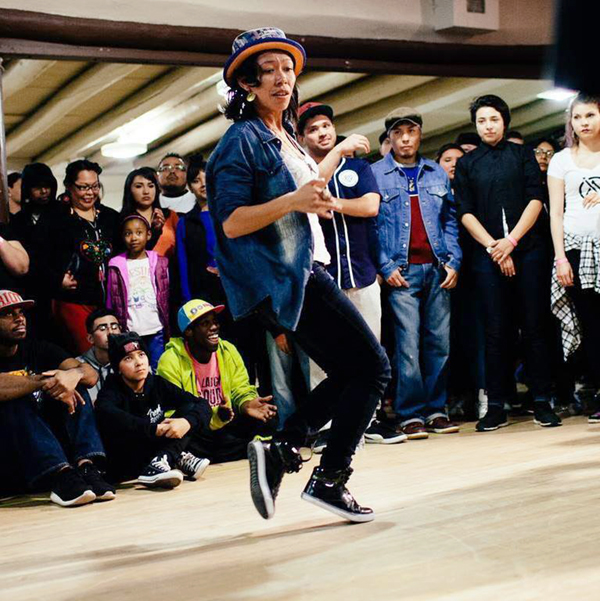 Can you tell me about your involvement with Between Underground and Skyworld? What has the choreographic process been like?

There’s a basic storyline and set of events that guides the piece. All the in-between stuff is a collaborative effort where Rulan will give us initiators and cues which we explore with our bodies. That informs what becomes choreography. She has included me in that process because I don’t have the body-memory of being trained in any specific style like ballet, break dancing or martial arts. My body moves in a way that is informed more by the story and less by any specific dance training.

My cultural background also informs my movement. I am Jicarilla Apache; I come from people who are hunters and makers. A lot of the stories I know and have lived are from that background. In Between Underground and Skyworld, different characters have different attributes. The character I’m portraying is a protector of animals as well as the person who goes first to make sure everything is safe for the people who follow. Maybe it’s the equivalent of a scout, or a leader who is concerned with safety and puts themselves first.

Part of being from a hunting people is living in harmony with animals. Even though one of our actions is taking the life of an animal, there’s so much respect toward that animal. We’re aware of not over-hunting and respecting the populations and family structure, so not taking mothers from babies. There’s a holistic aspect from my people that leads to a deeper understanding of what it is to be a protector of animals.

The movement of my character in Between Underground and Skyworld is an almost aggressive and defensive movement at the same time. I’m charging forward to clear the way, almost like a machete through tall grass to clear the way for those who come after. I use strong swift movements and lots of angular motions.

What do you hope audiences take away from Between Underground and Skyworld?

One of the main things I’d like people to take away is that the world and our experience in it is so much more dynamic than the dimensions we see in our day-to-day lives. There are stories in rocks, for example, that aren’t remembered or we don’t understand, but they are still there and they still mean something. There’s magic in water, in place. Our relationship to the natural world should be as rich and dynamic as the environment itself. Our connection to that landscape and those who came before us is written in the stars. There’s a lot of knowledge there as well. We are often the connection between worlds because we are the stories both ancient and of the future. Our stories will write what will come.

Rulan is one of the main reasons I have a career in dance because she’s put so much faith and confidence in me. She’s taught me to trust my movement. She’s helped me build stage presence and a connection to story that I now take into my other dance practices. When I met her, I would not have called myself a dancer, but I do today.

Also, Between Underground and Skyworld is designed so multiple dancers know multiple roles. Two dancers portray my role and collaborate on how it’s developed. With every place we tour, the cast changes depending on who’s available. One thing I love about that process is we never perform the same piece twice. 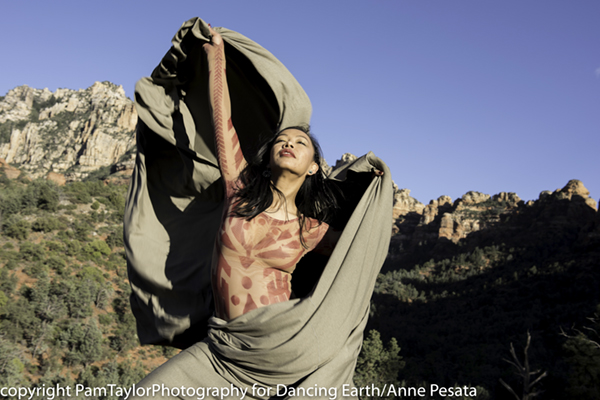 Anne Pesata is Jicarilla Apache from Dulce, NM, and was raised traditionally by her family on the Jicarilla Apache Reservation. Her relationship to dance and her movement choices are derived from her cultural understanding and appreciation for the natural world. She began dancing as a powwow dancer at six years old and has since then delved into hip hop and other expressive dance styles. She has been working with Dancing Earth as a dancer and cultural ambassador since 2012. In doing so, she has traveled as a touring artist to four different countries and numerous cities across the United States.