Here’s an interesting fact: One in four people in the United States have a disability that impacts a major part of their life according to a 2018 report by the Centers for Disease Control and Prevention. That’s 25 percent of the US population. Suffice it to say, I have been in few dance environments where dancers with disabilities comprise at least 25 percent of those present.

In the past few years, I’ve become more and more intentional about including voices on Stance on Dance that have been historically marginalized in the dance field. That includes people who identify as non-white and perhaps practice dance forms outside the Western classical/contemporary paradigm, people who identify as women – and who are too often sexually mistreated and kept out of positions of power, people who identify as gender-nonconforming – and whose experience and value is often unacknowledged choreographically, and of course, dancers with disabilities.

When Alice Sheppard invited me to see her touring piece DESCENT in 2017, I was unable to do so but suggested an interview with her instead. I had known Alice from my experience dancing with AXIS Dance Company in 2009 in a piece choreographed by David Dorfman. Alice had since become an independent dance artist, and I was intrigued to learn more about Alice’s journey creating and touring a piece that was specifically choreographed for two women in wheelchairs exploring the relationship between Venus and Andromeda based on Rodin’s sculpture.

After the interview, Alice shared with me her general frustration with the press. At that point, DESCENT had not yet been reviewed, but from her years of experience working in AXIS Dance Company and then as an independent dance artist, she recognized a pattern in which reviewers, dance writers, and scholars in dance and performance studies tend to focus more on disability when writing about disabled dance artists, rather than on their art. She suggested I write about this, and I thought it was an intriguing idea to dive into.

In 2017, my book, Beauty is Experience: Dancing 50 and Beyond, came out. By focusing specifically on aging in dance, I was beginning to have more awareness of access and representation. However, I’d say overall that the book was generally feel-good and inspirational. Here, Alice was proposing a different narrative: Where is the inspiration coming from – the fact that the aging (or in this case disabled) person is dancing, or because of what they have to say?

My friend Silva Laukkanen is a passionate advocate and ally for dancers with disabilities and has taught extensively in physically integrated dance. For the past couple years, she has also been producing the thoughtful podcast, DanceCast, where she interviews a myriad of dance artists. My intuition in asking Silva to join me in this budding project was first that she had extensive connections in the disability dance community, as well as that she had more knowledge of disability culture than I and could perhaps help me not make too many ableist pitfalls. Plus, she’s wonderful to work with.

I thought we could format the project similar to the Dancing Over 50 Project: ask a set of questions to a broad group of dance artists with disabilities and, through that process, create a portrait of their collective experience. The list of questions we created focuses on not only each dancer’s history and practice, but also their experience navigating assumptions, press, educational opportunities, language preferences, and assimilation. Our questions demand a working knowledge of the dance world, and so the focus of our project became professional dance artists with a significant amount of experience who could reflect on the state of the field.

As we dove into the research, our list of potential interviewees grew. Silva and I are aware that the word “disability” does not encompass one experience, and thus have tried to include not only dance artists with different disabilities like those who use a wheelchair, use crutches, are Deaf, have an intellectual disability, etc., but also dance artists from various genres as well as different racial and gender identities. Thirty years ago, the most visible dance artists with disabilities were mainly white women in wheelchairs doing contemporary dance. We also wanted to honor and include those who paved the way before there was an Americans with Disabilities Act, even if that meant many of our interviewees would be older white women practicing contemporary dance.

Our selection of interviewees thus reflects larger conversations on racial and gender representation, as well as conversations about access not only in terms of ramps and interpreters, but also socio-economic access to attend dance classes and performances. There are many intersections to keep in mind in this project. We also acknowledge that Silva and I are both white, cishet, able-bodied, upper middle class, and well-educated, as well as donating our uncompensated time and energy to attempt to hold a conversation we believe should be happening in dance.

What exactly is that conversation? To boil it down: If dance is art, and art is expression, and expression is predicated on experience, shouldn’t a breadth of experiences be highly sought after and valued? Most dance environments are fairly homogenous and scripted. The intersection of dance and disability feels like the perfect place to tackle this problem. Dance is of-the-body by definition (meaning it doesn’t depend on an instrument, paintbrush or camera). An art form that acknowledges the reality of the body and its many manifestations might be more successful in having something to say that honestly and profoundly reflects how we live, rather than hanging onto an ideal very few people fit into for such a short amount of time.

These next few weeks, I hope you take the time to read Stance on Dance closely. We have interviewed (in alphabetical order) Marc Brew, Antoine Hunter, Laurel Lawson, Kitty Lunn, Toby MacNutt, Hannah Sampson, Alice Sheppard, Mark Travis Rivera, Evan Ruggiero and Liz Winkelaar. This is just the first round of interviews. There are others we would like to interview before this project finds completion. Liz Brent, a good friend and talented visual artist in San Francisco, is creating beautiful original illustrations of each dancer to complement their interview. After Silva, Liz and I have completed enough interviews that we feel we’ve adequately covered the multifaceted perspectives on this topic, we will turn it into a book. We are far from done!

We hope this project provides each reader with the opportunity to give some thought as to what makes art truly inspirational, what makes technique useful and beautiful, what assumptions are commonly made about dancers’ bodies, and what a dance world that acknowledges, embraces and celebrates having 25 percent of its population have a disability might look like. 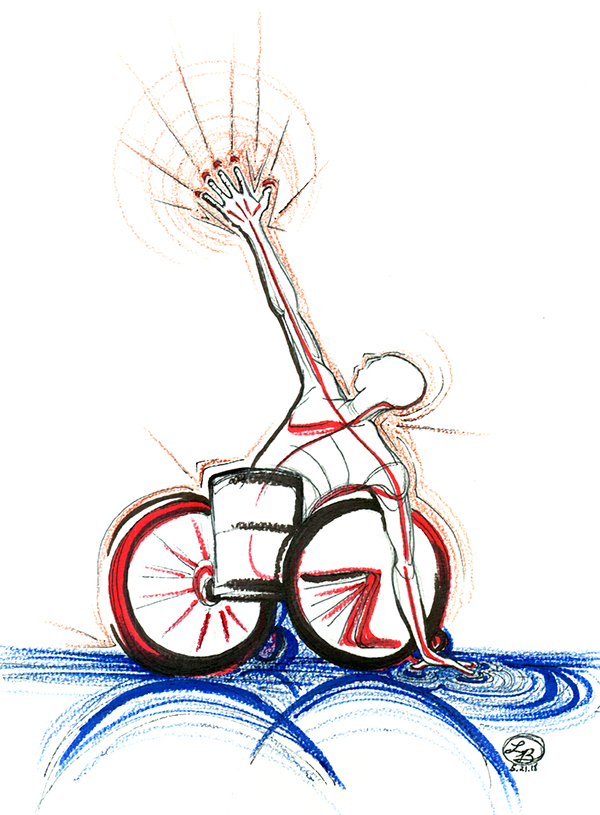 3 Responses to “Discussing Disability in Dance: A New Book Project”