There’s no denying that different environments – big cities, small towns, countryside retreats, even different geographical areas like foggy coastlines or expansive deserts – create different experiences of pace and space. There’s the rush of millions of people moving in multitudinous directions in large metropolises, versus the trickling traffic of a sparsely travelled road, or even bright sunshine announcing morning versus slow gray gradations announcing day. These are, in part, why we feel attached to different spaces: because of the movements that come to define them.

How we perceive time and space is, of course, central to how we dance. It’s little wonder then that Western culture’s mainstream perception of dance, which seems to be most often associated with big cities, is characterized by agility, swiftness and tricks. The land of the skyscraper demands faster, bolder, sleeker.

But the first dances happened on dirt. They reflected the lifestyles, needs and emotions of the people who created them. That feedback loop still exists, but the conversations examining how our dances are byproducts of our lives, and by extension environments, seem to happen less often.

My purpose in bringing up these considerations is to introduce another round of one of my favorite interview series: Where Dance Is. I relish the opportunity to speak with dance artists living in smaller cities and towns not well-known for dance, who are making rich contributions in their respective scenes. Look for these interviews the next couple weeks on Stance on Dance, and feel free to read some of the archived articles too.

When I first moved from California to New Mexico, I felt I had to justify (mainly to myself) my decision to move away from a big dance scene like San Francisco to a little dance scene like Santa Fe. But as four years have gone by and I’ve become increasingly embedded in the dance communities in Santa Fe and Albuquerque, I’ve noticed my dancing shift for the better.

I have to take much more responsibility for my dance outcomes in New Mexico because, if I don’t, they won’t exist. There is not a large number of classes for me to drop in on, nor a series of choreographers for me to work with, nor an abundance of venues for me to perform in. I never thought of myself as a choreographer in San Francisco, whereas now I have become one out of personal necessity. I’ve also started teaching improvisation classes at the local senior citizen centers. And I’ve gotten into forms like African and contact improv that broaden my practice, which of course would have been great to do in the Bay Area as well, but there were hundreds of classes and workshops to choose from, not just a few each week. I find it wonderfully ironic that I’ve taken on a more diversified practice even though I have less options.

On the other hand, there’s the internet. It used to be said (though perhaps still is) that pursuing dance outside a few major cities just wasn’t viable. The internet is changing all that. Social media and multimedia are shifting the nature of marketing and performance, and streaming makes it possible to rehearse from different countries even. For me personally, running Stance on Dance allows me to feel the pulse of the larger dance world from my sun-lit desk overlooking my garden. I sense that I escape small-town myopia by soliciting interviews and engaging in discussions outside my direct circle.

And let’s not forget the cost of living in places like New York, San Francisco or London. In my 20s, it felt rather glamorous attempting to “make it” in the big city, provided my parents were a call away. It was a time of incredible growth and experience. However, with each new financial responsibility, I felt like a buoy at sea pulled further down into the water, and I wasn’t even trying to buy a house or have kids. How is a dancer supposed to take on ordinary adult responsibilities when the cost of living is prohibitively expensive? It’s as if “dancer” existed outside the realm of social demands and economic timelines.

Finally, in this rambling case for dance anywhere but an urban jungle, I often come across this attitude in my colleagues and peers of “Where should I live that gives me what I want and need?” Of course, that’s always a consideration on some level. But for those of us who have complained about the stereotypes associated with dance, or lamented access, or wished more “non-dancers” knew much or cared about dance, perhaps it’s time to stop working in expensive, exclusive spaces, and ask ourselves instead: “Where and how can I have the most impact?”

If I sound preachy, forgive me. I just really believe that by altering the pace and space of how and where we dance, whole new worlds might open. 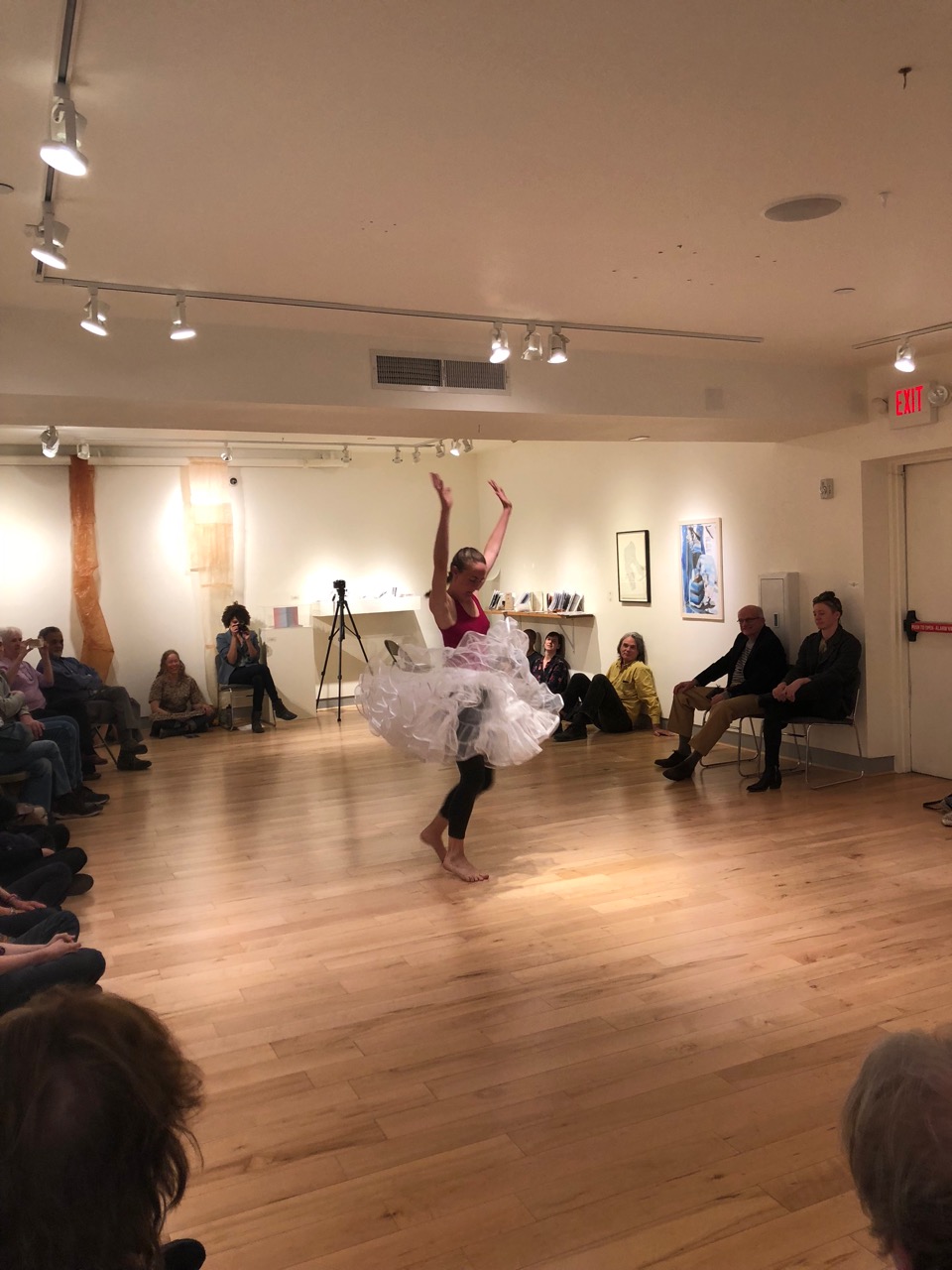 My recent performance at a gallery in Santa Fe

2 Responses to “Pace and Space”