An Interview with Trina Mannino

Trina Mannino is a dancer and dance writer in New York City who currently writes for The Dance Enthusiast and Dance Europe. In this interview, she shares her perspective on dance writing, the strengths and weaknesses of the field, and how it might reach more people.

I liked to write as a kid, but I never thought I would write about dance. While I was doing my undergrad at the University of Michigan, I started writing for the school paper on a whim because they needed more women. I was writing about television; they didn’t have a dance section. They had a fine arts beat though, and one of the editors liked dance. When she found out I was a dancer, she told me I was welcome to cross sections. Though The Michigan Daily didn’t do reviews, it was a great entry for me into writing. My interest grew from there.

When I graduated and moved to New York, I was looking for work that was flexible. I soon found out dance writing doesn’t always pay, but it was interesting to see the form from the writer’s perspective. It was also a great way for me to get to know the New York dance community. Being in my early 20s at the time and not having a lot of money, I enjoyed being able to see many shows by writing about them.

When I saw there was a dance writing course offered by Dance Theater Workshop, now New York Live Arts, I jumped at the chance. It helped me shape my voice as a writer, as well as taught me how to look at and think about dance critically. Through that course, I was introduced to Christine Jowers, who started The Dance Enthusiast. Christine was looking for young writers at the time. That was in 2011, and I’ve been writing for Christine since. My position grew, and I’m now an administrator as well as a writer at The Dance Enthusiast. I write for Dance Europe as well.

How would you characterize the kind of writing you do?

I generally only write reviews at Dance Europe but, at The Dance Enthusiast, there’s lots of room to experiment. Though we do reviews, we also write video and preview features, Q+A’s, and what we call “The Dance Enthusiast Hits the Streets.”

One thing I should clarify is that now I do get paid to write. Both The Dance Enthusiast and Dance Europe pay its writers. In the beginning, however, when I was getting my feet wet, opportunities weren’t always paid.

What do you find most rewarding about writing about dance?

I become part of the history of the work that I’m seeing and writing about. I know that for an artist it can be kind of scary to let someone write about your work, especially if you’re new to dance-making or haven’t had great coverage in the past. But it’s such a gift to be able to witness and weigh in on art marking. We all know dance is ephemeral, so I think it’s important to archive the form in a permanent way. That doesn’t mean my opinion is the only one that matters or that it’s the “right” one. But it is one of the renderings that will live on after the dance has stopped.

What are some frustrating aspects to writing about dance?

There was a piece in The Atlantic last year that basically said dance writing is dead. I agreed with some of the points in the article, but felt it didn’t acknowledge the swath of writers who work for blogs and online publications. Just because you don’t write for The New York Times doesn’t mean you’re not a good, legitimate writer.

So many dance artists want coverage, especially for the purpose of getting grant funding, that they are generally supportive of all types of writing. But sometimes it does feel like there’s a hierarchy in terms of what kind of publication is most valued. Of course, I read The New York Times, and I understand it gets eyeballs that The Dance Enthusiast, for example, doesn’t for a lot of reasons: it’s general interest, it’s daily, it’s a historic journalistic institution. But I do think there is good dance writing out there that goes unappreciated to a certain degree. Maybe this will change with time as online publications continue to proliferate.

What does the face of dance writing look like from your vantage point?

The blog/online presence continues to grow, but people, whether its writers or artists, are exploring new ways to tell dance stories. Utilizing video or Instagram to tell stories seem to be increasingly popular.

There are also arts organizations and institutions that staff writers. The job goes beyond marketing, and might include writing articles about the artists or performances being presented, or trends in the field.

I think people are doing more of what you’re doing with Stance on Dance or what Christine is doing with The Dance Enthusiast, venturing out on their own.

Because you also dance, have you experienced any conflict being both a dancer and a writer?

I think at more traditional publications, editors want to have a clear divide in terms of conflict of interest, which I respect. But at The Dance Enthusiast, many of us are or were performers. And I see our practitioner experience as an added benefit to our writing. We know what it feels like to dance and move. When we cover people who we know (the dance world is so small even in New York), we are doing it in such a way that is transparent or that our relationship gives an interesting context to the story.

In terms of myself making work, it’s more challenging for me as a dancer to get coverage in New York. However, I’m not sure if I’ve made work yet that is ready for a formal review. I understand the enthusiasm that new artists have, but sometimes I’m curious if they really want coverage at this early juncture while they are still developing their voice. It’s not that I personally am so precious about my work that I don’t want feedback, but there are many ways to be given constructive criticism without a review.

I sometimes wonder if other artists see me more as a writer than as a performer, but I think it’s probably more of my own sensitivity than anything else.

As a dancer and writer, what larger trends have you noticed in the dance world?

It’s very difficult to make dance in New York City because of resources and expenses. This is anecdotal, but I believe artists are finding ways to make work that requires less, whether that’s a longer rehearsal process with less shows, a structured improvisational performance that requires less rehearsal, or working with a smaller cast of dancers.

Given how few people write about dance, what do you think could be done to make writing about dance more viable?

It would be great to see more foundations fund dance writing. There are a few but, at least at The Dance Enthusiast, we have only been funded by foundations for work that isn’t actually writing. We also need to communicate on a broad scale that dance writing is valuable. I think most dancers know that, but the average person doesn’t necessarily. It’s a bigger issue of how dance is valued as an art form.

I think what audience members say is important. At The Dance Enthusiast, we have a feature called “Audience Reviews” that people are starting to utilize more. Audience perspectives are something we should value and make space for.

Dance writing is hard! I try to be sensitive toward the artists, but also be honest. I tell the truth that I see in front of me, but realize I could be missing something. It requires so much concentration. 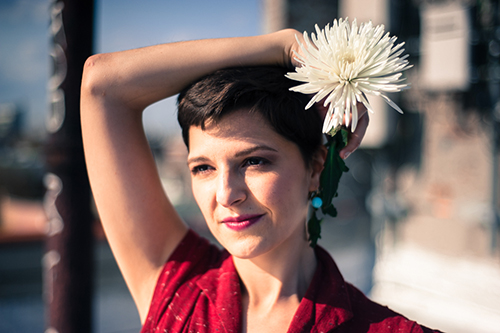